In 1942, Admiral Nimitz, who commands the Midway fleet in the Pacific Ocean, faces one of the greatest challenges of his life. The Japanese fleet of more than 180 ships is steaming towards Midway.

The aircraft carriers are equipped with enormous air support. After the lost battle of the Americans at Pearl Harbor, Midway is the last military stronghold of the Americans in the Pacific.

When the Japanese take midway, they are the rulers, and they get a free hand in a huge area. The admiral had only a small fleet of ships and some squadrons of planes to attack, a lost battle you'd think. However, several exceptional decisions were made by Admiral Nimitz.

3 rules how to play the game of self-organized teams learned from Nimitz.

Nimitz invented new rules of the game to let self-organized teams flourish. His lessons would create some of the fundament of modern leadership.

At that time, it was normal for the commanders to decide from the ground where the planes were going and who or what to attack. There was intensive consultation between the pilot and the command center.

The commander eventually determined how the battle would proceed. With an overwhelming power in his sights, Nimitz decided to give his pilots a free hand and to send them into the attack with a few simple arrangements:

This turned out to be a masterful find because there was unique self-organization between groups of pilots who were of course much better than their commanders at overseeing what was needed on the battlefield.

The Americans defeated the Japanese fleet and - partly due to several other factors - this battle today is still a textbook example of how a minimal set of rules stimulates self-organized teams. 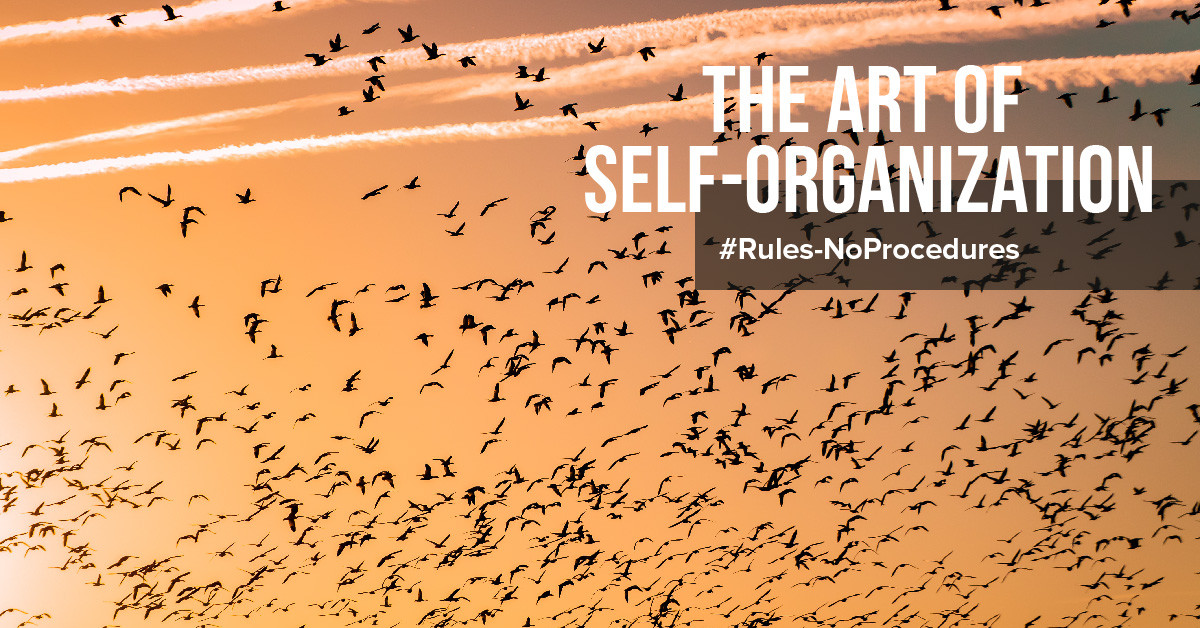 Simple rules of the game, but no procedures when it comes to self-organized teams

In nature, there are many examples of self-organized teams generated by just a few simple rules of the game. The flight pattern of a swarm of birds, for example, looks very complicated but can be reduced to a few simple rules in computer language.

Each 'boid' (small group as a whole) functions as an independent unit but is guided by a set of the same rules. If the group encounters an obstacle, each 'boid' makes an independent decision on how to apply the rules within the current circumstances. As a result, the whole group successfully flies around the obstacle.

Freedom of movement at each level reduces the degree of 'control' exercised by the leader but increases the resilience and creativity of the individuals within self-organized teams.

Daniel Pink and the motivation of people within self-organized teams

Author Daniel Pink wrote his best-seller Drive about The Surprising Truth About What Motivates Us. Different than most people think, is it not great leadership that gives us the drive to do things. It's something from the inside that makes us motivated.

The research of Daniel Pink shows that people are intrinsic, motivated by three simple factors:

1. Autonomy - We like to do things the way we think it's good

2. Mastery - We want to become competent in the things we do

3. Purpose - The things we do have to have some kind of purpose

Leaders who facilitate these three simple motivating factors within self-organized teams are proven to gain more effectiveness and results.