Technology changes faster than we can adapt

Technology is developing faster each year as we reach our maximum adaptability. That's nothing new because it's been going on for years. What is new, however, is that we all seem to be deciding to put older and older CEOs at the helm of our companies. Older CEOs who, because of their age, have even more difficulty understanding or embracing technological evolution. 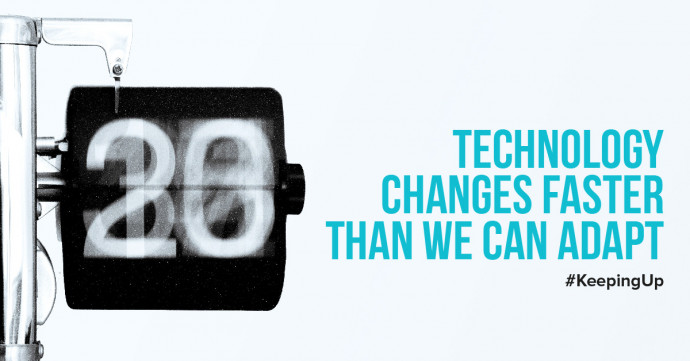 Since 2012, the age of the average CEO has risen from 45 years to 50 years. A 2017 survey by Crist Kolder among 673 leading companies in the Americas shows this.

The average age of the CEO is getting older

Of course, not every company is put under the same amount of pressure by technological development, and not every CEO needs to know everything about it. But, remarkably, the person with final responsibility for a company is getting older and older.

As we get older, our adaptability to deal flexibly with (technological) changes decreases. Flexibility and knowledge that are necessary today to ensure the continued existence of a company.

A good CEO obviously listens to his employees and will adjust his decision-making accordingly. But how can you decide on something you don't know or understand?

Worldwide, the big retail giants are dying out en masse. Usually, there is a press release that the killing competition on the Internet has made it impossible for them to cope.

If that were true, they should have responded in time. But that doesn't work with a dinosaur in charge who wants everything to stay the same. The E-commerce manager who could have made a difference years ago now works for a profitable online competitor. And his successor is trying to keep up with the competition with a tremendous pace of catching up. Without success, of course, because it is already too late.

Usually, however, it's not the competition on the internet that causes the giants to collapse. It's lack of technological innovation.

Lack of technological innovation is the culprit

Every day new developments are going on that a company can take advantage of and that allow them to stay ahead of the competition. Startups benefit from this. The CEO who wants to keep everything as it is will lose his business.

The traditional CEO first wants a small pilot. He first wants to see proof that something works. This is how he used to do it, and it used to work. That is why he is now CEO. Supported by the equally old and cumbersome CFO, he is slowing down technological progress, which is already going faster than it can be kept up to date.

There is simply no time to make improvements with small experiments. As soon as the experiment has proven to be successful after six months, it should already have been fully implemented.

The times of the rise of the Internet have ruined many businesses.

At the end of the nineties, everyone knew that the Internet was THE NEXT BIG THING. Yet many CEOs kept claiming it was a temporary thing. Their company did not need that.

Facebook and all those other childish platforms were indeed not suitable to keep the family business alive. Let alone using other social networks. Leave that to the youth; we just do it our way.

Mr. Bezos had to laugh about it back in the late 90s. He started in 1998 and is now lord and master in the E-commerce world.

The Next Big Thing is video calling. Sending e-mails and text messages will soon be a thing of the past. Everything will be voice and video. "Hey, Siri..." is what young people grow up with. Hoping that his secretary will bring the fourth cup of coffee, the average CEO probably won't get any further than 'Hey, Jane...'.

One in four Americans report having business contact with a company on average once a week via a live video link. A multiple of them would prefer this more often. But how many companies see this as unnecessary innovation and luxury and cling to their anxiously hidden telephone service center?

Will all these companies miss the boat again by not responding to voice and video applications? Or will they first do a small experiment so that the competition will once again surpass them?

What are the latest technological developments?

The number of technological developments to take into account can no longer be counted. Besides, it differs per company in which innovations can make a difference. However, several significant developments will affect our lives and those of all companies.

Google is fully committed to voice search that gains a lot in popularity. Not what you type, but what you say will deliver the results you're looking for. There are rumors that in 2020, 60% of all searches will be based on your voice. The certainty is that voice search will prevail.

Voice calls, SMS, WhatsApp, and E-mail will be used much less for communication. These are handy ways to register appointments or send large documents. It is becoming more and more normal to call someone directly via video calls. This way, you avoid miscommunication, and it is "the best next thing" instead of face2face contact.

In the old days, you used to have a physical store. You bought something and sold it with a little margin. That's out of date. Platform working and thinking means you have a combination of a site, app, or physical location, where you offer products or services that you don't have to purchase. It's only when you sell that you pay the purchase costs and withhold a small margin.

All social media platforms offer ways to sell products and services. As a result, they lose some of their value and the reason why people joined in the first place, but due to their reach to potential customers, these channels should not be underestimated.

Borders will no longer exist when it comes to offering services or products. Technology allows us to offer all our services and products anywhere and to anyone. Also, the demand will no longer come from your own environment but from all over the world.

Both augmented reality and holographic projections are becoming increasingly realistic and versatile. They are no longer techniques that are exclusively meant for a new game experience. Fantastic presentations of products and new applications for education are taking off. There will be (online) shops with an infinite assortment that can only be seen through virtual reality or holography.

AI is the seemingly invisible technology that makes software 'smart'. It enables cars to drive autonomously, and software can predict purchasing behavior, for example. AI also allows the software to improve itself.

Blockchain technology is mainly known from the cryptocurrency. The technique distributes certain information to users, making fraud practically impossible. This makes it possible, for example, to verify diplomas or contracts. A multitude of applications will be invented in which fraud and abuse will be banned.

Video calling and video conferencing contribute significantly to being able to work remotely. As a digital nomad, you can travel and work at the same time. The standard of working 8 hours a day between nine and five no longer exists and has proven to be ineffective. Employees turn out to be much more effective and loyal when they are allowed to choose their own working time and workplace.

Logistics still seems to be tied to the motorways and truck drivers. It won't be long before drones and robots take over. But also increasingly complex tasks within a company or household will soon be taken over by robots. Don't you feel like walking the dog or doing the dishes? Your personal robot will be happy to do it for you.

Large complex and cumbersome logistics and management systems losing out to systems developed based on technology agnostic. These systems make use of different technologies that are specifically intended for a particular application. It keeps systems much simpler, faster, cheaper, and up to date without having to modify the underlying structure of the system.

A CMS (Content Management System) ensures that the content you have is available within different (media) channels. It means, for example, images, product descriptions, and prices. A headless CMS ensures that this content is not distributed as a full-page, but as raw data via a so-called API. The media itself determines the form in which it is presented.

We haven't gotten to the point where we can read minds with a computer. It is, however, already possible to control a computer with your brain and developments are going very fast. Simple video games can already be played by just thinking about something. It is also already possible, for example, to maneuver an electric wheelchair by using only thoughts.

IoT (Internet of Things) was supposed to be the new technological revolution years ago. Even though you don't hear much of it, this prediction has come true. IoT means that all - or many - electronic devices are connected via the Internet and can communicate with each other. For example, your fridge knows that the milk is almost finished and sends your drone to fetch new milk from the local milkman. (Provided, of course, that he is not already connected to your refrigerator and sends his drone with fresh milk).

Print your own house or barn. Or have your (vegetarian) meal printed. 3D printing is booming. It won't be long before everyone has a 3D printer in their house and buys a 3D printing instruction instead of products.

Recognizing someone by his fingerprint is already possible for a very long time. Nowadays, computers connected to a camera can also recognize someone by biometrics on their faces and even the way they walk.

When a customer comes into a shop for a second time, a name and his purchasing behavior automatically appear on the screen. This way, you can serve the customer much better. Computers will also recognize whether someone is behaving strangely in a shop or a busy location.

While some people in the west are looking forward to the launch of 5G, in many places in the world, there is no (fast) internet yet. Elon Musk, Google, and many other individuals and companies are trying to change this rapidly. Offering the Internet everywhere in the world will create whole new markets that were previously inaccessible.

Auto translators translate fluently and instantly words you speak or type into any language you want. Are you used to have trouble or hesitation in contacting someone who doesn't speak your language? Everyone around the world will now understand you thanks to auto translators. That makes doing business internationally or making friends a lot easier.

PA (Personal Assistant) automation is a range of personal and household equipment that will serve you day and night. Your Smartphone tells you that you should take more steps and your SmartWatch measures that you should take more vitamin C. But that's just the beginning of PA automation, which is already being used by many people. Soon PA automation will measure, for example, an emerging depression or a shortage of social contacts.

Big data is the available structured and unstructured information from different sources, from the past and present, that leads to insights about human behavior and interaction, among other things. It is called big data because the amount of data is so immense that only computers with smart algorithms can come to conclusions. Big data enables us to make predictions that were not possible until recently. Big data also contributes to self-learning software.