This can be learned from professionals | Never give up

Yesterday Ajax played the semi-final of the Champions League against Tottenham. Ajax, who dominated the tournament from the very first match with unprecedented elegance, was the big favorite. Not only because of the magical game they played, but also because two clubs played against each other that are not comparable in terms of budget. Ajax, the underdog with a tight budget and Tottenham who has that much budget that they can buy any player in the world and has bought it as well. Tottenham even bought some of the best Ajax players. 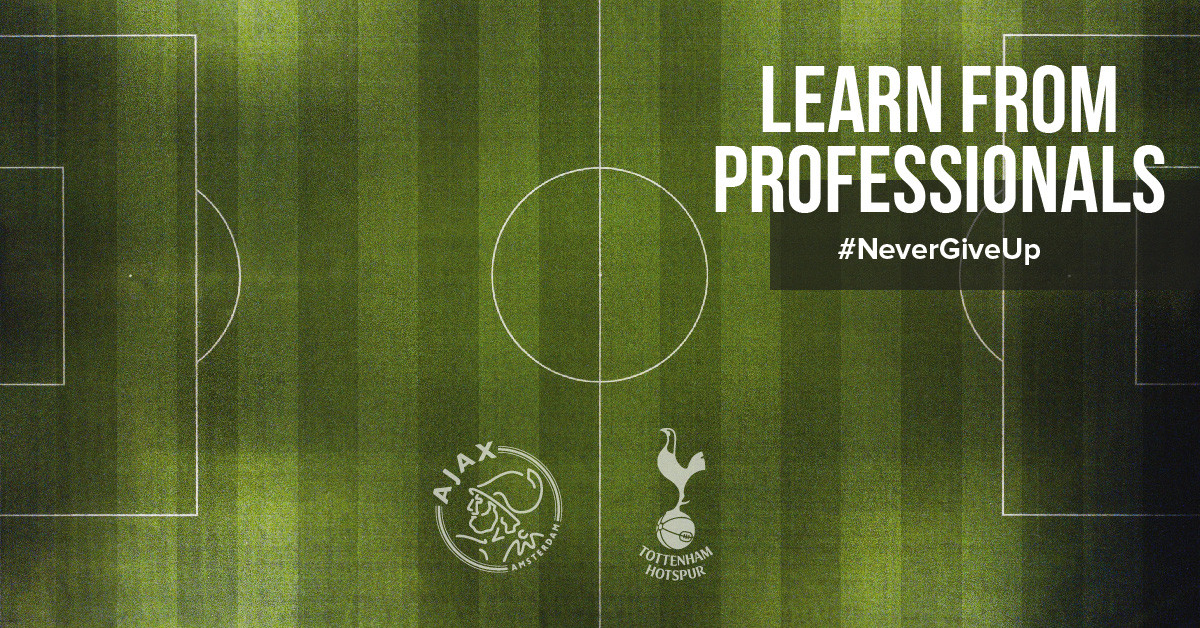 Winning doesn't seem difficult when you're in the lead

After twenty minutes, Ajax was in a 2-0 lead, and half of the Dutch supporters were lazily hanging back in their seats knowing that the victory would only be a matter of waiting for the final whistle. When a counter goal was scored in the second half, some of them got a bit restless.

But Tottenham had to win 3-2 to get into the final, so there was no reason to panic yet. Only towards the end of the game when a second counter goal fell, and the standings were 2-2, the Ajax supporters started to behave uncomfortably. With less than 10 minutes to go, it was going to become an exciting game, but what are the chances that a third goal would be scored in the last 10 minutes?

After 90 minutes, the referee decided to add 6 more minutes of injury time. You could see the players running tired around on the field, and the victory for Ajax was now almost inevitable. With 10 seconds left, many wanted to cheer, and the beer in the pubs was already flowing in abundance. Another 7 seconds, another 6 seconds, another 5... And all of a sudden everyone in the Netherlands was stunned. Tottenham scored!

What no one had thought possible had happened after all — 2-3 for Tottenham by scoring a goal in the last 5 seconds. Ajax players fell to the ground like a block, and supporters rubbed their eyes as if they woke up in a bad dream. How could a 2-0 lead turn into 2-3 in the last 5 seconds?

What can we learn from winners?

Yesterday's victory is about more than 11 players attempting to kick a ball into a goal against 11 other players. What was shown yesterday is real mental strength and mentality. The seemingly invincible Tottenham had been blown off the field a week earlier by Ajax with 0-1 in their home stadium.

This time it was the home stadium of Ajax which always gives an advantage, and within 20 minutes Tottenham was already 2-0 behind. They were defeated, humiliated, and ready for the headlines that the Dutch club from Amsterdam had completely slaughtered them. But Tottenham did not give in. They continued to fight. The battle was only over when the last whistle had been blown.

Every player of Tottenham has shown the world that you should never give up. If the chance is less than a promille, there is still a chance that the tide can turn. Not by sitting on your lazy ass, but by using all your talents, knowledge and skills. By remaining optimistic and seeing opportunities.

Tribute to the trainers of Tottenham. Tribute to the coach(es) but especially tribute to the mental coaching that made these guys realize that hope, optimism, and perseverance can lead to one of the most unexpected results in the history of football.