Did Nokia go under due to a lack of vision?

The once all-powerful Nokia dominated the mobile telecom market with a market share of almost 50%. There are voices that they have lost their entire market share due to the rise of Apple, Google, and Samsung. Unfortunately, the cause is not external, but internal to Nokia. As described in the book "Ringtone: Exploring the Rise and Fall of Nokia in Mobile Phones" by Yves Doz and Keeley Wilson, Nokia fell apart long before they entered the market.

But as Nokia's management says: "We didn't do anything wrong, but we lost the battle because of something". Where have we heard before that it's obviously not the management's fault? 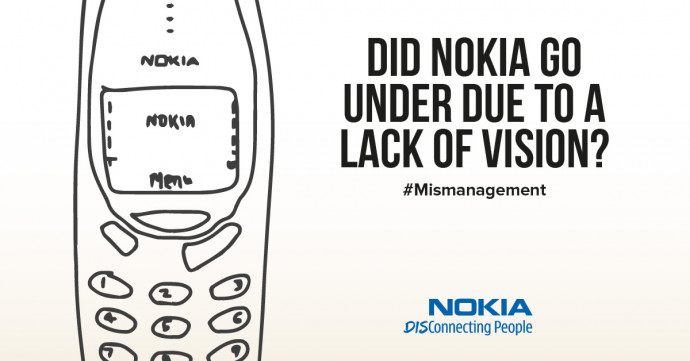 The rise of Nokia

Nokia was founded in 1865 by Fredrik Idestam and owed its name to the Nokianvirta River in Finland along which the company was located. The company started with wood pulp mills, but the smart entrepreneur quickly expanded its activities and began to operate in the rubber and cable industry.

Thanks to an acquired contract from the government during the Cold War, they became prominent in telecommunications. In the 1980s, thanks to the knowledge they acquired, they were pioneers in the field of mobile telephony. When even Gorbachev was photographed using a Nokia mobile phone before the fall of the iron curtain, the brand began to gain a name.

In 1992, Jorma Ollila was appointed as the new CEO and changes course. All activities that are not related to the telecom industry are divested, and from then on, all arrows are focused on mobile telephony. They must and will become the leader of the industry.

The success of Nokia

The success of Nokia does not seem to stop. The bestseller after the bestseller comes on the market like the Nokia 2110 in 1993, the first with an address book. In 1996 the Nokia Communicator was the first to feature a keyboard, fax, a word processor, spreadsheets, and even e-mail. A true revolution in those days.

Many people also remember the famous and almost indestructible Nokia 6110 equipped with the game Snake. And in 1999, they launched the 3210 that made mobile telephony affordable for young people.

The money flowed into the Finnish company, and sales figures broke record after record. Nokia was one of the most well-known companies of its time and the showcase for innovation and entrepreneurship.

Success continued, and in 2005, when mobile phones were equipped with cameras, Nokia was the number one brand in the field of digital photography.

Where did things go wrong with Nokia?

But most of all:

Fear-driven mismanagement and arrogance at Nokia

As early as the late 1990s, Nokia realized that it is not the hardware but the software of a mobile phone that makes the difference. That's why they used Symbian as their operating system. They were striving for the best of the best, and there was no shortage of development budget. In 1995, Nokia made a profit of 1 billion, and this rose to 4 billion dollars in 1999.

But the success seemed to rise over the top of the company, and the management style is described by many old employees as aggressive and fear-driven. Symbian didn't work at all as well as the techies would like to keep innovating. But whoever told that to the board of directors could suddenly find themselves out on the street.

Nokia's strategy was also to introduce new 'innovative' versions of the mobile phone to the market ever more quickly. As a result, due to lack of time, dozens of incompatible Symbian versions were created, all of which did not work ideally.

In early 2000, Nokia experimented with various game phones, camera phones, and all kinds of futuristic designs, but the feedback from the media was invariably the same. Cool design, but a worthless user interface.

In 2005, Nokia was already aware that an Apple iPhone would be introduced and that Google would bring an Android device onto the market. Arrogant as they were, they didn't see any threat in this. They even had a concept like the iPad on the shelf but saw no need to market it. Nobody could beat the big giant Nokia by far.

The introduction of a new generation of mobile phones

Before the iPhone was introduced in 2007, Nokia's management was certain that it would be a flop. The price was far too high for the average consumer, and their N95 could do everything the iPhone could. On the day of the introduction, when people were queuing up in front of the Apple store to get one, Nokia had to change its mind. Especially since the media did praise Apple's user interface.

Due to the disappointing results, CFO Olli Pekka Kallasvuo had been appointed as a new CEO a year earlier in 2006. He would turn the tide and solve all Symbian problems. It is said that internally, people would like to have an Android operating system, but Olli would have said: "Android on a Nokia is like peeing in your pants in winter to get it warm." It would be the wrong short-term solution.

When Google successfully introduced its Android smartphone, it was actually too late to turn the tide. The answer to Apple and Google was the Nokia 5800 Express Music Phone. Even though it was a commercial success, this phone was also criticized by the media for its user interface.

If this had been all, Nokia might have had another chance. The point is that they missed another opportunity. Apple and Android had worked hard in the background to fill their App store. A Smartphone without apps has little value. Nokia knew this. That's why Nokia already introduced an App store together with Symbian. However, six months after its introduction, there were only 60 apps available, of which you can discuss the quality.

The only person who could have done anything to stop the now unfair competition was perhaps the former vice president and head of design Frank Nuovo. Unfortunately, he had also resigned alongside many colleagues in 2006 because, in his words, the company was more concerned with keeping their position than with innovation. The hiring of Kallasvue was for him the last drop in the bucket.

Things go from bad to worse at Nokia

If you think you can't sink deeper because of mismanagement, arrogance, and lack of vision, Kallasvue managed to make things worse for himself and Nokia. He decided to stick to Symbian - who pees his pants in the wintertime? - and also ordered the development of a second operating system called MeGoo.

If there was no fear and struggle within the company, this was the final blow. The two software development teams now had to make not only the best software but also fight each other. This has never made a company any better.

In 2008, Nokia started working with Qualcomm, the world's largest processor developer. Paul Jacobs, Qualcomm's chief executive, once said that he understood why Nokia went down. When he presented a new technique that could give Nokia a significant competitive advantage, they sometimes spent nine months investigating whether they wanted to take advantage of the opportunity. That's at least 8.9 months too slow in such a rapidly developing market.

Nokia is going to cooperate with Microsoft

In 2010, Steve Elop took the seat of Kallasvuo. Nokia's market share is now negligible, but the old Microsoft man is going to do something about it. The R&D budget is now 4 billion dollars a year, which is equivalent to 30% of the value of the entire telecom industry, so that should be okay.

Like a rabbit out of a hat, in February 2011, it was announced that Nokia would collaborate with Microsoft. Symbian and MeGoo have to make way for the former colleagues of Elop, and from that moment on, Nokia is only a hardware supplier.

When that didn't turn out to be a success, another rabbit came out of the hat. On 3 September 2013, Nokia was sold to Microsoft for 7 billion euros, only to be phased out by Microsoft less than a year later. The fact that former Microsoft employee and top executive of Nokia Steve Elop personally made 18.8 million from it remains for many suspicious. Could there have been a deliberate intention in the game?

Nokia is back on the map

At the end of 2016, the Finnish company HMD Global was founded. They acquired the trademark rights of Nokia and, with a small team led by Florian Seiche, brought nearly 20 new Nokia models to the market.

The company rapidly opened 50 offices around the world, and with just over 500 employees, they are not unsuccessfully trying to get life back into the soul of the Nokia brand. They are now the 5th largest producer of Smartphones and have the ambition to grow. If they make sure they don't make the same big mistakes in the management of the old Nokia, they might even be able to do it, because the consumer hasn't forgotten Nokia's Power.

Nokia, connecting people. Unless it's about their employees.

Author Bio: Ben Steenstra is Co-founder of TheONE and writes on various topics such as SEO, Strategy, Leadership, Marketing, and Communication.