42 successful dropouts that have changed the world

Most people know that the successful Steve Jobs, Bill Gates, Richard Branson, and Mark Zuckerberg are early dropouts. They were the rebels of their time who believed they could change the world. Education was a useless waste of time that prevented them from fulfilling their real dreams. 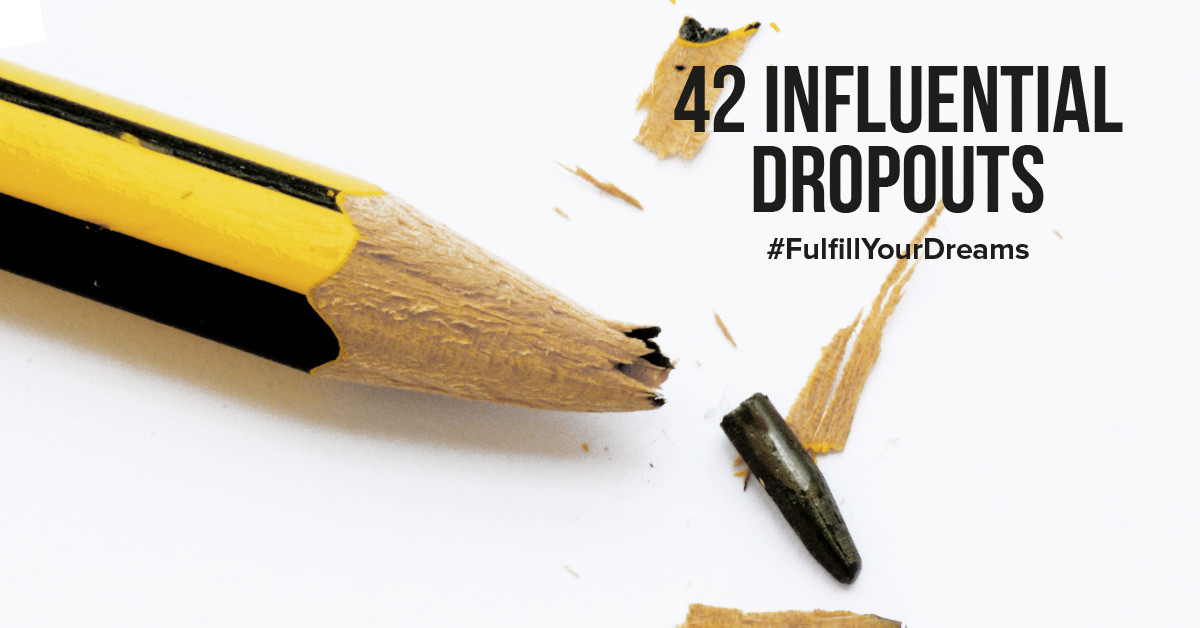 When you look at the founders of today's top companies in the world, it appears that business success has nothing to do with education - or our current education system. In fact, the list of successful entrepreneurs without education is so extensive that you can almost say that our education system could be an obstacle to success in business.

In the field of music, acting, writing, fashion, science, and even the American presidency, education does not have to play a role either. See below for a random list of 42 well-known names of successful people who haven't completed their education. Also, read how they express what they think about education in their own quotes.

The minute I dropped out I could stop taking the required classes that didn't interest me, and begin dropping in on the ones that looked interesting.

2. Bill Gates - Microsoft - stopped after two years at Harvard University. After 30 years, he was awarded his university degree.

3. Richard Branson - Virgin - At the age of 16, he quit his high school to set up a student magazine. Remarkably, he had dyslexia.

Education doesn't just take place in stuffy classrooms and university buildings, it can happen everywhere, every day to every person.

4. Mark Zuckerberg - Facebook - stopped after two years at Harvard. Just like Bill Gates, he received his honorary doctorate after 13 years.

Move fast and break things. Unless you are breaking stuff, you are not moving fast enough.

Don't be afraid to give up the good to go for the great.

6. Walt Disney - Mickey Mouse - dropped out of McKinley High School in Chicago when he was 16. It was only after the third short film about Mickey Mouse that the cartoon became a success.

If you can dream it, you can do it. All our dreams can come true if we have the courage to pursue them.

7. Michael Dell - Dell - quit his education at the age of 19 at the University of Texas.

There's always an opportunity to make a difference.

8. David Karp - Tumblr - quit his education at the age of 15 at the prestigious Bronx High School of Science.

Good products are built by people who want to use it themselves.

9. Joe Lewis - Tavistock Banqueting - quit his education when he was 15 and is now worth more than 5 billion.

We can afford almost any mistake once.

10. David H. Murdock - businessman and philanthropist - quit his education, went to work at a gas station, and is now worth more than 3 billion.

Success isn't something you achieve by accident, but rather by design.

11. Ray Kroc - McDonald's - quit his education as a teenager because he no longer had the patience for school and went to work as a salesman.

Luck is a dividend of sweat. The more you sweat, the luckier you get.

12. Evan Williams - Co-founder Twitter - quit his training at the University of Nebraska after three semesters to become a freelance programmer at HP.

My life has been a series of well-orchestrated accidents; I've always suffered from hallucinogenic optimism.

13. Julian Assange - WikiLeaks - quit his education at the age of 19 at the University of Melbourne.

To keep a person ignorant is to place them in a cage.

14. Larry Ellison - Oracle - quit his training at the University of Chicago where he should have become a doctor under duress from his parents. He is worth more than 55 billion.

When you innovate, you've got to be prepared for everyone telling you're nuts.

15. Jan Koum - WhatsApp - stopped just before he had to take the exam.

I want to do one thing and do it well.

A lot of hard work is hidden behind nice things.

17. Henry Ford - Ford Motor Company - has never been in school.

Take the best that exists and make it better.

For God's sake build not your faith upon Tradition, it's as rotten as a rotten Post.

Anybody who thinks money will make you happy, hasn't got money.

21. Barry Charles Diller - Fox Broadcasting Company - quit his education at the University of California after one year.

I've always said that I believe deeply in creative conflict, and that means passionately arguing-whatever your thoughts are, whatever the point is.

22. David Ogilvy - Ogilvy - was expelled from Oxford University when he was 20.

The best ideas come as jokes. Make your thinking as funny as possible.

23. George Eastman - Kodak - dropped out of high school when he was thirteen.

The progress of the world depends almost entirely upon education.

Without rain, there is no life.

25. Joyce C. Hall - Hallmark - didn't go to school and started selling tickets when he was 18.

Time is everything. Anything you want, anything you accomplish - pleasure, success, fortune - is measured in time.

That's why I ended up leaving school - because it required so much time, and it was such an excellent idea. I figured I would regret not going full force with this idea. It seemed we could make something of it.

27. Colonel Harland David Sanders - KFC - started working when he was 10.

I've only had two rules: Do all you can and do it the best you can.

There is only one cause of unhappiness: the false beliefs you have in your head, beliefs so widespread, so commonly held, that it never occurs to you to question them.

29. Matt Mullenweg - WordPress - quit his education at the University of Houston when he was 20.

If you want to be good at something, you really have to work at it every single day.

It's not that we need new ideas, but we need to stop having old ideas.

Only those who are asleep make no mistakes.

32. Steven Spielberg - Known from E.T. and Jurassic Park - quit his training at the University of California. After 37 years, he handed in a thesis and graduated.

You shouldn't dream of your film, you should make it!

It is our choices... that show what we truly are, far more than our abilities.

When people ask me if I went to film school I tell them, 'no, I went to movies'.

36. Aretha Franklin - Respect & Think - stopped at the age of 15 to take care of her first child.

Sometimes, what you're looking for is already there.

The biggest adventure you can ever take is to live the life of your dreams.

38. Benjamin Franklin - Founding Fathers of the United States - Co-author of the American Declaration of Independence and the Constitution - went to school until he was ten years old to work with his brother as a printer. He is also the inventor of lightning conductors.

39. Abraham Lincoln - U.S. president - quit after one year of training to teach himself trigonometry.

Be sure you put your feet in the right place, then stand firm.

40. Andrew Jackson - U.S. President - did not receive any training, but started to train as a lawyer at the age of 35 by studying independently.

I've got big shoes to fill. This is my chance to do something. I have to seize the moment.

41. Orville and Wilbur Wright have never been educated.

If we all worked on the assumption that what is accepted as true is really true, there would be little hope of advance.

Two things are infinite: the universe and human stupidity; and I'm not sure about the universe.