How do you stay motivated to do or achieve something?

"If you want to become something, you first have to be."

It sounds vague and philosophical, but in essence, it is very practical and applicable. Staying motivated to do or achieve something costs energy. To get that energy over and over again, it is very useful to teach yourself a number of mental skills. For example, you first have to be someone before you can actually become it.

This has everything to do with your identity and, as a result, your attitude, how you experience the world, and what choices you make as a result. 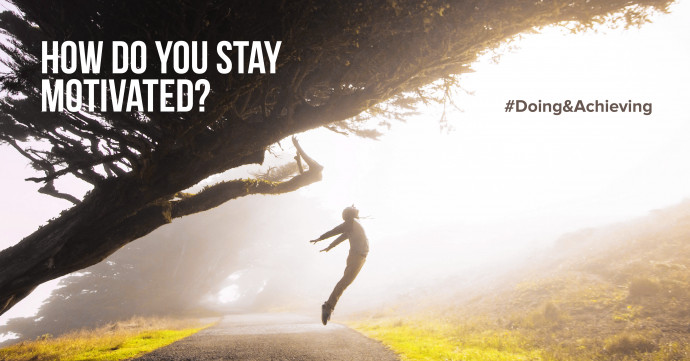 Adopting the attitude of an entrepreneur

At a young age, I started a very successful advertising agency. I used to be a house painter and thought I was ready to become an advertising agency entrepreneur. After all, I had all the knowledge, and not only was I ready for the world, the world was also ready for me. At least that's what I thought.

I had, as it were, adopted the attitude of an entrepreneur and started building my advertising agency without hesitation.

Mistakes I made were dismissed as additional problems, and setbacks were part of entrepreneurship. Because that is how I had learned that the attitude of an entrepreneur would look like. Making a lot of mistakes and learning quickly to fix them.

Of course, this was a form of overconfidence that fortunately is not for everyone, but my attitude did help to carry on. It was not until much later that I understood what was behind this. I had adopted a new identity.

Identity is important to keep motivated to do or achieve something.

When I talk about being something to become something first, this is about your identity. The self-image you have about your own image and being. If you want some change in your life, then it is useful to realize that you can change your identity and that this has consequences for the choices you make.

Adopting a new identity to achieve something

At a young age, I was doing a lot of sports. Four times a week 10 miles running, six days a week at least 2 hours on the tennis court, four days a week Hockey and sometimes a game of Squash. Besides that, I sometimes played street soccer with my friends, and in between, I pulled myself up to grow more muscle mass. I felt really fit. A real 'sportsman.'

Because I felt like a sportsman and had adopted that identity, I knew by nature that I had to get enough sleep and eat healthy food. If I didn't do that, my performance would decrease, and a real sportsman would want to win. So I could not afford to perform less.

I barely even had time to learn. Because of the lack of my identity as an ideal student, I had never measured up to myself. I was a life enjoying sportsman.

The unlearning of your identity to achieve something

When I started my advertising agency around the age of 20, I switched from being a sportsman to a businessman—the ideal entrepreneur. Of course, an entrepreneur can do a lot of sports, but at the time, I hadn't attributed that quality to entrepreneurship.

In my opinion, an entrepreneur let himself be stopped by nothing and nobody, has to be flexible and creative in coming up with solutions and worked 24 hours a day, seven days a week. The sport wasn't part of that back then.

The result was that I gained at least 15 kilos in a year and shifted my focus completely to other things. For example, learning how to write a marketing plan and how to deal with customers. Food, sleep, and sports had all become of secondary importance. I had abandoned the identity of a sportsman and adopted a new identity as an entrepreneur, which gave me a lot of motivation.

When I felt myself a life enjoying sportsman, I was open, cozy, and friendly to everyone and busy with whether someone could become a potential sports buddy. In addition, health and physical performance was something I worked on all the time.

When I felt as an entrepreneur, I was constantly working on whether someone could mean something to me in business. Seeking and finding opportunities was priority number 1. In addition, self-development and study in my field were important. I understood that naturally by taking on the attitude of a businessman. My motivation was boundless when it came to performing in the business.

Change in being changes how you see and experience the world

As an enjoyable sportsman, I saw others as friendly and sociable. Until we practiced sport, then it was an opponent. But less than seconds after the match, it was all over again.

As an entrepreneur, I saw others as an opportunity or a threat. You have something to gain, or they can steal something from you.

Exactly the same people, but because of my change in identity and attitude, I saw them differently. Suddenly the world even became an opportunity or a threat. Something that I, as a life enjoying sportsman, hadn't even thought about.

By becoming someone completely different, the perception of how I saw and experienced the world changed, and that offers opportunities but is also a threat.

Change in being leads to making different choices

If you had asked me before I started my advertising agency if I would ever give up sports, I would have looked at you in a strange way. Sports was my lust and my life. You're not giving that up. Neither healthy eating and living. I had the greatest motivation for that.

Less than two years later, I could hardly motivate myself to go to the gym one day a month. Sports take time, and entrepreneurs don't have time. That was my conviction.

I chose pizza for 5 days a week. Preferably with lots of cheese and fatty Salami. To keep it up for another long evening, I wanted a couple of beers as well. The body was no longer important. It was my belief that as an entrepreneur, you choose to grow spiritually and in creativity.

I had learned from an early age that there is a relationship between a healthy body and a healthy mind that I was forgotten for the sake of convenience.

How can a change in identity help you stay motivated?

It took me 25 years and 25 kilos too much to realize that I am essentially still a sportsman. I had never thought before that you could be a life enjoying entrepreneurial sportsman. That's also an identity.

Believing that sportsman is part of who I am again doesn't mean that I'm 25 kilos lighter all at once. It does mean that I make other choices much easier. Choices that I take for granted for a sportsman.

If I were to set the goal of losing weight, this could be a long and arduous journey. You can't just get rid of this excess weight. But by realizing that I'm a life enjoying enterprising sportsman, I automatically know what's good for me and what's not.

I know what to do and what not to do, and I do it without effort. Not because I have to, but because it is part of my belief in what a truly life-enjoying entrepreneurial sportsman is like.

That's why it's useful to be first before you can become something.

This way, you will always be motivated to do what is right for you.

Listen here to the podcast: