It's an art to say exactly what we mean. It's impossible for the other person to understand you exactly. That is why it is important to ask for the question behind the question. But how does it work and why is it so important? 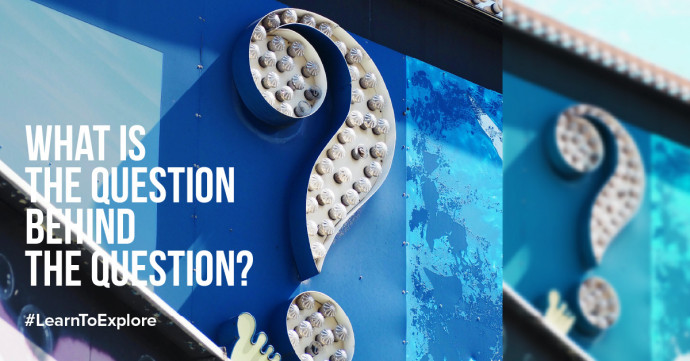 The call for attention can manifest itself in different ways

A couple argued more than once about different things. Usually, the central theme was how they could spend as much time together on housekeeping and upbringing. The woman felt that the man did too little and the man felt that he had too little time because of his work.

Whatever the woman asked her husband and however angry they got at each other, nothing changed. Until one day, they were together at a relationship therapist, and the therapist asked why the woman thought it was so important that the man would do more in the household.

The woman replied: "Actually, he doesn't have to do any household chores at all, because he works hard enough already. But if he would do something every now and then, he would know how hard I try for him, and I feel seen and appreciated".

"So if I understand correctly, you want to be seen and appreciated?" the therapist asked. "And are there any other ways your husband can show that he sees you and how much he appreciates you?"

The woman looked up and said: "Yes if he would give an occasional compliment on how tidy and clean the house is when he comes home from work late at night! But well, I also never compliment him on how hard he works to support our family."

Why is it so hard to say exactly what we mean

1. Assigning the same meaning to words

On average, people who speak a language know between 10,000 and 15,000 words. At first glance, it seems that there can be no misunderstanding about a word. But what does someone mean by the word clean up? Or, what is a cup, and what does it look like.

Every word we use still leaves a lot to the imagination. It's an indication of what we mean and not an exact science.

2. Assigning the same meaning to sentence structures and tonation

The sentence: 'I like to have something to eat when I get home' resembles the sentence 'When I come home, I like that I have food'. However, both sentences can mean something completely different. The first sentence can be taken as a compliment and the second as a wish or demand. Still, it is easy to use the wrong sentence construction accidentally or to interpret the sentence differently than the transmitter intended.

The tone of the sentence also makes a difference. The first sentence can be pronounced very sarcastic by using pitch and emphasis or very sweet and complimentary. Here, too, a mistake is quickly made - both by the receiver and the transmitter.

3. The ability to convey your real desires

Feelings, emotions and desires can be very misleading. Especially for ourselves. For example, anger is usually the result of grief or hurt, whereas, in such a situation, we tend to say that we are angry.

Asking if someone wants to do the dishes may be for practical reasons or because you feel that you are being taken care of. Most people choose to ask, "do you want to do the dishes" when they mean, "I would feel so appreciated if I didn't have to do anything after cooking and you did the dishes".

Pronouncing and questioning the need behind the need

Communicating takes time, and the less time we think we have, the more cryptic we express ourselves. 'Give me that bread!' is a clear and demanding question to fulfill your apparent need. But do you want bread, or is it really about wanting something to eat?

Do you really want something to eat, or do you have a moment of restlessness, and do you hope that food will make you calm down?

To express the need behind the need, we must be aware of the real need and take the time to communicate this to the other person. Also, the recipient must be interested in your needs and, by asking questions, assure himself that the question is well understood.

People who use very fluffy language are usually impatient people in a hurry. Fluffy language is, for example: 'It was pleasant', 'I want to go to a nice place', 'I want to have it enjoyable', etc. Pleasant, nice, and enjoyable are words that have no content on their own. What people who use woolly language assume is that the listener spontaneously has the same image as he themselves. They can even get angry if you don't understand them, while they don't take the time to say exactly what they mean.

For the listener, the only possibility is to continue asking to better understand what the person is asking or wanting to say. Because of the impatience, this can sometimes lead to irritation at the sender because answering those questions requires searching for words, and that takes time.

Coaches are generally very talented to get the question behind the question to the surface. By asking the right questions, the underlying need can emerge. Anyone can learn this through training and practice from communication specialists and coaches. Feel free to call a coach or communication specialist via the live video connection and ask if he can help. The first minute is free, and after that, you pay a fixed rate per minute.