Why do you seldom convince someone with facts alone?

Once someone is convinced of something, it turns out to be very difficult to change that person's mind, even with substantiated facts. Why do facts rarely work if you want to convince someone and what does work? 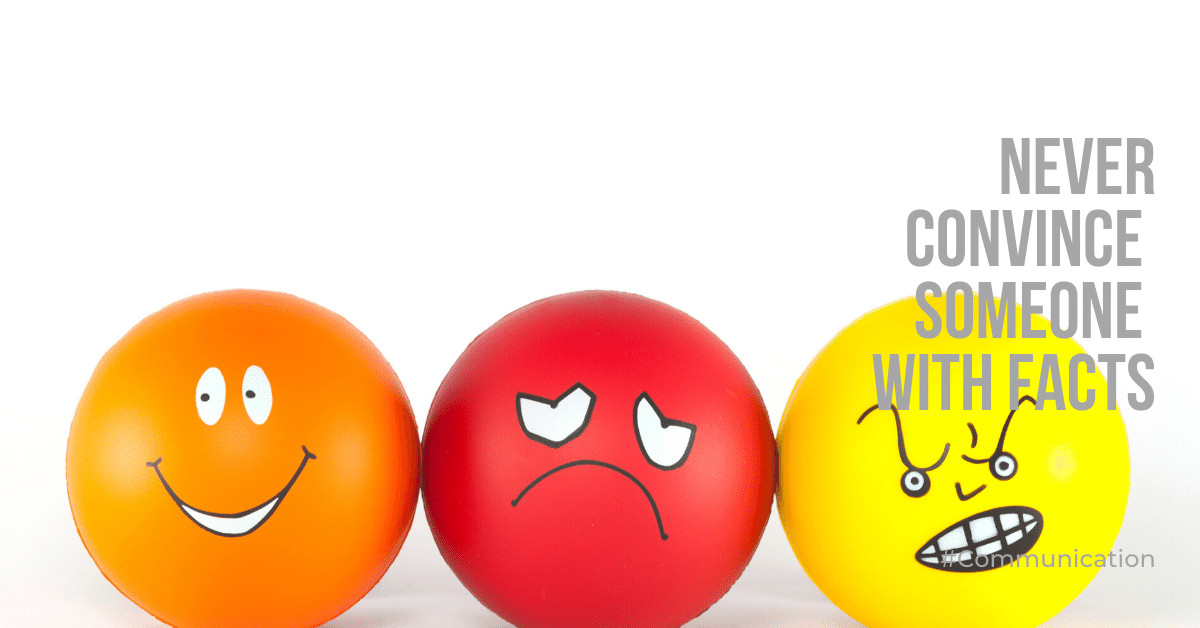 Even before the Corona era, the world was flooded with lies from the mouth of Donald Trump. That politicians lie is nothing new in itself, but Trump has made it a sport with an average of 22 lies a day. According to him, the media is all fake news, and what he says is true, even if the contrary is proven.

There are supporters of Trump known that even after watching a movie in which Trump tells a clear lie, they would rather believe the lie than face the truth. Why don't facts matter to these people?

During the Corona crisis, the world has been flooded with lies worse than ever. Governments claim without or based on vague facts at all levels that the virus is a true pandemic, and other independent highly regarded medical experts have proven with facts that the Coronavirus is less dangerous than the regular flu.

In this case, too, facts do not appear to be sufficient to change people's minds. So apparently something else is needed to enable people to recognize lies and disinformation and to change their minds.

People like to see confirmed what they believe in

It's not that people are lazy by nature, but a lot of people don't want to take the trouble to check information and facts. If an authority in their eyes says something, if the information feels right and if it fits within the beliefs the person has, then the information is believed to be accurate.

Another important factor that confirms the credibility of information is whether others also believe it. If the masses are convinced of something, then we are quickly inclined to accept the information for what it is.

An excellent example of the above is the question of whether Obama was born in America. The republicans were only too eager to believe the opposite because it fitted into their image of reality. Even when Obama's birth certificate was shown, many continued to believe that he was not born in America.

Precisely because of this, well-intentioned conversations about overcoming religious, ideological, or political differences often have a counterproductive effect. Instead of opponents finding common ground, they tend to become even more distant from each other.

How something is told has a huge impact on credibility.

A study carried out in 1973 showed how much influence the way something is told has on the listener. For this research, an actor was hired, who was announced as Dr. Fox. As a result, this research has become known as the Dr. Fox experiment.

Dr. Fox was supposed to be a game theory expert who was going to give a presentation to a group of 10 people who, unlike him, were experts in this field. Dr. Fox didn't really know anything about the subject and could only give a presentation based on nonsense.

With his talent as an actor, Dr. Fox was able to entertain and fascinate the audience for 20 minutes with the most nonsensical theories and unsubstantiated explanations. Afterward, the game theory experts were allowed to ask questions, each of which received a nonsensical but appropriate answer.

Afterward, the presentation was rated by the experts, and everyone unanimously agreed that it deserved a high rating. The experts were completely fooled by the way of presentation and had assumed the information for what it was without any factual reason.

The researchers concluded several things based on this research:

People would rather look for their right than their wrong

When people use a search engine to look something up, the information they find usually confirms what they already thought. This applies to both proponents and opponents of a certain conviction. This shows that this has nothing to do with the available information. Rather, we simply search for the kind of information that confirms what we think is right.

A good example of this is the information within the fitness and health industry. You follow a particular diet or workout and become convinced that this works best for you.

In the meantime, you meet people who think exactly the same way, and you look for information on the Internet that confirms why what you do is so effective. If you come across conflicting information, you ignore it or even laugh at it because, in your opinion, it is complete nonsense.

We prefer to believe only what we want to believe

On the Dutch street, satirical program makers addressed strictly Christian believers and asked for their opinion about Muslims. The program makers read from the Koran which contained texts such as:

"Do not allow a woman to teach. Then you must cut off her hand."

"If a man sleeps with another man, they must both be killed."

The reaction varied from "How can you believe in this", "If you're raised this way, you can never integrate into a social and liberal country like the Netherlands", and "Now I understand why the Muslims are so different".

They were also asked what, now that they have heard these statements, according to the Christian believers, the differences are between the Bible and the Koran. Here, too, the Christians were united.

"Muslims are much more violent and aggressive than Christians".

"The Bible is more peaceful and stands up for women."

What the strict believers Christians didn't know is that the makers of the program had bought a Bible and put a cover of the Koran around it. So they were literally texts from their own Bible, which they disgusted.

Despite this revelation, the image remained with the Christians that Muslims are worse than Christians.

Our brains invent truths to make us right

During an American study, Republicans were presented with a fake article from their favorite newspaper. A group of democrats received the same article. The articles contained statements with which they would agree in advance and written by their primary source of information they were confirmed in their right.

When the real article was submitted in which the belief was undermined, they could not believe it. Arguments were put forward that the journalist had been bribed and that the argument would be politically enforced. The truth could not be absorbed, and their brains made up various arguments as to why they would be right after all.

Making up arguments to prove you right

A common way to get right is to use a lot of arguments. Unfortunately, these arguments are not always relevant and can even lead to the other person becoming even more convinced of his own right.

For example: John is a man. All men are people. So, John is a human being.

Below is a list of erroneous argumentation styles that detract from getting you right:

Situations are not always comparable. For example:

"You'd better not look at the past. That's why history is unimportant. You're not going to keep a pair of worn boots either. You throw them away and buy some new ones."

Comparing boots with history is a false equation.

In the case of arguments based on ignorance, you draw conclusions based on a few facts without knowing all the facts. For example:

"Pete drives a sports car, so he likes speed."

"Gerard has never been seen with a girlfriend before, so he must like men."

You can't say that if the majority is convinced that something must be true. There was a time when the majority of people believed that the earth was flat. By now, we know better.

You can go a step further in your argumentation by arguing that the majority is not stupid. With this, you accuse the other that he would accuse a group of people when he only has a different opinion.

By stating that something has always been done this way and that it is part of the tradition of a certain culture, the proposition does not want to come more or less true. The fact that people have been laying tarot cards for thousands of years does not prove that they work or speak the truth.

By telling you how many times you have already explained that something is like this and now want to talk about its consequences, you imagine that the original point is no longer open for discussion. For example:

"As so often said and explained, we know that if we legalize soft drugs, the step to hard drugs is made quickly. The crime that will result from this is what I want to talk about now."

There is no evidence whatsoever that legalizing soft drugs leads to the step to hard drugs, but you suppose it does, and you state a new conclusion that hard drugs lead to crime.

How can you convince someone when you believe you're right?

First of all, you can never be completely sure that you are right. Your information may be based on different facts. But suppose you are convinced of your own right and the other person's wrong. In that case, establishing a connection is the only way to get someone on your side.

Connecting is about finding the similarities that do exist. Muslims and Christians seem to be very different, but they also have a similarity. Both believers get their information from a book written a long time ago, and both believe there is only one god.

By recognizing and naming the similarities, you create a bond instead of distance. Precisely this bond ensures that the other also wants and can listen to your arguments instead of just defending his own point of view.

In this way, a dialogue of hearing and argument is created where a subject can be viewed from different perspectives. In addition, you speak to the other person's feelings instead of just the ratio. Precisely this feeling is the key to change someone's mind.