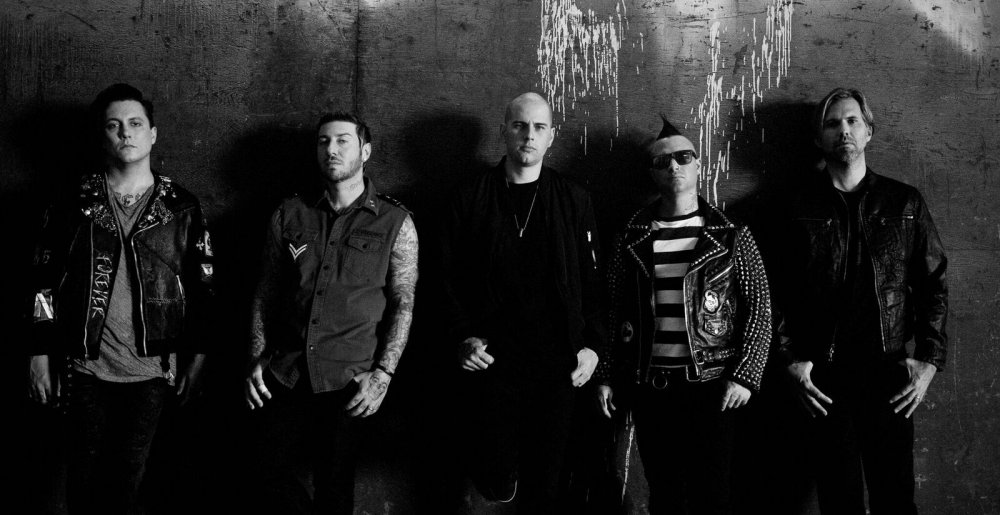 The Stage Is Set For Space-Aged Story Telling

Avenged Sevenfold’s new album, The Stage, kicks off with the title track as track one. Organ chords lead us downward and into waiting for the show, aka their seventh studio album, to begin. High speed impressive guitar and drums kick off and there is ever more building up and a sense of anticipation. Wailing guitar welcomes in the vocals and the lyrical story begins.

The Stage poses questions and ideas that remind me of the child pointing out that the fabled Emperor is naked: Who are we performing to? For whose benefit are we moulding ourselves? It indeed seems like with all that is hyped and grandly presented in modern life, that everything is a show and that life is a stage, the bigger and flashier the better. But for who and for what? (“Can’t you wake up?”, “You do know this is just a simulation, don’t you?”) The reference to the 'motherly' features of the wind may be a reminder of what is actually real in all of the circus of life. The beautiful flamenco sounding guitar which closes the track feels like another call to elements of simplicity once the flashy ‘show' is over.

The song is just as amazing live as it is on the album:
Paradigm as track two of The Stage is dark and curly vocals alongside rapid-fire drumming. The lyrics seem to be commenting about playing God in modern medicine (“Engineer the wires to your brain / Architect a code so you won’t feel the pain”). The question the song seems to be asking is where do we draw the line as to whether we are human beings alive or something else entirely?

The brass and melodic guitars of Sunny Disposition belies the darkness of its message. I call it ‘doomsday brass’. The song appears to be reflecting an arrogant dance of ego and control over humanity, which culminates in use of nuclear weaponry, and perhaps our demise. Just as The Stage lyric noted that ‘this is just a simulation’, Sunny Disposition refers to “Such a marvelous time I will find in an illusion”. Are they referring to life itself as an illusion? Or just the egoistic elements, as was described in The Stage? Let it be said that this song edges toward the 7 minute mark and I barely noticed it. None of the songs on this album feel ‘too long’ despite being far longer than is the norm.

Both the music and the lyrics of God Damn hit hard. It is referring to the consumer-driven world we live in, with our wants the king, yet us becoming victims to this in the process. “Where’s the fun in freedom when it renders you a slave?”. There is an impressive Pied Piper-esque bridge where floaty guitar sings while M. Shadows describes children being lured away. The beautiful heaviness that kicks in after this brings us back to earth. I could see this being a well-loved track of The Stage.

Track five seems to mirror Paradigm’s commentary on ‘playing God’ but more in an evolutionary sense, with a hand from technology. Is our obsession with technology going to eventually kill us all? I’m afraid that I’m running out of adjectives to use when it comes to Avenged Sevenfold guitars. Impressively sick would be not even close to appropriate for Creating God. It has a sound where if you appreciate rock that you might need to stop what you’re doing and just sit there and take it all in. Also musically, the vocals seem to be channelling Layne Staley and the drumming has kicks of simplicity to a point that it’s genius. This is my favourite track of the album so far.

But let’s carry on, since we have to. I’d rather re-listen to Creating God times infinity, but this is a review. Ahem.

Angels is lighter and softer than the other tracks on the album to this point. It also features an impressive guitar interlude as well as engaging timing and drumming. Lyrically this seems to be a confession of being drawn to darkness despite trying not to be. It may also be commenting on questions of faith versus reality.

Simulation continues the same vein of softness and quirky timing to begin with. There has been mention in other songs about the illusion and simulation and going into this track I was excited for Avenged Sevenfold to expand upon that concept. There’s references to The Wizard Of Oz (in particular the fantastically acclaimed Wizard being nothing but an ordinary man behind a curtain in Emerald City) and The Matrix, where the character Neo is choosing between depth of reality or staying asleep to it. From the movie: “Take the blue pill, the story ends. You wake up in your bed and believe whatever you want to believe.” And this is just the first verse. It’s a song to inspire questions as to what is actual reality or what we’re just being presented with and accepting without question. The closing of the song is cleverly done as it feels like they’ve been (musically) sedated as well as describing this in the lyrics.

When The Stage was released as an album, it was done so immediately and without a drawn out release schedule. I believe this is due to the fact that a lot of what Avenged Sevenfold are sharing with this album is contained within the lyrics, and they wanted people to take this in and ask questions, as Shadows put it “maybe inspire them to educate themselves.”

Organ and vocal effects float us into the eighth track, Higher. The harmonies and vocal focus is a beautiful start before the drums kick in and guitars amp up. Instrumentally there is a sense of building and climbing and striving which suits the lyrical references to space exploration, but could easily have double meaning and be referring to death, being “freed of the world / Shed of the weight / Onward to see you my friend”.

Roman Sky is unlike anything I’ve heard on a rock album before, by way of the subject matter as well as the music. Courtesy of the internet, I now know that the song is about Giordano Bruno, and how that he was burned as a heretic in the year 1600, for theories of the universe beyond what was accepted. The song is a beautiful remembrance of someone before their time, with emotional vocals and exceptional guitar solo enhanced by an orchestra. Yes. An orchestra.

Closing The Stage is the final track, Exist. At 15:39 length, I was prepared for an epic song. A7X are telling stories with their songs and 3 minutes is a small window in which to tell a story to completion. The track begins with spacey effects moving through our ears, orbiting through space. An organ joins in and there’s a silence before heavy metal chaos kicks in. Only it’s not so much chaos as highly skilled instrumentation. There is a story being told musically that has to be heard to be appreciated. At some points we are colliding, at others we are suspended, expanded, moved, surrendered, held. Don’t just listen, let yourself be taken away by this track.

When the vocals of Exist begin, it feels like a sweet moment due to the fact that no one knows anything from the beginning of life. We’re on this journey alone which is both freeing and daunting. “Sailing away, beyond the reach of anyone / Far beyond the dreams of everyone / No light to follow / A shot in the dark / Does anybody know?”. The Neil deGrasse Tyson quote included in Exist seems to encapsulate the message of the entire album: That ego and human choices are a limiting perspective of what life is, and a dangerous view to hold as gospel. Knowing that life is so much more, and to widen our perspective, is what is likely to save humanity and the planet for that matter.

This is far more than a rock album, yet could be simply enjoyed as that. Weaving depth and intelligence with exceptional rock, The Stage is an album asking for fans of Avenged Sevenfold to think bigger, ask questions, recognise what we’re all a part of, and how so much of what we are plagued by is our own creation. A change of view being demanded by The Stage is handing us the keys to freedom. And unlike Giordano Bruno, we are thankfully free to have our own ideas and inspirations.

Asya Kardzhaliyska
€ 0,05
pm
trainee optical consultant
I'm the ONE I’m the one to call about general writing queries, anything from music journalism to screenwriting and even some confessional poetry!
Become The one