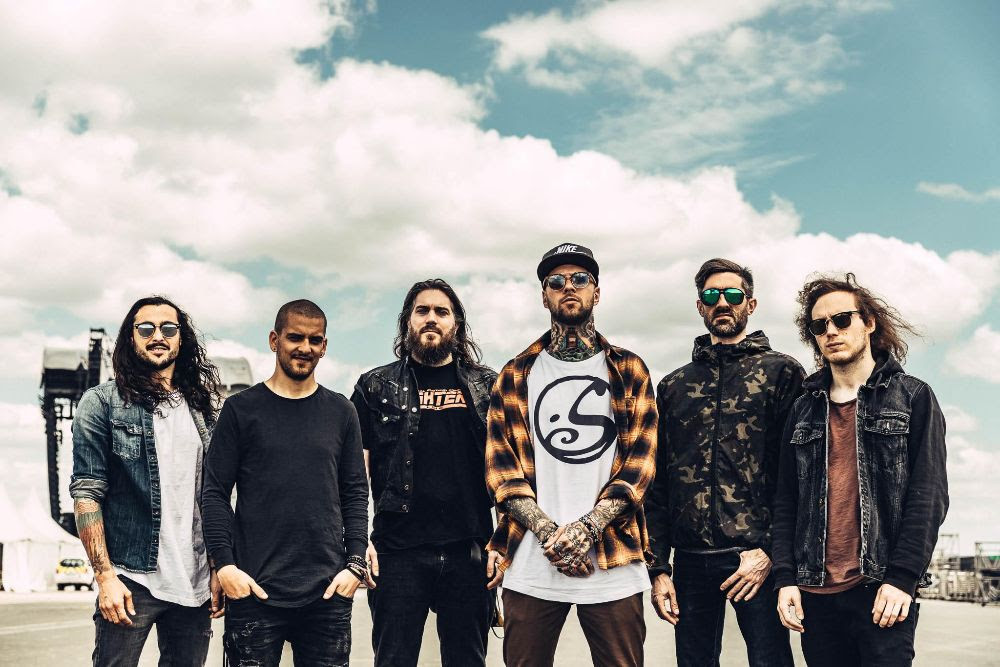 The influx of new music from metalcore bands and surrounding genres within the past year has dramatically boosted both the genre’s popularity, and its reception among the modern world. Hand in hand, the ideals and influences of this genre have grown, making it an ever-present part of the music world. Adding to the exceptional releases of 2019 is French metalcore band, Betraying The Martyrs, and their new album, ‘Rapture’. Through a brilliant eleven track album, the French musicians have created an album that has not adapted to society, instead calls society to adapt to it; breaking the mould and becoming a standout album amongst a plethora of other releases. It is for this reason that Betraying The Martyrs have not only produced an amazing album for themselves, but have created an album that promotes the ideals and characteristics of the genre to the world surrounding.

Initialising the album is ‘Ignite’. The minute long instrumental track is a vivid establishment of the tones and themes to be found in the following tracks. Solemn and eerie instrumentals catalyse the creepy and uncertain feelings that pierce through each second. Throughout this, a somewhat spiritual choir sound can be heard; something that introduces the album as something bigger than we can imagine, and more influential than anything we have previously heard. ‘Ignite’ certainly sets the mood, and promotes anticipation within the listener in regards to the album ahead.

Track two, and the first full track, is ‘Eternal Machine’. Adopting the tones created in ‘Ignite’, ‘Eternal Machine’ opens with a heavy guitar riff with an underlying sense of something spiritual. These two elements certainly juxtapose one another, and work together to create uncertainty and division in their power, but unify to create an exciting song. Alongside the powerful tones and instrumentals, the lyrics are also something to behold. I often find that the deepest and most earth-shattering lyrics lie within the cruel vocals of metal singers, and this track is no exception; “always wanting more and more// living the nightmare just to feed the dream”. These lyrics, alongside the rest of the song, provide an observation upon our growing materialistic world, and the damage it has created upon living. As stated above, Betraying The Martyrs explore the idea that the dream in which everyone once had has disappeared, and has instead been replaced by a never ending cycle of slaving away for the benefit of a world gone mad. From the dawn of the album, Betraying The Martyrs have showcased their passionate voice, their ability to speak out, and their ability to slash through the lies created to shelter society.

Following is track three, ‘Down’. This track is notably one of the most popular releases upon ‘Rapture’, and it is evident to see why. Opening with yet another strong riff, Betraying The Martyrs show that they can create new and refreshing introductions, whilst also including hidden touches of their true sound- signifying that the song is truly theirs. Perhaps the most standout feature of the track is the chorus. The back and forth between heavier and lighter vocals not only create an excellent contrast, but create some sort of chant or mantra. With their upcoming tour ahead, I can only imagine how the crowd will react to this song, and how the connection between the audience and the artist will be heard through the powerful chant created. It really seems as though it was made for the people; a track that makes listeners aware of the world around them, and invites them to turn on everything they have previously believed in through the chorus. ‘Down’ is a visibly inclusive song; one that will only be heightened by its live performance!

Track four is ‘The Iron Gates’, a track with a title that certainly caught my eye. In reflection of ‘Ignite’, The Martyrs abandon an opening riff, instead having an eerie and unsettling hum. Picking up from this, heavier instrumentals and the iconic vocals are brought back, and so too are the themes of anger, questioning and unveiling the truth. The gutsy choruses alongside the heated verses creates a versatile track. Like most Betraying The Martyrs tracks, such inclusions create songs with more than one dimension, and allow for multiple emotions and stories to unfold at once. Albums and songs such as these account for the growing popularity of this genre, showcasing that it is more than just music, but a way of communicating stories, ideas and beliefs. ‘The Iron Gates’ is a versatile and powerful track upon the album of ‘Rapture’.

Following is track five, ‘Parasite’. This track certainly gained a positive reception, and even became the title of the European tour to commence shortly- ‘The Parasite Tour’. This track showcases a longer instrumental section at the forefront, putting the talent of the band on full display. Branching from this strategic addition, the vocals also differ from previous tracks, beginning in a sort of deep growl rather than screaming from the initial seconds. By doing this, The Martyrs have not only displayed the versatility that lies within their talent, but have created a song that has room to build up, creating an imperative tone. Alongside this, the lyrical content is a reflection of the initial track, ‘Ignite’, channeling their malevolent and often dark roots. ‘Parasite’ represents diversity within the album, yet slips in perfectly to the eleven track album. It has proved to be a favourite track of many, and has so too become mine!

Track six is ‘The Sound of Letting You Go’. This track certainly begins as an outlier, but manages to mould itself to the themes of the album. The introduction of string instruments alongside the classic Martyrs sound is something truly unique, and through their intertwinement, proves that ‘The Sound of Letting You Go’ will not be just another throw away, slow ballad, but an emotional track that encompasses the true values of the band. The contrasting tones continue throughout the song, creating a track that moulds together in all the right areas, proving that the formula to a good metal track is not set in stone, but is largely decided upon by the way in which the track is composed. ‘The Sound of Letting You Go’ is another great inclusion from ‘Rapture’.

Up next is track seven, ‘The Swarm’. This track opens with what has now become my favourite introduction from the album- an awesome fight for the spotlight between drums and guitar. Getting off to an excellent start, the track to follow lives up to expectations. The track, particularly the verses, becomes a constant battle between drums and vocals. It becomes a track that demands your attention, and does it in every way possible. It becomes impossible to ignore the lyrics and the instrumentals forced upon you, and crawls into the mind of the listeners. ‘The Swarm’ is by far one of the most powerful tracks upon the album, depicting the skill that Betraying The Martyrs hold in regards to enticing their audience, grabbing their attention, and keeping hold of it until the final seconds of their songs. ‘The Swarm’ demands to be not only be heard, but listened to, and through this nature, has become one of my favourite tracks from ‘Rapture’.

Track eight is ‘Monster’. Displaying yet another differentiation within the beginning, this track gradually builds up, growing into the powerful track it is soon to become. The tempo changes allow for some interesting and skillful transitions- showcasing the talent of the musicians within the band, particularly guitarists. Such an ever-changing and fast-paced track ultimately packs a punch at every twist and turn. It is generally accepted for an album to lose its energy toward the later ends of its listing, however, with tracks such as ‘Monster’ thrown into the mix, ‘Rapture’ remains exciting and inspirational throughout its entirety. Moreover, the manipulation of vocals is a prominent feature within this song, and is an admirable effort from Betraying The Martyrs’ lead vocalist. Both the instrumentals and vocals combining to show off every element they can produce not only demonstrate the true talent of The Martyrs, but create an unheard and unpredictable track.

Following is track nine, ‘Imagine’. With one of the only titles portraying some sort of a hopeful underlying message, it was expected that this track may sound a little different to others. From the get go, a lighter type of introduction is paved, creating the foundations for the tones of hope and assurance to follow. Like most Betraying The Martyrs tracks, the lyrics truly speak for themselves; “Reflections, tell me who you really see// it’s not perfection// but who are they to tell you what that really means”. The stated lyrics truly encapsulate the essence of the whole track. It provides a story of courage and encouragement amongst a fight for self-worth and self confidence; a battle many individuals face on a daily basis. All elements of the track work together to create this feeling of hope and worth, and truly provide an insight into the morals of the band within the self-deprecating world that surrounds us. ‘Imagine’ not only provides the audience with a step back to reflect, but allows us as listeners to gather a further insight into the minds of Betraying The Martyrs!

Track ten is ‘Incarcerated’. Picking up in stark contrast to the previous track ‘Imagine’, this song is heavy and full on from the initial seconds. Throughout its many layers, this track includes one of my favourite elements off the whole album. Within the pre-chorus, an almost muffled version of the original screams can be heard. I feel this does a lot for the track- not only in breaking it up, but creating another dimension to the song’s composition. Much like many of the previous tracks, a new twist is often found around the corner of each stage of the song. ‘Incarcerated’ and many of the other tracks prove that Betraying The Martyrs are not short of musical ideas, but do not just throw them in for the sake of using them. Their skillful intertwinement keeps listeners on the edge of their seats, and creates unpredictable changes in the album of ‘Rapture’.

Concluding the powerful and dynamic album is the title track, ‘Rapture’. People often say that you will leave the best until last, and I truly believe that Betraying The Martyrs had every intention of fulfilling this saying when completing their album. The song includes everything that I was fond of as a listener from the rest of the album; tempo changes, strong instrumentals, voice manipulation, emotive vocals, connections to the establishing track of ‘Ignite’, and most importantly, excellent lyrics. The track acts as an undeniable call to action- a visible question to society that will leave listeners pondering for hours upon the song’s conclusion. ‘Rapture’ and its placement within the album was a brilliant move, and not only acts as an embodiment of the album that was, but ensures that the sound, ideals, and morals of Betraying The Martyrs linger within the listener for some time to come.

Through eleven tracks, Betraying The Martyrs have proved not only to the metal scene, but the music industry as a whole, that the most important element in music is how you spread your message. On multiple occasions, the band questions the society surrounding, daring to shed a spotlight on topics others would dare not to touch. Often stereotyped by their sound, The Martyrs are more than just a rebellious metalcore act, but are a talented group of musicians using their voice for good. ‘Rapture’ can truly be described as an eye-opening album; one that demands your attention, thought, and mind.