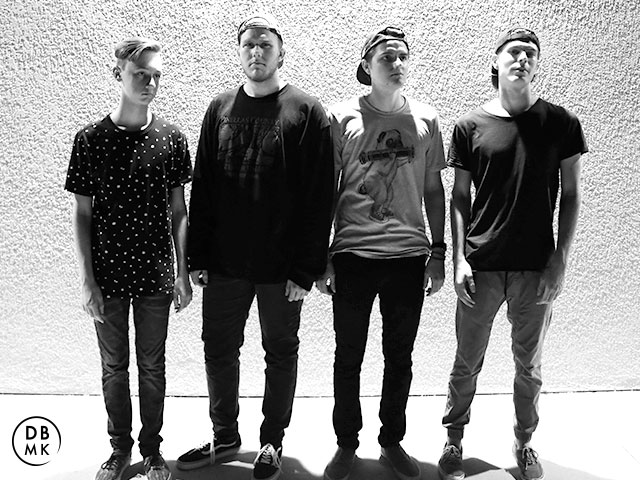 When we put a call out for new music, members of our Strife Family shared on Twitter that they were enjoying DBMK. Not being familiar with them, we got curious and decided to check out what the fuss was.

Well! We learned that Denim Blue & Miclain Keith are something very unique musically. Listening to their latest album Collapse subsequently set off a series of eargasms for this listener. So while Collapse was released back in July this year, we hope you don't mind if we review it, because it's amazing and we're excited about the DBMK sound.

Collapse starts off with Analog Boy, and if you don't know anything about DBMK, it's very interesting to hear this song starting off by flowing into a soundscape of digital effects. A grounding bass appears. Clean guitar joins in and then we hear a call of "Please don't go".  We are then into a chiptune-esque melody, before the first verse begins. This first minute or so of music is already captivating. Expect the unexpected? Okay, got it.

Pre-chorus, it's marching style drums, synth and pure vocals. I'm not sure about others, but here I was 100% captivated by this openness of sound. The vocals trail off and we hear a soundbite of "What if it just.." before rocking anthemic drums and guitar ring out and join empassioned vocals.  At that point I was GONE. Hooked. Instantly. "I HEAR YOU, YOU ANALOG BOY!".

But it's a fluke, right? Just one lone masterpiece of a creatively assembled track, merging curious elements which go against the unspoken formula of song construction, yet work so brilliantly together. Musical artistry. Let's continue.

Track two is called Pills and begins with piano and a gentle beat, before a fast paced spoken word/rap. The best way I can describe the vocal quality is honest & open. The whole band joins in, leading into the chorus, where a bass drops in. Out of nowhere. This combination of sound with that buzzing and morphing bass and the vocal openness is so beautiful. The final chorus is just so still and soft, it really expresses a sentiment of emotional pain which is described in the lyrics.

The same feeling continues as track three, Nocturne, begins. It's sombre, with piano, those amazing pure vocals, and with effects sneaking in at the corners.  That sneaking builds up and up, eventually turning into an impressive drop along with the chorus which is heavy in electronica. The electronics back right off to be subtle in the last 30 seconds and we are left with piano again. I love the simplicity of this music. A standout lyric of this song for me was  "If love were a shape it would be the one that the corners of her mouth make". All of it seems to be a beautiful narrative on a relationship ending.

Bullets begins with vocal harmonising and barely there piano. Before the first verse begins, there is a build up and then an electronic focus. We're grounded by very real vocals & lyrics. This song includes rap/spoken word and it's really engaging; I hung on every word. Before the bridge is a bass interlude that is very cool.  I noticed that DBMK had made their own comments on Genius lyrics and that this was noted as "An infection. I’m not sure when it will be mended."  To me it speaks about heartbreak.

Patient (N.) gave me goosebumps in the first few notes for some reason. It is a heartstring-tugging, hymn-sounding song, with the most beautiful lyrics. I won't give too much away on this one. It has that feel to it; that you just need to be with it. With this song I now feel a Jeff Buckley-esque tone to the vocals. Just beautiful. I may or may not have shed a tear (okay, I did).

With Ampersand we are back in really heavy electronic sound and I wonder how far the 'alternative' genre stretches to include such a sound. Even the vocal tones are really EDM-edged. It's a pretty sound though, and the bass is very cool along with a light melody.  The transitions into and out of the choruses were interesting. I was left craving for some more heaviness and it surprised me that I actually got my wish with the bridge, when drums and vocals took centre stage. The last chorus echoing ear-to-ear and the return to drums again was an awesome way to end the track.

Black/White starts off with an organ sound and clear vocals. A drum beat surfaces and lifts the feel of the song, but it's still staring you in the face and saying "listen up". This song relates to oppression, control, doing what you're told, living fearfully. It points towards religion and schooling and keeping oneself cooperative and 'good'. "And I didn't even know that I witnessed a crime / And I didn't even know that I gave my life". This is such an important song and one that really moved me. The last minute and a half of this song is mind-blowing. Just listen and take it in.

Guitar welcomes us to Always On and by this point at track 8 I am really happily-comfortable with the fact that random bass drops and electronic effects are going to appear along with those honest vocals. This is a really easy and flowing song and feels like a road trip, but it's written about relationship angst. This lyric was beautiful: "I'm burning but I want a warm body next to mine / I'm sinking to the bottom weighed down by my flawed design".

Boxing Gloves starts out with some really cool electronic sounds and beats, taking us back to an 80s sound, but it doesn't feel retro at all. I love the chorus of this song particularly, it feels like a freeing moment in amongst an angst. Like many other tracks on this album, the lyrics hit hard emotionally, with 'just a man' writing about not being able to get in past the barrier that the woman he loves has up between herself and him. "You can find me in the corners / Of your disenchanted eyes/ And if you decide to let me in I'll be here. The truth about us living / So hard to stay alive / But if you decide to let me in that crooked mind."

Oh no, this is the last track guys: Twin Machines. It's basic drum taps, and a rap, before melancholy guitar. The bass drops and we're into another verse. This is amazing. In so many ways. The lyrics, the sighs in amongst the vocals, the honesty, the spaciousness given to the spoken word to flow emotionally to where it needs to go. The outro, was an impressive way to end the song as well as the album: "Connect connect connect / Remember this is what you needed, isn't it".

Now that I've 'met' DBMK's music, let me just say that they have surpassed any expectation I might have had. I fell in love with Collapse. The experimental and skillfully designed tracks have used a combination of electronics, guitars, drums and that honest/pure/open voice to express the DBMK songs artfully. I had no sense of them being contained to a set structure of song, and this was refreshing, as it has seemed to mean that DBMK are creating authentically. This means that as listeners we are lucky enough to get 'hit' with the songs straight on, and get to embrace the heartfelt messages within them.

The songs on Collapse are all masterpieces, musically, and my ears will continue to process this experience and what. just. happened.

DBMK are playing with Vesperteen on 8th December. This is a perfect match, given that both DBMK and Vesperteen use a unique expression of sounds with electronic effects and still sit within the alternative genre. I would be there, up front, and fangirling if I weren't on the other side of the planet. Tickets are available here.

We are grateful to our Strife family for sharing with us about DBMK! You can have a listen to Collapse below.