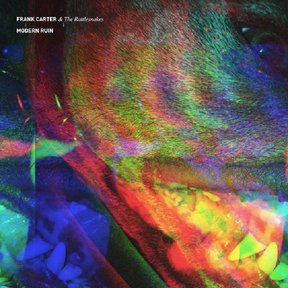 Frank Carter & The Rattlesnakes—a name that’s cropped up on social media once in a while, but a name I’ve never really looked into. Formed of former Gallows and Pure Love frontman Frank Carter, they’re officially classified as a post-hardcore band, though I’m more inclined to say that they lean more towards rock. Listening to Modern Ruin (their second album), I really didn’t know what to expect; having never listened to them before, but I was pleasantly surprised.

The album’s opening track, ‘Bluebelle’ is a somewhat abruptly short song, coming in at just over a minute in length with poignant acoustic guitar and haunting lyrics—with a vocal style that is a little reminiscent of Young Guns or You Me At Six. It’s a calm song, and in a lot of ways, it draws you into a false of security about what to expect on the rest of the album. The following track, ‘Lullaby’ is instantly heavier with thumping guitar (slightly ironic considering the name of the song). The persistent drums here make the song feel almost like a war anthem. From the poetic imagery (“we count the hours/whilst we wait for the sun), it becomes instantly clear just what kind of direction the rest of the album will be heading in.
​
‘Snake Eyes’ goes on to reassure you that nothing about this album will be peaceful. The theme throughout the song—though loosely linked with ‘Lullaby’ is also wildly different. It explores uncertain events and whether or not he ought to be ashamed of something that he did the night before and the insistent bass here help give the song a sense of urgency and ramps up the tension—in a way it makes you feel as though you’ve been caught in an incriminating act and you have to act fast to save the situation (“and I guess the only thing to do/is break all of my promises to you”). The remorse felt throughout the song really strikes through in the latter half, along with the wrenching imagery of wanting help but being too stubborn to ask—though like the songs before it, you get the sense that he isn’t singing to you. These songs and their confessional nature are meant for someone else—a different recipient, and that we, as the listeners are bystanders in these events and in that sense this album feels like La Dispute, in the sense that at some points you feel like you’re eavesdropping.

If ‘Snake Eyes’ was dripping with meaning, so is ‘Vampires’, apart from the strange addition near the end of the song that I can only describe as a wild west feel—is a little jarring and unexpected, and perhaps ruins the flow of the rest of the song. ‘Wild Flowers’ however, with its more prominent drums make the song feel cleaner and brings along a certain kind of wistfulness that wasn’t there in the songs preceding it. It shows a much softer side of the album with lines such as: “Tiny wild flowers all tied in your hair/like stars in the sky just floating there”. There’s an amazing amount of contrast between the innocence of picking flowers with a girl and the harsh reality that he goes on to mention that “as you walked you combed out your hair/and all the flowers fell like birds through the air”, it’s a beautifully heart-breaking juxtaposition.

The record goes from strength to strength with ‘God Is My Friend’. The instrumentals take more of a backseat here, giving over to more powerful vocals. Each song on this album flows into the next one, like a continuing story—and in a way, it makes me think of a stream of conciseness. One of the most notable things about this album is the lyrics, that are so brutally honest that they’re almost jarring (“send me to hell, it’s where I belong”). Despite the fast-paced instruments that follow every song, this song has a much darker undertone that only hit me near the end.
Towards the latter half of the album, the songs get a lot more confident, with the tracks feeling a lot stronger and a brilliant example of that is ‘Thunder’. It’s slower than anything else on the album, haunting and sad—the very guitar seems to drip with melancholia. The song has a bitter commentarial jab at society (“they’re dangerous because they don’t think they’re wrong”) and this song feels all the more necessary considering the political situation in America. This was the song that sold me on the album—though the songs before this point were wonderfully composed, they somehow didn’t click with me in the way that this track did. It’s easy to get swept along in the music of this album, before the lyrics drag you back to the meaning of the song—that each song means something.
The only thing that could perhaps be considered a negative on this album is the addition of ‘Modern Ruin’, the screaming vocals here don’t really fit in with the rest of the songs, and I personally feel that it stunts the rise of the album.

So, as a first-time listener to this band, what was my opinion? The album has a sense of hopelessness that could easily be missed, with the idea that we’re trapped in a sphere where everything is doomed to repeat itself. Every song on this record has a self-reflective quality about it, as if he’s talking to himself, without realising that someone is listening. The album doesn’t really get into its stride until the latter half—and though the beginning of the album is good, it sometimes feels a little lost. I mentioned this earlier when I discussed ‘Snake Eyes’, that throughout a lot of the album we feel like bystanders in the events that are being described to us, in this sense the album has a wonderful narrative flow to it and lyrics that are so beautiful it takes your breath away. And the most interesting about this narrative is that Carter switches positions between observer and narrator when he’s discussing his own thoughts and experiences—so all in all, it’s an album that proves that there is always more than what initially meets the eye.
​
Written by Asya Kardzhaliyska