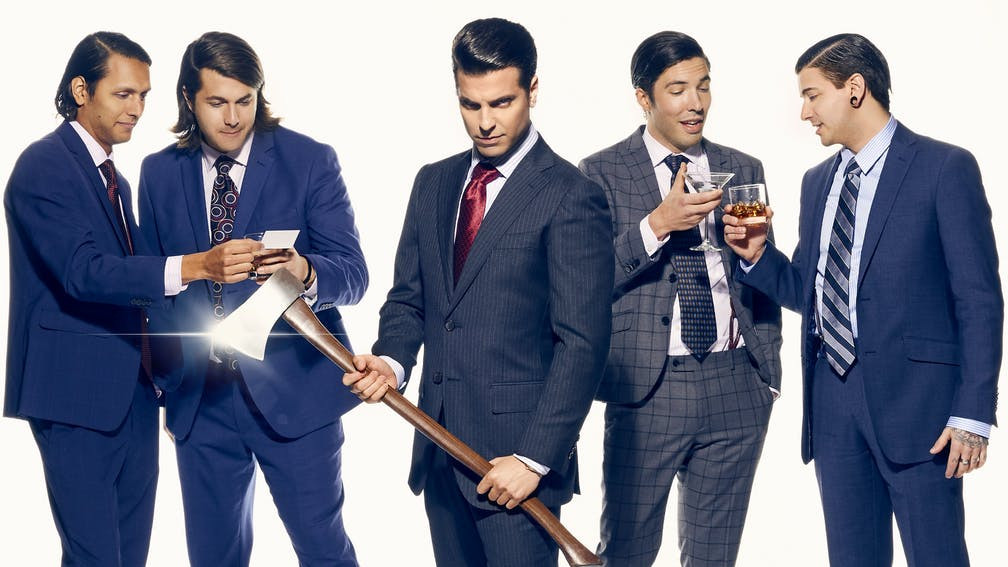 If we’ve learned anything from our favourite horror icons, a sequel is not always guaranteed. But these days, you’ve got to have a sequel, especially for a project as adored as the daring horror narrative that was ‘The Silver Scream’. With their tantalizing twists, intense instrumentation, and malevolent motivation, Ice Nine Kills have never failed to crawl into our ears and present us with mystifying, and equally horrific, tunes. Their latest album, ‘Welcome To Horrorwood’, proves the second hit can be just as deadly as the first, guiding us through a new journey of inspired stories and insane breakdowns, all signature to the beloved Ice Nine Kills sound. If you like even more scary movies, this is the album for you!

More theatrical than ever, ‘Welcome To Horrorwood’ takes time to set the scene, placing you in a world of daunting mystery and amplifying the grotesqueness soon to reach your ears. ‘Opening Night’ is not merely a vessel into the album, but is perhaps the pinnacle of the world-building that led up to this incredibly well thought out project, (I mean, have you seen their evidence website)! Leading straight into the real introductory track, ‘Welcome To Horrorwood’ is a menacing tune that lures you in with its somewhat approachable nature. This delicate vocal performance surely enough spirals into a chaotic whirlwind of brutal screams and heavy instrumentals. With their own meta-fictive take, Ice Nine Kills awaken the world they are set to embark in, creating a clever commentary on the essence of ‘The Silver Scream’.

It was now, only three songs deep into the new album, that I was met with one of the tracks I anticipated the most. Horror is no stranger to the gruesome and the flesh-eating, but ‘Cabin Fever’ undoubtedly stands as one of the most outrageous, unpredictable, and strangely enjoyable features of the disease-based horror genre. With urgency and pace, ‘A Rash Decision’ tackles the movie with excellence, picking it up from its highly contentious reaction, and posing it in the spotlight for the song’s 3 minute and 31-second duration. In every which way, the track emulates the film; diving straight into Spencer’s brutal screams much like the movie’s fast-paced contamination, and the intrusive “bangs” that come just as unexpected as some of the many choices made in the film. Lying on the foundation of quick and strong guitars and drums, the track holds its own and demands your attention. Much like all their tracks, it’s the small details- like the inclusion of the truck sounds- that not merely pay homage to the song’s respective inspirations, but highlight Ice Nine Kills immense dedication to the cause.


Within ‘Welcome To Horrorwood’s induction into our ears, it is fair to say the promotional process was nothing like we have seen before. Not to mention, anything we have heard before. The single releases of this album prove to be some of the strongest of the band so far, and continue to mark their presence around the many incredible tracks on the fully released album. ‘Hip To Be Scared’ was our first taste of the new era, incorporating the iconic riff of ‘Hip To Be Square’ into a self-reflection anthem inspired by ‘American Psycho’. Littered with memorable references, self-insertions, but most notably, an infectious chorus, the track marked a step forward for the band, taking their artistry to a new level and introducing us to their latest approach to horror. This remained the case for their next single, ‘Assault and Batteries’, taking on horror icon Chucky. For INK, it was Child’s Play. With some of the punchiest lyrics, this fast-paced track was not only a true homage to the infamous doll, but was a clever feat of writing and production. If there is one thing the band should be applauded for, it is their ability to capture the energy of a film and perfectly express it within the track- a perfect transmission between the two. Topped off with a gnarly breakdown, this track left a mark not to be forgotten. ‘Rainy Day’, a take on ‘Resident Evil’ was the next step towards completion. Submerged in a jolted, technological essence, ‘Rainy Day’ was an instant earworm that strayed from the usual, relying on the game’s voice-over to string the narrative together. With that input, the song was able to focus on another direction, that being Spencer’s clean vocals. Composed of the largest amount of clean vocals of the album, ‘Rainy Day’ used its space as a single to bravely articulate that it is not the screams that push Ice Nine Kills’ emotion to the forefront, but their multifaceted abilities and well-thought-out production choices that truly make all the difference. The last single, based on ‘Pet Sematary’, was none other than ‘Funeral Derangements’. This track remains one of the strongest on the album, and a personal favourite. Dark, morbid, twisted, and haunting, this track is a complete knockout- throwing everything at you at once, yet still being the perfect amount to take in. With a reliance on the score, and some jaw-dropping homages, ‘Funeral Derangements’ holds a shock factor that remains on each listen, and a composition that never fails to leave you impressed.

What would a sequel be without some cameos? Much like their well-appraised ‘Silver Scream’ album, ‘Welcome To Horrorwood’ adopts the help of some of the scenes best, adding a new depth to these twisted stories. Jacoby Shaddix, Brandon Seller, Ryan Kirby, and Buddy Nielsen all appear on the album, lending their talent to some of the most show-stopping tracks on the album. However, these collaborations all culminate to one of the most jaw-dropping tracks of the album, ‘Take Your Pick’. Featuring Corpsegrinder, this track takes on the brutal film, ‘My Bloody Valentine’- and you guessed it, ‘Take Your Pick’ is just as brutal. Savage screams slot right in next to even heavier, dirtier pleas, all amplified by wailing female cries. Guttural breakdowns, emotive theatrics, and a world-building soundscape make ‘Take Your Pick’ one of the most shocking, yet truthful tracks on the album. One more listen will never be enough.

Another key highlight from the album is ‘Ex Mortis’. Nothing like INK has ever done before, this ‘Evil Dead’ anthem is dictated by its swing- its fun yet haunting energy. The background brass truly is the icing on the cake that is the automatically catchy chorus. A refreshing hit of funk, ‘Ex Mortis’ is still inherently Ice Nine, whilst also giving us a fresh taste that extends beyond their normal boundaries. From a toe tap to a full-body swing, this track is quite simply... groovy!

With a dreaded buzzing, the album concludes with ‘Farewell II Flesh’. Atmospheric, this song goes beyond its walls and dominates with a sense of something bigger. This emotive ballad pours the band’s soul into their conclusion, with crisp vocals and a fluctuating instrumental performance that plunges into disarray just when necessary. With a sharp riff and lingering buzzes, ‘Farewell II Flesh’ perfectly encapsulates the album that was; an intense catalogue of tracks that are sure to be stuck with you forever.

Through 14 tracks, Ice Nine Kills have successfully showcased the beauty that can lie within sequels. Truly, ‘Welcome To Horrorwood’ is no second act, but is a stand-alone piece that encapsulates the horror, the emotion, and the legacy of some of our most beloved films. With skill, refined execution, and creative decisions unlike any other, Ice Nine Kills are inarguably at the top of their game. Sometimes dead is better, but the resurrection of ‘The Silver Scream’ is one of the highlights of the music year so far!

With more tracks to uncover, check out the album now (and let us know your thoughts)!