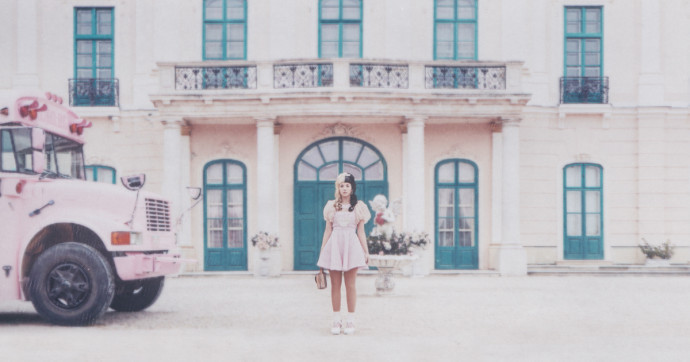 I saw Melanie Martinez live at the Lollapalooza festival back in 2017 in Buenos Aires, Argentina. The pastel colours, the toys and child’ items such as cribs or pacifiers have always been a huge part in the singer’s aesthetic and it shows not only the detail she puts on her stage but also, they are a graphic description of the image she strives for in her lyrics, her rhythm and even her outfits. Melanie Martinez has always been one of those singers who creates a world in a most detailed manner and with “K-12”, she manages to carry on her tradition.

Starting as a contestant in the television program “The Voice”, and achieving worldwide popularity with her debut album “Cry Baby”, Melanie Martinez is a 24-year-old singer, songwriter and photographer from New York who has now made it back to the spotlight with her second album “K-12”, an album that seems to continue with the theme and storyline initiated with “CryBaby”.

Something that always calls my attention about her music is how lighthearted and even childish it seems to be, especially considering the darkness of the subjects she touches. Again, it is noticeable how much thought Martinez puts into her work. The track titles, the innocent tunes proper of child lullabies and even Martinez’s own light, sweet voice helps to deceive the listener and hides the depth “Cry Baby” and “K-12” actually has.

If “CryBaby” was the introduction to this world in which Martinez uses metaphors to describe issues such as alcohol intake, drugs consumption, and sexual assaults - some of this directly referencing her own childhood, “K-12” is an expansion of this same universe with the character Cry Baby still as it’s protagonist. While the background in this second album changes into a school environment (K-12 Sleepaway School), Martinez keeps up with her tradition of using childish metaphors and music to describe darker and more mature topics.

Along with the album, Martinez’s released a 90-minute’ movie that gives an extended content into this album and the world Cry Baby lives in. For those unfamiliar with this world’s protagonist, Cry Baby is Martinez’s alter-ego, a trastornated, insecure girl with a family full of flaws but that tries to conceal them to all strangers, and hence leaving Cry Baby with a sense of fakeness on her own life. While perhaps too long, it gives a more graphic view into how twisted is Cry Baby’s life, the society she lives in, and her own mind.

The album starts with “Wheels on the Bus”, which describes the road trip to K-12 Sleepaway School. Another aspect that Martinez’s carried over from “Cry Baby” is her criticism on the adult population that turns a blind eye to the unhealthy behavior portrayed by their youngsters (in this case shown through the driver’s characterization) What’s really interesting in this track is how she describes herself as annoyed and even resigned by this indifference, as expressed by lyrics such as “I'm quietly observing‚ I'm saying nothing”.

With the second song, “Class Fight”, the situation described is Cry Baby’s struggle with having a crush on a boy who is with a classmate of hers. Not only do Cry Baby’s parents make their first appearance in “K-12” but also, we get another glimpse of how toxic their relationship is, with her father especially violent, and Cry Baby susceptible by their influence.

“Shooting at the angels while claiming you're the good guy” and “By the separation in this place that you've created” certainly are two of my favorite lyrics of this album, and they are from the third track, “The Principal”. Here, a political stance is given since her criticism towards the negligent adult figure seems to now focus on United States President’ lack of action towards the recent spree of school’ shootings, hence the principal’s metaphor.

Martinez’s ability to say important things and speak her mind in a subtle way has never stunned me more than in this song. I have always applaud the musicians who take their time to speak up about important matters, so “The Principal” has quickly become one of my favorite songs out of “K-12”.

Bullying is a subject that Martinez’s discussed at length previously, but it takes the spotlight in the fifth track: “Nurse’s Office”. Here, the main subject is how widespread is bullying amongst school’ peers but what’s also implied, is the indifference the school staff has on the subject. Bullying is bad enough but to have no support system on top of that has to be excruciating. In “Nurse’s Office”, Cry Baby copes with it by faking illness so as to be able to leave the school’ premises.

Another of my favorite songs is this album’s seventh track “Strawberry Shortcake”, in which the topic discussed is the ridiculous stigmas installed in the society, such as how we must be perfect all the time and how the way we dress, talk or behave has a direct incidence in any harm inflicted by males onto us.

“Instead of making me feel bad for the body I got / Just teach him to keep it in his pants and tell him to stop” is one of the lyrics that perfectly convey the message of this song, while also managing to be completely empowering. Speaking out about this outrageous conducts we approve as a society is so important, and the singer manages to do so in an outstanding way with “Strawberry Shortcake”.

With the ninth track, “Orange Juice”, Martinez touches yet another important subject, which is bulimia. Here, she gives the metaphor of turning oranges into orange juice to describe the process of purging and with lyrics such as “I wish I could tell you that you're fine, so fine / But you will find that disconcerting”, she states ourselves as our worst critics and the last to believe any good trait another person may think we have. It is a great analysis on the insecurities we have about ourselves physically, but the highlight of the song is the inspiring message she gives that we are all perfect just the way we are (“Your body is perfectly imperfect”).

All in all, I think “K-12” is one of those albums you need to get deep in touch with the lyrics in order to understand just how good these songs are. I admit that it took me a while to find the charm in this album and my first endeavours into this album and it’s world left me feeling that musically, it was too repetitive of its predecessor. Now that I’ve analyzed it completely, while I perhaps could have gone with a change in the tune, I understand that since this is a continuation of the world created in “Cry Baby”, there needed to be a strong resemblance in sound, themes and aesthetics.

Also, I recommend you to watch the movie. For listeners who, like me, love a good world’ building, this movie certainly accomplishes that. It took Martinez four years to film this interesting film, and she’s released it for free in all platforms, proving how there are kind hearts left in the world.

Tell us what you thought of “K-12” and check it out below if you haven't listened to it yet!