Album Review: Neck Deep - The Peace And The Panic 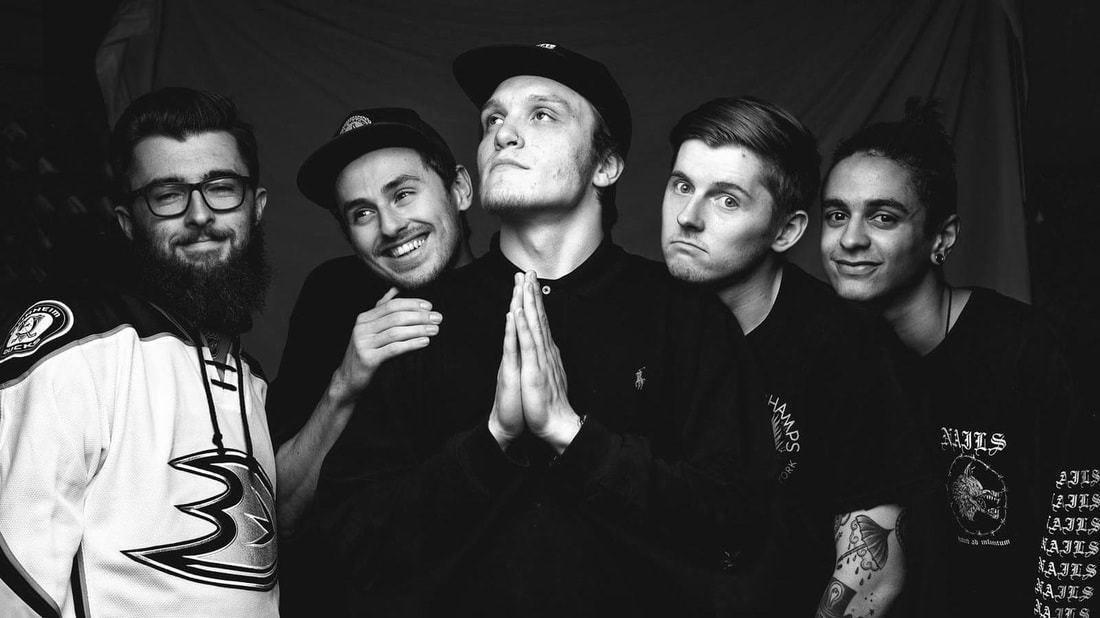 I can tell you exactly what I was doing when I first heard about Neck Deep. I was doing my A-levels and I’d only just discovered alternative music and I was buying records left, right and centre in my attempt to absorb what felt like an entire lifetime of missed music and bands. I can also tell you that though I didn’t listen to Neck Deep for quite some time, I remembered them because of the name. And, I can mention that Real Friends were also steadily climbing popularity at the same time. Finally, I’ll tell you that the first time I listened to Neck Deep, I wasn’t impressed. But, when I listened to LNOTGY—I was hooked and I’ve been a fan ever since. So, let’s see if the band continue climbing to new heights with their third record.

The album opens with ‘Motion Sickness’ (the second to last single to be released before the album came out). It’s everything that you’d expect from Neck Deep: peppy, upbeat punk and very reminiscent of something that you might find on LNOTGY. A song that didn’t immediately capture my imagination when I first heard it, but has since then grown on me. The plucky bass here makes the song an instant catch in terms of instrumentals and musical composition. One of the most noticeable things about this album is the insanely, almost annoyingly catchy choruses and hooks—you’ll be singing them for days on end after the first listen. The wonderful instrumental solo near the end of the song with the guitar and drums taking the lead really help to highlight how far the band has come in terms of growing and developing their sound.

Leading on from that is ‘Happy Judgement Day’. The instrumentals here are a bit more muted, with less aggression but it works well to the songs advantage. A politically driven song, and a jab at all the terrible things that we’ve been hearing about in the news recently. This song is a not-so-subtle whip at those who choose to only believe what they see and hear, or the ones who, in Barlow’s own words: ‘worship celebrities’. Each song on this album carries the themes of the record beautifully, but we’ll get into more detail about that a bit later on. One of the things worth noting is that Dani Washington’s drums on this record are an absolute joy to listen to. Something that you’ll notice when listening through this album is that Barlow tries something different with the lyricism, with addressing us directly and almost ‘breaking the fourth wall’, as it were, with rhetorical questions and using collective language which overall gives for a more united listening experience.

Skip forward a song and you’ll find ‘Parachute’. Musically, I found that this reeled me in more than the previous song (The Grand Delusion) did, but it follows hot on the heels of the exploration of Barlow’s character flaws. In terms of musical composition, it gives a nod to old school Blink-182. A song that’s all about experiencing all that life has to offer, again coming back to the theme of mortality: “I wanna do the things that you only read about”. It’s powerful, bittersweet and melancholic as he addresses ‘baby’ and how they can go ‘stare at the stars on your ceiling and pretend that we’re somewhere else”. Sorrowful in its use of the metaphor ‘the grass is always greener on the other side’. This is a song for a rainy day, a difficult day. But, also weirdly uplifting in the sense that the world has so much to offer, so why not go out and experience it?

Next up we have ‘In Bloom’, and it is without a doubt one of my favourite tracks on the record. Whilst it’s definitely more indie than punk, and perhaps even inspired by Moose Blood (but if Moose Blood were less emo and didn’t drink so heavily). Like almost all of the songs on this album, it’s coated with a layer of sweet sugariness, whilst hiding a darker undertone of a message. In terms of musical influence, it’s one of the songs on the record that sounds very different, what with the inclusion of a piano in the background. The chorus of this song is so infectiously catchy that it doesn’t matter if you only listened to it once, it’ll get stuck in your head for the next three days. A million types of fun to sing along to, with wonderful metaphors about letting a healing process go at its own pace, otherwise it’ll never get better.

‘Critical Mistake’ not only reminds me of State Champs’ song Critical and All Time Low’s ‘Bail Me Out’ in terms of the guitars. The song opens up with a ‘voicemail’ of an angry significant other demanding to know why she’s being ignored. Again, it’s adorable, sugary punk—but perhaps less punk and more alt-rock inspired. Truthfully, despite this song being an absolute blast from start to finish, I’m not sure that it mashes well with the rest of the album. In my opinion, it would work better as a bonus track on a deluxe edition or perhaps as a stand-alone single. It explores a deeply unhealthy relationship where Barlow admits that they aren’t good for each other, and wants to trust her but can’t. Without a doubt, my favourite line in the song has to be: “I could be everything you need/if you could learn to be someone else.”

‘Wish You Were Here’ is the first acoustic song of the record. A chance to breathe after all of the enthusiastic, fast-paced punk. It explores the death of someone close to him, and how he wishes that he could get some of that time back, how he feels that he should have called more—just done more. A song that goes into painfully personal details about the day of the death, “singing along to a song from three summers ago/now I’ll always remember it as the song that your life ended with.” In a more colloquial sense: this song takes your heart, yanks it right out from your chest, stomps on it and then leaves it for road kill.

‘Heavy Lies’ swings right back to the fast-paced guitars and bass. It’s still slower than the songs preceding it, thoughtful in its execution. A song all about exposing the most fragile parts of yourself to someone, and wanting to trust them despite having been hurt in the past. There’s a subtle shift of themes here, whilst in LNOTGY Barlow focussed on heartache and heartbreak (‘December’, ‘Kali Ma’ and ‘Lime St’—just to name a few), TPATP focusses on the healing and the tenderness that comes with finding someone new, and finding someone to love and trust. Unlike perhaps more ‘generic’ love songs, where the goal is to make the intended audience feel as though the song could be about them, the beauty of these songs is that it is obvious they’re about someone, and that is charming.

’19 Seventy Sumthin’ ‘is an old school, retro inspired track. Bubble-gum wrapped sweet punk. One of my favourite things is when songs span several years in terms of narrative, and this is one of the things that made this song an instant hit for me. It takes us through the night that the couple first met, the wedding and several years down the line when they have children. The guitar in this song is absolutely wonderful—intricate and complicated and the perfect accompaniment. This song lulls you into a false sense of security, as it fast forwards to ‘2000something’, and the couple in question have everything they’ve ever wanted (‘Grandkids and the mortgage paid off, is this what dreams are made of?’) Only to then pull the rug out from under your feet: ‘But nothing could save him from the Ambulance that day, when he went away’. The song has a horrible sense of cruel irony, that they made it this far only for the worst possible thing to happen at what feels like what is supposed to be the best time. The cacophony of instruments at the end of the song really works to its advantage as it displays the grief of the situation.

Closing off the album is ‘Where Do We Go When We Go?’ like Motion Sickness, this was one that I had to listen to a few times before I liked it, but it’s slowly growing on me. Unlike other songs that deal with the same or similar themes, the need for answers here about death and the afterlife aren’t as demanding and instead seem to be more on the reflective side. The chorus, which is done in the style of a children’s nursery rhyme is incredibly effective as it gives the song a more haunting vibe (‘I just want to get one up on life before it kills me’).

Before I finish up, I ordered my pre-order with HMV as there were two exclusive tracks that came with it, but unfortunately, they didn’t hold much of a candle to the rest of the album and felt a little samey.

This is an album that is thoroughly enjoyable and even the weaker songs are a ton of fun to listen to. The lyricism here is without a doubt fantastic, and the best that Neck Deep have ever written. This album takes you on a journey—you experience every word and emotion that Barlow sings and you can just feel the amount of raw emotion that went into the writing process of this record. Despite the mish-mash of musical influences, this album is still Neck Deep through and through, and each experiment into a different sound had both good and bad elements, but it’s just that—a learning curve. The instrumentals throughout each and every song are a delight—strong and confident and seamless. You’d think that Neck Deep would have wedged themselves into a corner with the success of LNOTGY, and as the release date loomed ever closer, I looked at the calendar with a sense of almost unease. How could any release possibly compete with the brilliance of LNOTGY (which even two years later is still one of my favourite albums). The answer, however, is simple. It competed, and it competed with ease. Thematically, lyrically and musically. But, at the end of the day, the album’s name summarises it better than I could; it truly is: the peace and the panic.