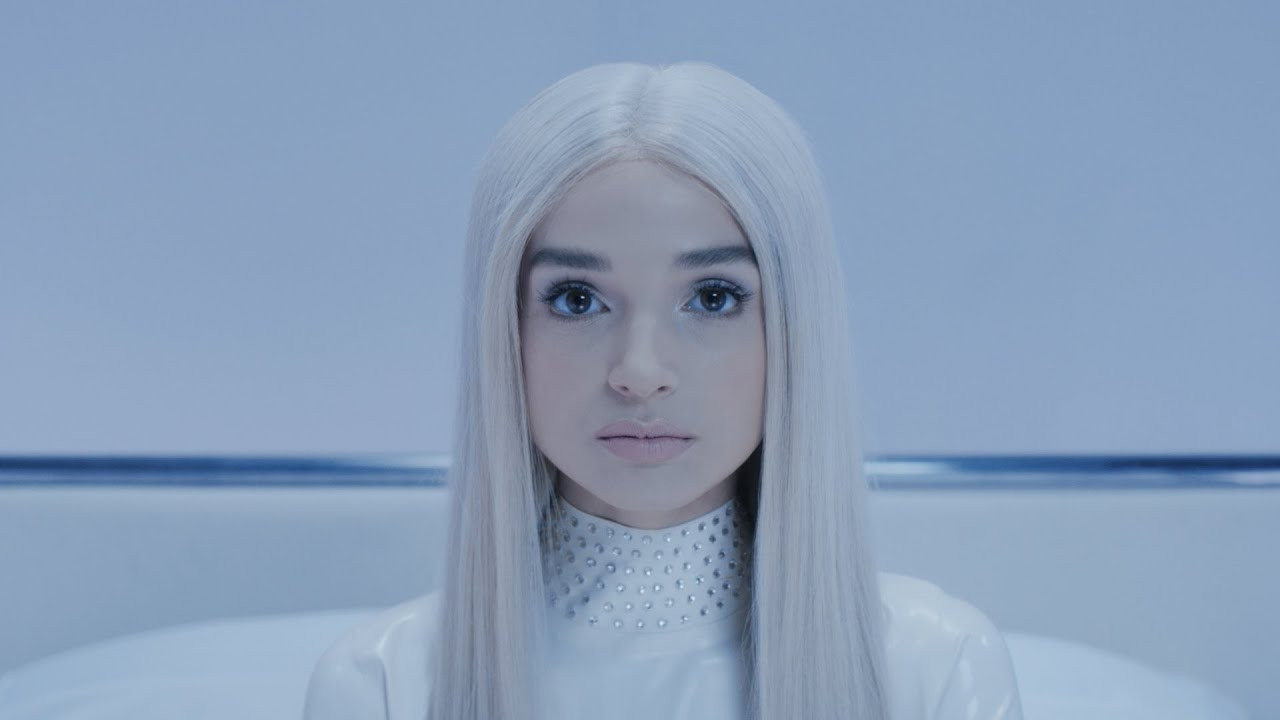 From her early days as an eye-opening internet sensation to her now heavily anticipated genre-bending, third studio album, Poppy has constantly been capturing audiences in new and unexpected ways. Whether it's her unnerving resemblance to AI, or her unique and sinister sound, it is fair to assume that something about her has caught your eye (and ears).

At the dawn of the new year, Poppy’s third studio album dropped under Sumerian Records marking not only a milestone in her career, but a sure-to-be milestone within the world of heavy music. There is no disagreeing that ‘I Disagree’ is a monumental step forward in the future of our favourite sound.

‘Concrete’ served as the lead single from the album, released in mid 2019 in order to promote the album to come. In true Poppy style, the track is a perfect fusion of metal against pop; a jarring juxtaposition of two polar opposite sounds. In some ways, I believe it is this fusion that makes her tracks so malevolent. Who would expect such an angelic voice to conjure up lyrics like “Bury me six feet deep/Cover me in concrete/Turn me into a street”? Much like the track ‘X’, it can sometimes feel like you are listening to a duet; two voices and two minds. But no matter how contrasting, her tracks always become cohesive; tied together by the musical skill and individualism she has acquired over her growing career. ‘Concrete’ defeated all boundaries, and when looking back, is a perfect representation of the pure ‘Poppy-ness’ that ‘I Disagree’ is filled with, acting as an enticing start to this musical journey.

Title track, ‘I Disagree’ came as the second single from Poppy’s third studio album, delivering more excitement to eager fans and listeners. Within this song, the room for vocals is clearly extended, adding a new found layer to this album. Unlike chanting verses and short strings of words that are most common within Poppy songs, the chorus of ‘I Disagree’ in particular adds a new and unforeseen layer of depth. I found this track also added to the theory of Poppy experimenting with a genre called kawaii metal. This is something that I must discover more about, but to my simple understanding, relies upon heavy instrumentals accompanied by melodic pop vocal aesthetics! This is something that is clear in a few of her tracks and is evidently something she may be tapping into, paying homage to bands who pioneered the sound and took a leap into the world of individualism. Foraging into a new dimension of sound and style, ‘I Disagree’ acts as a worthy spokesperson for the album.

‘BLOODMONEY’ comes as the third single from the album. They say the third time’s a charm, but in this case, the third time's a portal to a new genre. ‘I Disagree’ was promoted as the first full length metal infused album of Poppy’s, released under hardcore heavyweights, Sumerian Records. So far, that fusion has been undoubtedly clear, with a heightened sense of classic metal elements within the pop. ‘BLOODMONEY’ taps back into a harder electronic style intertwined with metal, tip-toeing slightly into the world of Nu-Metal. Such pronounced beats never really go astray, but are much more striking within this track, creating a real stand-out single. ‘BLOODMONEY’ is fresh and exciting. Skilfully blending in elements of nu-metal, this song has a real edge that will leave you wanting more.

Within an album that blends genres that have all been created in order to provide freedom and individualism to musicians, ‘Anything Like Me’ comes as an important track within the project. Resembling the mixed sounds of ‘I Disagree’, this track illuminates the harsh battles that one faces not only between others, but themselves. Growth is an unstoppable force, a force in which Poppy plays upon within this track; “I feel her heart beating in me/Get her out of me”. This clear sense of pleading works to highlight the person she once was, and how it has now become separated from who she has become- a result of her tremendous growth throughout some disastrous circumstances. This small glimpse into her mind depicts a much larger story of her growth. Through this track, it is evident that ‘I Disagree’ is bringing her one step closer to the individual she wishes to be. ‘Anything Like Me’ sees Poppy ‘becoming someone’... becoming herself.

In perfect synchronisation, ‘Fill The Crown’ adds to the previous notion of individualism and freedom. After following the story of her growth and change, it comes as a reassurance to see the lyrics; “You can be anyone you want to be/You can be free, you can be free”. Contrasting the restraints set by others within the last track, we see Poppy holding authority over herself and accepting who she was once kept from being. This note of individualism comes as an important moral lesson for listeners, and is a heartwarming representation of the journey faced by our loved artist. ‘Fill The Crown’ also captured me due to its musical diversity. It has been established that ‘I Disagree’ explores a wide variety of genres, but within this track itself, a multitude mingle together. This eccentric flow of sounds that really shouldn't match only enhances the messages of these songs. Individualism has power (and also makes a catchy track).

The next two tracks, ‘Nothing I Need’ and ‘Sit/Stay’ are both powerful songs that tackle important and similar issues. Both act as a heavy illumination of the threats within the world of music and fame. ‘Nothing I Need’ works to destroy the enticement that the music industry brings to its soon-to-be victims; “Something strange happened to me/All I ever wanted, it was nothing I need”, painting it as dream that when discovered, offers a harsh reality. Moreover, ‘Sit/Stay’ taps into the musical dream once again.The song depicts it as an opportunity that blindsides, placing expression into a cage and numbing the thought of vibrant minds; “Don't go blind from the stars in your eyes/Welcome to the new starting line”.These tracks hold such jarring commentary upon the world of music, and to me, highlighted situations I had never really focused on before. Yes, the music industry is harsh, but what is it really like behind closed doors? Is it worse than we uninformed listeners could ever imagine? ‘Nothing I Need’ and ‘Sit/Stay’ were truly thought-provoking songs, bringing attention to often unspoken topics.

Track eight presents ‘Bite Your Teeth’, a track that I can safely label as my favourite. Perhaps this is due to its sharp resemblance to ‘Scary Mask’, an earlier collaboration between Poppy and Fever 333. The instrumentals are everywhere, the vocals change from angsty to angelic, the whole vibe of the track is chaotic. There is no better word to describe it than amazing. ‘Bite Your Teeth’ is a perfect example of creative freedom. Poppy is breaking the mould in a way that pushes all the edges, delving into new sounds and creating music that makes people squirm. If someone doesn't experiment, then how will we ever know what it sounds like? This track would also have to be the most ‘textbook’ metal track off the album. The breakdown and the ‘blegh’ were both elements that sent listeners into a spin, and quite frankly, they make me excited every time that part is reached. ‘Bite Your Teeth’ flashes elements of metal within Poppy’s unique and often chaotic sound, creating a showstopper of a song.

The last moments of the album are captured within ‘Sick of the Sun’ and ‘Don’t Go Outside’. ‘Sick of the Sun’ is particularly sombre, stripping back instrumentals, putting the spotlight on lyrics and vocals. Being the most pop-infused track on the album, it comes as a refreshing sound that elegantly inserts itself into an at times chaotic track list. Soothing melodies make this track an easy listen, directing the listener all the way to the closing track, ‘Don’t Go Outside’. Yet again presenting itself in a sombre way, this track is haunting. A simple beat matched with Poppy’s iconic, entrancing vocals creates nothing short of an eerie atmosphere. It is only ever disrupted by quick flashes of guitar solos, then returns back to the harrowing sounds of before. Despite this, it is certainly not an underwhelming finish, instead leaving a lingering feeling upon the listener; an everlasting essence of the album of ‘I Disagree’.

Through a mere ten tracks, Poppy’s ‘I Disagree’ album showcased the best of many genres, filtered important messages to the audience, and became an anthem for growth. Not only do the lyrics speak of a need for individualism, but the unhinged production and chaotic nature of some of the tracks put this notion into action. Not only does this show Poppy practices what she preaches, but it depicts the bravery of her being. Her creativity and talent is unique and entrancing and within her third studio album, has created a selection of songs that are refreshing, powerful and truly mind blowing. Poppy’s ‘I Disagree’ is a perfect representation of creative freedom, self expression, and the future of unrestricted music.