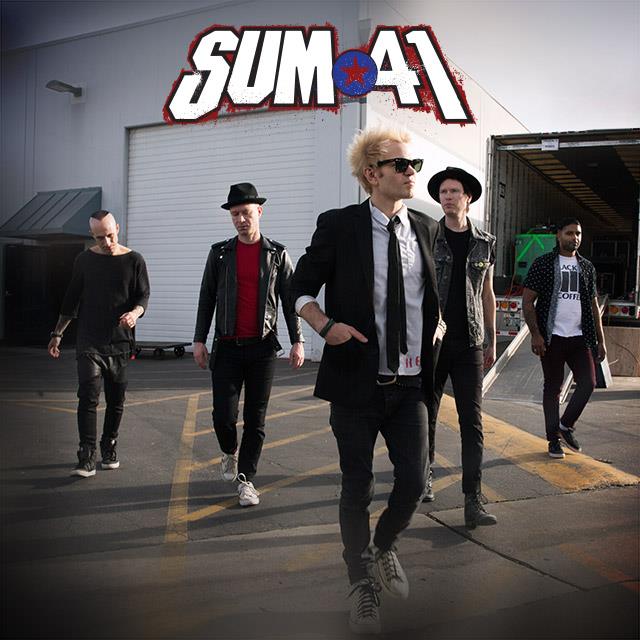 It's been a long time coming: Sum 41 are back with a brand new record '13 Voices' after years of inactivity.

The band's previous record 'Screaming Bloody Murder' was released back in 2011. After the tour cycle ended in 2013, the band fell off the grid. Simultaneously, drummer 'Stevo' also departed, leaving the band with an uncertain future. To top it all off, frontman Deryck Whibley was struggling with an alcohol problem at the time, and was in rehab to deal with this problem.

Bottom line, no one, including the band members themselves had any clue what the future held. Time passed, when finally in the summer of last year, the band announced they'd be playing a set at that year's APMAs. The band performed several old fan favourites and it felt like we were teenagers all over again. With the performance came the announcement that founding member and guitarist Dave Brownsound would rejoin the band after he had left a few years back due to 'creative differences'.

Frontman Deryck Whibley's struggle with alcohol as well as his road to redemption is the center of this album, transforming into the powerful lyrics off of the new record, 13 Voices, which we'll now review, track-by-track.

Electronics ring out and strings join in. There’s a clearing of air, an opening of space and the setting of a stage. 13 Voices has begun. “Take me away!” is the call, and rock guitars and heavy drums join in. As the first track on what could be considered a comeback album, 'Murder Of Crows' distinctly feels like taking a stand, setting of boundaries and preparation for what is to come.

As we move into track two, 'Goddamn I’m Dead Again', it is guitars and a build up courtesy of the drums. This song feels like a death of the old and being defiant about it. Breaks of silence in amongst complicated guitar and slick drumming feel like another act of defiance; look how controlled we are, look how together we are. As a band, Sum 41 are here as a cohesive and unbreakable unit and they are ROCKING it. A standout on the track is a guitar solo which is off the planet cool. There is no doubt about the exceptional skill and experience these guys have and they are ready for it to be recognised and enjoyed again.

'Fake My Own Death' as track three of 13 Voices again has me somewhat lost for words with how musically slick Sum 41 are. They work together like a well-oiled machine and almost show off with pauses of silence in their music before launching back into perfect rock. This feels like an instant hit and it doesn’t surprise me that it has a music video released. The video is a (hilarious) poking at how cheapened and shallow popular culture has become. “I wanna see something that’s real”. Amen to that. The bridge is a sweet demonstration of a softer vocal inside their rock boundaries.

We get emotionally deeper (and musically lighter) with 'Breaking The Chain'. This song feels like a hard look at what happened for the band and Whibley, despite not necessarily having wanted to face it. Impressive rock guitars, and electronic accents build hope along the way. There is hope that the chains of difficulty are breaking more and more all the time, even if not fully broken yet.

To put it bluntly, 'There Will Be Blood' is creepy as fuck. Lyrically it talks about ‘kings’ trying to control and take the souls of ‘the little ones’ (“and that might be you”). It is possibly on the same vein as Fake My Own Death, as a commentary on society’s falseness and subsequent manipulation, or commenting on something even more sinister like pedophilia. The drums are stellar, as are the backing vocals, lifting the song which could be far more dark and heavy than it ended up as.

Already in the introduction, '13 Voices' has a feel of being a classic epic of a song. This is a song with a lot to say and it makes sense that it is the title track. Musically it moves across different timings and feelings, all building this sense of importance. I am struck by how well the Sum 41 guitars ‘speak’, communicating the emotion, as opposed to the expression hinging purely on vocals. Lyrically, the song makes a statement to not to look at him (Whibley) as a role model, and how harsh judgements can be upon those that go through tough times in the public eye: “Have it your way and crucify me.” There’s a sense of needing to break through layers of criticism in order to get free enough to make a change. Sum 41 have had to claw their way back to this point.

In the face of the heaviness and darkness of the previous tracks, 'War' comes in with a lighter feel and a simpler sound. Whibley was quoted describing the process of War coming to life in a way that sounds almost like divine intervention. This is a pivotal song and the clear vocals are here for good reason. Whibley says, “I was at a tipping point where I could have easily just given up and went back to my old ways of alcohol abuse which would’ve ended up killing me, which at the time felt like a better option. When all of a sudden, in mid thought, these lyrics sort of appeared in my head and i grabbed a pencil and paper instead of a bottle and started writing. When I read it back to myself I realized I had written words that I would need to live up to if I wanted to survive. whenever I had any thoughts of giving up I would read these lyrics myself to remind me that I need to keep fighting harder and what it was exactly I was fighting for."

Before I heard track eight, I was already smiling at the title: 'God Save Us All (Death to POP)'. The music video has Whibley talking about unity with people through music, and how this is something experienced through rock. He says “I don’t think you feel anything with pop” and is making commentary with this song on the importance of sharing raw and real emotion through music. The bouncing beat and rock energy together with that sentiment make this into an anthem for real-feeling people who “don’t know how to fake it”. It's a stand-out on the album and would be insanely cool to experience live.

'The Fall and the Rise' kicks off with guitar before a vocal head-to-head (a la ‘Fat Lip’) which nudges out of rock and into something else. Either way it’s another nod toward breaking through limitations of self and of judgements into something new, like War describes. There’s a beautifully clear bridge, a moment of tender honesty of this journey for the band. The lyrics are a powerful affirmation for Whibley and the band in relation to their return to the good that was once theirs: “It’s time to take back the place where I belong”. The timing changes in this track are awesome.

The album’s final track 'Twisted By Design' feels like an expression of gratitude, for being on the way back and having made it as far as they have. “Time is all I need to get things right / One more chance to catch the light” The guitars and drums are grand in the choruses, supporting the determination and will to move forward: “I say with every beat of my heart / I alone will find my way / And get right back to the start”

Whibley may feel that he is ‘twisted by design’, but the songs on '13 Voices' show just how much depth of growth he has gone through since their last release; has HAD TO go through by the sounds of it. With this new album’s tracks we also get insight on how he intends for Sum 41 to get back to where they deserve to be. Doing it right and with soul, regardless of and in spite of the judgement that has come their way.

'13 Voices' is bound to excite Sum 41 fans having waited for new music, not to mention build excitement for what is to come next as the band continue their personal evolutions fueling their musical growth.