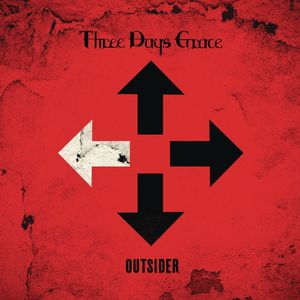 Working in retail is daunting and often, exhausting. But sometimes, there’s moments where it’s quiet and you get to have a little fun. That’s what happened yesterday, when my sister and I spent the better part of twenty minutes reminiscing on old songs from the early 2000’s. Fall Out Boy, Red Hot Chilli Peppers, Breaking Benjamin—we put them on YouTube and suddenly we were young teenagers again, and the world wasn’t all that complex. One of the artists that we spun was Three Days Grace; a band that I never listened to growing up, but my sister did. Formed in 1997—they’ve had a rather illustrious career in the alternative scene, with six studio albums to date. Let’s see what their newest album, The Outsider had to bring to the table.

The album opens with ‘Right Left Wrong’ and we’re greeted with a dramatic, operatic piano, which lends itself for a gothic taste. Then, it transitions to an electronic keyboard before the shredding guitars open up the breakdown. Lyrically, however—this song veers a little on the cheesy side. In it the band sing about wanting to ‘run away’ and how anywhere is better than where they currently are. On some level, it appealed to me and my inner 14-year-old emo—but as a 21-year-old, it left me feeling a little apprehensive about what the rest of the album would bring.

Thematically, ‘The Mountain’ is very similar to the opening track, with the exploration of needing to keep going and never giving up. Though we, as the listeners are given a taste that the band has faced some adversity, we’re never really given an idea of what it was, which makes the lyrics a bit more difficult to relate to. As I was listening to this album, I was trying to place of what it reminded me of; musically this album is a mix between Foo Fighters and Nickelback.

‘I Am An Outsider’ is the first song on the record that focusses more on electronica and the drums. The gruff and rough vocal style does help with the delivery of the song, but the beat of the drums quickly starts to feel repetitive, and the lyrical content is everything that we’ve heard a million times before (‘I am an outsider, I don’t care about the in crowd’). Not only in recent times, but almost any alternative song from the early 2000’s onwards. Musically and instrumentally, ‘Nothing to Lose but You’ was one of the most interesting songs on the record. The acoustic guitar that opens the track—along with the drums that kick in really help to build the intensity of emotion. The fact that the song starts off quiet and then adds instruments one by one in a cacophony really helps to build the reflecting, pleading nature of the song.

Skip forward a song and you find ‘Love Me or Leave Me’. The change of tone thematically is definitely a little jarring, especially considering that this is leading on from the taunting, chant like predecessor that was ‘Me Against You’. It’s quite similar to ‘Nothing to Lose but You’, but immediately a lot more aggressive. The vocalist, asks, pleadingly, whether or not this relationship can work—claiming that he’s been ‘left behind too many times’. One of the most notable things about this album is that the instrumentation is nice to listen to, it’s interesting and energetic. However, the negative side to this is that the choruses, which are arguably one of the most important parts of the song—don’t shine much of a light to the instrumentals. They’re repetitive and start to feel as though they quickly wear out their welcome.

‘Strange Days’ opens up with an echoing guitar, lending to a more dramatic feel. Here, we’re warned that ‘strange days are coming’, perhaps it could be a religious reference to the end of days—or perhaps feeling as though they no longer fit in in the modern world and feeling like an alien. Musically, it’s one of the stronger tracks on the album—the guitars are soaring and confident, and all of the elements of the song work together brilliantly.

When it comes to the narrative element of the album, ‘Chasing the First Time’ sticks out like a sore thumb. The references to drugs and alcohol aren’t mentioned anywhere else in the album, especially seeing as the album has had a focus on relationships and growing as a person. Their attempt at providing us with a narrative driven song are admirable, but unfortunately, it doesn’t work. The references to drugs and alcohol feel forced, especially as they seem to romanticise the addiction lifestyle.

The almost isolated vocals on the beginning of ‘The New Real’ work well, adding a haunting tone to the song. However, one of the biggest problems with this album is the attitude towards those who choose to ‘conform’, and it’s especially prominent on this track—and the insinuation that their way of life is better makes it a bit difficult to root for the character portrayed within the song.

Some parts of this album were incredibly refreshing—the guitars were a joy to listen to, and the blend between operatic rock and more classical rock lent itself for an incredibly atmospheric album. However, lyrically, and thematically, this album was lacking. In terms of a narrative, this album lent itself on lyrics and stories that we’ve heard a dozen times before—making it much less enjoyable to listen to and more of an amalgamation of themes and lyrics that have been done better by other artists. ​