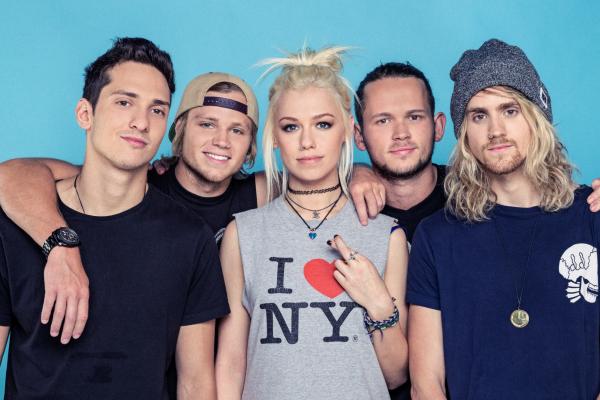 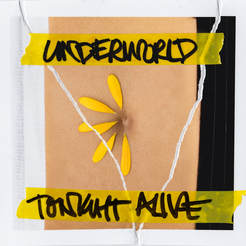 Over the last few years, I’ve had a pretty touch and go relationship with Tonight Alive—not because I dislike them, on the contrary, they used to be one of my favourite bands.
​But, I started exploring a whole plethora of new music, and Tonight Alive just couldn’t seem to shimmy their way into the mix. Their sophomore release, ‘The Other Side’ was up in my top ten albums for a long time,  and when I was at school, I’d sit there with my earphones jammed in listening to ‘Lonely Girl’ on full blast (usually, but not always, ignoring a mountain of work). Their newest release, Underworld reminded me of why I started listening to them to being with. Whilst definitely pretty far away from their punk rock roots—it’s an evolution of sound that helps to highlight just far they’ve come.

The album opens up with ‘Book of Love’. The immediate electro pop influence and the almost tribal sounding drums help to carry Jenna’s vocals. And even though the chorus has hints of punk rock influences, it feels a little inconsistent with the beginning of the song—and for me personally, the two styles didn’t feel as though they mashed well. Even Jenna’s usually phenomenal vocals sounded a little drowned out by the instrumentation. In terms of an opener for the album, it left me feeling a little sceptical and worried about what the rest of the album would bring.

Skip forward to the last single to be released, ‘Disappear’, featuring guest vocals from the PVRIS’ very talented front woman, Lynn Gunn—it shows the band perhaps venturing closer to their roots and definitely reminiscent of something that could have potentially found its way onto ‘The Other Side’. The bass line here is a lot more forgiving, letting Jenna’s vocals take the lead. When I was listening to the album the first time around, this definitely stood out as one of the strongest tracks (at least when it came to the opening half of the record). It’s a song all about exploring, and well, disappearing (for lack of a better word). All about having big dreams, and not quite knowing what to do with them—an anthem, if you will, for all of the lost dreamers who never felt as though they quite fitted in with their peers. The subdued guitars work brilliantly on this track, centring the listener and bringing forward a mellow, contemplative mood.

Skipping forward and listening to ‘In My Dreams’, musically it’s almost identical to the song that preceded it— ‘The Other’, and it didn’t bring anything for me that made it stand out. The narrative is interesting however, as Jenna drives home the message of being unable to find a place to call home, of ‘feeling alien’, as she puts it. The theme of the album, at least in the beginning is subtle, but it’s there. All about needing to look beneath the surface and perhaps needing to go through a metamorphosis in order to become a better version of yourself. Tonight Alive do what Tonight Alive do best. Take personal anguish and turn it into triumphs.

The bass line in the opening of ‘For You’ is reminiscent of something that you might hear in an early 2000s pop song, but it works. It brings home a nostalgic feel, as from here onwards—the album begins to take a sombre, self-reflective path. ‘For You’ is a song that hit pretty close to home for me, as Jenna sings about being hopelessly in love with someone that she’d do anything, overcome any obstacles all for them. It is without a doubt one of my favourite tracks.

‘Burning On’ is another song worth mentioning. The longer intro, especially with the inclusion of the keyboard gives the song a nice, fresh feel. ‘You want to fall in love, but not too deep’ is a line that catches the imagination straight from the off. It’s a wave to anyone who’s ever held a potential romantic partner at arms-length, out of fear. It’s about harnessing your emotions and using them to live the best life that you can, and embracing your feelings so you can experience the very best that life has to offer. It’s a truly beautiful song. Uplifting and melancholy.

The muted instrumentals on ‘Waiting for the End’ bring forward an even more sombre tone as we head into the final three songs of the record. The album definitely starts to feel a lot more confident in the latter half—it finds its feet and continues bringing out great song after great song. The musical style becomes a lot more consistent, a great blend of pop and alt rock, and the lyrical content is poignant, relatable and it just urges. ‘Waiting for the End’ is yet another song that is an anthem for not cowering behind life, seizing the day and never allowing yourself to just exist. The heavier rock influences near the end of the song are a little jarring, but are by no means a bad addition.

‘Looking for Heaven’ is a wonderful piano driven track. One of the things you’ll notice as you listen through this album is that even though the latter songs are slower, and more thoughtful—they never stray into sounding boring or repetitive. ‘Looking for Heaven’ is another one of my favourites because it’s all about finding the time to be mindful, of yourself and of others. It’s an ode, an anthem of trying to find a perfect place, one where everything makes sense.

This album is a summer night. It’s listening to it in the middle of the night, staring up at a navy-blue sky with a smattering of stars—feeling inspired and insignificant. It bolsters you up but also lets you think about where we belong, not just in the world—but in the universe. Despite some hiccups in the opening half, especially coming to musical styles and influences, it’s an album that’s still worth listening to. The album is first and foremost, a feeling. It’s a feeling of weightlessness but also of shackling responsibilities as we journey through life, learning and growing with each encounter.