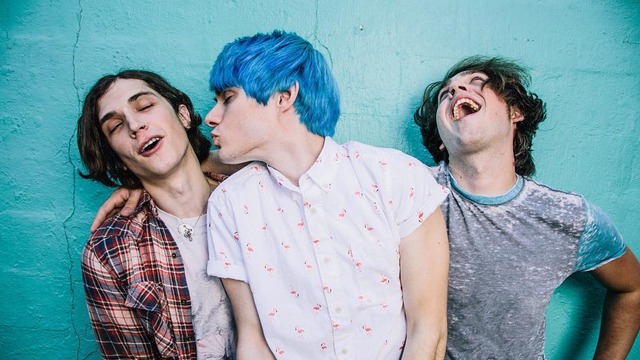 If Waterparks’ new album, Double Dare, was a movie, it would most certainly feature a scene where the Waterparks band members (Awsten Knight, lead vocals & guitar, Geoff Wigington, backing vocals & guitar, and Otto Wood, drums) would be outside a crush’s house, with boombox suspended up on high, declaring their affections. Double Dare is the epitome of honesty and vulnerability, with (thankfully) little regard for having a particular sound prescription.

Let’s go track-by-track into this collective of cohesive pop punk music, where Waterparks have opened their minds and hearts, with relationships and respect the topics of discussion.

Double Dare kicks off with Hawaii (Stay Awake) and it’s immediately into electronics and vocal effects. This song smells like Summer and sunscreen and tickles my insides with excitement. This song is like a smile that you feel on your face that can’t be dampened. It’s that sense of being inspired and alive so much that you’re not needing to sleep. The lyrics refer to dark times ("a hurricane in my bedroom"), but also refer to them being "old news" and how they are "over all the stale days". There are a lot of question marks, but hope lives! There are moments of silence/quiet during the track that give that sense of flying high on potential. The drums are killer and there is a kickin’ outro.

Gloom Boys doesn’t sound gloomy at all. (Wait. They sing, “I like happy songs with titles that don’t match at all..” Touché, Waterparks) This song is a little more sedate than Hawaii (Stay Awake) and I could see it being set in a bar, dimly lit, and with someone drinking and introspecting. The bassline is so very smooth on this track, the guitar rocks and the lyrics kick ass. It’s not a lyric per se, but the “oo-o-oh” at the end of lines is sick. The moment in the song which says “on the ceiling” gets me every time. There’s a lounge bar-esque interlude that’s very cruisy and the line “The boys are back / The boys are sad” is so very honest that it gets under your skin.

I got a little goo-goo-gaa-gaa (aka ‘stupid’) over Stupid For You. That tripping over yourself feeling. So in love that you’re clumsy. It’s sweet and cute, like a puppy dog fixation. “Tell me what you want me to say” say the lyrics, perhaps because he’s lost control over his brain cells because of the love of his life. (Awww) I was so swept away in the immersion, as well as this drenching of compliments, that I barely noticed specifics of the music, but as the other tracks, it’s slick and real. It’s excellent, but not polished within an inch of its life. Just how I like it.

Next is that earworm that you’re going to need some kind of pesticide for; Royal. To me this song is about angsty complications and frustrations. Wondering why they can’t get what they want, but also wondering what exactly do they want and how do they want to be. There’s questions of adequacy and if they’re even equipped for what they want. This is a self-doubt blanket over a song that’s (to put it bluntly) catchy AF. [How ironic is that, Waterparks?! A song about wanting more than what you are that is going to set you on fire as a band. Just saying.]

Take Her To The Moon was really cool to dive into because it started off feeling like nothing, and then I realised that this nothing sensation was being suspended in space and time, while being (...wait for it) IN LOVE. The lyrics are beautiful: “Can you really get lost in heaven?” “I want to live inside your mind beside your favourite songs”. It really communicates that beautiful love-fog laden sense of being lost adrift inside someone; that deep love and oneness of immersion into another. A focus on electronic effects, impressive drops, voice effects and sound layering enhances that experience of having an all-encompassing feeling that takes you over.

The next track, Made In America, is more grounded in reality and is heavier, featuring kickass guitar and drums. To me this song has a focus on the element of performance as a band and makes a statement of “Look how well we ROCK!”. And yes, they do. It has a sense of wanting to prove themselves ("maybe someone's"), yet also communicates just how much they do actually recognise their own talent, or that they're at least okay ("we're fucked and we don't care at all"). There’s a deliciously frantic ending.

If there’s a song that could communicate the experience of an anxiety attack, it’s the next track, Dizzy. It has a cool start with claps and isolated vocals but when high-speed vocals kick in with the verse, the claps just feel like colliding thoughts (sounds) and hecticness. It could all be seen like a thumping head, with a lot going in, such as insecurity and emotional overwhelm. The noisy and active instrumental tracks communicate that sense of mental busy-ness, as does the ear-swapping audio and octave switching outro. It’s exceptionally well done.

The next track, Powerless, kicked up the romanticism a further notch. The vocals hadn’t even started before I got an ouch hit in the heart, like “Tell me that you love me”. There’s no sense of personal power or any clear direction, just waiting to be filled by another, like “I’m nothing without her”. Ironically there is a really powerful notion of the nobility in assuming this role, and of doing the right thing and being a gentleman. This song is the epitome of Jake Ryan from Sixteen Candles. Musically this is perfection of a pop punk ballad.

Little Violence is electronics mashed up with punk as the band rant about disrespect. It comments on those that have doubted the band and doubted what they’re doing creatively. Just because Waterparks are writing emotively doesn't make them weak or unlikeable. But even this rant seems to be softened by a justification for it? (“Maybe I’m tired”) I can completely relate to the lyrics about losing oneself in writing, and coming back down to earth with connection to the people that matter.

I love 21 Questions so much. It’s so vulnerable lyrically that it could be seen as a risk to have it appear on an album. Good on Awsten for going for it and writing in a way that is a metaphorical heart on a platter. It’s an acoustic gift to our ears and the beauty comes through vocally too. This sounds like a song of a fling (in this case he is the ‘other man’) that wants to be so much more, with someone who is not forthcoming. It might even make you cry. Can’t we all relate to being with someone and wanting and waiting for more and not knowing if it’ll ever come? The potential for (eventual) rejection kills. The repeated question “But then what?” is simple and powerful. Everyone in those shoes wants to ask 50 gazillion questions until the object of our desire says “OKAY YES, I AM ALL YOURS” and we can finally relax. I loved how the song amps up with the question of “Am I in his position now?”, meeting reality face to face, accompanied by pummeling punk rock beats and guitars. Just amazing.

It Follows felt like a sense of conflict; of being oneself and liking oneself, but also noticing that this is at odds with the world around them. The vocals are light, flowy, and husky, while rocking drums and guitar dance over and around them. I loved the screams/shouts on this track and related it to a sense of no longer playing nice, just being honestly oneself, irrespective of anything or anyone else. That fire roaring through and blowing away niggling doubts and question marks. ("I'm not scared of anything")

I briefly read a quote by Waterparks relating to stress affecting the creation of music and I feel like this has a lot to do with what’s expressed in Plum Island. To me this talks about wanting to just have fun, relax and be playful again, or at least raging against the cage of stress. The rest to be discarded and forgotten about. And if it's true that Awsten truly "couldn't tell her I adored her", then any decent chick would surely accept a song dedication...

The last song on the album is I’ll Always Be Around and the backing lyrics really set it up as the perfect track to close Double Dare. The vocals are light and I have to wonder if it’s deliberate, touching on commentary of wanting to be heard but also feeling hesitant. The song seems to talk about being a better boyfriend for someone than who they were/are with. Knowing that he could be so much better for them and would be devoted and loyal. There’s a really kick ass drum and vocal section before the last chorus is repeated.

Throughout Double Dare, Waterparks morph heaviness of punk with electronic effects to communicate their message and it works exceptionally well. The band need no containment to a particular genre. As well as being musically slick, this whole album seems quite romantic, which could be missed if all you hear is a bouncing beat.

To me, Double Dare communicates an overall mantra of “Do no harm. But take no sh*t.” whether that’s in relationships or as members of a band, and us listeners need to back the good guy (aka Waterparks!) in the metaphorical 80s flick instead of the jerk of a jock who’d treat us mean to keep us keen.

Double Dare is out now, from Equal Vision.