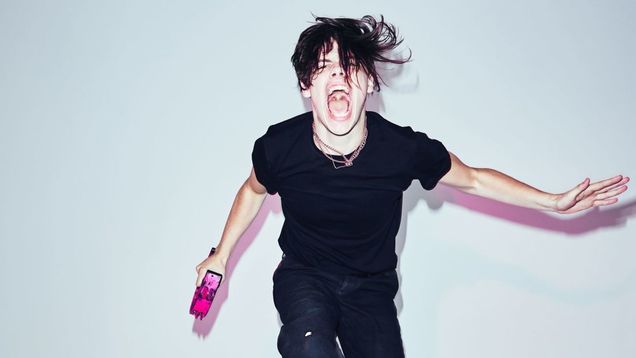 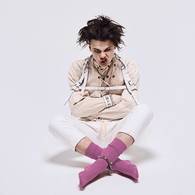 An alternative rock artist  hailing from Doncaster with a passionate perspective on hot-button issues, YUNGBLUD stirs the pot with his first full-length album, 21st Century Liability. Known formally as Dominic Harrison, this young artist who recently took the Warped stage makes waves with his controversial lyrics that encompass an energetic rock sound, with heavy bass lines and notes of ska. 21st Century Liability opens a new realm of rebellious rock music that new-age listeners are sure to bite on.

He opens with Eulogy, a contradictory introduction to the album that speaks on his opinions being silenced, and bluntly captures his “death” coming from being true to his ideals and speaking on social topics for which he carries passion. It’s a solid way to give listeners a brief outlook on the adventure that is about to come.

He transitions into his first full song, Die for the Hype, which is innocently introduced with an effervescent, child-like juxtaposition for a heavy song that seemingly depicts the image in his album cover. Right off the bat, he jumps in with “Tell me, did I just die?” as if to play off the prior Eulogy. He continues with this character that died having made an impact with his large voice and outspoken nature, which politicians scoff at. He cleverly confirms this idea with the tongue-in-cheek bridge, “I just wanna suck on your lolly, Polly”, in which Polly is a term coined for politicians. Mika’s “Lollipop” comes to mind when listening to this track, another outwardly innocent song that shows more underneath the surface. A rhythmic hook and striking chorus give this track a charm that is undeniable and provides depth that lures listeners in for the thoughts he has to express.

The following track, Doctor Doctor, again begins gently, this time with a beachy, tropical guitar riff that explodes into his rap-like verses. These lines exaggerate his contempt for doctors that attempt to restrain the normal behaviors and development of children and teenagers through medication or unnecessary procedures. In other words, kids should be free to be themselves. He again shows his unapologetic attitude toward the world, “I don’t wanna die, I don’t wanna cry, I just wanna be outta my mind.” His signature vocal sound, defined by his deeper range and quirky tones, shines in this track. Intentional production cues really polish this song and will have listeners queuing this on repeat.

Medication strikes me as a continuation of Doctor Doctor, further illustrating this image of kids being forced to take ‘medication’ by those who have authority over them. YUNGBLUD displays his disdain for the number of topics medication can represent, including political ideas and morale. In order to mask the attitudes of youth, we resort to medication, and kids are likely to feed into it because we look up to the ones we love. Medication is also exemplified through the bright music video with dark parallels, indicating that even what’s supposedly pure has more lurking under the surface. This track proved to be one of the more popular singles before the album’s release, no doubt because of the hard-hitting chorus and vocals. He uncovers a twist on pop music while still carrying that catchiness, much like the rising Billie Eilish in her track, Bellyache.

Track four taps into a darker, more pressing subject in modern history: gun violence. With unequivocal lyrics, the song entitled Machine Gun (F**k the NRA) (ironically censored) notes our fondness of guns in America and multitude of school shootings in recent years. He introduces a sociopathic character and his thirst for glory through gun violence, and that despite what may be disapproval from society for guns and growing emphasis on the “mental illnesses” of shooters, he will inevitably become famous, which gratifies his act. It definitely compares to the upbeat, yet disturbed song Pumped Up Kicks by Foster the People, which received critical reviews for its controversy. Besides the obvious catchiness of the song and heart-dropping line “You’re making me famous”, YUNGBLUD’s true desire for progressive change leaps off the lyrics. You can’t help but sing along to the tune’s chorus, yet you may not realize its initial meaning until further analysis. This becomes a definitive pattern in YUNGBLUD’s lyrics and dare I say, his established signature throughout the album.

Things take a simplistic turn with Psychotic Kids, with a slower melody and lighter instrumental. It acts as a sort of personal letter coming directly from YUNGBLUD himself, saying how he believes his words have been brushed aside by those with authority and underestimated due to his young age. The chorus is spoken through the mouths of adults and parents, stating that “they don’t know what they want; we’ve got to keep control of them,” as if to say kids truly have no say in change. He challenges these statements by saying “they don’t know fucking anything” and indicating that despite any criticism, he will not be silenced. He follows a sort of Gerard Way mindset in Teenagers in which he illustrates adults’ contempt for teens and their ‘inclination’ for rebellion.

Arguably his most popular release to date, Anarchist describes a child with ADHD that is, reputedly, medicated with Ritalin. The child is, therefore, an anarchist due to his nonconforming behavior, which is “not like the other kids”. YUNGBLUD expresses his lyrics more lightly here, exchanging his heavier rock style for a poppier sound with a choppy chorus. Despite its popularity, I don’t repute this track as one of the strongest songs in the album lyrically, but more so a glimpse into YUNGBLUD's head. Though it doesn’t fully express his opinionated mindset on social change, it’s a well-made introduction to YUNGBLUD’s music and a great starter track for a newer listener.

Though more a ballad of sorts, I Love You, Will U Marry Me tells a tale of a widely recognized sign that sits on Park Hill Bridge, in which a man proposed to a woman, of the name Clare Middleton. The story appears to be a lovely romance but has a more sinister twist in which YUNGBLUD explains the growing commercialization of the scenario post-proposal. It is one of the earliest tracks to be released from the album, and delivers the aforementioned ska inspiration and truly sits on its own from a rhythmic standpoint. That said, it holds a respectable spot in the album and I believe it to be one of the strongest tracks he has yet to release.

Polygraph Eyes sets a substantially different tone from the previous tracks. Covering the topic of sexual abuse, he illustrates the ever-growing relevance and importance of consent, especially in light of the Me Too Movement in recent months. I find it sitting alongside the pop group LANY’s signature style, carrying a mellow vibe that contrasts beautifully with the other fervid tracks in the album. This is a pleasure to listen to, with the gentle string work in the backtracking taking the spotlight in the bridge. His lyrics pair well with the instrumental and provide another layer of depth to the album.

Polygraph Eyes transitions well into the acoustic track, Kill Somebody, and takes a personal turn on some of his more aggressive tracks. Following a similar storyline to Psychotic Kids, YUNGBLUD displays his disdain for adults that turn children away for being “different”. His acoustic melody doesn’t mellow out his words, however, with the chorus defying authority and stating that he isn’t going to settle for being patronized. This track is an important song, delving into topics like self-discovery and expression, and reflecting deeply on his experiences as a child and teenager. Kids will likely seek haven in this track and its vulnerability.

His lively signature sparks back up in California, mirroring the same energy as the first half of the album. With a grander chorus and the same bold style of verses, he scoffs at conformity and again references his experiences with the ADHD inhibiting drug Ritalin. He wishes to take opportunities as they come without fear of being “controlled” or fitted into a box of supposed normality. Vibrant keys throughout the track give the verses an airy vibe, while still keeping an edgier dance beat.

YUNGBLUD’s energy is unwavering throughout the entirety of the album, but especially in the title track, 21st Century Liability. Powering into this track, he begins with a phone ringing off the hook, answering several times with a “Hello?” to no avail, until he hears a warped voice at the end of the line. When the introduction mentions “the spawn of the devil”, you know that this track is going to blast into acceleration. Heavy guitar and drums sport the zany verve of the track, with accompanying sirens and onomatopoeia (BANG! x3) from YUNGBLUD in the chorus. The verses tell a story of his self-discovery, and how he came to find that the world isn’t as rosy as he once thought. Through his experimentation of drugs and struggles with heartbreak, he may appear to be a “loose cannon”, but he’s using his experiences to evolve as an individual. Following an experimental Beck-like sound, such as that of albums The Information and Guero, YUNGBLUD finishes out a robust album with a (literal) bang and leaves listeners with a lot to look forward to in the coming future.

YUNGBLUD packages stories and liberal thinking into one, providing his growing audience with substance from which they can learn and transform, and grow alongside him. I'd love to see his style continue to reflect his progressive opinions, as these influences are far and few between in recent years. Teens will likely find YUNGBLUD to be an inspiring figure in which they can convey their own opinions, because even with his vehement voice, he still remains dignified. Though he’s charismatic and youthful, there’s maturity and wisdom that no doubt comes from his own path through adolescence. His observational skills about the world and social issues leave me and I’m sure many wondering, “Where has this artist been hiding?” Jumping from track to track is a completely new experience, with each transitioning into the next with a fiery ignition and a new topic to feed on. Though not everyone may be interested in his unconventional sound, he’s here to say, “he doesn’t give a fuck, really”. Despite sitting just shy of 35 minutes, YUNGBLUD’s first album is one to watch, and that I can’t wait to see blossom amongst alternative charts. More importantly, 21st Century Liability sets a foundation for YUNGBLUD’s style, leaving room for growth. He’s an exemplar of young talent and if he continues this path, I can already tell that for him, the sky’s the limit!