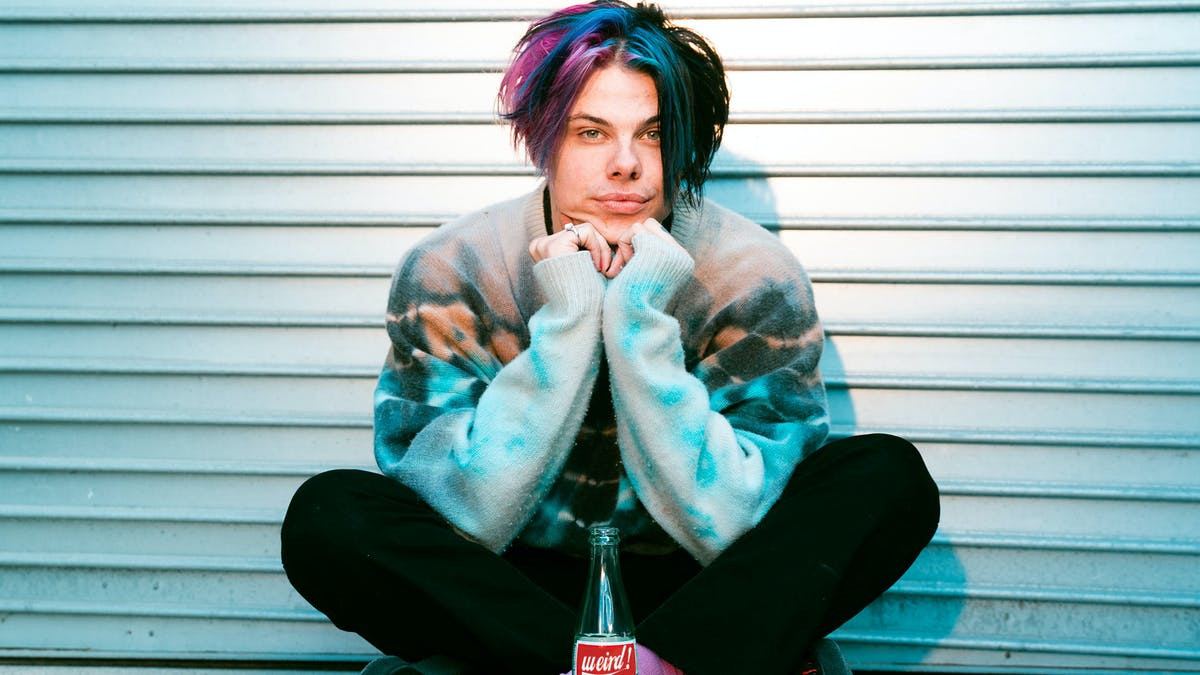 In the at times dull and dreary climate of 2020, there is no more suitable salvation than the bundle of energy, joy and hope that is Yungblud. Despite the outward persona of positivity and persistence, through his bounds of outspoken and moral driven music, we have come to know Yungblud as a voice for the youth, and the leader of a revolution. This energy continues to permeate through ‘weird!’, an album that celebrates community, connection, and the control we place upon our own futures. Throughout the journey of this album, so too is the listener taken on a journey of self-discovery, expression and individualism; a celebration of all the things we should embrace in order to face the world head-on. ‘weird!’ is not only an essential album for 2020, but is an album that embraces the unification of all; a necessary soundtrack to our changing future.

‘teresa’ marks the beginning of the album, in both a sombre and powerful manner. Anthemic and explosive, this song is made raw by Yungblud’s pleading vocals, some of which are powerfully dire, others which come in almost silent whispers that creep into every fibre of your being. As an opening track, ‘teresa’ is a haunting tune that, much like its lyrical content, consumes you and lurks with you, dragging the listener into the rest of the ‘weird!’ story.

In a year bombarded with isolation and incubation from anyone and anything, ‘Cotton Candy’ takes the form of an expressive anthem that reminds us of the fragments of human emotion and connection we have left, and the importance of being with one another. This track is undeniably catchy with a mellow and inviting beat- its summoning lyrics an invite for all to join in the message of this song. Its warmth and positive radiance begin to establish the connection the lyrics promote, making ‘Cotton Candy’ both true to form, and itself. Undeniably, Yungblud has created a song that not only promotes the unification of the whole, but permeates the feelings of love, individualism and being throughout your entire soul.

‘Strawberry Lipstick’ was revealed at the dawn of the new era- its teasing and promotion signalling a new beginning for Yungblud and fans alike. So too, this notion carried forward to the composition of this song- a track that channels abrupt and nostalgic punk noise, derived from the very roots of the local punk scene. Forceful in its ways, ‘Strawberry Lipstick’ became an intrusive but exciting earworm for what was to come. Today, as the album is out, it continues to be a foundational piece to the album as a whole, solidifying both the importance of experimentation and expression in such an album. This track continues to showcase the musical diversity of Yungblud as an artist, and his ability to find a comfort in expression within all musical vessels; an essential task when spreading such important universal messages.

‘mars’, is a much loved single from ‘weird!’, and continues to be one of the most emotionally charged songs from the album. In fact, it is songs, such as ‘mars’, that define ‘weird!’ as an album for the community. In my own eyes, much as the cover suggests, this album finds a way to touch all individuals from an array of different paths, all to unify them at the final destination- a destination of happiness, solace, freedom of expression, and hope for the future. In a raw way, Yungblud uses his voice to carve this anthem of acceptance into the minds of those listening; “All this therapy eats away gently at the side of her mind that she never had”. True to form, Yungblud continues to use his platform to incite change, and challenge the crippling obscenities still occurring to individuals around the world. ‘mars’ is yet another song that contributes to Yungblud’s mark upon the youth and his status as both a leader and role model, expressing how easily we can begin to call out the injustices many people face on a daily basis within mainstream media.

‘superdeadfriend’ follows, but branches upon a completely different path to its counterparts. This track is expressive and knows no bounds, allowing for not only a more electronically driven beat, but experimentation vocally with a robust rap-like sequence. This burst of non-stop energy is a standout piece of experimentation gone well, further proving that music, messages and morals hold no bounds, and the pillars of communication are limitless through sound. ‘superdeadfriend’ is both a catchy and eye-opening piece within this body of work.

Next is ‘love song’. This heart wrenching track is overwhelmed with emotion that not only spills, but drenches the listener. Every inch of meaning, feeling and emotion permeates through this track creating such an unmissable connection through the song we have been presented. It is through such strong connections that Yungblud has continuously spread messages, and connected with others to create a community of understanding and unity. ‘love song’ proves to be no different, with its sheer presence leaving such a strong and lingering mark after every listen. It is truly a masterpiece.

‘god save me, but don't drown me out’, the third single from the album, is a raw and emotive track that fortifies itself with feelings of struggle, hopelessness and pain, only to crumble the walls through prevailing senses of joy and hope. Through the span of this almost four minute track, we are able to see a story being told, spanning from dark points; “ my shoulders weigh more than I can take”, to moments where we see the persona take control back; “won't let my insecurities define who I am”. Through juxtaposing lyrics and themes, accompanied by the development of the persona in the track, we are able to view a story of hope, aspiration, and navigation toward a better future. It is tracks like these that aid us in these troubling times, allowing us to recognise the hope that could lie ahead. Through ‘god save me, but don’t drown me out’, Yungblud reminds us that the first step to a better future is initiated within finding ourselves.

After much anticipation, ‘ice cream man’ has finally weaselled its way into the world, and on the track list of ‘weird!'. Masked as a light-hearted and bubbly tune, ‘ice cream man’ is subtly a song of immense relatability, delving into the worlds of self-doubt, exclusion, and questioning of self-worth. ‘ice cream man’ is a non-intrusive exploration of our inner selves, and the capability we hold to destroy our own aspirations and goals through negative thought and individual action. The way in which this song so softly tackles such an immensely universal topic should be applauded, not only as it creates a song that is easy to listen to, but paints the task of evaluating our inner self much less confronting. The wait for ‘ice cream man’ was well worth it, and it has easily grasped onto its preceding reputation.

‘weird!’, or better yet, the title track, had some incredible shoes to fill. But, since its release and to this day, ‘weird!’ continues to be something I can only describe as a beautiful song. It is both sombre and upbeat, sad but hopeful. The softened vocals of Yungblud, intertwined with a simple beat that allows the lyrics to shine creates a feeling so magical that never fails to attend each listen. It is easy for such tracks to be donned as corona anthems that showcase the hardships of our year, but ‘weird!’ had, and continues to have so much more potential, presenting itself as a song of survival, understanding and perseverance. Upon what would be one of my listens within the triple figures, this song continues to fill me with joy, and is a sure standout from the album.

‘charity’ is next and from its first listen, it quickly became a personal favourite. This track is drowning in so many lovable features, from its talking/aside like verses, to its nostalgic essence within the instrumentals, there is something so comforting and personal about this song. Much like ‘strawberry lipstick’, ‘charity’ bursts from the roots of formerly laid punk foundations, which account for this track’s new yet familiar feel! Both upbeat and quirky, this song does something different and unique, which ultimately makes it such an inviting and exciting track.

‘acting like that’, the most recently released single, acquires the help of the converted pop-punk icon, Machine Gun Kelly. The chemistry and intertwinement of both MGK and Yungblud inserts such an energy into this track- a feeling which is aided by its unmistakably pop-punk beat. The simple chorus is an unforgettable feature… (and I mean unforgettable) that becomes an engraved reminder within one's brain of this incredible pop-punk anthem. We have seen these two acts take the stage together before, but ‘acting like that’ takes the pairs’ explosive and contagious energy to new heights. It was a pleasure to see both of them create something so true to themselves yet again.

The next track is ‘it’s quiet in beverly hills’. Toned down from the previous track, ‘beverly hills’ takes a more sombre approach, which places such a large emphasis upon its lyrical content- lyrics that account for just how beautiful this song truly is. In particular the line, “I'll love you all of my life, all of my life/Until you close your eyes for good” continued to resonate with me. These lyrics are located within the chorus, meaning they are repeated frequently. Such a passionate and promising line, repeated as though ensuring the promise is kept, assists in building up the loyalty and tone this song wishes to portray. Ultimately, this song has accumulated to something beautiful, built from piles of love, dedication, and sincerity, making this song all the more emotional. Cue the tissues for this one.

The final track from ‘weird!’ is ‘the freak show’. From its beginning to its end, this track is like an album in itself. Through every tone turn, tempo change, vocal manipulation and perfect confusion, ‘the freak show’ is not merely a song, but a multi-dimensional final exploration of the world of ‘weird!’. As a closing track, it is a show stopping piece of art that displays all that has been, and all you can immerse yourself into again (you just have to press play again)! Most importantly, ‘the freak show’ acts as a powerful reminder to the messages and morals of this album in itself, brilliantly alluded to in its final lines; “so welcome to the freak show I hope that you find yourself today”. Truly, ‘the freak show’ not only closes ‘weird!’ but encapsulates it as an album of self-exploration, discovery, and unity among all.

Through ‘weird!’, Yungblud has yet again created a scene, an environment, that fosters growth, individuality, freedom and expression. The tracks within become anthems to the changing nature of acceptance and commonality, whilst also promoting the beauty of uniqueness. With many musical twists and turns, as well as the exhibition of many vocal feats, Yungblud has created an album with substance- substance that is delivered through beautifully composed tracks. The emotion, energy and passion upon this album is second to none, which not only engage, but elaborate upon the unifying nature of this soundtrack for the future. ‘weird!’ is an unmissable album.

Check out the album below and let us know your thoughts!