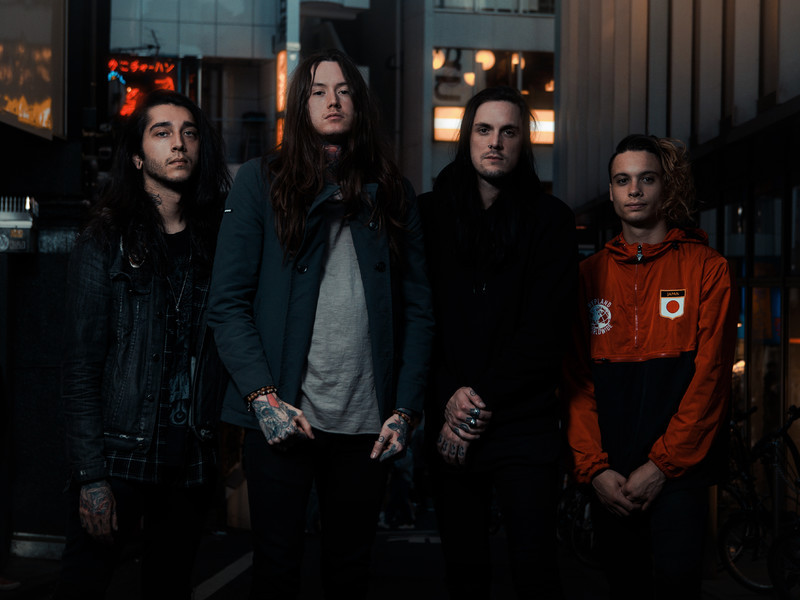 By now, it goes without saying that I'm a sucker for albums and songs that explore the darkest corners of our minds. Through their latest album, Bad Omens, a metalcore band formed in Virginia back in 2015 with Noah Sebastian, Nicholas Ryan, Joakim Karlsson and Nick Folio as its members, does exactly that.

After three years from their first record “Bad Omens”, they’ve returned with "Finding God Before God Finds Me", a complex ten-song’ track album that keeps up with their tradition of discussing important matters through their music. In this case, they discuss one fear that most of us have had at some point in our lives: how trusting is scary, the courage that it's implied in doing so and how it feels to trust blindly and be hurt as a result. As a listener, I was charmed by how candidly they spoke of this and found myself hearing intently at every word.

Out of an album, the intro songs are never my favourite but "Kingdom of Cards" might have become the exception to the rule. This introduction discusses one of our worst fears, which is stepping outside our comfort zone for others, only to find ourselves hurt. With a catchy beat and lyrics that spoke right to my soul, I found myself bobbing my head to the rhythm and yearning to learn its lyrics as soon as I could. “Kingdom Of Cars” is an introduction that sets the theme for this whole album in a way that exceeded my expectations.

Something that I really like is how every issue discussed is done with a dose of strength. "Careful What You Wish For" - this album's third track - is focused on a most important topic: suicide. This track might not be meant for the weak of heart but what’s interesting is that though there is an accurate note of despair in the voices and the rhythm speaks of chaos, the lyrics are strangely courageous and understanding, "If you need a place to hang your head, a shoulder's better than a knot" being one graphic example of this.

Another two tracks worth mentioning are “Mercy” and "Said & Done", the seventh and eighth songs in this record. Now, by the time "Mercy" starts, we've listened to six fast, loud songs filled with screamo. As fitting as I personally believe these aspects are for the album and the theme, it might feel slightly overwhelming for a listener perhaps used to another sort of music. With "Mercy" and especially with "Said and Done", a calmer, lower sort of sound is offered. The screamo is still there, but in a much-dissolved manner, and their lyrics complement what are two amazing songs.

The last two songs "Burning Out" and "If I'm there" also implicate a change of sound from the first part of the album, but the reason they stand out for is the amplified emotion they possess. With lyrics like "That we're not perfect, but we're proud of who we are" and "And if you're there to catch me when I fall / Then maybe Hell ain't so bad after all", they speak of a progress made since the start of this album and, while they leave the listener with a feeling that struggle is not yet over, they perform the closure to "Finding God Before God Finds Me" perfectly.

If the first part of the album was perhaps slightly redundant in its sound, the second part more than makes up for it. “Finding God Before God Finds Me” is an utterly entertaining and oddly moving album with a powerful message and a solid unity between all its tracks. With this easily being one of the albums I’ve enjoyed hearing the most so far in 2019, I believe “Bad Omens is one band to look out for.