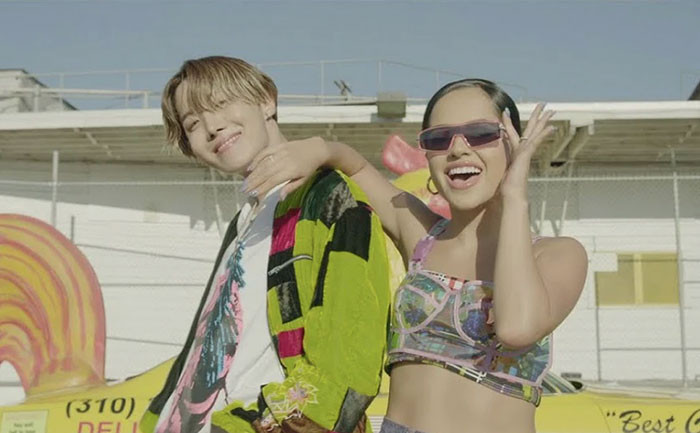 The Becky G and J-Hope collaboration has finally dropped and it's epic.

For some time, artist Becky G, had been enticing fans with the possibility of something happening with BTS. The teasing kept fans eagerly awaiting more signs of a future project. Not long after, Becky G posted videos of herself at a music video set with plenty of Korean snacks. Everyone immediately began theorizing.

Later, Jung Hoseok (aka J-Hope of BTS) also created hype around the topic. Replying to a fan's comment on their platform 'Weverse' saying, "Hang in there! Everybody will be suprised." Overwhelming excitement brewed among the fandom causing everyone to guess a release date. Soon, there was speculation about how long the collaboration had been in the works. A behind the scenes video called "Bangtan Bomb," from BTS' YouTube channel "BangtanTV" showed J-Hope introducing Becky G to the other members at the 2019 Billboard Music Awards.

Finally, both artists replied to each other via Twitter saying they have a "secret." News about the collaboration spread widely across social media and everyone was ready for the hip hop track, "Chicken Noodle Soup." The song is inspired from Webstar and Young B's "Chicken Noodle Soup." It influenced J-Hope's start as a young dancer and both J-Hope and Becky G stated it as a favorite childhood song of theirs.

Both song and dance pay homage to its predecessor. It's also extremely diverse with lyrics in Korean and Spanish plus back up dancers from various regions. The lyrics express their confidence as artists while the remarkable choreography proves it.

Becky G and J-Hope are the perfect duo who complement each other in vocals and performance. It's a hip hop video bursting with color, personality, and extreme dance moves. They certainly made a great "Chicken Noodle Soup."

Check out the track below and let us know what you think!