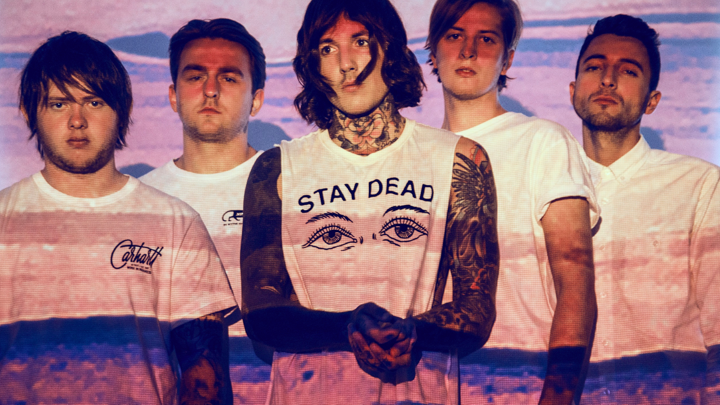 Back in 2015, no one would have expected to see Bring me the Horizon’s name lighting up the signs outside the O2 arena. For many people they are still an unknown band. “who’s bring me the horizon?” one girl asks her friend. But the many fans, old and new, know how much of a Big achievement this is for the Sheffield band, with some even queuing outside the day before.

Back in 2015, Bring Me The Horizon seemed to be at an all time high in their career, adopting a soften sound from their original metalcore roots, providing them with a bestselling album, reaching a gold status within the UK. Performing at Reading before Metallica left proof the band were more than capable of headlining the festival stage one day. With a UK tour seeing the band play venues such as Alexandra Palace, it seemed like the days of playing small venues were over.
2015 album ‘Thats the Spirit’ showed Oli Sykes' personal struggle, especially with drug addiction. What seemed most surprising was a band who once were viewed as a band not to be messed with managed to convert their image entirely.
If the packed out o2 arena on the first date of the tour is anything to go by, the band is not close to slowing down, and neither are the fans who comply with oli’s commands for mosh pits and a wall of death, even in one statement shouting “pull your tampon out!” making the crowd even more vicious. As well as playing newer songs, which arguably were the reason they were able to play such a venue, they also recognised old fans with songs from the previous 3 albums, which proved the band still could live up to their metalcore title, even though it seems as though the band don’t care much for genre placing.

The unsung hero of the band, Jordan Fish, held Oli’s vocals together by projecting his own screams when it seemed like the singer needed a break during the encore, with previous damage to vocal cords making it hard.
Songs such as ‘Can You Feel My Heart’ ‘Crucify Me’ and ‘Drown’ were easily crowd pleasers, with fans getting down onto the floor before jumping up into a wave of madness, further showing Bring me the Horizon as having an extensive amount of rock anthem’s. The heavy guitar riffs easily carried each song, while Oli was able to project his voice so that even people standing at the back of the O2 arena could hear the frontman’s exceptional vocals and easily the best screams heard from Oli within the past year.

The visuals of the O2 show deserve special recognition especially, with key words of songs such as ‘Happy Song’ bouncing onto the screens backed by a set of colour and patterns. With images related to songs also being showed while the songs went on, it proved that this show was not just a simple gig but a performance, a million miles away from what a Bring Me the Horizon show would have been a few years before.

The punchy drum beats at the beginning of each song were enough to get the crowd ready for every single song and screams only got louder as Oli bounced from one end of the stage to the other. The gig showed energy, integrity and visuals and these things put together easily came to create one of the best live performances of 2016. As the crowds of drop- dead wearing fans left the O2 and embarked onto the tube station, everyone was certain of one thing: Bring Me The Horizon still seem dead set on world domination.