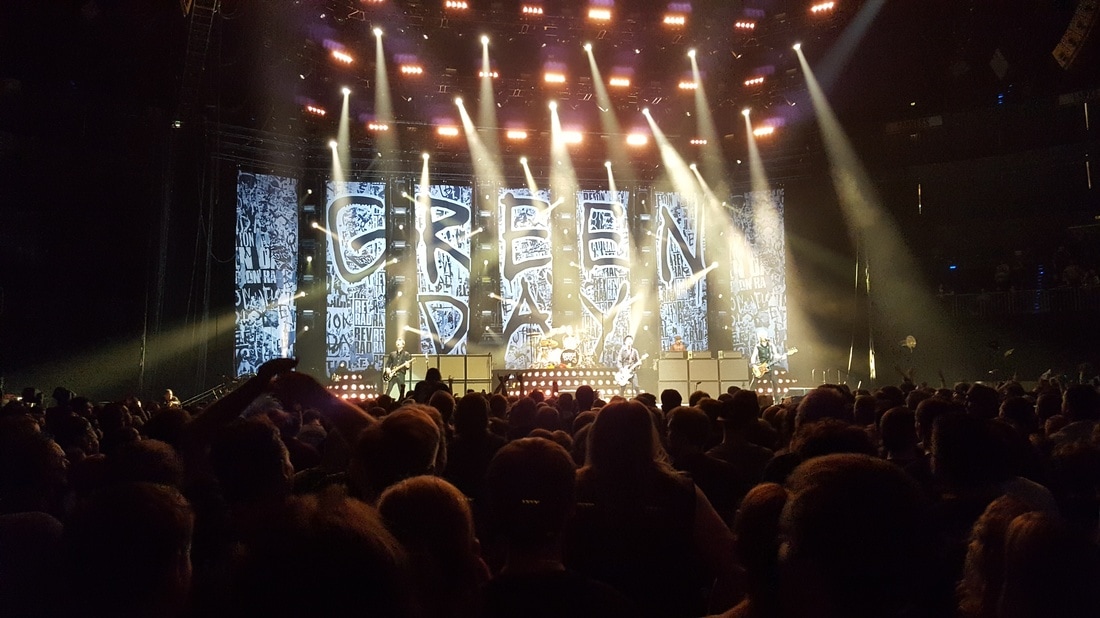 Are you ready for the revolution? Green Day are currently touring through Europe with their Revolution Radio Tour in support of their latest album and damn, boy, what a riot it is! In Cologne, the punk rockers played a 2,5 hours set with songs from all of their albums (except for Uno, Dos, Tré) in front of 18,000 people - from the 1992 track "2000 Light Years Away" to the newest single "Still Breathing".

Opening the show with "Know The Enemy", "Bang Bang", "Revolution Radio" and "Holiday", the crowd quickly became one head banging, moshing human soup. Needless to say that the trio, who are especially known for their anti-Bush song "American Idiot" made sure to share a political message during the show. With chants of "No Trump, no KKK, no fascist USA" during "Bang Bang" or by repeatedly reminding the audience that it is our social responsibility to help those in need, Billie, Mike and Tré made a clear point: Green Day will stay relevant. No matter how old they are, how long they've been in the music business, how successful they are or if they are denounced as "mainstream punk" by critics, Green Day know where they come from and they damn well know their place in music history.

Still, the band is astonishingly approachable. Three times during the show, fans were allowed on stage to perform with them. My personal highlight was the boy Diego who was brought on stage to play the guitar to "Knowledge", rocked the arena and was gifted with Billie's guitar after the song. To say that he was completely blown away by what had just happened is an understatement. Billie Joe Armstrong partied on stage like there's no tomorrow: he put on accessories thrown at him from the crowd like a huge German flag or a funny handband, shot shirts into the crowd and drenched the front row in water with a hosepipe. It was so much fun to watch him enjoy doing his "job" up on stage. "King For A Day" was the climax of all hilariousness with him wearing a police hat and a crown during the performance. But Green Day still managed to make some space in their set for the quiet moments. During "Boulevard of Broken Dreams", "Are We The Waiting" and the two acoustic tracks "Ordinary World" and "Good Riddance", the whole arena was lit up by smartphone flashlights. It was truly a sight to behold.

All in all the show was definitely one of the best I've been to. There were just so many little things that added to the whole experience: the likable personality of the band members, the diverse setlist, the great audience which rocked out without being egotistical dicks and, of course, the amazing form of the whole band. Still, there were a few things that would've made everything even better. While the setlist was so diverse that old and new fans alike were happy in the end, I would have enjoyed some more tracks from their new record - I mean, it is called the "Revolution Radio Tour", right? I really missed songs like "Somewhere Now", "Troubled Times" and how awesome would've been "Say Goodbye" or "Bouncing Off The Walls" live? And why did they ignore their material from the trilogy? "Stop when the red lights flash", "Oh Love" or "Nuclear Family" are killer tracks especially when performed live. I guess it's pretty hard, next to impossible, to play the perfect Green Day setlist. They just have too many good songs!
​I also wasn't really a big fan of their pyro, cause some of it was so damn loud that I almost got a heart attack when they shot their load (pun intended). A little too much "bang, bang" for my liking, if you know what I mean...

My personal highlights: The epic performances of "Forever Now" and "Jesus of Suburbia" and an absolutely beautiful confetti rain during "Good Riddance". Honestly, nothing can beat the surge of happiness when you witness the performance of such a beautiful song while confetti rains down on you!
My personal low points: A couple making a lame "I stand in front of the stage"-selfie about 10 seconds after Billy made a point about experiencing the show instead of making selfies. It was also pretty scary when a  young girl went into some  dehydrated state of shock right in front of me. Really, kids, don't forget to drink during shows!  Written by Melissa Wilke