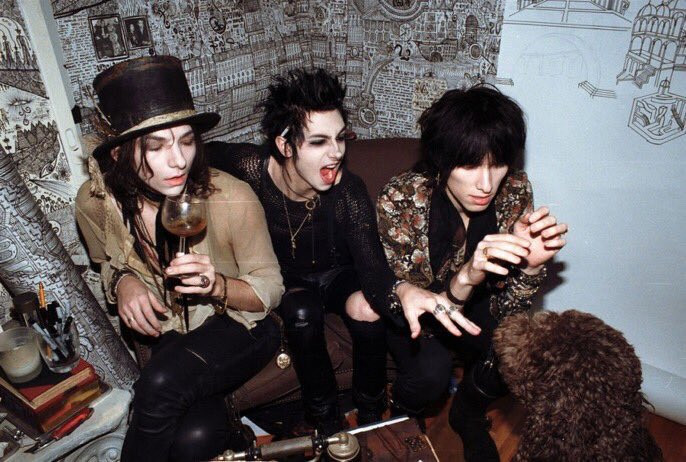 Generally, Friday the 13th is a day most individuals fear; locking themselves away and removing themselves from any excessive activity, in order to escape the impending doom in which this superstitious day brings. However, on this fateful Friday, hundreds of Sydney’s most devoted ‘Soldiers of the Royal Council’ looked fear in the face, and prepared for Palaye Royale’s first Sydney headliner!

The line of Soldiers drifted throughout the streets of Leichhardt, each twist and turn met with appropriate striped garments and old timey trench coats- an ode to the band’s ‘glam rock’ roots. The sea of people was initialised at the doors of the Crowbar, one of Sydney’s most iconic venues. It’s small and intimate nature was soon to be our home for the next few hours.

Upon dark, the lines crawled into the dimly lit venue, and the time for Palaye was upon us. After what seemed like hours of teasing by pausing the music then continuing to play it, and adjusting the lighting, the time finally came when the velvet drapes peeled open and the band emerged.

Opening with the iconic, ‘I Wanna Be Your Dog’ by The Stooges, Palaye ensured that the night ahead was going to be heavy, hot and hectic! Upon the end of this first song, the band introduced themselves, only to be met with a loud roar. The close and intimate nature that the Crowbar provided not only made for an almighty mosh pit, but made artist to audience conversations personal and touching.

Shortly after, the night became a non-stop whirlwind of some of Palaye Royale’s biggest hits, including the likes of ‘You’ll Be Fine’, ‘Teenage Heartbreak Queen’ and ‘Mr. Doctor Man’. Through songs such as these, as well as some only known by more avid listeners, it was clear to see the trust between the band and the audience. Not only was this seen through multiple times we were asked to recite lines, but through the numerous occasions both Remington and Sebastian glided across the crowd, with only the strength of their loyal fan-base to hold them up. This truly emphasised the intimate nature of this establishment.

Just when the mosh could not have gotten any sweatier, or any more congested, Palaye pulled out one of their biggest party tricks in the form of crowd favourite, ‘Get Higher’. As per Remington’s instructions, the almost sold out venue crouched upon the floor. As the song built up, so too did the crowd rise, subsequently leading to an insane outburst of energy at the climax of the song. Such an interactive activity conducted by the band was not just a fun game, but something that built trust between surrounding individuals, and connected the energy of everyone within the room, making it a truly special moment of the night.

After a multitude of insane songs, headbanging, dancing, crowd interaction and typical Australian tormenting, Palaye ‘left’ the stage as the end of the show had apparently dawned upon us. In typical concert spirit, a roar of “one more song” brought the band back from the concealed backstage areas to perform their legitimate, final song. The show drew to a close with ‘How Do You Do?’, with every ounce of passion, sweat and talent left on the stage. It was truly an incredible end to the night.

After being on the road for almost four years, one would assume the band would wear out, perform with a lack of energy, and become tired of crowd interactions. However, Palaye Royale proved to myself, and their audience, that nothing they do is half-hearted, and everything gets left on the stage of the night’s show. For this reason, Palaye have gained my full admiration, and I’m sure they have left a mark on many others.

Just as I thought the night could not get any better, my expectations were once again thrown away and mocked, for the night was truly getting more incredible. Despite a sea of people within the venue, the members of the band crawled out of the darkness to greet everyone. I was lucky enough to meet, and take photos with both Emerson and Remington, and I can safely say that my respect for them as not only musicians, but people, has grown immensely. Emerson in particular took the time to greet, hug and discuss ideas with everyone; something that was truly special to me. Remington was very much the same, making everyone feel welcome in the safe environment they had created that night. I believe Sebastian was also out greeting people, but I missed him in the whirlwind of excitement!

After many photos, a few freak-outs, and some amazing one on one time with the members, the Palaye Royale Sydney headliner was over; and so too was a night that I will not forget!

I can not put into words how special this band makes you feel, how kind they are to fans, and the many steps they take to create a family-like environment within a mass of people that have only so much as glanced at one another. The show was like nothing I had been to before, and the excitement of the night was only sparked by the fuel of emotion and passion provided by Palaye. Palaye Royale certainly left their mark on Sydney at their first headliner show, and I can not wait for them to come back! We recommend catching them on their upcoming 2020 tour, and live through the same incredible experience as us!