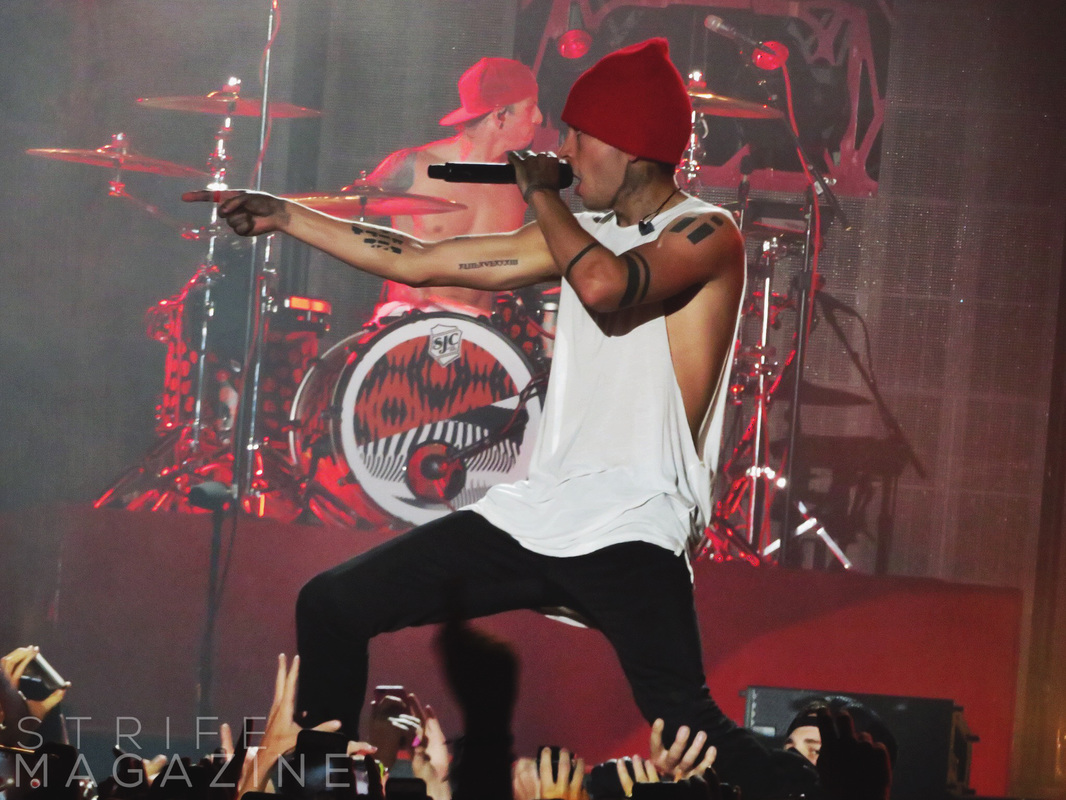 As a Twenty One Pilots obsessed girl, getting to see them live was a huge milestone for me. I had been counting down for ages and this finally got to happen last night, when I saw them at Alexandra Palace in London, UK!

A long wait out in the cold didn't dampen our spirits at all! Bry was up first and was everything I had expected he would be; charming, sweet, fun, with a sprinkling of self-deprecating wit. He played awesomely, even in the face of a broken guitar string, and got the crowd jumping along with him. It is easy to love Bry and he was sweet enough to offer to sign copies of his brand new album after the show.

Bry & Candice's video shows some Alexandra Palace footage:
Alexandra Palace (or Ally Pally to the locals) is gorgeous and is deceptively huge, with standing capacity of 10,250. Twenty One Pilots hosted sold out shows. Twice. That’s a lot of clique members. It is one very large general area and the stage, with two screens at the side for image projection.

A curtain dropped down after Bry was finished, covering the stage while the crew set up for TØP. We know that the boys don’t do anything randomly. They treated our ears to Sigur Rós during this time, as well as teasing us with low tones that every TØP fan would recognise as their sound. When the low notes changed, it incited screams from the crowd, as well as chants for the band to come out.

Thankfully they were (refreshingly) punctual. Blue light from behind projected two very familiar silhouettes: Josh Dun and Tyler Joseph. (Wait, should I say Tyler’s name first because he’s the lead singer..?) Lasers and flashing lights with the bass from Fairly Local set our hearts racing with excitement and cue even more screams. This is really haaaappeninggg!

The curtain dropped and there we had our boys and we were into 'Heavydirtysoul'. It was exciting to see all these little signature TØP things in the flesh: The throwing of the tambourine, the red light microphone, Josh’s arms flying over the drums, Tyler’s dramatic backwards fall. So surreal!

Next we had Tyler at the piano to start 'Migraine'. “Am I the only one I know...” No you’re not, Tyler, no you’re not! We all sang along loudly and bouncing and moving just had to happen along with it.

The show was so fast paced, going from song to song and merging one song to another. I feel like this was with the intention of giving us all something that we’d love, and I’m sure that works very well.

Before 'Polarize', we got to see Josh Dun and his anxiety in a clip (“Don’t go.. Don’t go back on stage”). No one likes seeing Josh in this (fictional, but also not so fictional – anxiety is very much real) situation, and we’re all grateful to see him back on stage. So we scream, of course. 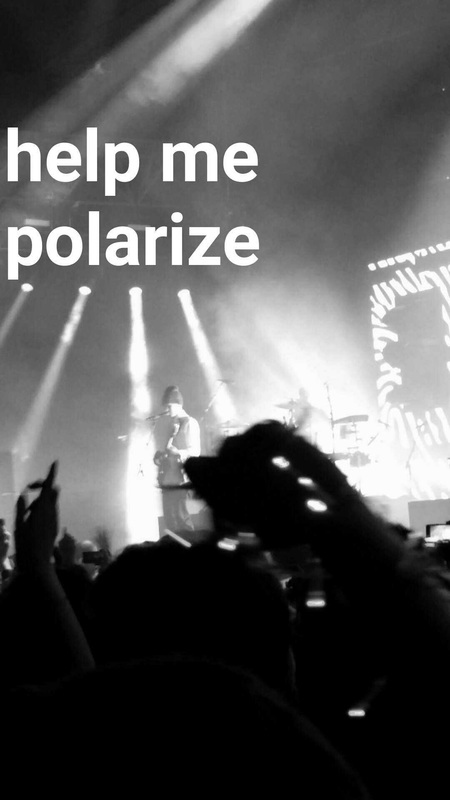 Tyler had the bass slung across his hips for Polarize, and also the next song (Heathens) and I think this may be for the cool factor, before the ukulele comes out. (Don’t worry Tyler, ukulele is totally cool.)

Rock cool is red beanie and white long sleeved shirt and serious looks. Ukulele chic is floral kimono and white glasses and grins. It was exciting to see him transition into more enjoyment as the show went on. Though I guess each song has a 'character' to express.

We were lucky enough to see Tyler play a part of 'Can’t Help Falling in Love', before launching into kind of a ukulele medley with 'House Of Gold' intro, 'We Don’t Believe What’s On TV' and 'The Judge'. WDBWOTV was super fun with all of us screaming “YEAH YEAH YEAH!”.

'The Judge' gave us an opportunity to shout “JOSH DUN!” along with Tyler, and featured a glowing-eyed Josh in space on the video screens. The video that was overlayed with the show's live footage was done really well and complimented what they were trying to share with the song.

So 'Lane Boy'. As a TØP obsessive, of course I’ve crouched down and ‘stayed low’ in my bedroom/kitchen/living room/every room before leaping up and going bananas. But never have I done so with ten thousand, two hundred and forty-nine other people. Wowww. Oh, and our favourite hazmat suited characters of Fame and Success joined the guys on stage which was really cool.

The boys disappeared for a moment before appearing on a smaller stage in the middle of the audience area, for a medley of their older songs, complete with skeleton hoodies. My favourite TØP song is Ode to Sleep and I was so excited to hear it start up!

Because I was up toward the front, I relied a lot on the video screens to see what was going on. There was a lot of close up shots of the guys, in particular Tyler’s face. I could see that in some moments that Tyler got lost, whether that was swept away by the music itself or just lost deep in thought, I’m not sure. They played parts of: 'The Pantaloon', 'Fall Away', 'Johnny Boy', 'Forest', 'Addict With A Pen', 'March To The Sea' and 'Kitchen Sink'. It was very moving for me to see these played. They have an emotional element that is not necessarily present in other songs. 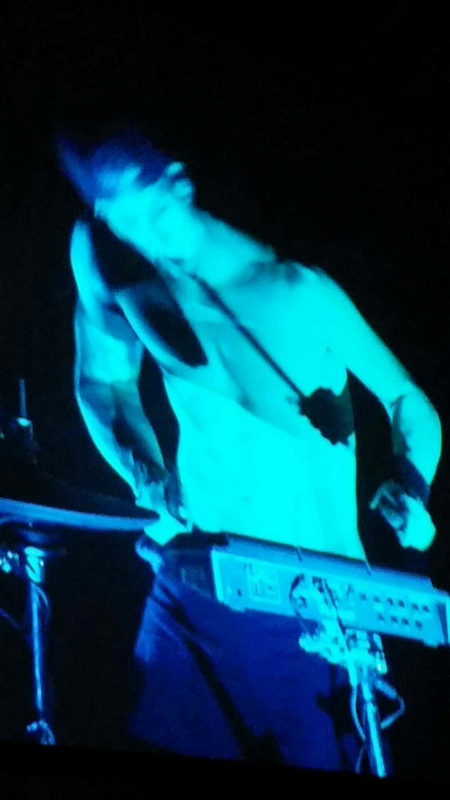 Back on stage, Tyler joined the audience for 'Holding On To You'. When the guys were both standing on the piano together (before “lean with it, rock with it”) they did their ‘secret’ handshake as well before Josh did a backflip off the piano. Tyler felt more and more present as time went on and talked more with the crowd. There were moments where he’d just be looking out at us and taking it all in. It is something special to see someone you admire, admiring you back. Josh was relentlessly going for it and ever present and I can see how grounding he is for Tyler, in more ways than one. They make a good team.

All of these things seemed to happen really quickly. It was all very fluid from one thing to another. The bass was back for 'Jump Around' (House of Pain cover) and then Ride. I think the clique all know what’s coming, but it’s still really exciting. And one of those things is seeing Josh playing drums while held up by us. It is heart warming too to see Josh take in all of this love and attention coming right at him. 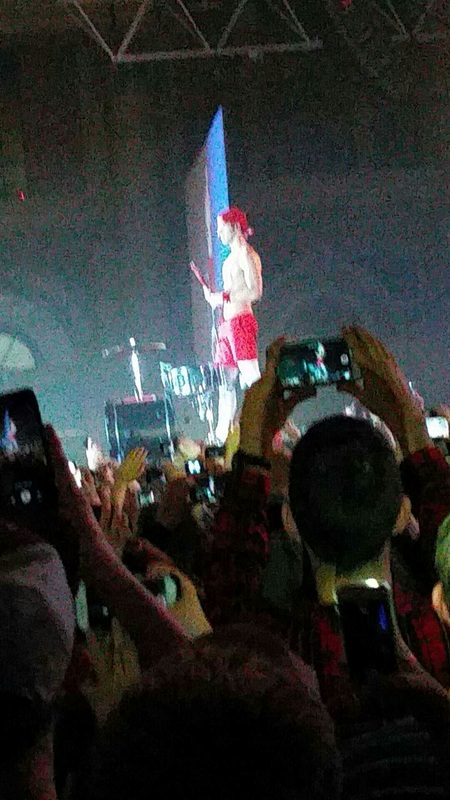 'Stressed Out' mashed up the Mellowmatics remix (featuring Mutemath’s Paul Meany’s daughter, Amelia on vocals :)) and the guys playing. Of course vocals featured all of us 10,250 too. We will always sing along! The video playing behind showed the Stressed Out music playing inside a suburban house and it was a nice touch.

'Guns For Hands' had us all going nuts and Tyler went nuts too in the hamster ball. That was something really cool to see live as well. It was one of those ‘pinch me’ moments. Is this really happening?

They played 'Tear in My Heart' next, and despite it not being one of my most favourite songs, it was such a great song to bounce along with the crowd to and a lot of fun.

'Car Radio' was more bouncing, especially when Tyler played a disappearing act and appeared on top of a podium down the other end of the hall. He also had another really good look at all of us and was glowing with gratitude. Everybody SCREAM!

'Goner' was beautiful to see live, with the bird animation running behind them as well as the emotion of the song. Very moving experience with all of us singing along too.

There was a bit of a ‘We did it’ vibe when Tyler acknowledged that they first came to London performing in smaller spaces, and now they had sold out Alexandra Palace, twice.

They closed with 'Trees', yet another moving experience and yes I cried. When the boys came into the audience to drum (“HEY!”), it was surreal to watch the red confetti paper drift down and see Tyler Joseph and Josh Dun right there banging their drums. It was sad to be ending, but I could agree with what Tyler was saying, that they had given their all. They worked hard to give us each something that we’d enjoy and I left Ally Pally feeling full, inspired and happy. 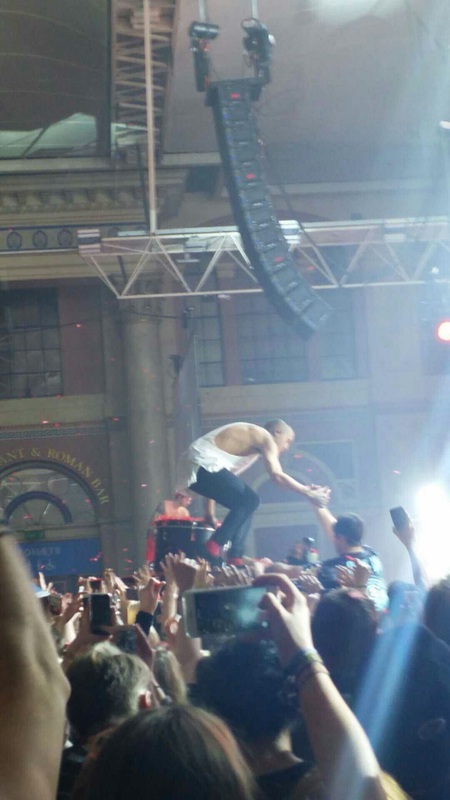 What might their show look like and sound like with new music? I can’t wait to find out, whenever that might be. I'll be seeing them again very soon in Melbourne and can’t wait to again be entertained by two (very hard working and energetic) happy boys!

All of us 10,250 shuffled out to the sounds of Celine Dion's "My Heart Will Go On" and The Beatles' "All You Need Is Love". Thanks for all of the love, Tyler and Josh. We love you too. Review and (dodgy) photos by Kel Burch