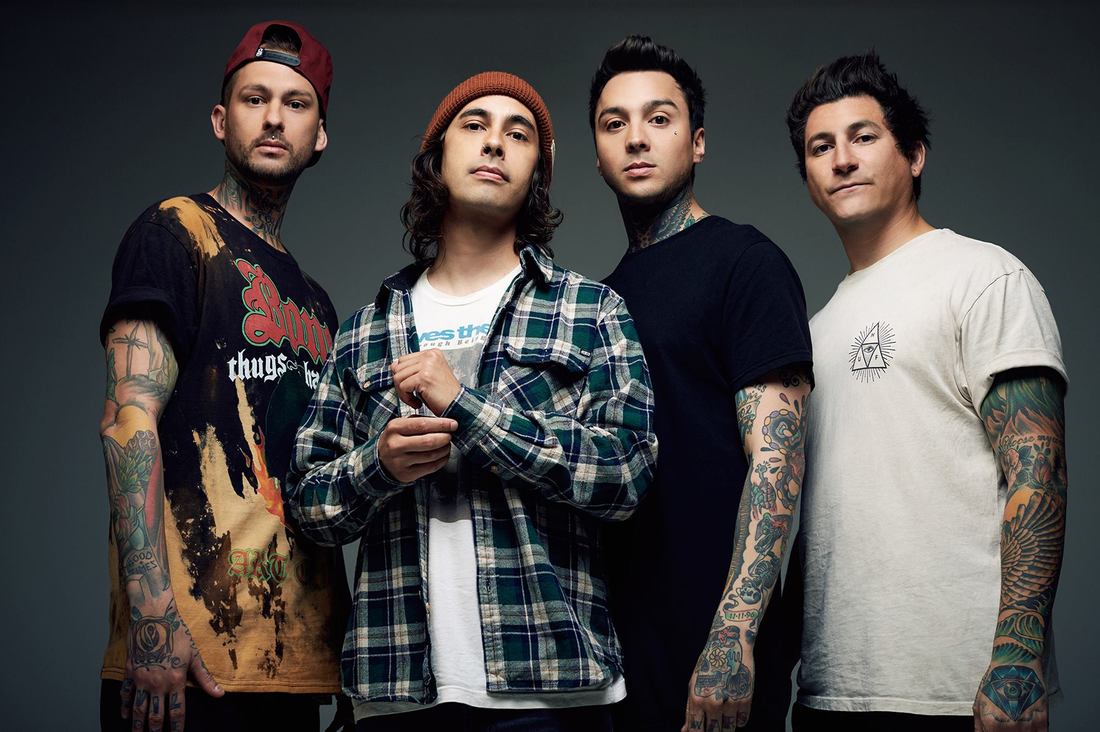 Stumbling back to the main stage, still somewhat windswept after the hurricane that was As It Is, we took up our places under huge expanse of sky that was now fragmented with the odd shaft of hot, bright sunlight, ready to get back to our roots as teenage emo fangirls and let loose for Pierce the Veil. The iconic San Diego post hardcore quartet may all be in their 30s now, but their reputation as a gateway band for many young alternative music fans into the world of post hardcore and metal is as alive and kicking as ever!

After a dramatic build up from drummer Mike Fuentes, the rest of the band- made up of vocalist and guitarist Vic Fuentes, bassist Jaime Preciado and guitarist Tony Perry- bounded onto the stage to raucous applause and dove headfirst into ‘Texas in Forever’, packed to the brim with growling basslines, thrashing guitars and Vic’s satin smooth vocals gliding along in amongst them. In fact, their set packed in a whole host of new material, taken from their critically acclaimed 2016 album ‘Misadventures’: from the undulating guitars and sultry but sinister verses that break into screaming choruses on ‘Dive In’ to the lively summer anthem full of the thrill of adventure that Vic proudly informed the crowd ‘is about best friends’ that is ‘Circles’! There was still room for a trip down memory lane though, of course. The opening to ‘A Match into Water’ was masked beneath the vibrations of Jaime’s bass, which if truth be told were so overpowering to the point that it became a little abrasive, and so it was only when the first line of Vic’s vocals managed to push their way through the tumult that I realised which track they were playing, and in spite of myself, I felt tears prick my eyes as the words washed over me, breaking like waves, the pain and fear and desperation for hope that fuelled them cascading down on the somewhat solemn crowd.

Not that the audience around me remained stagnant for long, as with a surge of daring (and some coaxing from another young woman in the crowd), my friends and I cleared a space in the crowd and started our own little circle pit of four, the fire in the pit of our stomachs fuelled by the pounding guitars and growling bass of ‘Bulls in the Bronx’, with its mariachi-inspired bridge that gave way to a madcap impromptu dance party in the middle of the open ground! It wasn’t long before our makeshift mosh pit was spotted by Jaime, and with a quick glance at the rest of the band, he called out to the crowd, building on what we’d started until both mosh pits on either side of the stage were spinning like the most emo teacup ride I’ve ever had the sickeningly wonderful pleasure of being caught up in! All the hits were there too of course, as one would expect from a festival set, including ‘Caraphernalia’, with its infamous refrain that is branded onto the minds of every emo kid, past and present, ‘What’s so good about picking up the pieces?’ a line that some members of the crowd took particular delight at screaming up at the stage! And of course, what else could the San Diego powerhouses close with other than their landmark hit that signalled the beginning of their explosive upward trajectory towards the esteemed  cluster of stars to which they belong today: ‘King for a Day’,  its rebellious lyrics, soaring high notes and punishing breakdown all present and correct!

In spite of a somewhat lethargic start to the set thanks to a couple of sound errors with the feedback from the bass and a less than enthusiastic reception from some stagnant parts of the crowd, Pierce the Veil showed that they have the pedigree and the devotion of their loyal core of fans to overcome all of that and still deliver a cracking set. Perhaps it wasn’t their best overall live performance, but the songs remain as impactful and as powerful as ever, and with the right crowd and the right setting, that setlist could prove to be heart-stoppingly special. Regardless, a great time was had by all, and once the pits started pumping, the old Pierce the Veil magic resurfaced once more, and it is my belief that this is a band who will have made a very favourable impression on many more young music fans on that day, and that they could be the gateway into a whole wonderful world of music for so many more young people for many more years to come yet. Age is just a number after all, and if Pierce the Veil continue to show the kind of grit that they demonstrated at this year’s Download, and continue to write more kick-ass songs, it definitely won’t be the last time they grace that Main Stage- you can be sure of that much.