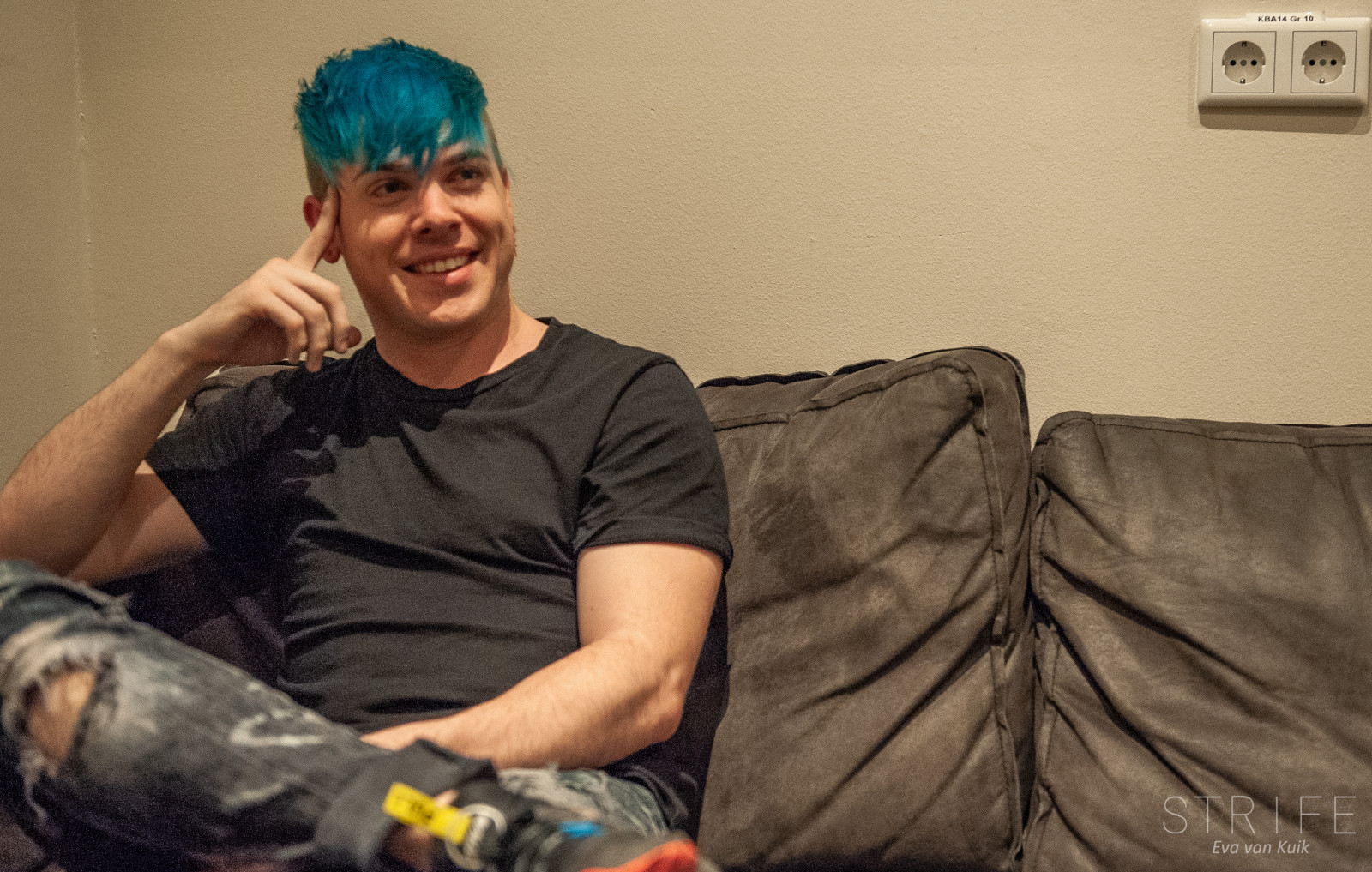 Set It Off are on the fast track to stardom with their latest album 'Midnight'. The album has sparked worldwide success and even landed them their first magazine cover for Rock Sound. We discussed all this and more when we sat down with Cody Carson on their most recent trek through Europe. Enjoy the read and don't forget to stream the band's new album!

Q: How are you guys?
A: We’re doing really well. It’s the first time we can ever say that the whole tour has sold out before it started. It’s a really incredible feeling ,knowing that you can relax and not worry about how many kids are showing up today. We just go and we have a great time every day. We’re having an amazing time overall on this tour

Q: Is there a big difference between the UK and Mainland Europe?
A: Not really to be honest. Not that we have noticed. Just A small language barrier but that’s easy to overcome. I try to learn the basics of every language like “Hello”, “Bye”, “Excuse Me” and that stuff. Also the same size crowd so far. Hopefully we can upgrade next time!

Q: Speaking of your incredible fans. What has been something that happened (with or because of fans) that really stuck with you?
A: Intensely is when there is a moment when we sing a newer and thus more unfamiliar song and I hold the mic to the crowd and all these people, whose main language probably is not even the language we speak, and they sing every word of it. That blows my mind every time and it has happened at least once every show so far. Also seeing people here get tattoos of our band or our music, it is insane. 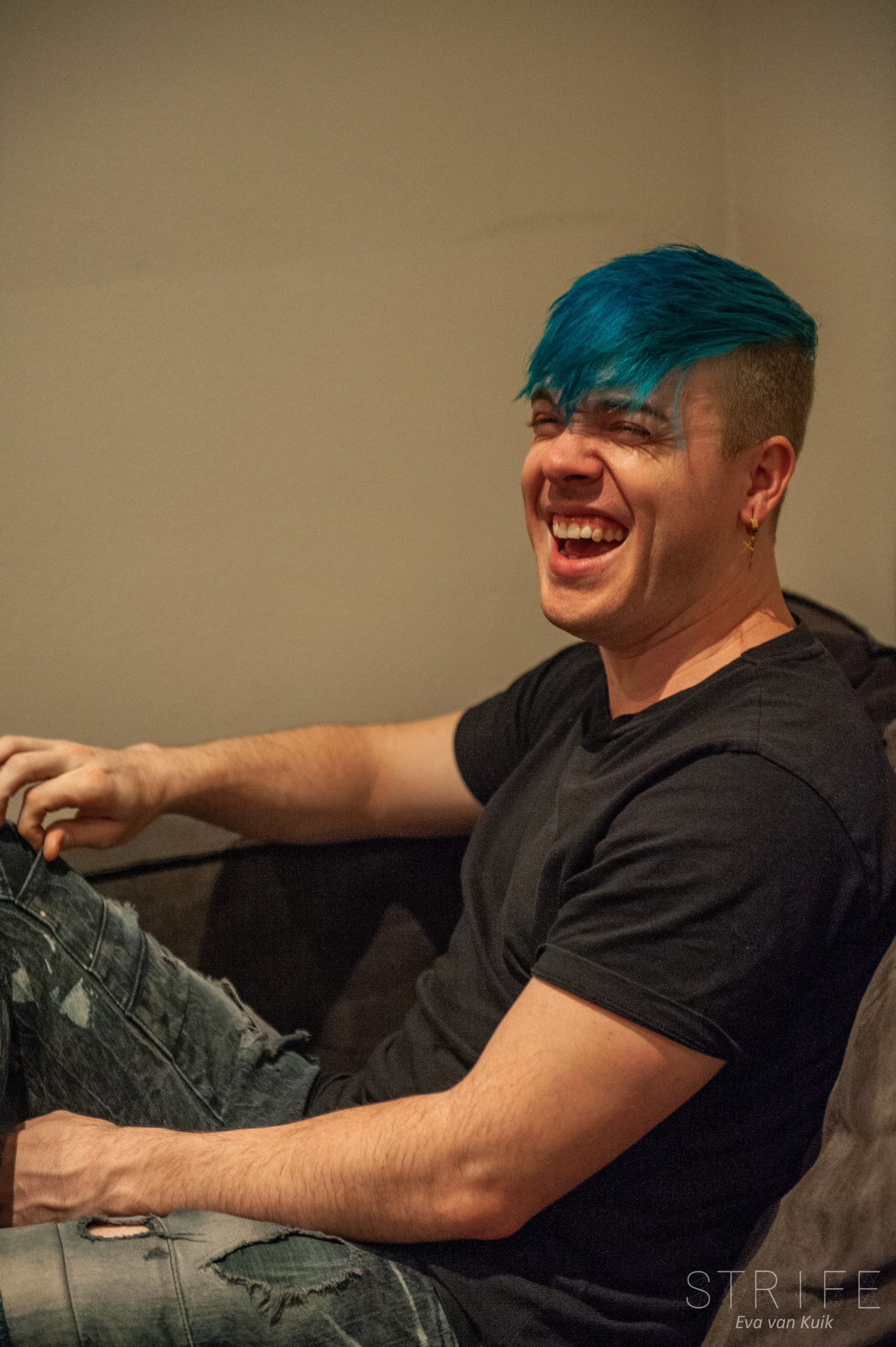 Q: For this record, congratulations on signing with Fearless Records. Can you tell us something about the story how you got signed?
A: It is actually kind of crazy. We were talking to a few labels. We had a phone call with Fearless and they were just really honest about everything and we felt like nothing was being hidden or any red flags would come up. It was a really nice conversation and aligning our ideas about what we wanted for the band in the future. We realized that this was going to be the right home and their office is driving distance from where we live.

Q: We’ve stalked your Twitter and you revealed that you already have so many voice memos for more songs and a next record. Can you tell us something about this?
A: In Belgium we were talking about how we can not wait to go to the studio again and I started thinking about how we never stopped writing even while on tour and we did not even notice it. Every other day we create something and we realized we can already start getting more songs out there.

Q: Some artists take very long with an era/album cycle. Your era is so successful right now, do you want to stretch this out or start a new one very soon?
A: I don’t think we are gonna rush into a new album, it’s going really well and we want everyone to be able to digest this record. But we do want to be prepared, we don’t want there to be another break like the one between “Upside Down” and “Midnight”. 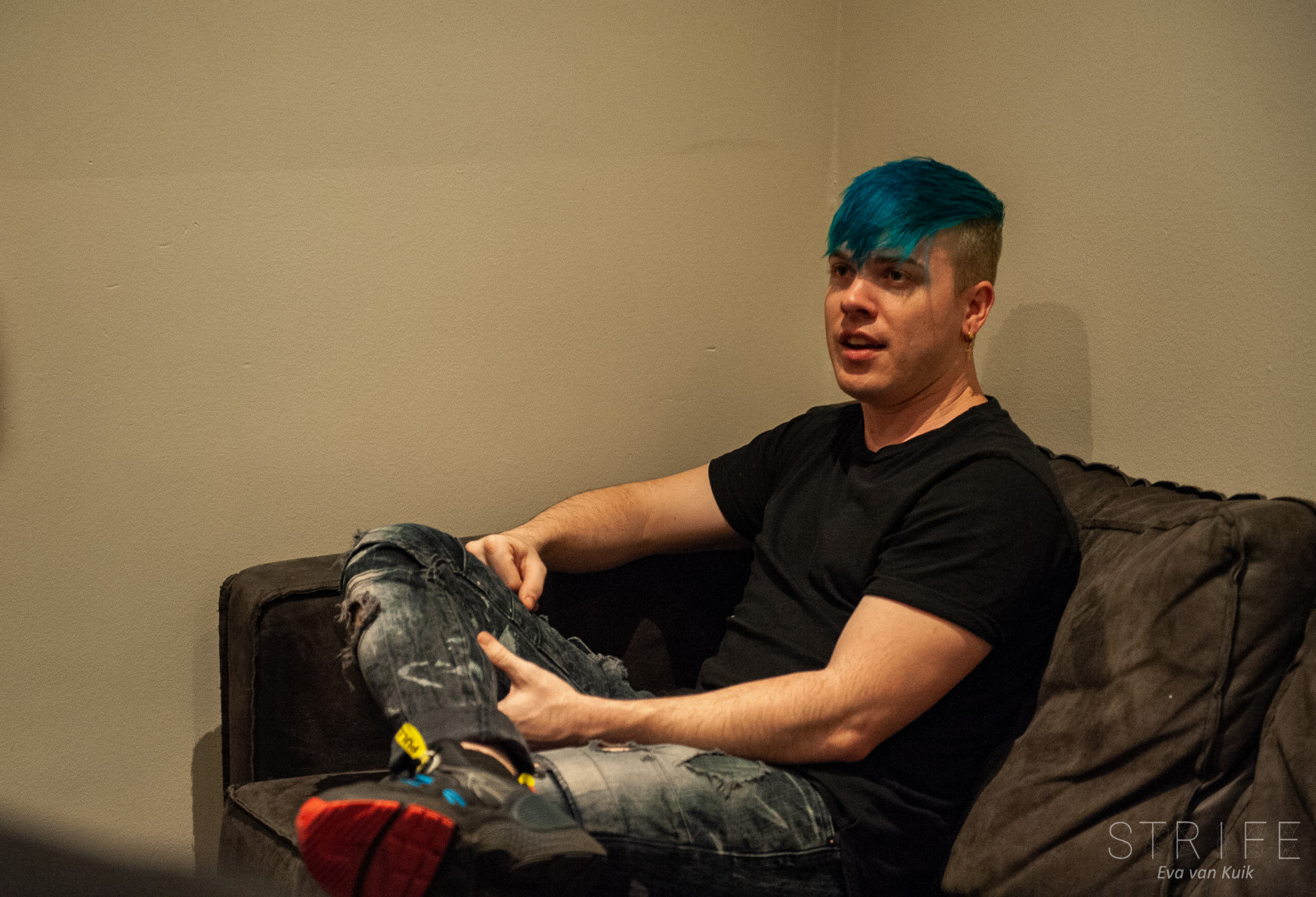 Q: Do you feel like you write more at home or on the road?
A: We always say we are going to write on the road, but we almost never end up actually writing. I make voice memos, but I don’t actually sit down and write. I like to write at home, in my apartment or in studios. We’ll write stuff together, but also on our own. Once we start writing we want to go all in, from Monday to Friday. That is also how it went with this record. We have like 50 ideas and then we have to narrow it down to like 15 songs. You have a better chance of having 12 great songs minimum if you have 40 songs, then when you only write the 12. I don’t have any song on this record that I look back at and wish it were better.

Q: How do you maintain a proper mind, both mentally and physically?
A: You gotta roll with the punches. This is a very spontanous lifestyle, there’s tours which are really structured, but tours like this one, it’s called drop and go’s. You arrive at the venue and you have to get your stuff and the bus leaves. You don’t get enough rest and you’re exhausting yourself, but at the same time you’re in fucking Europe.

I try to not let it get to me and communicate with my loved ones back home and keep in mind that I’m gonna go home and see everyone, so I won’t let it destroy me.

I’m also grateful for what I’m doing and for getting all of these opportunities. Physical wise: it’s not possible! It’s definitely not the healthiest lifestyle, you drink with your friends and you get almost no sleep. The only workout I do is on stage, haha

Q: Let’s talk a little bit about “Midnight”. The aesthetic is so cohesive, was that intentional?
A: Yes, going into this album we knew we wanted to change things up from the last record. It missed our edge. I’m always gonna write how I feel and with the last record I was in a very happy place. With "Midnight" we were in a really toxic place with our managers and we got dropped by them and didn’t see it coming. We felt unwanted and like we weren't supposed to be doing this. We channeled it in these songs and we wanted to create that edge visually as well. It became Midnight instead of this bright poppy daylight. 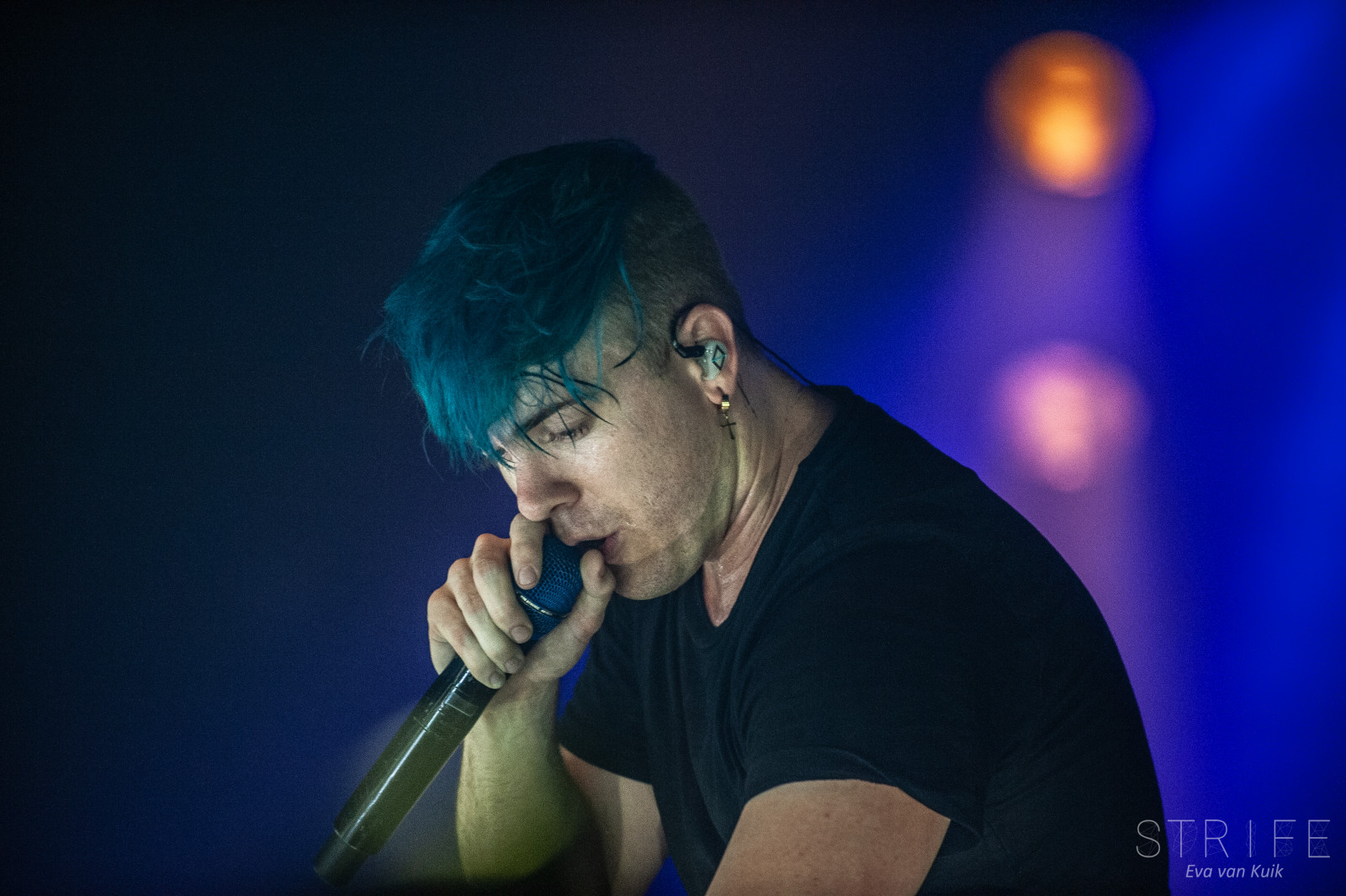 When working on the symbol Max found the hourglass and we really liked it because during a Youtube livestream we wrote a song with fans which was called "Hourglass Love". We wanted to release it and the fans wanted us to release it but we couldn't because there were so many writers so legally we couldn’t so the hourglass was our nod to them like "we’re thinking about you". Also it relates to the songs and the theme and about how precious time is.

I remember when I was singing dummy lyrics, I sang something about “Midnight Thoughts” and everyone really liked it because we were thinking about calling the album Midnight and then I thought "that’s great, then I can sing about midnight thoughts", because so often I’m lying in bed and my mind just goes crazy, so it was nice to write about something that I could generally relate to and that would be in the theme of the album.

Q: What advice would you give to bands who are just starting out?
A: Nr.1 , make sure that you don’t release anything that you don’t think your idols would release, quality wise. It’s important to have a competitive mind set. You always want to have your standards higher than your favourite bands. You have to put that work ethic in it and have attention to details. This is not just a fun thing, this is a job, and if after this change of mindset, you still want to do this, then go for it!