Interview with Jesse Barnett from Stick To Your Guns (Part 1) 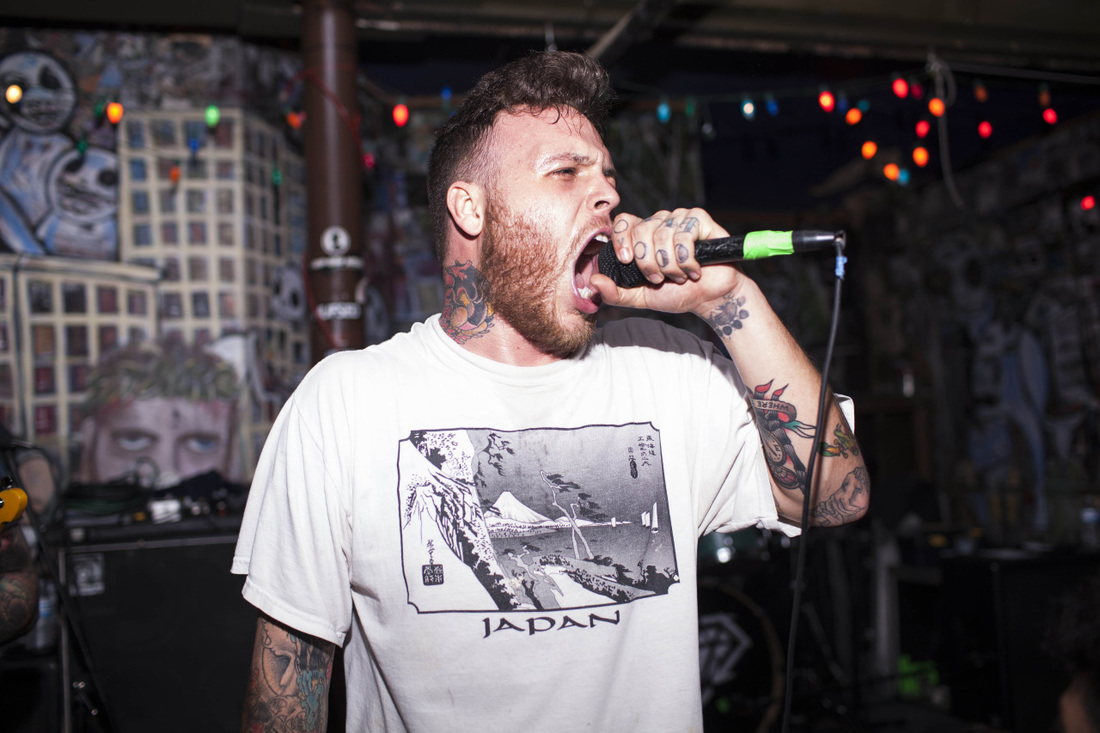 We recently met up with Jesse Barnett, lead singer from Stick To Your Guns, in Cologne where the band supported Architects with quite the killer set. I've actually never seen a support band engage the masses as Stick To Your Guns have that night. But Stick To Your Guns isn't only a band that knows to stun on stage, but also one who knows that the kids nowadays need a type of music that inspires them. Their lyrics deal with social-political issues as you can hear for yourself on their brilliant new EP "Better Ash Than Dust".
Needless to say that our talk with Jesse was everything but boring cause the dude got a lot to say. Here's Part I of this awesome interview in which he talks about supporting Architects, living in a world of terrorism, the disaster of a US-election, what Donald Trump and a dumpster have in common, music with social value and Nina Simone.

Strife Magazine [Melissa Wilke]: How has the tour been so far?

Jesse: We’re about four days in, I think this is the fourth show for us at least. It’s crazy, it’s been absolutely insane. We played Amsterdam last night, it’s been by far the craziest Amsterdam show we ever played, Antwerp was insane, Paris was great. For a band like us supporting is so easy, because all we have to do is go out there and do our thing. When you headline - I see what Architects have to set up every day - you really have to be in it, and when you're supporting you just get the show up and you're like "Cool", just playing and fuck off. It's definitely way more stressful for Architects and their crew and so we're just stoked to be able to be their support. It's been insane. And it's cool because a lot of people who love Architects maybe aren't familiar with us. So we get to play in front of those people. It's an insane opportunity for us.


Strife Magazine: Interesting, because a lot of bands say something like "Oh no, supporting is so hard", because the crowd might be difficult.


Jesse: Here's the thing: with these kind of kids and this kind of music, it's up to you. How you engage with the crowd, and I think even if you're having a show that's not necessarily going the way you want it to go, we're a band that likes to have a lot of fun. We just start fucking with each other. It's just like "Fuck it", we're always playing as hard as we possibly can. No matter the circumstance, no matter how many kids. We’re just trying to have the most fun while also trying to achieve what we're there to do.

Jesse: Oh yeah? That was a good show to see [laughs].

Strife Magazine: Yeah, he texted me "Enjoy the interview, they were so great!" [laughs]
It's almost been a year since the horrible attack at the Eagles of Death Metal show in Paris. Has anything changed for you as a touring band regarding security or maybe even on a more personal level?

Jesse: On a personal level: no. Security..uhm...we come from the United States, so there's not more of a "hand up your ass" country than that, so we've been dealing with that our whole lives. It's an awful thing in a way, that we treat each other like that. I always try to look at every situation, no matter what it is, from multiple perspectives and we can call them terrorist because what they did was awful. They terrorized the whole city and then they killed people and it was horrible. But that was a response reaction. There's something that has happened to them and their country. We have a song called "Universal Language" on the new record and you have these countries...there are countries that are being constantly bombed by Western countries and they are constantly being exploited for their resources and they're constantly being just painted as these horrible people in the media and so they beg and they plead with the rest of the world: "Please stop! Please stop your exploitations, stop your violence against us, please stop!" And all they're met with is violence. And so they're left with no other choice but to respond the conversation with the same language that's being spoken to them and that is unfortunately horrific death and destruction. Until we as people can learn to not be so scared and desperate all the time and go: “Okay let's try to be wise in the situation. Just try to talk to each other and work something out.", I think these things will continue to happen. I've made a choice a very long time ago that I'm not gonna live my life...I'm not gonna fear it. I'm not gonna ruin it by fearing it and if something happens, that's what happens to me then.


Jesse: Exactly, that's life. And I turned 29 in November and I've had more crazy years in my life than people who lived 200. So I'm grateful for every moment or at least I try to be so.

Strife Magazine: Considering that the US election is such a disaster, are you happy that you're living in Canada?

Jesse: Well, I'm happy I live in Canada regardless of what the United States is doing. It's a place that I connect with and it's a place that I really really love a lot especially Eastern Montreal and Quebec where I'm living. You know, it's French. It feels very European. I love being in Europe. There are many cultures there and I personally love it. I try not to even comment on the election, cause there's nothing else I can say that hasn't been said already.
It's a fucking disaster, you're right. It's horrible and a lot of people are really...well, Trump is a problem. He really is, but I don't think that he's THE problem. THE problem, in my eyes, is  that there is a system in place in the Unites States in which a person like Donald Trump can even be in that position to be running for the president to begin with.

Strife Magazine: It's so crazy right?

Jesse: It's fucking crazy! He has the intellect of a fucking dumpster. He has the emotional intellect of a bag of trash. He deserves to be living in the street. And this is a person who is apparently gonna be running our country now. I don't wanna get into all sorts of other shit at the moment, but what can you do, it's just fucked and so I try to look for a silver lining in everything, but I think that there's a youth that is tired. And I think that this major election is the last of a dying breed. Hopefully people will start realizing "Okay, there's a problem and something needs to change now.” A lot of the older generation looks at our generation like: "Oh you fucking millennials, bla bla", but they left us with so much mess and they fucked up so many fucking things. It's because of their generation, why Donald Trump's even allowed to be running for president and then they look at us going like: "What are you doing?"! Try to clean up your fucking mess is what we're trying to do!
Yeah, it's a bit of a nightmare, but I guess that I try to look for a silver lining in everything I can. I'm confident that Donald Trump will not be the president of the United States. If he is, what will that mean for me and other people? I don't know. Because at the very least, why I wouldn't want Donald Trump to be president is, because I don't want him to be able to assign supreme court justices who get to hold their position of power for their entire lives. That's where laws are created for equal rights, for communities of colour or for LGBTQ people and so you don't want people who are friends with him making those decisions. I'm confident it won't be as I feel like it just doesn't seem likely. It's fucking crazy and if it happens then we are truly living in a George Orwellian world and everything's fucked.

Strife Magazine: On Better Ashes Than Dust, your EP, you're quoting Nina Simone who said that it's an artist's duty to reflect the times. So you think it's an artist's responsibility to take a stance to give their music a social value?

I absolutely think so. We were just talking about this backstage the other day. There's a reason why there's an FBI file on Wu-Tang Clan, there's a reason why there's an FBI file on Rage Against The Machine, there's a reason why there was FBI files even back when the Beatles were doing their thing and The Doors and Led Zeppelin because the FBI, the Federal Bureau of Investigation, the Federal Police, knows that there is pretty much nothing more influential than music. That's why I think, and not to sound too conspiracy theorist, you have absolute dummies - well that's not fair to say - you just have people like these pop stars who are saying things that have absolutely no social or political value whatsoever, why that is in the mainstream of music. Because as long as there is that -  talking about drinking and going out and whatever it is. That's fine, if you wanna do that but it's numbing. And it's not something to inspire anyone. It just continues to add to our generation of kinda dull and dead minded people. That's why it's important to us, and to a lot of bands that are out there who probably aren't getting the recognition they deserve, to save things and that holds weight, especially with how sick our world is. It's past cancer right now and it's sick and dying. By making it more numb and by trying to avoid the problem, it's just gonna make things worse. Yeah, I think she's completely correct. When I heard that in a Nina Simone documentary I was just like...she was already a person I grew up on and I love her music. She's the fucking queen, that why they call her the queen. She's just amazing and she's been so influential in her community as a black woman and even to a fucking white kid like me who she probably never thought she'd be able to reach. She touched me, struck a chord with me and so I've always loved Nina Simone. People called her crazy. People called her crazy cause she saw the world for what it truly was.

Stay tuned for Part II of our interview with Jesse Barnett of Stick To Your Guns! ​Written by Melissa Wilke