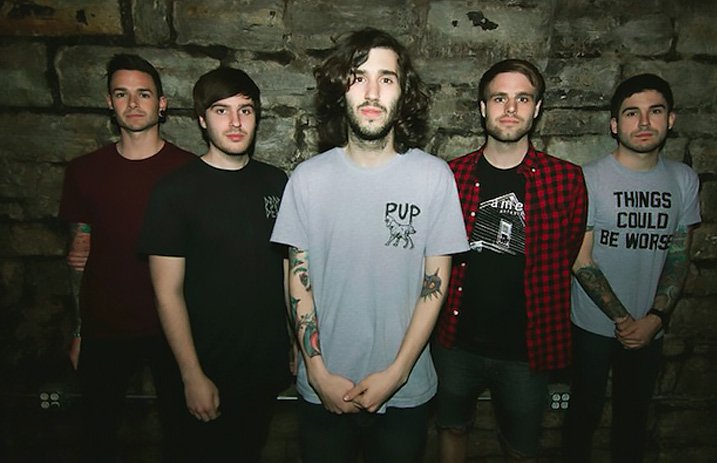 Earlier this year, we had a chat with Kyle Fasel from Real Friends and discussed a variety of topics ranging from their sophomore record 'The Home Inside My Head' to playing mainstage on the one and only Vans Warped Tour.
Real Friends aren't near to being finished and are gaining popularity rapidly with their energetic and emotional poppunk highlighted in tracks such as 'Colder Quicker' and 'Empty Picture Frames'.
Check out the chat we had with Kyle Fasel below.


First of all congratulations on a huge year in many aspects but, specifically the release of your Sophomore album 'The Home Inside My Head'. It’s apparent your music means a lot to your fans, how has the response been for the new album overall in your eyes?
Thanks! The response has been overwhelming in the best way possible. It's kind of scary releasing new music. You never know what people will think. There's so many bands these days that it's easy to be written off. But the response has been great. It gives us that much more motivation to work even harder.


Overall, the album marks an evolution of the band into a more distinct sound from your previous work, what exactly influenced this change? (experiences, relationships, other music etc.)
I think just getting older and finding new subject matter played a huge roll in pin pointing the feel we were going for. We tried to make the lyrical content a little more cinematic and imagery heavy as well. We also just really wanted to grow as song writers. We really really pushed ourselves musically. We were given more time to write as well. That helped.

This is a pretty basic one but what’s your personal favorite song from the new album and why?
I personally really like the song Mokena. It's a little slower. I lean towards slower music as a listener. The song just has a lot of raw emotion. It really grabbed me even when we were first writing it.


Let's look back at 2016:
You guys released a great new album this year & were on Vans Warped Tour all Summer long.
How was it like to be back at Warped Tour?
It's the hardest tour you can do. It's all outdoors so the elements play a huge roll in it. It's the best summer and the worst all wrapped into one. But at the end of the day we love it. It's been amazing to play the main stage. Never ever did I think we would be able to do that. It's a dream come true.


Looking back at Vans Warped Tour, were there any specific bands you really enjoyed seeing perform in front of all those people?
It's been great to watch The Maine, Mayday Parade, Cruel Hand, and Knuckle Puck. We have toured with all of them before so it makes it feel a little like home.

This year wasn't your first time on Vans Warped Tour, what’s your all-time favorite memory from the tour?
In 2014 we played our hometown Warped Tour date and it was amazing. Honestly felt like a movie. We probably played in front of 5,000 people. So many family and friends were there to share the special day with us. It was surreal. Some of us cried after our set. It was real.


As a band you promote the idea of people supporting their local music scene regularly, what are some of your favorite local bands?
Local music is so important! There are some good local bands by us. Everyone should check out Bonfires, Sudden Suspension and As We Once Were.

This is an odd question but it’s something I’ve always wondered about. On your debut album you named dropped Konstantine by Something Corporate. What does that song personally mean to you that made it something to reflect on in your own work?
That song is just important to me. It was a song I connected with when I was going through a bad breakup. I wasn't able to listen to the song for a really long time. It brought up hurtful emotions in me. But now I can listen and feel good. It's great to see how you can see emotional growth through music. Love it.

Obviously this last year has held a whole variety of high points for the band overall, what’s been the best memory?
Recording the album was the best thing. It was a huge step for us. We stepped out of our comfort zone big time. We recorded out in California. Every other record we recorded in Indiana. Which is much closer to home for us. But just really making the record the best we possibly could was important to us. And I really think we did it. I'm proud of everyone.


Enough about the past, the future of Real Friends is looking as bright as ever, anything specific fans should be excited about that may be announced soon? Thank you so much for the opportunity and for taking the time to answer our questions!
Maybe some more touring. We will see! Can't wait to play more of these new songs live. And thanks for the interview and your time. Have a great day.