Jera On Air Day 1: Bands Of All Genres Made For A Successful And Hot First Day 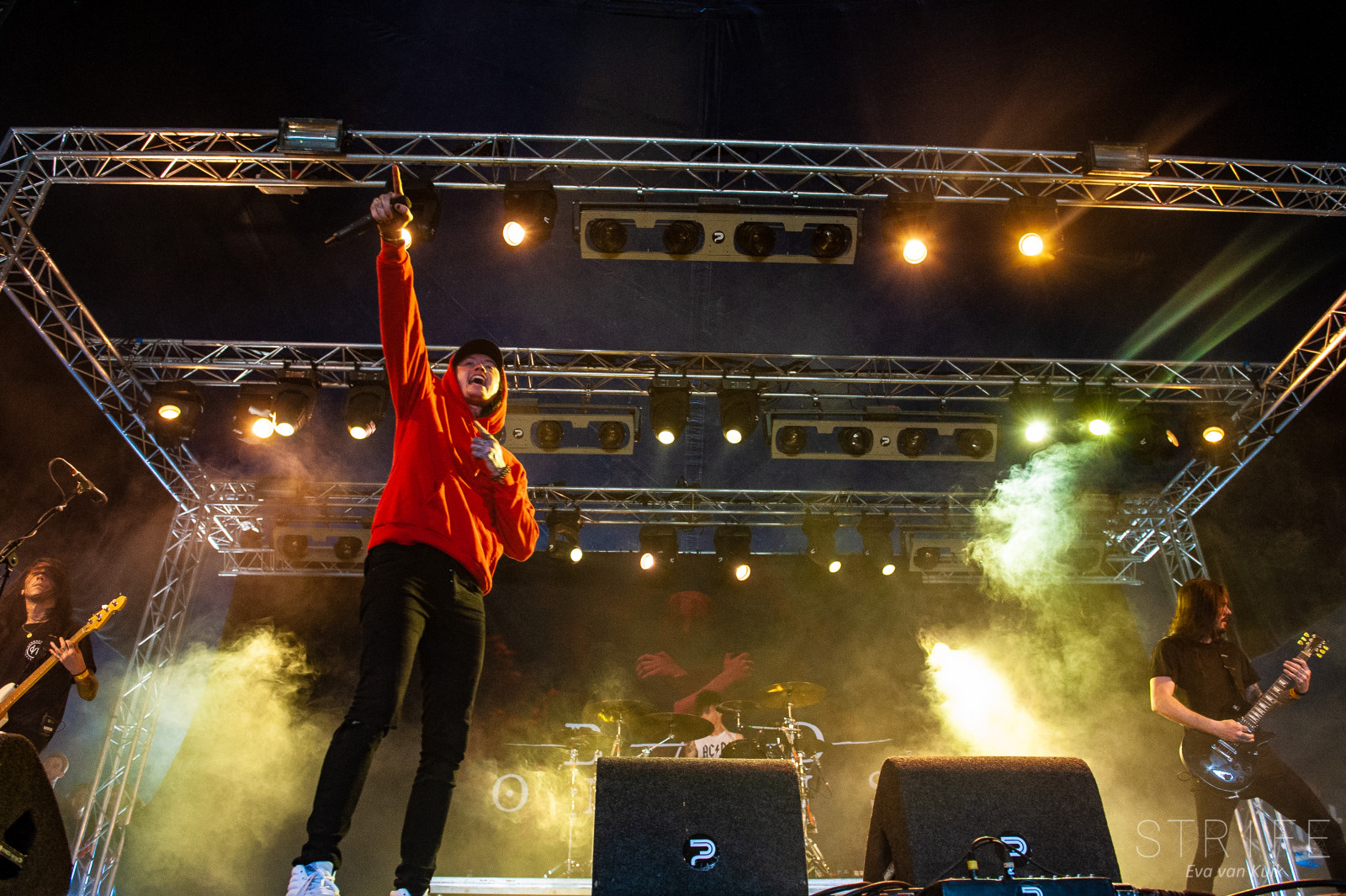 Jera on Air, the Netherlands’ pride and joy when it comes to metal, punk and rock festivals. Where Germany has Rock Am Ring/Rock Im Park and Belgium has Graspop, we have Jera On Air. Sizewise Jera On Air can’t compete with the aforementioned festivals, but the atmosphere and line-up of this year make up for all that.

Jera On Air 2019 kicked off for us with the metalcore act from the US, Bad Omens, who played their set on the Vulture stage, which is the second of three stages. The band are currently in the process of releasing a new album, and have so far dropped three tracks off of their upcoming record. Armed with their debut record ‘Bad Omens’ and the new singles, Bad Omens displayed metalcore of the highest order and had the tent packed even though they played so early in the day. With heavy tracks such as ‘Malice’ and ‘The Hell I Overcame’, Bad Omens had the moshpits whirling even with this heat, while the audience screamed the lyrics back at the end when they played their most popular track ‘The Worst In Me’. All-in-all, Bad Omens made for a heavy and delightful opener of the weekend and you can check out the photos Eva van Kuik shot right below.

At 15:00 it was time to take ourselves to the Buzzard stage, which is a slightly smaller tent for the very underrated, yet incredible band Cane Hill. The band had two albums under their belt when they decided to record a semi-acoustic EP ‘Kill The Sun’. Unfortunately none of the tracks from this EP were played, so Cane Hill’s set was filled with heavy metalcore tracks. Songs from the first album ‘Smile’, such as ‘Ugly Model Mannequin’ and ‘The New Jesus’ were welcomed with a big moshpit - and tracks from the follow-up ‘Too Far Gone’ were greeted just the same. Unfortunately, singer Elijah Witt’s microphone was a bit low, therefore the instrumentals took over a bit, and Witt’s incredible range couldn’t be admired as much as we would have wanted, but overall Cane Hill proved again they are a band of great skill, both musical and entertainment wise.

The day continued with two pop-punk bands rocking the Vulture stage. Both As It Is and State Champs performed at Jera On Air on this warm day. Eva van Kuik checked out both bands and you can check out the photos she made in the galleries below.

The first day of Jera On Air was also the day FEVER 333 played the festival grounds. In their relatively short lifespan, the trio has gotten themselves a massive following and all the music photographers know not to miss their set, as they are bound to be a few epic photo moments throughout the first 3 tracks. The band surrounding former letlive. frontman Jason Aalon has been making massive waves and are already playing the festival’s Mainstage with just the one album. FEVER 333’s performance is a whole bunch of crazy and their music follows the same rhythm with a political undertone. FEVER 333’s shows are known as demonstrations and let’s just say that Jera is going to need to recuperate for a while. FEVER 333 will be taking on Europe again this November for a string of new demonstrations and we highly advice you grab yourself some tickets.

Arguably the heaviest band on the line-up for the day played at the hottest moment of the day and while they are quite the heavy act, they are also incredibly popular. With a relentless force as vocalist, whose screams are of the ruthless persuasion, Whitechapel are a force with the ability to blow the Eagle tent completely away and that is exactly what they came here to do. Armed with a brand new album ‘The Valley’ and numerous hits from previous albums such as ‘The Saw Is The Law’, Whitechapel’s performance was an incredibly familiar endeavour. Whirling moshpits, heavy songs and an all-round great atmosphere made for Whitechapel’s set to be a great success. Let’s hope they return to The Netherlands sooner rather than later! Check out the performance of the band through the lens of Eva van Kuik in the gallery below.

Next up are the incredibly popular Beartooth, whose music can be best described as metalcore, with a hint of hardcore and very catchy choruses. Beartooth hit a home run with their first album ‘Disgusting’ and have been increasing their fanbase ever since. Beartooth have three albums under their belt now, with the most recent one being ‘Disease’ and each album has spawned some incredible hits, making the band’s performance a massive sing-along. Songs like ‘In Between’, ‘Disease’ and ‘You Never Know’ were all greeted with a massive hype and great crowd participation. Check out the photos from the band surrounding Caleb Shomo in the gallery below.

We sat down with Sum 41 bassist Cone McCaslin in the afternoon to discuss the band’s upcoming album ‘Order In Decline’ and were so excited to see a full set from the band again. It was going to be the 7th time we have seen Sum 41 live since 2012 and they never disappoint. With three tracks from the upcoming album already released, we got to hear two brand new tracks in a live capacity - and if we have to believe Cone, they are a great representation of the upcoming album overall. With three guitarists, Sum 41’s new music revolves around great riffs, exceptional solo’s and just overall musical excellence. The new tracks ‘Out For Blood’ and ‘A Death In The Family’ showcased that like no other. Production wise the band brought the heat, with props such as a massive skeleton on stage and Sum 41 themed flags and stereo’s. The band’s impressive discography has more than an hour worth of singles, which made for some painful cuts in the setlist. Luckily, hit singles such as ‘Still Waiting’ and ‘In Too Deep’ were played, sending everyone back 10 years in time. Sum 41 live truly never disappoints and we are so excited for the band’s upcoming record. Check out the photos of the show below and let us know if you are planning on checking out Sum 41 somewhere this summer.

Closing out the first incredible day of Jera On Air was the boundary-breaking Enter Shikari from the United Kingdom, whose music cannot be put in a certain genre box. With each release, the band reinvent themselves, with the latest experiment being the 2017 album ‘The Spark’. With the latest album, Enter Shikari was more pop-oriented than anything else and while the album has some incredible songs on the list, the songs from this album did not spark the reaction the band’s older material did. Heavier songs like ‘Destabilise’ and of course ‘Sorry, You’re Not A Winner’ got a reaction most bands can only dream of, while the crowd remained timid during the performance of slower songs. The annoyingly brilliant ‘Rabble Rouser’ did succeed in getting the crowd properly going. Enter Shikari properly tailored their setlist to the crowd of the evening. Jera On Air is known for its heavy line-up, and Enter Shikari have done their duty in upholding the heaviness. Check out the photos of Enter Shikari’s performance in the gallery below and we’ll see you back tomorrow for a highlights reel of day two!