LIVE REVIEW: Panic! At The Disco Display Greatness On First European "Pray For The Wicked" Show 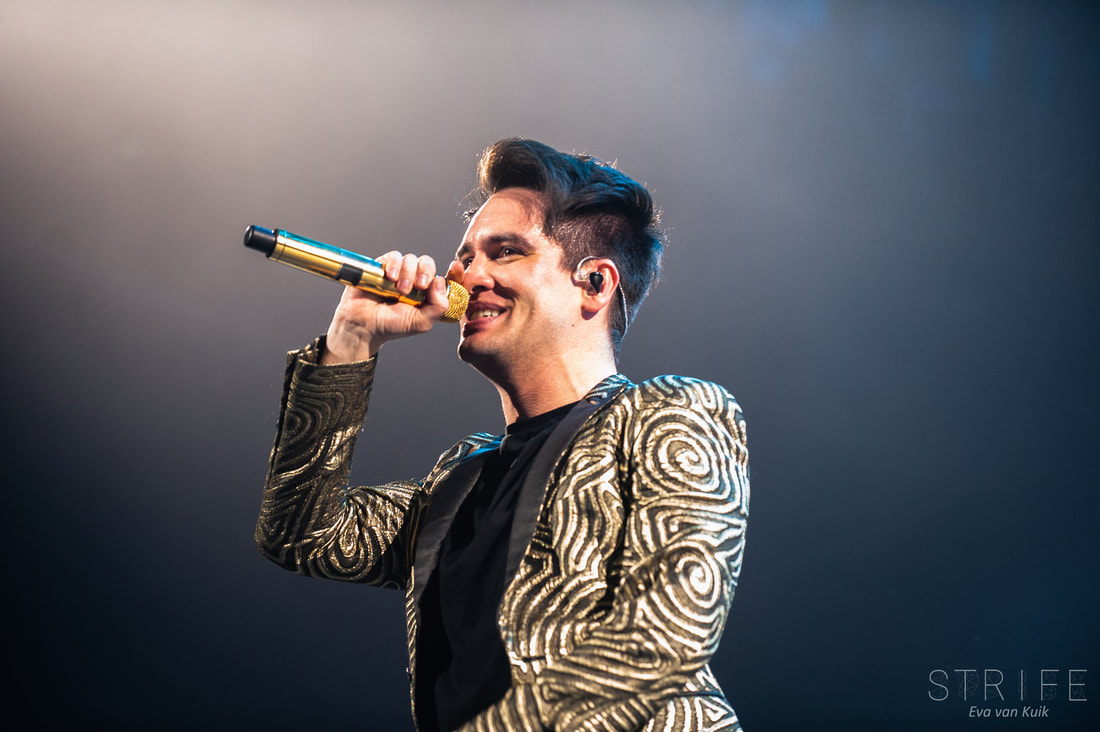 â€‹After a long, long wait, the time had finally come. Brendon Urie and his band, better known as Panic! At The Disco came to Europe to promote the new album "Pray For The Wicked" for the first time in front of European crowds - with the very first show taking place in Amsterdam's AFAS Live. A venue with a capacity of 6.000 which was sold-out in no-time.

Ten minutes prior to the show, a timer was shown, counting down the literal seconds before the band took the stage. Throughout the ten minutes, the hype grew, while time seemed to slow down. When the timer finally hit 0:00, the band came on stage, accompanied by several musicians playing trumpets, violins - as those instruments are heavily present in Panic! At The Disco's new music.

The band kicked off their massive set with "(Fuck A) Silver Lining", which was together with "Say Amen (Saturday Night) the first track the band released in the "Pray For The Wicked" era. Especially in comparison to the last time Panic! At The Disco played Amsterdam, the Pray For The Wicked tour was incredible - and a lot more time and effort was spent on the production surrounding the band's incredible performance.

Screens were set up behind the band and the show was filled with fireworks, fire and confetti, which made the performance just that little bit more enjoyable - not as if the musicians on stage themselves weren't entertaining enough. Brendon Urie is one of the best entertainers we have ever seen, and relative new members Mike Naran and Nicole Row have both been welcomed to the family and are stellar performers just the same.

The show this evening was a celebration of the band's long standing discography, and while a lot of new tracks were being played, there were also a ton of older songs that were performed this evening. In approximately two hours, Panic! At The Disco displayed live renditions of 28 tracks in total in front of an ecstatic audience.

It's not until you are actually witnessing the show that you realise that Panic! At The Disco have so many incredible and catchy songs when you hear them live one after the other. The setlist, besides the nine tracks from "Pray For The Wicked" had atleast one track from each album they released, with the earlier albums being represented by "I Write Sins Not Tragedies" (A Fever You Can't Sweat Out) and Pretty. Odd by "Nine In The Afternoon". The third album "Vices & Virtues" was represented with two tracks - "Ready To Go" & "The Ballad Of Mona Lisa", but the majority of the setlist consisted of tracks from the last three albums, which have also been the albums that Brendon Urie worked on while being the sole member of the band.

The songs were being played with a high pace, but Brendon Urie did take some time in between of tracks to speak to the crowd. When the band kicked off the LGTBQ+ anthem "Girls/Girls/Boys", Urie grabbed all the pride flags he could find in the crowd, which resulted into what can only be described as a huge coat or blanket of flags. After the track, Urie shared that this must have been the most flags he ever got during a performance, after which he shared an inspiring speech, celebrating individuality and acceptance of one another.

Brendon Urie's stage presence is impeccable and it is admirable how he can move as much as he does, for as long as the performance lasted. For little bits and pieces, Urie's voice was a little off, but this was hardly noticable and didn't disturb in the slightest.

All-in-all, especially for the European fans, this has been the most memorable Panic! At The Disco show in a long time. Comparing the show to those of the "Death Of A Bachelor" and "Too Weird To Live, Too Rare To Die!" tour, "Pray For The Wicked" was just smashing and unmatched. We feel very fortunate to have witnessed the band's performance, and the fact that it was the first show of the tour made it just that little bit more special.

Below you'll find the photos of the performance. All photos were made by Eva van Kuik.