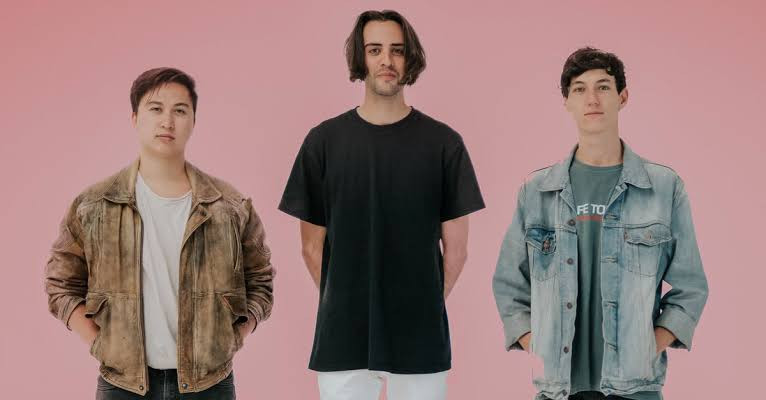 In the span of a few hours, you and the surrounding audience get to experience just how much the artist, that was once wandering the same streets as you, has grown, proving that there are no limitations surrounding location, and that it is truly talent and determination that sets acts apart.

Within the last few years, Australian pop-punk band, With Confidence, have been swiftly increasing in popularity, becoming a prominent name within the scene. After the exceptional reception received after the release of their most recent album, ‘Love and Loathing’, it was inevitable that the boys would take this amazing collection of songs on the road. After an already extensive run of shows, it was time to deliver to one of their biggest fan bases- the Australian audience. In particular, the fans of Sydney. 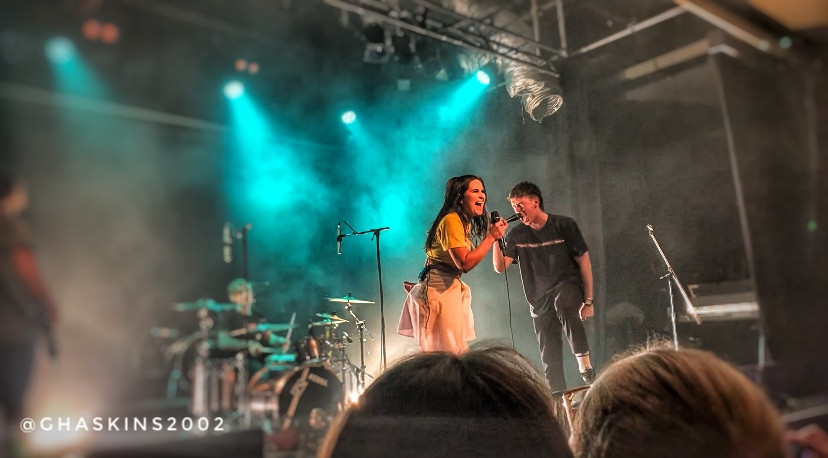 Housing the show for the night was the incredible Factory Theatre. Although often described as a small venue, the room squeezes more than enough people within every time; creating an energy like no other, and an environment with outstanding electricity.

Crammed into every corner and sprawled across every inch of grimy floor, individuals were eagerly awaiting the start of what was to be an impeccable night.

In order to kick off the event, With Confidence enlisted the help of some of Australia’s finest up and coming acts.

Initialising the night were Stuck Out, a rock band from Melbourne who pack a punch, both musically and in performance. From the first seconds of their set until the moment they walked off the stage, their energy was second to none. It was evident to see that they were aiming to showcase not only their talent but why they deserved to be the opening spot for such an iconic Australian band. In my eyes, they did much more than prove this; but also demonstrated why they deserve to be the next band from Australia to go big. To be expected, there were the usual uninterested attendees, seeming to conserve all their energy for the main act. Despite this, Stuck Out’s energy never diminished! Instead, they fought back - connecting with a plethora of fans who were already screaming the lyrics back to them. Already owning the hearts of many of the fans, and certainly winning over some new ones on this night, Stuck Out will only become more prominent within the scene. Their emotion is genuine and is evident within the recorded tracks, on stage and in general conversation. Nothing is left in the tank by the end of the performance, instead allowing it all to spill on stage; the ultimate depiction of true performers. Even after exerting all the energy they had, they still made time to chat and take pictures at the merch table, truly putting the fans first. I can not speak highly enough of Stuck Out, and having witnessed their live show has converted me into a fan of their work. I recommend tapping into their latest EP, ‘You Won’t Come Home’ to acquire just a slither of the passion and emotion they spilled on the night.

Next up was the incredible Stateside. If you have attended gigs within Australia, it is almost impossible to escape the incredible four-piece band. As openers and headliners, Stateside are opportunistic, jumping upon every performance slot they can. Their determination and pure passion for performing has seen them rocking out with some of the scene’s finest, such as All Time Low. Due to this, Stateside’s fan base is large and dedicated, with many fans arriving at shows purely for their music. As drastic as this may sound, this notion becomes a little less far-fetched when the opportunity to see them live arises. Much like their fellow acts, the energy poured out upon the stage was absolutely incredible, filling the room with a harmonious, ‘feel good’ vibe- warming up the crowd just as they intend to do. Despite the effortless perfection and incredible live performance, there was one moment within their set that stood out to me in particular. In light of some unfortunate circumstances regarding a member of the band, Stateside took a moment to have a serious conversation; one that is all too sparse in shows such as these. Erin halted the role of front-woman to extend her knowledge and advice on to the crowd. Between the audience and artist, a large discussion regarding the importance of mental health was had, alongside the acknowledgement of practicing what you preach- particularly when it comes to the scheme of mental health. By the end of this moving and inspiring chat, there were no dry eyes to be seen. For a moment, everyone was silent, taking the time to process the essential messages that were just unveiled. However, this was only met with a roar of applause; directed towards Ethan, the member in which this important conversation arose from. It was clear that both Stateside and the fans wished to conclude with passion, making up for the void that was left from the absent member. Through a remarkable banding together of people, the crowd represented him in the best way possible, showing him tremendous support from a distance. With all this in mind, the set went on with the same exhilarating spark that it had before. 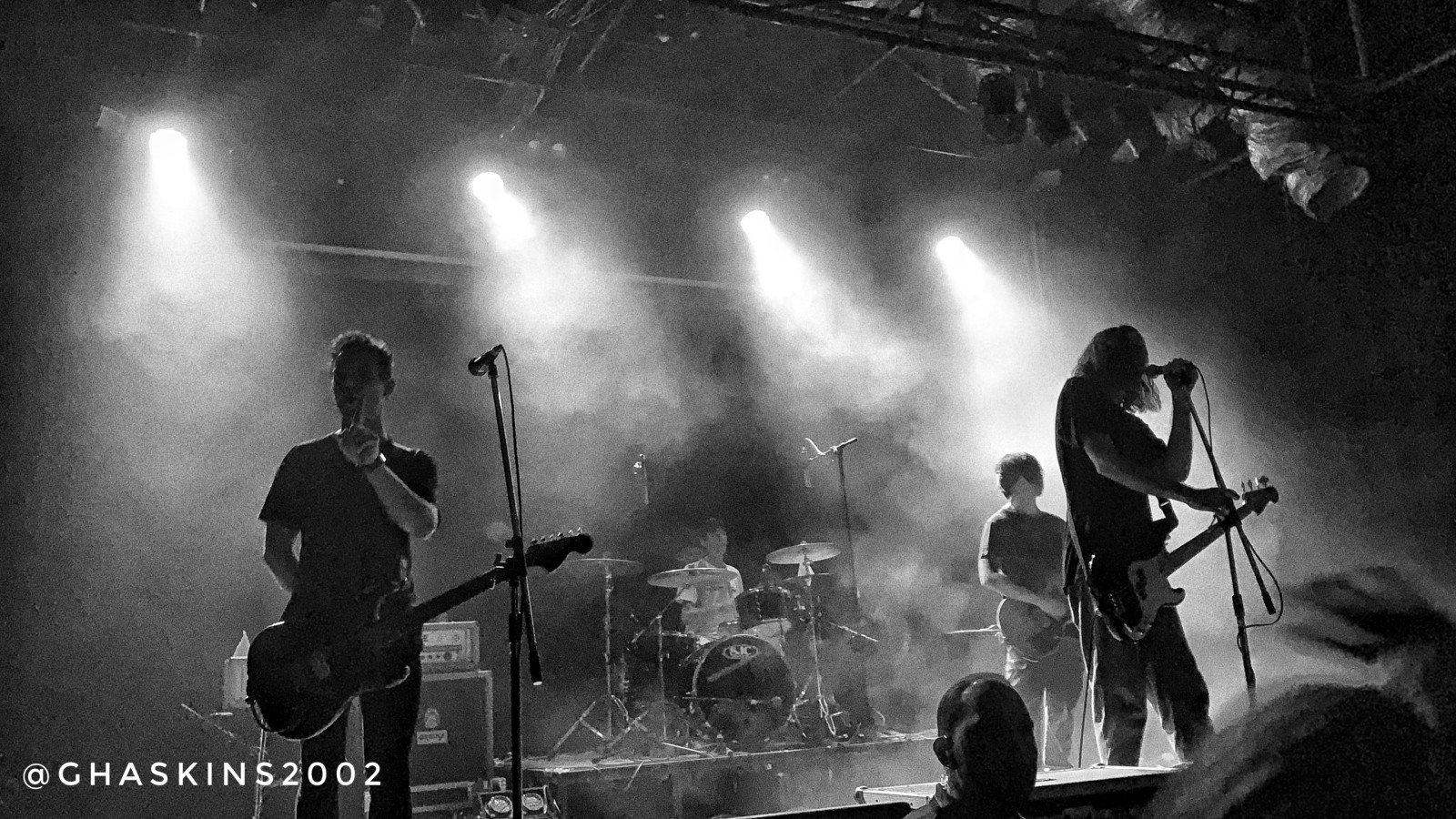 Not only did Stateside conduct an exemplary performance, but they took the time to delve into subjects that often remain untouched. Although some may argue that it dampens the mood of the night, discussions that have real-life applications are by far the most hard-hitting and important. Sometimes it takes a band to use their platform to spread key messages, to finally make it click, to make the audience aware. It becomes even more jarring when someone you love is affected, in this case, Ethan to the fans of Stateside. The discussion held that night was one of indisputable importance- one that may just be a lifesaver in the future. I truly applaud Stateside for using their platform to shed light on such shadowed topic, and I truly wish Ethan the best on the road to recovery.

At the conclusion of these two stellar opening acts, it was finally time for the homegrown heroes, With Confidence.

The prompt introduction to ‘Moving Boxes’ was met by the roar of the eager crowd- anyone from outside the venue could certainly tell the big moment had arrived. With precise execution and outstanding vocals from the get-go, you could tell we were in for a night to remember.

Song after song, With Confidence effortlessly streamed together an incredible setlist ranging from newer, older, B-Side and popular tracks. There was truly something for everyone. This catering to the audience ultimately showed within the floor that night. No one was still, and better yet, everyone seemed to be enjoying themselves. Whether they were dancing on the spot or joining the occasional circle pit, no one could defeat the spreading joy that this band unleashed. With Confidence’s performance truly encapsulated one of the biggest recurring notions of the night; the energy that the artist puts out will ultimately be reflected in the energy of the audience. A night with three acts notable for doing just this is exhausting but truly encapsulates what a show is about. They are about having fun, making connections, and ultimately giving back to the artist through your presence- both literally and metaphorically. After a mostly high-intensity show, there were a few moments that were dedicated to intimate interactions- ones enhanced by the small nature of the venue.

Playing upon Erin’s emotional impact, she was invited to the stage yet again to perform ‘Pâquerette (Without Me)’ with the boys. This stripped-back feature of the night was astonishing and depicted the true emotion that is held within every song, performance and lyric. Sometimes these elements become overshadowed by the instrumentals and flashy lights, but moments like this showcase the prominence of such thought-provoking ideas and messages within the tracks of bands, in this case, With Confidence.

Yet another sombre moment was reached towards the latter end of the show. To the disgust of their record label, With Confidence performed their cover song for the second volume of the ‘Songs That Saved My Life’ compilation, ‘Drops of Jupiter’, weeks before its release. To many, this was an incredible moment, inducing jaw-drops and teary eyes throughout the venue. The original beauty of this song was only heightened by the talent of the band, and the emotional connection they build with the individuals surrounding them. It was an unforgettable moment, yet again linking back to the important discussions held by Stateside that night. Such a performance only boosted the advocacy for such a salient topic, highlighting how essential it is to discuss such notions freely and without judgement. 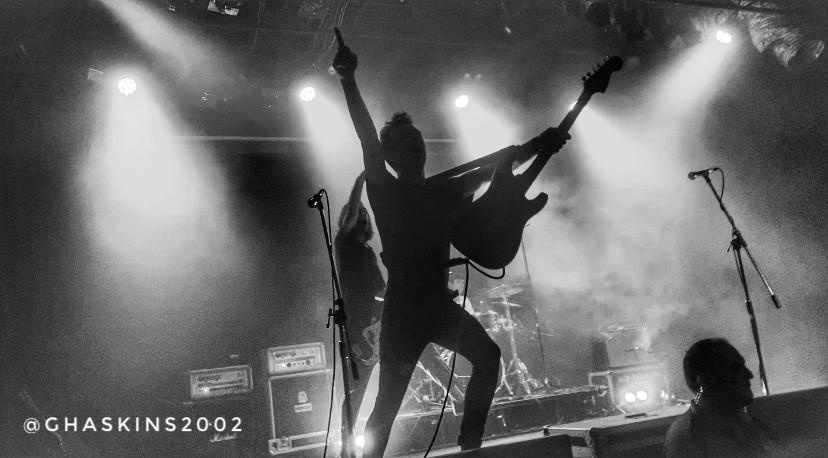 After a rollercoaster of a night in terms of emotion and songs performed, With Confidence concluded with two of their most beloved, impactful and crowd-dependent songs to end on the biggest high of the night. ‘Icarus’ and ‘Voldemort’ were left until lucky last, but were met with just as much energy and excitement as the first few songs. Songs such as these displayed great unity within the venue, creating a true connection within a room of strangers. It was certainly something to behold.

One of the most heartwarming moments of the show was constantly seeing the band members smiling and enjoying themselves too. This was their hometown show, the people in which they grew up with and created their musical environment around. Now, those same people are chanting the lyrics they created right back at them. I feel as though there would be no greater measure of success.

As the night came to a close, I feel as though the success and triumphs met by With Confidence had only just sunk in. This show was a small portion of a world tour, it was a show representing a body of work, a show that has marked their growth since their last appearance in Sydney. For that reason, it was both inspiring and emotional to see how they have grown, developed and used their platform for good.

After a night filled with three amazing acts, I was left beyond satisfied. I can not speak more highly of these acts if I tried, and a large portion of this admiration came from what I saw on the night. All three bands show so much energy, a tremendous amount of talent and a passion that lies within music. In particular, With Confidence truly highlighted the significance of hometown shows for me. I can imagine how many familiar faces were in the room, and how many of these faces have watched them grow into the incredible, world-recognised act they are today. I can not wait to see them at a show in the future, and hopefully allow these warm memories to come rushing back. If With Confidence head out on a show near you, I would highly recommend going. I can confidently say you will encounter a very memorable and emotional night.