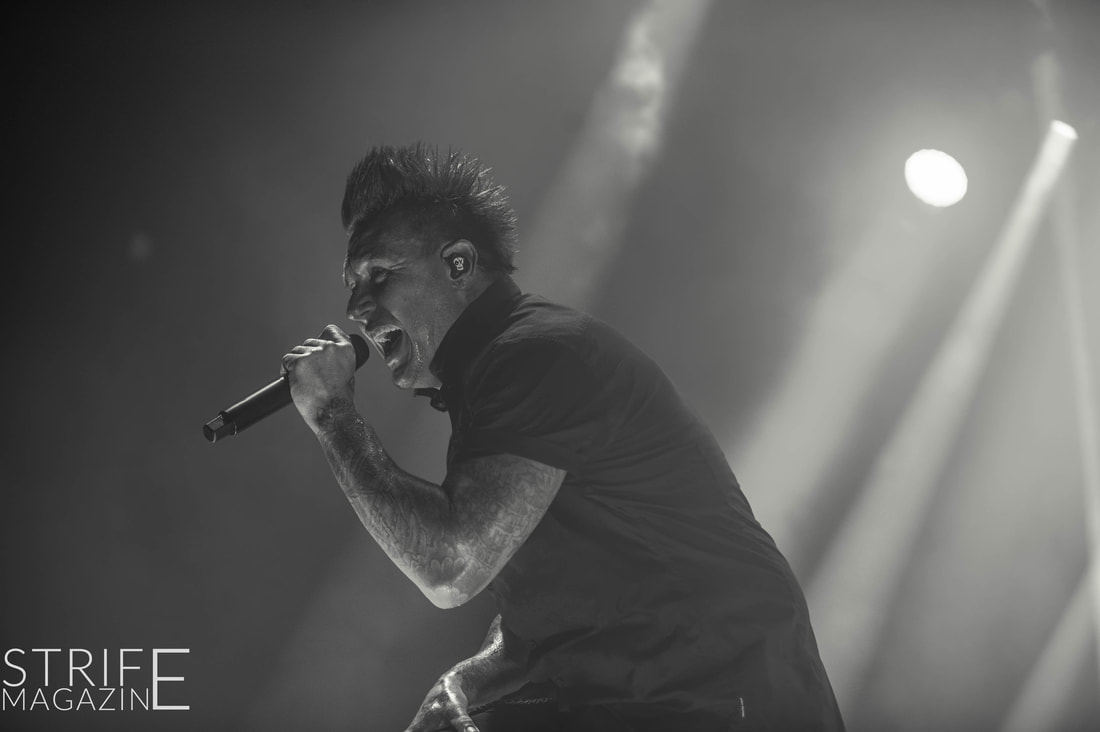 â€‹Papa Roach made their glorious return to the Netherlands headliner style. Last time they visited the Netherlands, they joined forces with Five Finger Death Punch for a big show in Amsterdam. This time around, Papa Roach submerged to Tilburg to play a venue they haven't played in the last couple of years: Poppodium 013. 3.000 fans have been awaiting the evening in high anticipation and now that the evening was finally here, all the stored energy came pouring out one track at a time.

Papa Roach have recently released their new record Â¨Crooked TeethÂ¨, a record filled with tracks that are already making their way to becoming fan favourites. Tracks like title track Â¨Crooked TeethÂ¨ and Â¨TraumaticÂ¨ were among the highlights of the evening, but then again, which track wasn't? The setlist Papa Roach picked for the evening was filled with fan favourites taken from all era's of the band, which in 2017 are quite a lot, given Papa Roach's discography spans 3 decades. Old classics such as Â¨Dead CellÂ¨ and Â¨Between The Angels And The InsectsÂ¨ were properly received, but also newer tracks such as title-track of the 2015 record Â¨Face Everything And RiseÂ¨ spawned a whirling moshpit.

From moment one onwards, frontman Jacoby Shaddix was as energetic as ever, jumping, dancing and moshing around the stage. When a band has been playing together as long as Papa Roach have, you have certain expectations when it comes to the execution of the tracks. Let me just tell you, they will 150% deliver on that expectation. Sound technique wise, the sound was perfect. The drumming was clear and noticeably, the riffs were sound and skill wise stellar and the bass was loud, but not too loud. The all-in package that Papa Roach deliver was exactly what you'd expect and more from a band with more than 20 years under their belt.

While the majority of the show was high-energy and whirling moshpits, the band took a step back a few times during their set, delivering themselves as well as the warriors in the pit with a little breathing room. Among a few others, Â¨PeriscopeÂ¨, taken from the band's latest record and the reason the band was here in the first place: Â¨Crooked TeethÂ¨ was one of the slower tracks on the setlist. Of course the classic Â¨ScarsÂ¨ and a slowed down rendition of Â¨LifelineÂ¨ were also among the 20 tracks that were being played this evening.

A special moment occurred when the band played the emotionalÂ¨ForeverÂ¨. As the track progressed, Papa Roach threw in a riff to shift the track's regular progression to Linkin Park's Â¨In The EndÂ¨, followed by an emotional speech in honour of the late Linkin Park frontman Chester Bennington. When emotions ran high, Papa Roach resumed their set with the slower version ofÂ¨LifelineÂ¨ and Â¨HelpÂ¨, another track taken from the band's Â¨Crooked TeethÂ¨, which also concluded the band's regular setlist.

As very common, the band returned to the stage after a small break to perform an additional four tracks, with those tracks being among the biggest hits of the band and of course the biggest hit of them all: Â¨Last ResortÂ¨.
During the performance of this track, Jacoby Shaddix decided the stage wasn't big enough for him and he jumped into the crowd, performing the rest of the track while moshing with the fans. To close the evening for real, the band performed Â¨... To Be LovedÂ¨. an anthemic sing-along jam that was very well known  among the attendees.

When it was over, 3.000 fans left the packed venue with satisfaction and a bright smile on their face. Let's hope Papa Roach will return to our little country rather sooner than later. All the photos of the show we took that evening can be checked out in the gallery below, courtesy of Eva van Kuik.