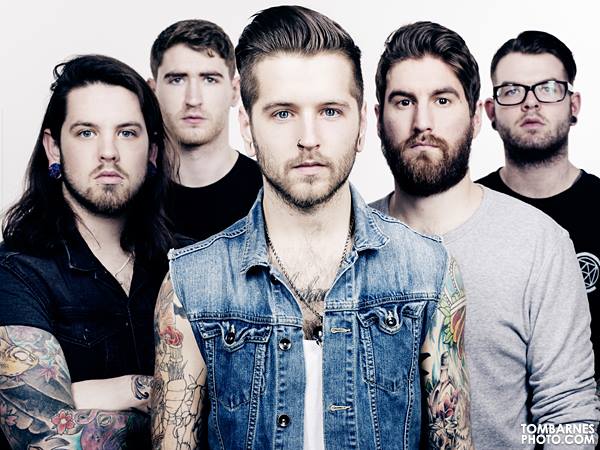 After a quick pit stop for food and a quick loo break, it was time for the set that I was in equal parts excited and terrified for: Bury Tomorrow, a five piece metalcore band from Southampton whose live shows, rumour has it, can get pretty rowdy! I’d been joking with some friends earlier in the week about leaving Bury Tomorrow with broken limbs, and when I saw the mosh pit begin to open up at the beginning of their opening track ‘Man on Fire’, I did fear the worst! That is, until the band themselves kicked the party into full swing, and I forgot to care anymore!

From the beginning of the first song, I fell in love with Bury Tomorrow, and despite the somewhat stagnant crowd around us, my friends and I, after pushing our way through to the already anarchic mosh pit in the centre of the square, fell headlong into the atmosphere of this utterly raucous metal party! The relentless driving bassline of ‘Knight Life’ provided by bassist Davyd Winter-Bates added the fire and vigour to the circle pits and anarchic walls of death which turned Millennium Square into a wild untamed frenzy, which sent pulses racing and drew delighted, thrilled squeals from the mouths of many, including myself as people of all genders ran with wild abandon to join the fray! The galloping guitars gave ‘Cemetery’ a somewhat ironic lift that dragged it out of the murky depths and created an undulating rebound in the lower half of the mix which worked heavily in the track’s favour, and the pounding downforce from drummer Adam Jackson in the choruses blended perfectly with the clean vocals, providing all the intensity and power that was necessary to keep the crowd’s fists firmly in the air and the circle pits forever spinning like a studded, black clad, infinitely more dangerous and thrilling tea cup ride! The frantic layers of guitars and bass all clamouring for attention in the opening of ‘Earthbound’, the eponymous track from Bury Tomorrow’s latest album reflected the similarly anarchic state of the crowd, as the set raced at breakneck speed towards its climactic ending, with frontman Daniel Winter-Bates’ clean vocals in the opening of the final chorus showing his prowess as a genuine vocalist as well as a screamer, and as a genuine person, as despite his impassioned calls for circle pits, walls of death and mosh pits ringing out across the square almost non-stop whenever he had a second to catch a breath, the end of every song showed a very different, very human side to the frontman, as he thanked the crowd generously for their enthusiasm and the electric atmosphere that was now crackling all around the square.

Grinning emphatically out across the packed square as Bury Tomorrow’s whirlwind of a set came to a close, it was this incredibly human side of Daniel who perfectly summed up the gravity of what we had all just witnessed when, after thanking fans profusely for turning out, he emphasised the moment, marvelling at how as a metal band whom most would find a challenge to listen to (to put it mildly!), they were able to play a huge show in the middle of Leeds City Centre, championing Slam Dunk festival as the best kind of celebration of metal and hardcore music which allows the genre to remain alive and kicking. And if the heady cocktail of emotions and adrenaline that was still running through my veins long after the set had finished despite not being the world’s biggest metal music lover is anything to go by, the importance of the preservation of metal and hardcore music cannot be overstated. Bury Tomorrow was a thrill like nothing else, and regardless if you are a fan of metal music or not, is a live music experience not to be missed!

The band are scheduled to play Resurrection Fest in Spain on July 8th, and will also embark on several European dates throughout August.