Stick To Your Guns Have Released A New Song 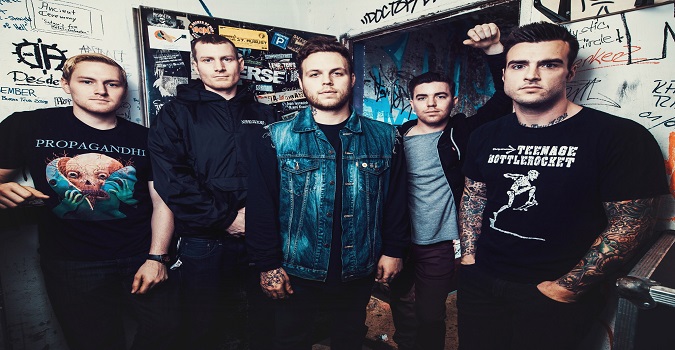 After the announcement yesterday that Stick To Your Guns have joined the Pure Noise Family, they released a new song on that day.
This was not planned, but as the world is currently in the grip of the police brutality that happened to two young black men, Jesse Barnett and the band thought this would be a perfect timing to release the song anyway.

Here's what Jesse Barnett had to say about the new track 'Universal Language':
​
"We weren't going to release this song until a later date but we decided that this would be a perfect time with what's happening right now in America that has everyone's attention.
Let me first start off by saying I have been known to say a lot of harsh and disagreeable things about Police. A lot of what I say about them is emotional but none the less it's what I think. I come from a family of military people and I have family in the San Antonio Police Department, and yes I still mean the things I say. I have a firm distrust and dislike for anyone who takes a role of authority or superiority over another life. It has been proven historically, socially, and scientifically that people with such strong positions of power WILL abuse them. However, this does not mean I wish harm or death upon ANYONE.
There is a problem in our country with how people in black and other communities of color are treated by law enforcement. As a white kid it is impossible for me to relate to this. Sure, I can spend all day imagining what it may be like, but the bottom line is I have not been met with even an ounce of the violence or hate that these communities have become accustomed to. I am a privileged individual and I won't be guilty of it anymore. I will recognize my privilege and I will use it to stand against these obvious injustices that take place everyday.
This song is for Alton Sterling. This song is for Philando Castile. This song is for the individuals who were killed in Dallas. This song is for the 215 people who lost their lives in Baghdad on July 3rd. This song is for the people of Oaxaca, Mexico. This song is for the world who only communicates with violence and to those who only open their mouth when things get bloody. There is a better way and I am confident we will get there some day."
- Jesse Barnett