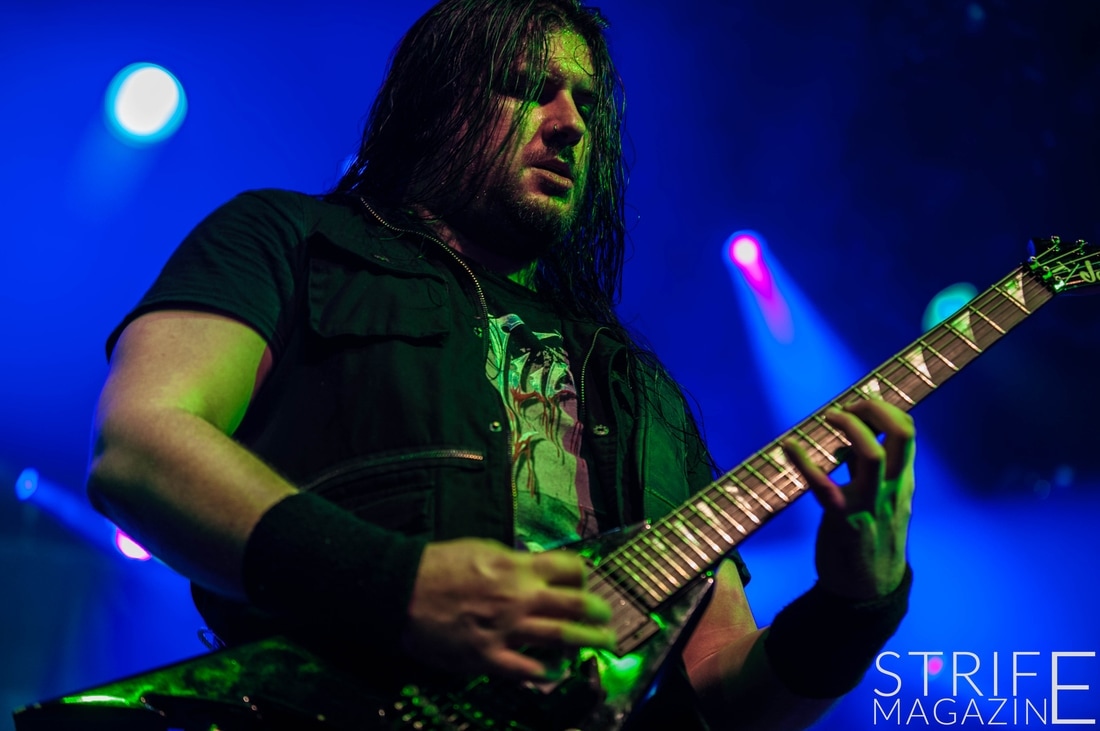 Since February of this year, metal veterans Trivium have been on the road all across the UK and Europe, supported by SHVPES and SikTh. And not only did we get the chance to witness this awesome tour line-up at a show ourselves, we even had the opportunity to have a chat with their guitarist Corey Beaulieu.
Together we looked back on almost two decades of Trivium history and discussed subjects such as the band’s personal inspirations, the right way to deal with anniversaries and the struggles coming with new changes and developments in the music scene.  You can read the entirety of our chat below!

How did you end up touring with SikTh and SHVPES?
With every tour we talk with booking agents and our management about bands who are available and who could be cool as opening acts. We thought SHVPES is definitely a cool up-and-coming band and we’ve been friends with the singer Griffin (Dickinson) for a number of years. It’s always cool to bring out people you know. SikTh are a band we’ve known about for a long time and they just started back up again after being apart for a while, so we just thought it would be a cool package of different kinds of bands.

Which aspects did your new drummer (Alex Bent) bring into the band?
Well, he can play all our songs (laughs). That’s something that’s lacked in the past, being able to play all the songs from the catalogue because there’s a lot of variety in the drumming. He’s definitely able to play everything, he can play it all live perfectly, plus he’s a cool dude. He’s doing the tour and then once we’re done, we’ll see how things go in the future. Right now he’s committed to doing this tour and so far nothing beyond that, but we’ll see what happens.

You guys stated that you’ll start working on a new album this year. Has that process started yet or is it going to after this tour?
Once we’re done with the tour, we’ll take a break and then see when we feel like starting. Throughout promoting a record we’re always writing stuff, so it’s not like we don’t have any ideas, it’s just that we’re touring and afterwards we’ll get into album mode. We don’t really like to talk about anything new until there’s actually something concrete happening or has been done. There’s nothing really going on at the moment just yet.

Since you have so many albums to choose from, how do you determine what’s going to be on the setlist for each tour?
Just kind of whatever we feel like playing. There’s definitely an amount of songs that are the “mandatory” hits that people always expect. The rest is just whatever we want to play and also some stuff people wouldn’t expect and then we rotate songs around from tour to tour. In the UK and Europe, we have a lot of fans that come to every show on every tour so we don’t like to play the same stuff all the time. There’s always songs that we haven’t played in years that will pop up on the setlist. We’re just trying to keep it fun and interesting and surprise some people.

As your band has been around for almost two decades now (which is absolutely insane), do you have any advice for bands that are just at the beginning of their musical journey?
Expect a lot of work (laughs). Try to have the sound and the songs that will set you apart from all the other bands trying to do the same thing. There’s definitely a ton of bands nowadays that are able to make recordings and stuff with technology and the internet, so there’s a lot more stuff you have to fight against to get noticed, because people at labels get bombarded with a million demos all the time. So work on your songs, try to find something unique about your band and don’t try to sound exactly like a band you are a fan of. Somebody is already doing exactly that so you have to take your influences and put them all together in order to make something that’s different and as fresh-sounding as you could possibly be nowadays. After that you just have to put in a lot of work with promoting and playing shows. Being a good live band is definitely a key part of helping your band grow.

Speaking of live shows, are there any artists whose live shows really inspire yours?
Growing up a music fan, I’ve always liked bands that are very active on stage, like the old Metallica shows, all the head banging, moving around and giving people something to look at. I’ve never been a fan of bands who, as we call them, are wearing “concrete shoes” They just stand in one spot and stare at the floor while playing. And you can play everything perfectly, but at a live show, people want to see something to go with the music. That’s why I’ve always liked bands that are very interactive with the crowd and showing that they’re actually putting in an effort to give you a show, like all the thrash bands. To this day, I’ve always loved watching Iron Maiden shows. Bands like that, who always have a lot of energy to go along with the music, they have something physical which is always cool to see.

Recently, you have released a deluxe edition of your debut album. How did you come up with that?
That would be a good question for Matt (Heafy, guitarist/vocalist) since Paolo (Gregoletto, bassist) and I weren’t on that record. Matt owns that record from the original record deal, so that was pretty much a project he put together. The debut record “Ember to Inferno” hasn’t been on the market for quite some time, so it was just getting that out there and then also putting together some cool packaging. For example, the record was never released on vinyl before, so it’s cool to get stuff that that record has never gotten before. And putting that record back out, it was also really cool to put out all the demos and unreleased stuff, kind of showing you the developing years to get to that point. We’ve been asked about that record for years and we play stuff live from it, but that record hasn’t been available for fans for the past three or four years, so now our newer fans can discover a record from our past that will be new to them.

There’s been a rise of the alternative genre and music scene over the past few years. What is your opinion on it gaining more interest and attention again?
It’s good for us, and for other bands that there are more people interested in this kind of music. We’ve played a lot of festivals and stuff and sometimes we were almost the only metal band along all of the pop stuff, so it’s definitely interesting. There’s definitely a lot of cross-over between genres and hopefully with stuff like Spotify, where for one simple price per month you can pretty much dive into any kind of music, people will go and check out more music. You don’t need to go and spend loads of money on CDs to see if you’re interested, you can just listen to whatever you want to check out. So hopefully more people will start to cross boundaries and just enjoy music of all types. It’s cool to just support the arts, with people who play music, just check it out and come to a show!

Going back to your debut album, which, in its original form, will turn fifteen next year. Do you guys have anything planned for that?
No, we’ve never really done any album celebration in form of shows and stuff. The only thing we’ve ever done was two years ago when our album “Ascendancy” turned ten. The day it came out, we just did a little thing on our website and came up with an “Ascendancy” shirt and that was about it. A lot of bands do anniversary tours where they play the whole record, but I don’t think ten or fifteen years is that much. You know, if people still give a fuck after 20 or 25 years, that’s worth celebrating, but this is still pretty new and we’re always trying to bring in new albums and focus on moving forward rather than just spending a whole tour playing one record, when people want to hear all the records. Maybe one day, we’ll just do one anniversary show for a record and if people want to see it, they’ll have to fucking travel (laughs). So yeah, we’ll mark it on the calendar and the day it turns fifteen, we’ll make a post and that will probably be it.

You’ve been around for a while and have a fan base consisting of a few generations. How do you feel about this and how do you find a way to create music that appeals to all these generations of fans?
When we first started off, we’ve heard people say a million times that “Ascendancy” was their first metal record they ever bought or heard, so we definitely have the young generation where we were their first band in the way Metallica was for all of us. Then, if you take all our original influences, that’s probably what some of our “older” fans have been into when they were kids. So our influences, that we took and mashed with a bunch of other stuff, created a sound that could appeal to an old school metal fan that grew up in the 80s and then we also have a modern sound that’s a thing for the kids. I think if you’re a metalhead, you don’t really get older and just stop listening and then all the European festivals have a wide range of kids to older fans who enjoy different types of metal. The longer you stick around as a band, the more you have to find those new fans to bring them into your sound and keep growing your fan base. You definitely want to make new fans instead of losing them all the time (laughs).

What have been the most valuable lessons you’ve learned along the way?
We do what we want to do and we do it on our own terms. We don’t let anyone dictate what kind of records we make or what kind of tours we do or who to play with. Just stick to your guns. Making music, your name is on it forever so you want to make sure you’re proud to do exactly what you want to do. So one life lesson is, you don’t want to be pushed around or forced into doing something you’re not comfortable with.

Which bands (that are currently active) would you recommend?
Definitely SHVPES. They’re a new band and their new record just came out. They’ve got their own kind of thing going on, which is pretty cool. And then there’s a lot of bands who’ve been around for a while and just put out new records that are good. The new Overkill record is pretty good and the new Kreator. There’s this Finnish death metal band, Mors Principium Est, their new record is really, really good.

Is there anything you want to say to your fans?
There’s not really too much going on besides the tour, so hopefully you came out to the tour and saw us play somewhere. Other than that, just stay tuned on all the usual suspects of social media for updates later in the year, when we have something to show or talk about!