Sulfite and the remedy against years of skin rash

As a child, I had a rash in every skin fold. In the seventies, a little baby powder was used to relieve the worst suffering. People didn't know any better. Sometimes I had allergic reactions that could make life very unpleasant, but most of the time this was over after a few days. 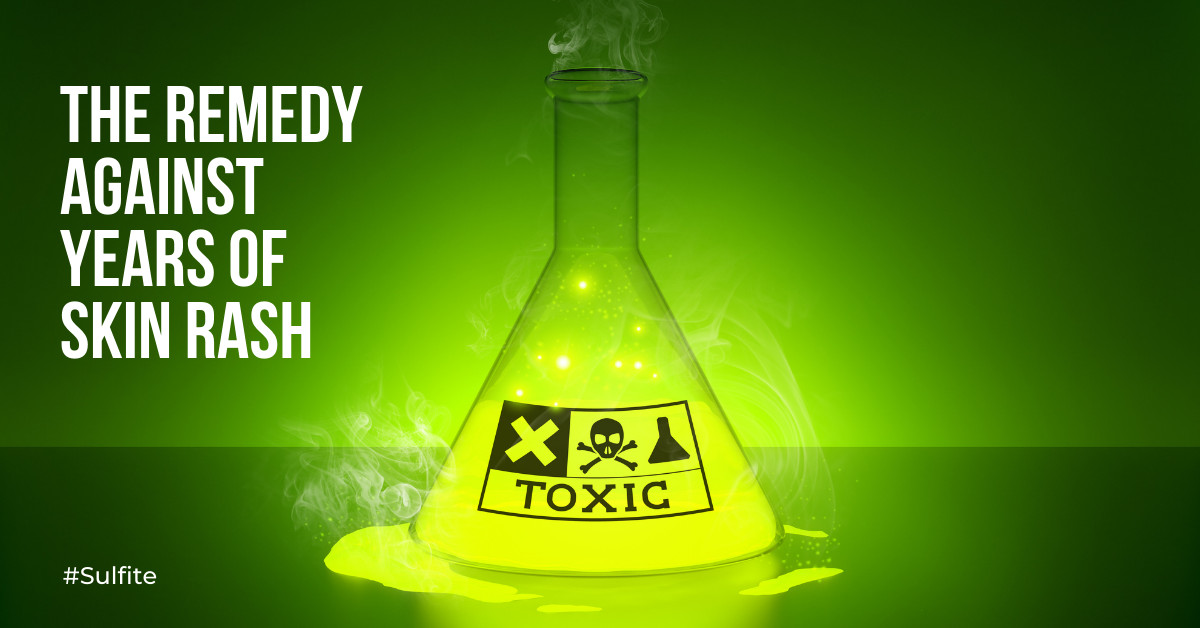 When I was prescribed the hormone cream Diprosone at the end of the '80s, my rash was finally okay to live with. Sometimes I preventively smeared my armpits and groin and when I had an allergic reaction, the hormone ointment prevented me from having to walk around with it for days.

Some doctors or pharmacists may have known that by using hormone cream I also destroyed my adrenal cortex. I didn't know, but even if I had, I would have continued to lubricate.

I felt healthy and fit, did a lot of sports and even though I smoked and drank, there was no lack of vitality. Until one day when I was in my early twenties, I also got a rash on my face.

The red spots gave an unhealthy impression and it looked like I had drunk too much the day before. Sometimes this was also the case, but I couldn't make a connection. The spots could also occur if I hadn't drunk for days or weeks.

The rash went from bad to worse

Until I was 35 years old I was able to control my rash with the help of many tubes of Diprosone. I noticed that if I stayed in Thailand for several weeks, the rash disappeared almost completely and attributed this to the weather and the salty water.

The only annoying thing was that my scalp also started to itch from the red rash, but with the help of a liquid hormone lotion, I was able to suppress this as well.

One day around the age of forty, my eyelids started itching, and rubbing them made my eyes red. This caused a slight panic because at the same time my vision started to deteriorate. The itching was manageable. After 40 years I had been trained in this, but the diminished vision was a nightmare for me.

The ophthalmologist came with good and bad news. The good news was that my eyes were basically okay and didn't suffer from my condition. However, I should slowly start thinking about reading glasses, because at my age it's normal for your eyes to deteriorate a bit.

The bad news was that my eyelids were chronically inflamed and that nothing could help against that. Antibiotics would relieve the itching and maybe temporarily fix the problem, but not solve it.

So now I was stuck with a hormone ointment, a hormone lotion, and a regular course of antibiotics for my eyelids.

The dermatologist did not offer a solution for my allergy

All these years I had been to different dermatologists several times. Again and again, the answer was that I had to learn to live with it. The question of whether the prolonged and frequent use of the hormone ointment was not a problem was answered in the negative. It could not hurt that much.

Over the years the allergic attacks got worse and the rash spread to other places on my body. Nipples, shins, ears, and forehead. Nothing was spared and no matter how often I smeared cream, it kept coming back and getting worse.

The homeopathic doctor did not know the answer, the spiritual therapist did not know the cause and slowly I was at my wit's end. The only thing I hadn't done yet was an allergy test, but even that didn't bring me much more than I already knew.

An allergy to horses, dust mites, and some dogs and cats showed from the results. But in my belief that was not the cause and certainly did not offer a solution.

Could I have a food allergy?

Of course, I am often pointed out to have a gluten allergy. The symptoms I had were similar, but by ruling out prolonged types of food I could say with great certainty that this was not the cause.

Stress, alcohol, and smoking have also often been mentioned as possible causes. Again, I could assure myself that it might not contribute to healing, but certainly is not the cause itself.

The ENT doctor once said about my chronically clogged nose that this could be caused by smoking, but I felt throughout my body that this was not the primary cause.

I finally found out that I reacted strongly to chemical food. As a licorice lover, I got more and more licorice, and actually with everything you see and taste that it was chemical I got allergy attacks.

Immediately after a takeaway meal with flavorings, I couldn't sleep the same night because of the itching and I got up the next morning with heavily inflamed eyes. So I had to watch out with certain E-numbers, but which ones?

One day I made stew pears in red wine. Leave to simmer for hours until the wine is completely withdrawn and at the bottom of the pan only a deep red sauce remained. I also made a stew with red wine sauce. After a nice evening and delicious food, I couldn't get to sleep that night.

The next day I felt lousy, had rashes everywhere like never before, and was barely able to work. Let alone exercising or doing any other activity.

Headaches and migraines did not bother me, but the rest of the list looked very familiar to me. Hives and the eczematous rash was what I was born with, but I also regularly suffered from angioedema.

I describe this myself as suddenly appearing large and painful pimples in places like the armpit and groin. I just thought I just had bad and difficult skin, but maybe it was part of my bigger problem.

Joint pains & joint swelling never bothered me either, but digestive problems & nausea was something I had to deal with on a weekly basis. Just like stomach aches and low stomach problems.

And shortness of breath was also far from strange to me. One day more than the other, but I blame that on the fact that I was smoking. Could there be one thing that causes all this?

YES, it could, and in my case, it certainly could. Sulfite was my kryptonite. Sulfite is what I've been tormenting myself with for 47 years, inside and out.

The day I found out that Sulfite causes my (skin)problems.

Sulfite is found in a lot of food and also in (red) wine. People with a Sulfite intolerance often can't tolerate garlic, chives, sugar, crustaceans, and much more. See the list below. But Sulfite is also often used in takeaway dishes, microwave dishes, sweets, and potato products such as potato chips.

I looked at the whole list and for the first time, I got a moment of recognition. These were exactly the products I got a little bit bothered by while eating. I never thought it could be because of Sulfite, but that had to be the cause!

This is the list of products that contain Sulfite

People with Sulfite intolerance react more or less to the following E numbers:

The solution for a Sulfite Inolerance

Because intolerance is something other than an allergy, most traditional medical practitioners can't detect it, or only with difficulty. The only way is to try to ban Sulfite completely from your eating and drinking patterns and see if you're going to feel better.

That's exactly what I did and it took just two more days or my skin started to look visibly better. I also started to feel much better and even the irritation of my eyelids became visibly less.

After those two days, I slowly started trying products from the list. A bit of garlic and a bit of sugar didn't seem to hurt. But a piece of fish with sauce at the fish store gave an extra-strong reaction.

It turned out that people with a Sulfite intolerance don't react equally or equally strongly to everything. Beer causes almost no reaction and cookies and crackers cause a very strong reaction.

I'll probably stay busy for years to find out what I can and can't eat or drink. Because this can also change over time. But one thing I know for sure. Now that I don't eat the things I'm hypersensitive to anymore, my life has finally become a lot more bearable.

Note: I am not a doctor and the above information is based on my own findings. There is no scientific research underlying this. Always consult a professional such as a dietician or nutritionist if you have any questions about allergies or intolerance.