Is one person luckier than the other?

Everybody knows people around him where everything seems to be against them. In the same way, we also know people where luck always comes their way. Is it true that one person is luckier than the other? Or is that something we make up? 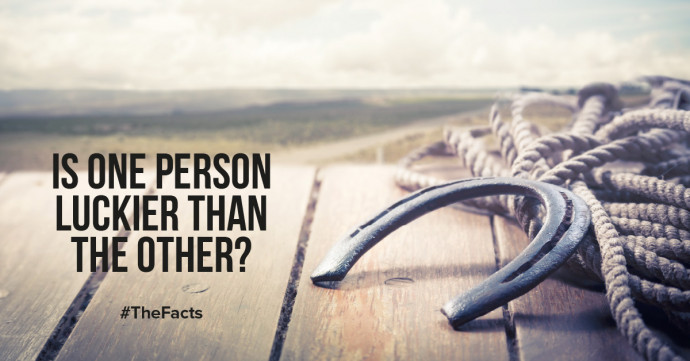 Anecdote: Old poor man with - little - luck
An old poor man's only possession was a beautiful silver-white horse. His fellow villagers thought he should sell his horse so he could at least buy food, but he refused.

One night the horse ran from his stable and the whole neighborhood spoke to him about how stupid he had been. Now he had nothing at all. A bigger accident could not have hit him.

The old poor man reacted calmly and said: "Who knows if it is a luck or misfortune? All I know is that my horse is gone."

A few weeks later, out of nowhere, his horse comes running in with 12 other wild horses. Suddenly the old one had a whole herd instead of 1 horse.

Of course, this was the talk of the day in the village, and everyone congratulated the poor man with his suddenly accumulated wealth.

The old poor man reacted calmly and said: "Who knows if it is a luck or misfortune? All I know is that I now own 13 horses."

One day, his son tried to tame one of the wild horses and fell off the horse. During his fall, he shattered his leg.

Again, the fellow villagers talked about a terrible accident for the old poor man. Now he had horses, but also a permanently disabled son.

The old poor man reacted calmly and said: "Who knows if it is a luck or misfortune? All I know is that my son shattered his leg."

Shortly afterward a war broke out and all healthy men had to go to the front. His disabled son did not have to come along, and none of the other young men from the village returned alive.

What do you think the villagers told each other?

Is there such a thing as luck?

If you care a lot about money and possessions, it will be a disaster to lose them. If you care more about friends and family, then you don't want to lose them for the rest of your life. What is luck, and what role does what we find important in having luck play?

We can only mourn and feel lucky for something we really care about. Something we make very important. When something happens to us that we are indifferent to, we rarely speak of being lucky or unlucky.

Do we have any influence on what happens to us?

When people were still strictly religious, life was relatively simple. God - or the gods you believed in - determined and cared for everything, and as long as you lived by the rules of your religion, you could go to heaven.

If despite your obedience, something terrible happened to you, God - or the gods - had a reason that we humans would not understand. If all went well with you, then apparently you were living by the rules of God or the gods, and it was thanks to them.

Everything good and bad came from God - or the gods - for a reason. You didn't influence that. The only responsibility you had was to live according to religious rules. Fortunately, this changed later in the sixteenth century.

Does coincidence exist or is everything predestined?

Scientists like Isaac Newton, who lived in the sixteenth century, discovered that nothing, or almost nothing, had to do with God or coincidences, but could be explained scientifically and predicted.

This new movement of scientists and physicists saw the world as a very complex clockwork with a large number of cogs. It was the beginning of the philosophical concept called determinism. Within this philosophy, coincidence does not exist, and one or more causes can be identified for each consequence.

Is the world a collection of randomness or entirely predictable?

In the sixties of the last century, the meteorologist Lorenz came up with a new variant of determinism. He invented the chaos theory. According to him, the weather was not a linear accumulation of causes and effects, making it not easy to predict.

Because of the complexity of factors, we cannot make accurate predictions, but each factor in itself can be explained scientifically and physically. According to chaos theory, we do not live in an arbitrary collection of circumstances, but we still lack the knowledge and insight to explain and predict everything.

An example of the chaos theory

If you put one white and ten colored balls on a billiard table and tell a computer exactly how you will hit the white ball with the cue, it can predict exactly what will happen on the table. However, if suddenly a fly lands on the table that sits precisely in front of the white ball, the prediction will no longer be accurate.

This so-called parameter must then first be included in the algorithm of the computer. So, as the chaos theory describes it, it is not that we cannot predict everything, but we currently lack the knowledge to specify the variable parameters.

Does Karma influence our luck for misfortune?

The word Karma comes from Sanskrit and literally means "action" or "doing". Over the years, the word Karma has taken on an almost mystical meaning in the West, which has led to its being used in many ways.

It is partly due to the sixties where the Beatles came back from India, and many young fans wanted to make the same journey. After a few weeks in India, Tibet, or other Asian countries, they thought they had fully understood the concept of Karma and wrote books full of how they thought Karma works. However, the truth is much more complicated.

In all simplicity, Karma was often described as a direct or indirect consequence of one or more actions you have taken. You steal money, and a little later, you yourself are robbed. You give money to a homeless person and suddenly discover that you have won money in the lottery. Luck and misfortune are directly linked to the actions you have taken by this too short-sighted statement of Karma.

The British-Tibetan Buddhist monk Lama Jampa teaches us that you cannot simply link one or more past actions to a specific outcome or result. Nor can you predict that someone who "lives well" in one life will only have luck and prosperity in the other.

According to Lama Jampa, all our assumptions about Karma in relation to a direct cause and effect are incorrect. That's because of the complexity, no one but Buddha himself can say anything sensible about it.

Conclusion on luck and misfortune

It has never been scientifically proven that one person is luckier than another. However, it is scientifically proven that one person has been robbed more often than another. But whether the other person has been cheated more often or has experienced other unpleasant things cannot be said. Having a lot of luck or bad luck is relative and depends on what you find important or very annoying.