The difference between givers and takers 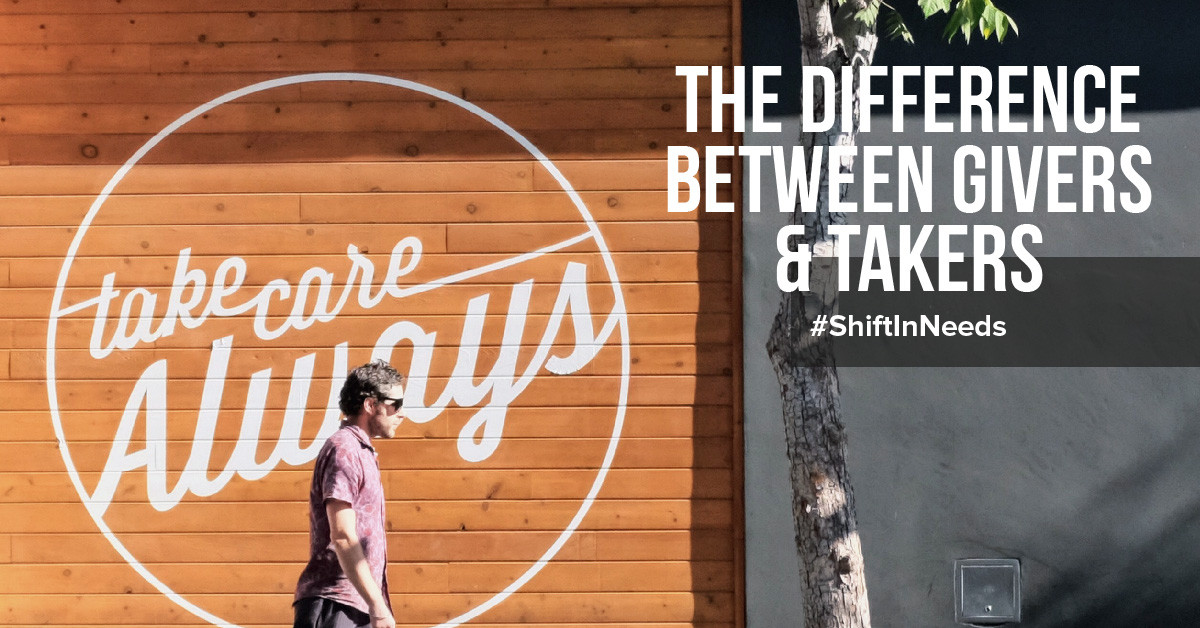 Characteristics of an extreme taker

You can recognize takers early in their youth. He is the first to run to the tricycle and wants to be the first to play with the toy of his playmate. The first signs of "I first" come to the foreground and without parental adjustment, this behavior can lead to a real taker attitude.

Takers first think of themselves

For selfish reasons, in extreme cases, they may find it entirely legitimate for burglarising, to take things with them, and not even to think about the injustice and suffering they inflict on someone else. Beyond reason, they believe they can take what they think they're entitled to.

You can recognize takers by one or more of the following core values and beliefs.

Characteristics of an extreme giver

Typical givers can be mistakenly seen as shy. It is often not the motive that causes their actions. Givers have a deep-rooted awareness that we have to do it together in this world and that we are all equal as human beings. No one deserves more than anyone else, and we have to care for other people, nature, and ourselves.

Givers think of others first.

Givers tend to have more differences in social motives for their goals and actions. It could turn the behavior into submissive and self-defeating behavior. As if you as an individual do not matter (anymore) on this earth and all other people are more important.

Healthy givers are the people who always are there for others. For example, by offering a listening ear, or by putting an arm around you when you are having a hard time. They make time to contribute to the community and will try not to harm anyone or anything.

You recognize donors by one or more of the following core values and beliefs.

What are the best entrepreneurs? Givers or takers?

In the short term, the taker has an advantage. Without taking into account (feelings of) others, he will be tempted to enrich himself and go for his own profit. This tactic can quickly lead to a flourishing business, but gradually also causes many enemies.

Through antisocial behavior, some people and businesses will start to avoid the taker. It does not necessarily have to be a disadvantage, but in the long run, it certainly does not bring any benefits.

The image of a "successful" company of a buyer will be something in the direction of "smart". But the binding and favorable factor of customers, employees, and suppliers are low and that never works to the advantage of the entrepreneur. If things get a little worse, the (social) safety net will be small or completely gone.

The start-up of a company that is managed by a giver can sometimes be more difficult due to the obstruction of the takers around him. Slowly he will generally get rid of these people and walk his own path.

The giver has a high likability because of all the kind deeds and words. He will benefit from the favor factor of his environment and will have to play the business game much less hard than the taker. Favorable terms of delivery, excellent deals, and loyal employees come naturally in the long run.

The image of a "successful" company of a giver is usually about social, ethical, reliable, and stable.

As a company grows more significant, and the founder loses more power, the typical giver or taker character often becomes less. The mix of these two types of people within the management gives more counterweight to one side or the other. However, the origin in terms of company style can often be traced back.

In the list of the most successful and wealthy companies, almost all of them show takers as founders, and that's how they still act. Think, for example of:

They are companies that were all founded last century and before the significant rise of the Internet. It was a time when the positive image of a company was subordinate to its products and services. Because of the monopoly position and the immense wealth that has been built up, it has so far proved difficult for the entrepreneurs who were set up by givers to knock these companies off the throne.

Nevertheless, there is an increase in the number of companies set up by givers. Think, for example, of:

Shift in the needs of consumers and employees

There is an apparent shift in the needs of consumers and employees. When looking for a new job, the core value "positive impact on society" has risen to number 6. Globally, on average, more than 50% of consumers are willing to pay a little more for a product that does not harm nature.

These figures, which can be read in this infographic, indicate that companies with a giver character and image will slowly gain dominance. Consumers and potential employees will demand and reward this behavior through their loyalty and purchasing behavior.

Conclusion on difference givers and takers

It is most likely that takers will still be the first to cross the finishing line in the short term. And typical taker companies will continue to dominate the market for a while. The trends in demand for giver companies are rising, and there is no longer any denying it. For long term thinkers, it is, therefore, logical to become or stay a giver and gather as many givers as possible around you if you decide to start a business today.