In the era of the publication of the popular book 'men come from Mars' and 'women from Venus' there was a craze for training in which men could discover their feminine side and vice versa. In essence, you could learn to make the most of the qualities that - according to this movement - belong to your gender, and to complete them with the qualities of 'the opposite sex'.

The fact that this movement has grown into a business of millions does not detract from the question of whether the cornerstone of this theory is justified. What turns out, contrary to what many supporters claim, is this:

No scientist has ever been able to prove that the brains of women are or work significantly different from those of men. 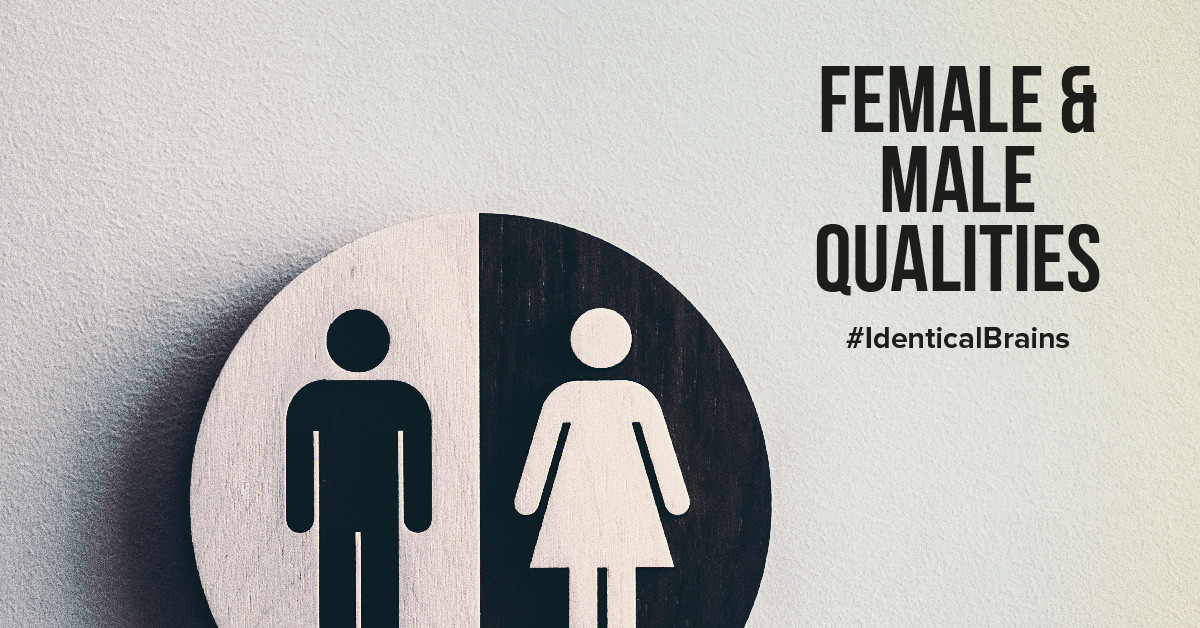 Brains of the man and the woman are almost identical

After years of intensive research, British brain scientist Gina Rippon concludes that we are going to behave according to our education and the culture in which we grow up. The minimal differences between men and women emerge purely as a result of this.

Someone who paints every day and is creative will stimulate a different part of his or her brain more than someone who every day comes up with complicated mathematical solutions. The brains of individuals are not different, but we teach ourselves to use our minds differently. That would argue for the theory that men are different from women, but in a completely different way than was proclaimed until recently.

Myths about differences between male and female brains

Why is this relevant? The limited research in the eighties on the possible differences between men and women's brains has led to the creation of many myths that deceive us. They keep us from the essence to master and make the most of this so-called feminine and masculine qualities.

What are the myths about the differences between female and male brains?

What are the differences between female and male brains?

Almost nothing! If typical differences between female and male are shown, then this occurs in less than 3% of the population, and there is no evidence yet that this affects our behavior or thinking ability. Through education and culture, it can be shown that women have more often developed their social and empathic qualities than men. Also, those men have more often developed their analytical and reasoning qualities. In contrast to speaking about male or female qualities, there is a case in favor of speaking about empathic and analytical qualities.

Achieving goals and the balance between empathic and analytical thinking

We can achieve our goals by using our empathy or by using our analytical skills, but a combination of the two makes us much more effective in business.

When the English entered into negotiations with the Indians in America at the end of 1700 about the purchase and use of land, they initially contacted the chiefs of the tribes. Their negotiations ran aground on two aspects. The first is that a tribal leader has the primary function of an empathic connector among the Indians. A chief ensures that every prominent member of the community can express his opinion, after which the community itself makes a democratic decision.

An Indian chief has no say in the outcome. Negotiating with a chief is, therefore, a complete waste of time. The second reason why the negotiations got aground is that Indians believe that land belongs to no one and that no one can be entitled to it.

A chief of the Indians ensures that everyone is heard and has a say. It is the ultimate form of democracy, but also empathy. The essence of empathy is to take into account everyone's interests, and that is precisely how an Indian tribe achieves its goals. The advantage of this is harmony. The disadvantage is that this is a slow and laborious process and no longer suits the speed of action that seems to belong to our present era.

Achieve goals thanks to analytical ability

We all know someone in our circle who, thanks to fast, adequate, and analytical action, has built up a fortune within the business world. Not more than once has this been done at the expense of his business partners, friends, and often his marriage, but his initial goal has been achieved. Using quick analyses, he outsmarted everyone and was able to take advantage of this. The fact that he did not take the ideas or feelings of others into account in any way did not prevent him from doing so. The goal is, above all other things.

Our brains and thinking patterns are incredibly flexible. It is necessary to be able to learn things on and off. If our education or cultural background has taught us to be very empathic, we may experience emotional difficulties in becoming analytical. It is nothing more than training. We may be tempted to believe that we were born this way and have no other choice, but the science and fundamentals of our existence contradict this.

Just like learning to play the guitar, change requires practice and willpower, and that's exactly where the resistance for change comes from. We only want to learn something when we are intrinsically motivated. Once conditioned to be empathetic, we have so many positive associations with this that we can experience qualities such as analytical ability as negative or inhuman. Put the myth here that women's brains work differently than men's brains on top, and empathic women won't be inclined to become analytical.

Conversely, of course, this also applies to people - mostly men - who have only learned to think and act analytically. They may be inclined to believe that empathic qualities are not their nature and can lead to many adverse side effects. For example, empathy can be seen as soft and far too social, which means that we remain a pattern of analytical thinking and acting. Because we become what we do - what we train ourselves in - and we think and say means that you can learn both qualities.

Within the perfect company, there are ideals. Such as being good for the world, for people and employees, and a long-term healthy profit is made. Customers want to commit themselves to the ideals of the company and become ambassadors of the products or services. Through the empathy of the company, the community feels connected. And through the analytical ability, goals are achieved together but on time. A win-win for everyone in which the man can still be a full man and the woman a real woman.