How was the Dutch Wadden Sea region created?

Thanks to the changing tides, the many currents, and the sometimes inaccessible areas for large ships and cars on the islands, the Wadden area is a natural wilderness of flora and fauna and a popular place for tourists from home and abroad.

It has become a protected area by Unesco, but how did the Wadden Sea area originate and become what it is today? 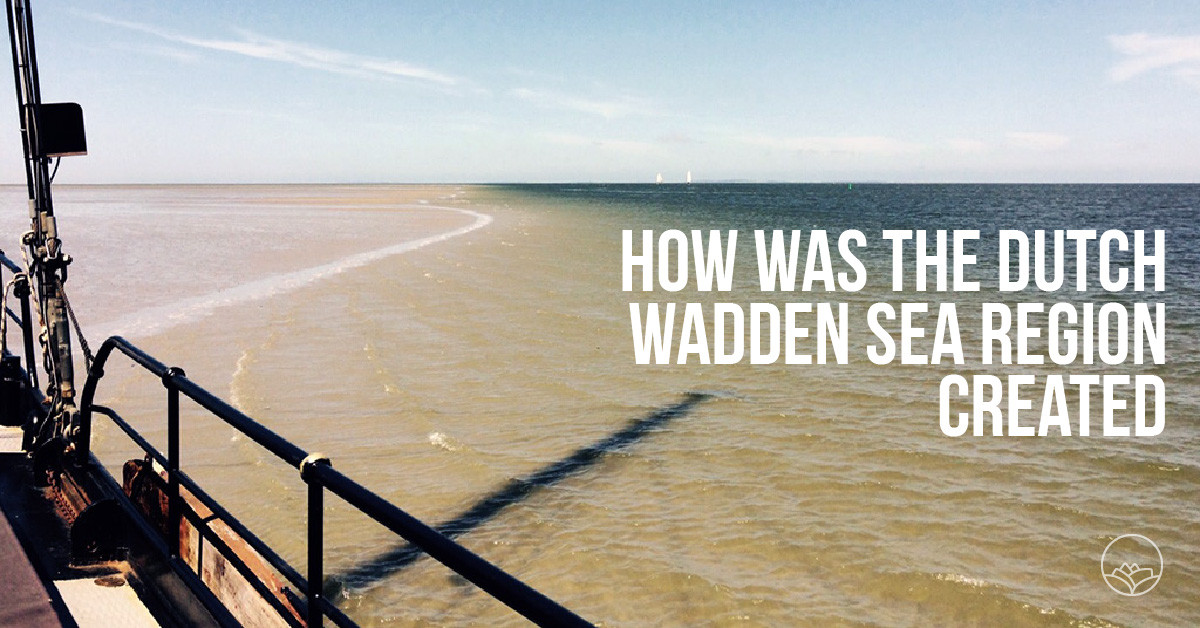 The Wadden area was created by time and people

The Wadden Sea region has not always looked as we know it now, thousands of years have passed and man has also helped. Towards the end of the last ice age, the North Sea was almost completely dry so you could easily walk from the Netherlands to England.

The low sea level was due to the glaciers to the north of the Netherlands that held an enormous amount of water, but about 10,000 years ago it slowly started to melt.

When these glaciers started melting harder and harder, you had to run for your life when you were just on your way to England because the whole North Sea slowly began to fill up again. During this process, different currents were created, creating various sandbanks of silt and sand.

During low tide, the currents created gullies between these sandbanks. These were, in fact, natural dike breaches which made that the Netherlands, Germany, and Denmark became 43 islands richer after thousands of years.

Why is each island different in the Wadden Sea region?

Nature does not allow itself to be forced and does not think in round, square, or symmetry. The natural influences have therefore given each island its own shape and character. The first island Texel was most subject to human influence. Followed by Vlieland and Terschelling.

This has to do with the inhabitants who wanted to protect the habitat from the influences of the North Sea. The North Sea can be very raging at times and can wipe out entire stretches of land in one night. On the other islands, nature has had little resistance and this can be seen in both shape and landscape.

How big is the Wadden Sea area?

The Wadden area stretches from the Dutch naval port of Den Helder to the northern Danish harbor town of Esbjerg. 43 small and larger Wadden islands protect the fixed land borders of the Netherlands, Germany, and Denmark.

In total, this concerns just over 1000 kilometers of coastline, beautifull dunes, and salt marshes. When the weather is clear, you can see every island from the coast, because on average, the Wadden Islands are no more than 15 kilometers into the sea.

How did salt marshes form the Wadden Sea?

Salt marshes are muddy areas that have naturally formed on the Wadden side of the islands and are only flooded at spring tide. After such an exceptional tide, a new layer of mud is left behind each time, making the salt marsh higher and drier, yet it is always through veins of saltwater channels.

This combination ensures that salt marshes are the most important food, rest, and breeding grounds for many species of mudflats and sea birds. Because of the shelter of the salt marsh, flatfish also like to spawn at the edges of this saltwater swamp.

There is also an artificial salt marsh, which we call 'summer polder'. This is made by mankind on the coastline and remains almost dry in summer. By making dams from willow branches, farmers create the same effect as in nature: each time this dam is flooded, a new layer of mud is created, and in this way, land reclamation is done to allow cattle to graze on it in the dry months.

What role did mankind play in the formation of the Wadden Islands?

The Wadden Islands wouldn't look like this or even no longer exist at all if mankind hadn't intervened. Through reclamation and the active construction of dikes, the Dutch have been trying to keep the islands intact for more than 500 years.

This is not a one-time thing, because the islands are not only in danger of being flooded by rising sea levels, they are also in motion themselves. Very slowly but steadily they are walking from West to East. This is because every year, due to the currents, a little sandbank disappears from the West and joins in the East.

The human influence on nature on the Wadden Islands

The Wadden region is rich in special natural reserves. At first, nature itself did its work, but due to the often unconscious destructiveness of people, the Netherlands had to intervene at the end of the 1990s to allow this nature to flourish again.

The warm water temperature and the low water level is an ideal breeding ground for many birds who like to hibernate here. In addition, birds like the endless influx of washed ashore worms and shells. It is as it were an all-inclusive hotel for birds.

Sheep and other livestock also enjoy the nutritious crops and where there are a lot of cattle and birds, other nature flourishes as well. Especially when there are few residents and tourists. The latter became a problem at one point and therefore, in addition to various other measures, a tourist restriction has been put in place.

There are 24,000 inhabitants on the 5 inhabitable islands and the number of sleeping places in hotels and campsites is strictly regulated. However, more than 1.4 million people still come to one of the Wadden Islands every year for one or more days. The many sailing races around the Wadden Islands alone attract tens of thousands of visitors. Fortunately, they cause relatively little damage.

The influence of fishing on the Wadden Islands

Until the end of the 20th century, there was still plenty of fishing on the Wadden Sea. This commercial fishing is now forbidden for many fish species, so there is again an influx of different species of fish. Fish that were almost threatened with extinction are now also present in large shoals. The entire underwater ecosystem can slowly recover from decades of looting of this miraculous area.

But beware. Not all fishing was robbed with large nets. Until the end of the 20th century, fishing was mainly for flatfish, smelt, and ray.

What still happens in abundance is fishing by hand or picking up by hand, like fresh mussels. Just as it should be. Eat what you catch and need. In the Wadden Sea, you can also pick up your own cockles and catch mullets.

Unesco's influence on the Wadden Islands

Since 2009 the Wadden Sea area is on the list of protected areas of Unesco. This is not only because the Netherlands is one of the few countries where a Wadden area has arisen. It has more to do with the beauty and unspoiled flora and fauna.

The government, in collaboration with volunteers and residents, is working with all its might and power to allow nature to find its own way again. One of the consequences of this is that the almost extinct seals can once again sunbathe on one of the many sandbanks. A beautiful sight for every animal lover.

The Wadden Sea looks different every day due to tides

What makes the Wadden Sea so special for many is that it looks different every day. Due to low tide, flow and the currents, new sea and air landscapes with different colours and even scents are created every day. When the sea makes way for the dry sandbanks, birds like the spoonbill of land come looking for crabs and worms.

Moments later, these are driven away by rising waters full of a variety of fish such as the Pipefish, the Sea paddle, the Brackish water, grout, and many others who spend their entire lives in the Wadden Sea. Not all birds, however, allow themselves to be driven away by the rising sea and remain stubbornly in search of a tasty snack. This is why these birds are literally called fish thieves.

About the author. Lotus sailing organises sailing trips on the Wadden Sea and the IJsselmeer for singles, friends, family and other groups. If you have any questions about the Wadden Sea or would like to book a sailing trip on one of our antique ships, please contact us.