The Zaanse Schans and the Dutch windmills

Just 20 kilometers from Amsterdam lies the oldest industrial area in Europe. In this area, you will find the Zaanse Schans, where you can experience what life was like in the 18th and 19th centuries. 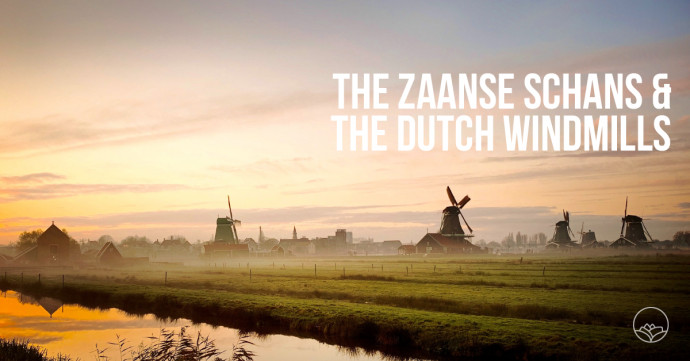 Sawmills, grinding mills, cheese farms, and many other old buildings and crafts are honored here to allow tourists from home and abroad to experience this historical heritage. The Zaanse Schans is one of the top 50 most visited tourist attractions in the Netherlands.

How did the oldest industrial area in Europe emerge?

How the Zaan region became, the oldest industrial area in Europe, is due to a genius Dutch invention. Namely, converting a rotating movement into a diagonal or vertical movement.

Windmills make use of wind and turn around. The Netherlands has been using windmills since 1200, and at its peak around 1900, there were more than 9,000 windmills, which all had different tasks.

The use of gears was already common around 1800, but with them, you could only pump water from the river or grind spices and grain. When the circular movement could be converted into a diagonal and vertical movement, mills could also be used for sawing and weaving cotton. That was the start of the oldest industrial area in Europe in the Zaan region.

Why is the Zaanse Schans so popular in the Netherlands?

Halfway through the 20th century, a start was made to restore all the buildings and crafts from the 18th and 19th centuries to their former glory. Buildings, workshops, and windmills have been put back into use, and tourists are allowed to go in everywhere.

You can imagine yourself 200 years back in time, as it were, and each location has its own story. This has made the Zaanse Schans a popular tourist attraction.

What can you see and experience on the Zaanse Schans?

You can easily wander around the Zaanse Schans for a few hours and enjoy the beautiful nature and authentic windmills and buildings. Many people also come to take great photos.

But what most people from home and abroad come for are the stories of the people who work there. They don't work there as guides but actually do their job. Exactly like they did 200 years ago, and they like to talk about it.

Below are a few examples:

The mill Het Jonge Schaap (The Young Sheep) is a replica of the mill built in 1680 using traditional construction methods. It is a sawmill that still saws wood every day and shows visitors how it was done more than 200 years ago. Wood was brought in over the water and dragged through the saw using wind energy.

Twiskemolen is a replica based on the original building from around 1572. This mill is called a ground sailor because the sails almost touch the ground.

The paint mill called the Cat

Authentic paint is still being made in the paint mill de Kat (the Cat). You can buy paint the way it used to be made, and you can also follow a workshop. Of course, you can follow these painting workshops while using traditional materials.

The spice warehouse and mill with the name Indië's Welvaren

The Netherlands has become rich through the spice trade, and you can smell and taste that when you walk into the warehouse and the mill. To this day, original spices from the east are milled as they used to be. All ground spices can also be tasted and purchased.

Tasting cheese at a real cheesemaker called the Catharina Hoeve

The Netherlands is known for its cheese. At the Catharina Hoeve, employees in traditional costumes still make cheese as it was done in the Middle Ages. When you come in, you can smell the cheese, but if you ask for it, you can also taste it and buy it.

The Zaanse Schans and liqueur at the two-headed Phoenix

Liqueur has been popular since ancient times, but you want to experience the way it tasted at the end of 1800 at the two-headed Phoenix. Employees use the distillery craft from that time to give you a taste of what they tasted back then.

The Zaanse Schans would not be complete without a traditional clog maker who turns a piece of wood into a wooden shoe. Until today farmers in the Netherlands still walk on wooden shoes because it protects against the cold and does not get stuck in the mud.

You can buy a wooden shoe in your own size or see how wooden shoes are traditionally made by hand. Of course, they do use wind energy generated by old Dutch windmills.

The best chocolate is from Verkade at the Zaanse Schans

To make chocolate, you need cocoa. Fortunately, nearby Amsterdam has been the largest cocoa port in the world since the Golden Age. That's why chocolate maker Verkade settled in the Zaan region early on and has now opened a Verkade museum there.

On an authentic sailing boat to the Zaanse Schans

The Netherlands is not only known for its windmill and the Zaanse Schans. Inland and sea ships have brought much fame and prosperity to the Netherlands. These domestic boats are also called the 'brown fleet' because of the brown sails they used and still exist today. Only a few replicas of the traditional overseas sailing ships still exist.

A unique experience on an authentic traditional sailing ship.

The inland fleet consisted of unique ships that had very little draught because the water in the Netherlands is on average 1.5 meters deep. These were called flat-bottomed boats, and fortunately, there are still 300 of them left. Most of them have been fully restored and now sail groups of friends, families, and singles to various destinations such as the Wadden Sea, the IJsselmeer, and of course the Zaanse Schans.

These flat-bottomed boats can offer a fully organized trip through the Zaan region where you can either enjoy the Zaanse Schans from the water or go ashore. The only disadvantage may be that the Dutch skipper will overwhelm you with stories about Dutch sailing history. Ignore or absorb those stories, and you will have the time of your life.