Below you can see the best walking route to discover the whole center of Budapest in one day.

For young and old, a visit to the historic city of Budapest is highly recommended. Especially for the people who love walking. With almost 1.8 million inhabitants, the city is relatively large, but when it comes to tourist attractions and sights, all are easily accessible. At least if you know where you want or need to be. Local residents of Budapest have subscribed to TheONE to help you prepare for a visit to Budapest remotely. It's simple. Find a local Budapest resident, call them via the live video link and ask any question you want. 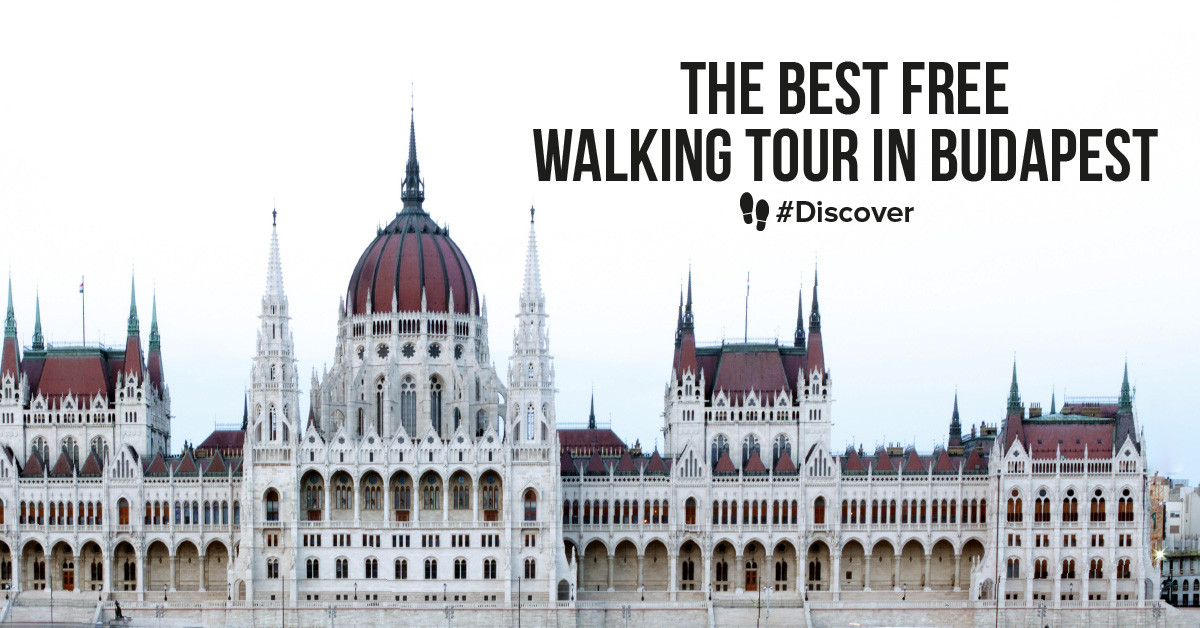 A visit to Budapest is always unique

Budapest consists of the hilly Buda and the complete flat Pest. This fairytale city is the capital of Hungary and very popular to visit as a tourist. The government has been doing everything in its power for years to make the tourists feel entirely at home. Old buildings are being refurbished at a rapid pace, and everywhere there are friendly and cozy squares with eateries.

The infrastructure has also been taken care of in recent years, and in general, you can call Budapest a safe city. Most places are within walking distance, but because of the excellent infrastructure, you can easily take public transport from anywhere.

The most famous sights in Budapest

We propose to start on Vörösmarty Square (Vörösmarty tér). This is the main square of Budapest with the statue of the poet Mihály Vörösmarty (1843-1855). 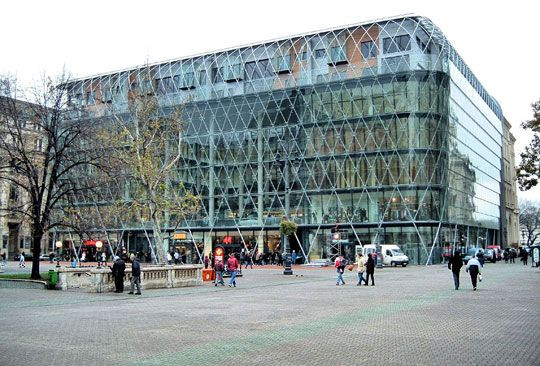 He wrote among others "Cserhalom" (1825) and "The two neighbors" (A Két Szomszédvár) (1831). Vörösmarty wrote his best-known poem in 1836 called "Calling" (Szózat). It has become the second national anthem of Hungary. 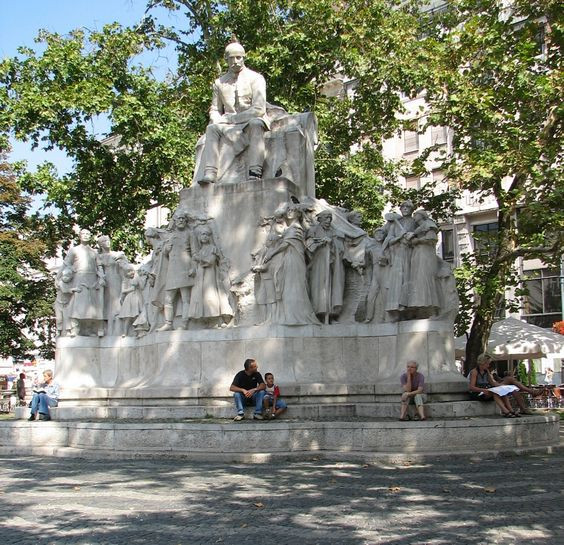 In winter there is always a Christmas market with several market stalls selling mulled wine and souvenirs. 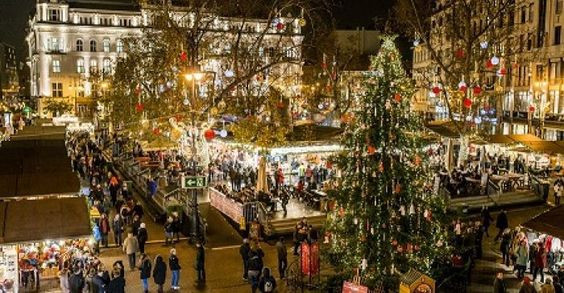 From Vörösmarty you can walk to the Danube.

The Danube in Budapest

As you can see, the Danube divides the higher up Buda from Pest. With more than 2829 kilometers, the Danube is the longest river in Europe. It is the only river in the world that crosses ten countries. The Danube crosses Germany, Austria, Slovakia, Hungary, Croatia, Serbia, Romania, Bulgaria, Moldova, and Ukraine.

On the left you can see the Vigadó concert building that dates from 1859. Beautiful to look at, but some experts think that the acoustics of the building are not optimal. 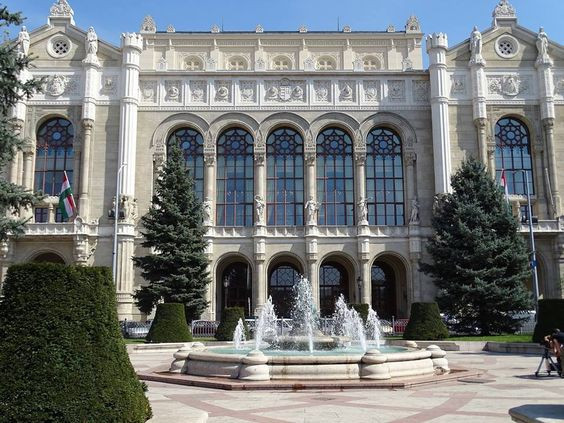 The girl with her dog | Statue

Once at the Danube you see on your left hand the statue "The girl with her dog" that was made by Raffay Dávid. She is sitting on a fountain playing with her dog who has a ball in his mouth. 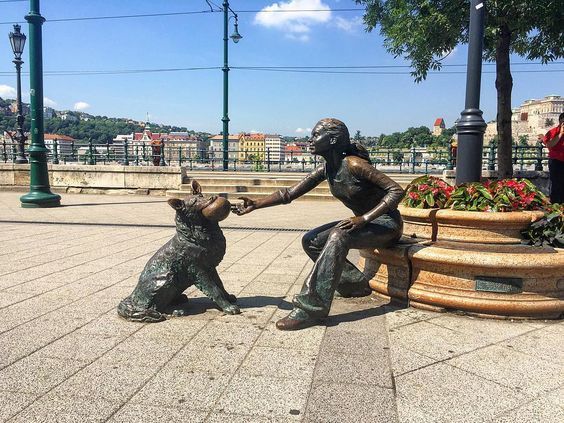 On your right, you'll see "the little princess" (Kiskirálylány) sitting on the railing. This statue was made by László Marton (1925-2008). It was inspired by his daughter. She saw herself as a princess with a crown of newsprint and a robe as a cloak. 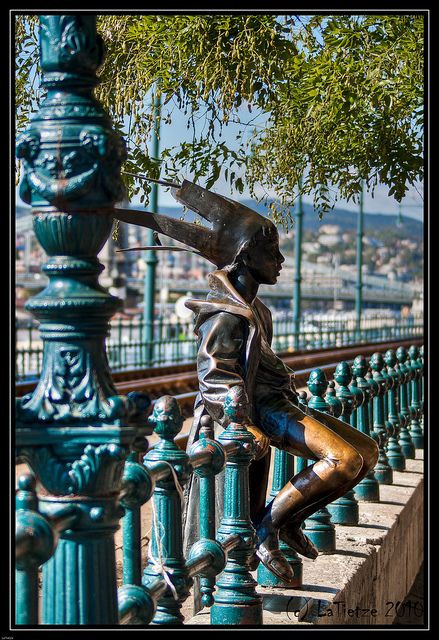 Eating on a boat on the Danube

At this spot on the Danube you will see boats on which you can have lunch or a romantic dinner in the evening. Here you will also find the canal boats that can take you on the Danube for an hour or more.

From "The Little Princess" you walk on to the Chain Bridge (Széchenyi lánchíd).

Széchenyi lánchíd is named after the Count István Széchenyi. His nickname is "The greatest Hungarian" at the time when Hungary and Austria were still one country. It was one of his projects to improve the prosperity of Budapest and Hungary. The bridge is 330 meters long, almost 16 meters wide and built in 1849. Pay special attention to the beautiful lion's heads at the beginning and end of the bridge.

Before you climb the chain bridge, you pass the Stefan Széchenyiplein (Széchenyi István tér). In recent years this has become the neighborhood where the 'beautiful' hotels are located. One of the most beautiful is perhaps the Four Seasons Hotel Gresham Palace. This hotel was restored in 2004 for 110 million Euros and has 179 rooms.

Walk over the bridge past the roundabout to the funicular.

The funicular in Budapest

On Clark Ádám square (Clark Ádám tér) is the funicular railway up to the Castle Palace. You can also walk up, but the funicular gives you a beautiful view over Pest. The funicular is open every day from 07:30 to 22:00 and dates from 1870. It was then the second funicular in Europe.

At the top of the funicular you can take a shortcut and walk to the left towards Buda Castle or a little straight ahead and then turn right towards the Matthias Church.

The Matthias church in Budapest

The Matthias church (Mátyás-templom) was originally founded in 1015, but the present building is from around 1450. King Stephan founded the church and used for many ceremonies. King Mathias celebrated there two weddings, and in 1916 the last Habsburg King Charles IV was married in the Matthias church.

The Fisherman's Bastion in Budapest

Without a doubt, Fisherman's Bastion (Halászbástya) is one of Budapest's most beautiful attractions. The current structure dates from 1902, but the name comes from the Middle Ages. At that time, the fortress walls had to protect the Fishermen's guild. The seven towers symbolize the seven tribes that founded Hungary in 895. Here you have one of the most beautiful views of Pest.

From the Fisherman's Bastion you have a beautiful view of the parliament building. This building is considered to be one of the most beautiful in Europe and dates from 1904. It houses the Hungarian parliament and the parliamentary library that contains about 400,000 books.

Walk back to Buda Castle.

The Castle of Buda in Budapest

The castle - the royal palace - of Buda (Várhegy-Bástya) was built after the invasion of the Mongols in 1241. In 1255 it was King Béla IV who gave the order. He wanted a castle, and he wanted to rebuild the city Pest. It was partly destroyed as a result of the war. It used to be the king's residence, but nowadays it houses two museums. The national gallery and the historical museum.

The National Gallery is Hungary's largest museum and was founded in 1957. There are works of many nineteenth and twentieth-century Hungarian artists who have worked all over Europe.

In the historical museum in Budapest, there is always an exhibition about life in Hungary from Roman times to the present day.

Walk to the Citadel - long-distance (2Km)

The Citadel in Budapest

The Citadel is built on the Gellért hill. After the Hungarian revolution in 1851, the Austrian commander Jacob von Haynau ordered the construction of the citadel. At that time, 60 guns were placed. In 1956, during the invasion of the Russians, it was a strategic place to bombard Pest with grenades and thus force the Hungarians to surrender. Fifteen years earlier the Germans had done the same during World War II.

The Statue of Liberty

A characteristic of Budapest is the Statue of Liberty that stands on top of the Gellért hill. The Russians erected it as a symbol of the victory over the Germans in World War II.

Walk on to the Gellért hill cave.

The Gellért hill cave in Budapest

The Gellért hill cave in Budapest (Gellérthegyi Barlang) is a church in a cave under the Gellért hill. This network of corridors was formerly used as a monastery, but also as a hospital during World War II.

Budapest is also famous for its many bathhouses. One of them is in the current Gellért Hotel. It has a natural spring and is one of the most famous bathhouses in Europe. The bathhouse has been in existence since the Middle Ages, but the current building dates from 1918. Originally it was called Sárosfürdő. It meant a muddy bath and was because mud came up when bathing. Nowadays, this is no longer the case.

Walk over the freedom bridge to the other side of the Danube towards Fővám Square.

The freedom bridge in Budapest

The Freedom Bridge (Szabadság híd) dates from 1896. Before WWII the bridge was called Frans Jozef. After the war, the bridge was renamed the freedom bridge. That's why the bridge carries the Hungarian coat of arms. In 1898 it was the first bridge in Hungary to be crossed by a tram.

The Fővám square in Budapest

The big market hall in Budapest

The big market hall has been declared the most beautiful market hall in the world by CNN. It looks a bit like an old station. The building was designed by Hungarian Samu Pecz who was also involved in the design of the current Matthias Church.

Walk back to Vörösmarty Square via Váci Street.

The Váci Street in Budapest

The Váci street (Váci utca) is the most famous shopping street in Budapest. With plenty of shops, restaurants and beautiful buildings, this street ends at Vörösmarty Square. 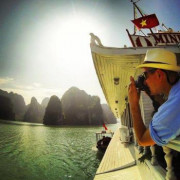