Reasons for closing a business

What are good reasons for closing a business and how to decide to stop? How do you decide and when is the right time to stop? You started your business adventure full of energy and in reality, the preconceived theories don't seem to come true.

More investments in time and money are needed, more stress is involved, and the sales results are disappointing. A common problem for startups but also existing companies. How do you know if you need to change your strategy or close the business altogether?

Depending on the country in question, between 10% and 20% of start-ups do not succeed in the first year. This percentage rises to between 40% and 60% in the first five years. In other words, if you start a business, you have a 50% chance of surviving for five years. 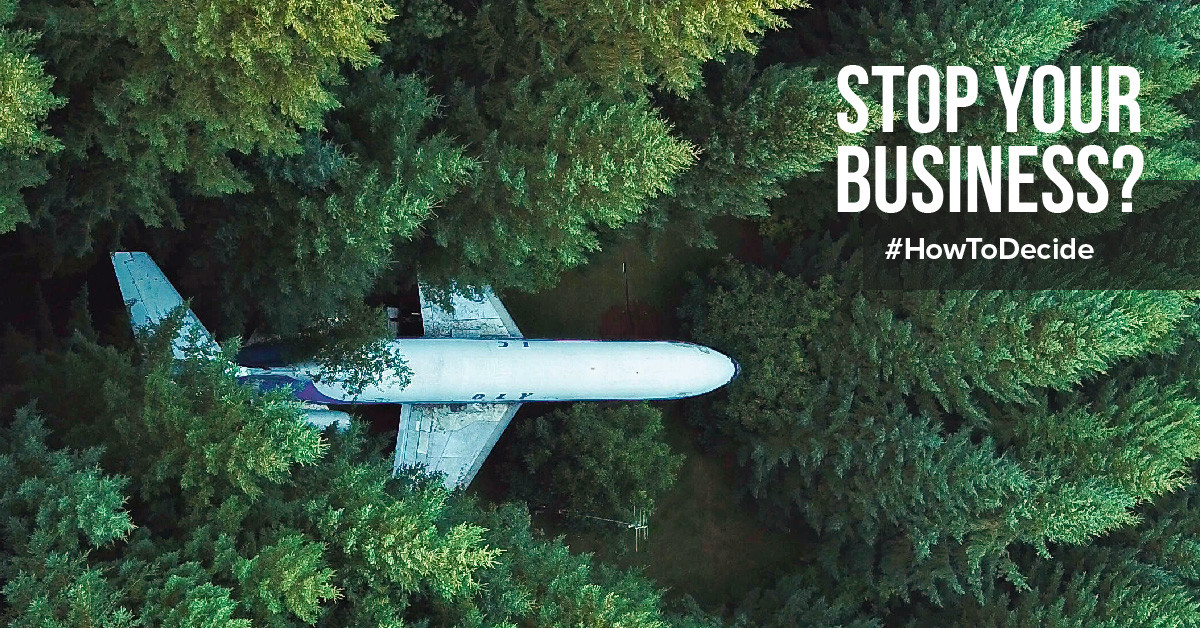 Close your business or continue with the strategy?

It's not always wise to close your business. Research has been done concerning entrepreneurs who went bankrupt. A year after the bankruptcy they were asked if they could have prevented the bankruptcy.

Due to disappointing results or new insights, they had changed the company's strategy in the meantime, and this had ultimately led to their bankruptcy.

80% of entrepreneurs who went bankrupt say afterward that they could have prevented this from happening.

What are the main reasons for bankruptcy?

Rarely does a company go bankrupt because of mismanagement, fraud, or bad luck. Usually, it is due to an overly positive estimation of how quickly a company will make a profit or what the production and market approach will cost in terms of time and money.

The 3 most common reasons for bankruptcy are:

These reasons all have to do with time and therefore, money. Would the entrepreneurs have had more money to invest, they might have been able to get the results they hoped for.

When do you know that you are going down as a company?

It's too easy to think that if more is spent than comes in, you have to close your business. It's normal for a company to get into debt before making a profit. Even when all financial means have been used and the debts can no longer be paid off, a company doesn't have to go bankrupt.

With the help of suppliers or by borrowing extra money from family, friends, or institutions, there is often still a chance that the company can make it.

The bankruptcy of Virgin

Top entrepreneur Richard Branson was once deep into the debts that were financed by a bank. He saw opportunities in the aviation industry and decided to buy his first aircraft in Australia. He did so with money from the bank, which had expressly stated that it did not want to take any risks with an adventure in the aviation industry.

When he returned home, the bank was literally on his doorstep, announcing that the financing would be withdrawn. In the days that followed, the company that we now all know as Virgin was actually technically bankrupt. The chance of finding a new investor or bank was minimal because Branson only had a few days left before the bankruptcy could actually be declared.

Yet he managed to find a new bank willing to finance his adventure within two weeks. But not only that, he got more money than his previous banker wanted to finance and on better terms.

Are debts reasons for closing a business or not?

Some entrepreneurs would never dare to take on the risks that Richard Branson took. There are also entrepreneurs who believe that you have to earn money before you can spend it.

Most entrepreneurs don't find it a problem to take on debts and even find it part of entrepreneurship. There's nothing wrong with building a business without investments and debts. However, it is in most cases that capital is needed. Entrepreneurs who do not want to be indebted rarely grow into large companies like Virgin.

The balance between opportunities and threats for failing companies

If your reserves are at risk and you're (almost) unable to meet your repayment obligations, it's wise to draw up a balance between opportunities and threats. The fact that it does not work now does not mean that there are no opportunities in the future.

The only question is whether you can manage until then and whether the chance of success is plausible. The question is, therefore, what chances there are to become successful. For this, you can ask questions like:

If the opportunities do not outweigh the threats, it is worth considering to cease the business. There should at least be a plausible chance of profitability or equity. If not, you will unnecessarily endanger yourself and possibly also suppliers. After all, if you go bankrupt, you can no longer pay the suppliers.

Why do many entrepreneurs not want to close their company?

Many entrepreneurs have started with nothing but an idea. The certainty of success was smaller in advance than when things were likely to go wrong. A network has been built up, there is more knowledge of the product and the market, and turnover has usually already been made.

It is therefore emotionally difficult to let go of what has been built up. Many entrepreneurs have a positive view of the future and continue to hope for that one idea which will increase turnover and profit. Smart entrepreneurs have this tested by external parties with an independent view on the matter. Entrepreneurs who do not do this, run the risk that they only hope for a miracle, and as we all know, miracles are rare.

What do you do when you know for sure that with more money you can be successful?

Sometimes you can reasonably prove that if there is more money available, you can be successful and profitable. The only thing you need in that case is a provider of capital. If you are sure that you have sold all your assets of value, you can look for investors or a bank.

Most of them get dozens of ideas a day like yours on their desk, and they have to choose who to finance and who not. In the choices they make, the chance of your profitability is just one of the factors that matter.

For example, they also look at the entrepreneur, the diversity of their portfolio, and the amount of money you need. Because the chance is so slight that you (in time) find an investor, you run a high risk. The majority of companies that go bankrupt within five years, face the same problem.

When did you fail as an entrepreneur?

Many entrepreneurs do not want to stop because they feel they have failed. They can no longer look at the guts they had to start the business and only see what did not succeed and make this a personal failure.

Of course, in most cases, this is not true at all, but that is what they have come to believe. Entrepreneurship is not always easy and involves a lot of creativity and responsibility. If it doesn't succeed, the company will have failed, but not the entrepreneur. It turns out that entrepreneurs who try it a second time have 200% more chance of success than the first time.