A discussion I have had for many years with several (former) colleagues is what you will look at first when you hire someone. Is it skill, performance, expertise and professionalism or personality, and social skills? Not more than once have I been surprised that many of them chose how skilled a person is in their profession. Someone should preferably be the best at something, and otherwise, you shouldn't hire the person. 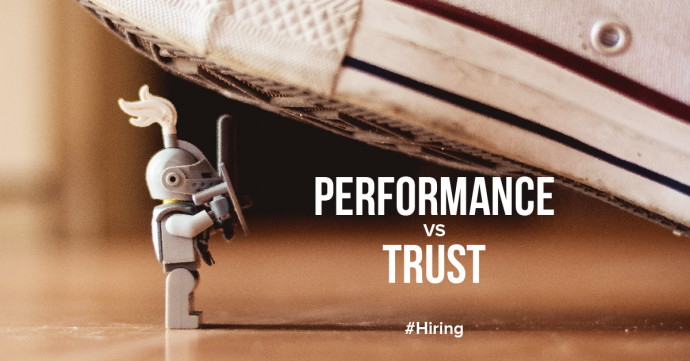 My annoyance about this subject became so great that in 2011 I devoted an entire chapter to it in my book on meaningful entrepreneurship. I am still a supporter of rewarding people primarily for their personality and social skills. Expertise can also be rewarded, but it is subordinate.

This year I received support from a management guru Simon Sinek who is respected by me and millions of others. He travels the world with his speech "performance versus trust". What he has to say can also be found here on YouTube, but actually comes down to the fact that it is primarily about who you are as a human being.

We need a different kind of employee

Times change, and so does the need for the kind of person you hire. We used to have mostly mechanical labor. Assemble the car, build that machine, or draw that logo. You have a skill, and you're good at something. You can do it faster than someone else, so it's worth more money.

When we entered the knowledge economy, the landscape largely changed. It was no longer a question of who could get that engine running the fastest, but who knew the most about it. Knowledge became the new pillar for your market value as an employee. Unfortunately, your education was also immediately linked to this. If you had graduated as a Ph.D. student X, you would have had market value and could ask for a considerable amount per month from the start of your career.

Measuring what we know became the norm when evaluating employees

To make matters worse, HR employees started to try to provide insight into the so-called "output" of an employee. By drawing up KPI's, the knowledge and skills of the employee in relation to the other employees could be measured, and a salary could be determined.

This, of course, took into account familiarisation time, market conditions, working years, and suchlike. But unfortunately, all based on the old mechanical labor industry way of thinking.

In the army, they look at the value of a team member in a different way

If we go back to how Simon Sinek explains it, we learn to understand how the army looks at the value of a team member. He's worked a lot with the Navy Seals. An elite force in which working together to achieve a result under sometimes very threatening circumstances is crucial. He researched how they choose their people who have to be the best of the best.

Nobody wants someone with minimal performance you can't trust. Preferably, everyone wants someone who performs to the maximum and can be trusted beyond bounds.

But what the Navy seals have learned is that someone who sits on the axis of maximum performance but minimal confidence is not ok. That's what they call disease and poison within the team.

If they have to choose, they prefer someone who scores very high on trust, but less on performance.

What Simon Sinek painfully exposes here is that we have an inverse matrix in business. Thanks to all the effort made by HR employees, we can demonstrate what someone is doing with an infinite number of matrices and various KPIs in a seemingly simple way. But there are almost no matrices that reveal the level of trust and what someone contributes to the team.

Sinek goes a step further by making the statement that the business community promotes the adoption and retention of toxic team members through their bonus system and hiring policy. We reward performance without looking at how someone within the team operates as a human being and what that brings in.

People who only perform well or perform above average are very easy to find. There are also a lot of them. Just step into a team and ask who the asshole within the team is... Everyone will give you the same answer. The same goes for when you ask who will always be there for you and also when things get difficult.

These last-mentioned people who are always there for you are the naturally born leaders who create an environment in which everyone can learn, flourish, and excel. An environment in which everyone can grow and make mistakes. They may not be the people who show maximum performance, but they are invaluable to the company that wants to continue to exist in the longer term.

Select the right people and invest in their skills

If you look first at who people are when hiring, you create and maintain a culture in which people can develop and flourish. You can learn almost all the skills you need. Remember that unlearning to be an asshole is much more difficult.

By selecting the right person when hiring and investing in their skills, you develop a united and invincible team. A team that will outperform the performance of the performance-only individual.

Examples from the practice of trust versus performance

At the end of the 90s, I hired a new colleague named Mark for our head office in Amsterdam. His laughter and cheerfulness, natural innocence, and warmth, his enthusiasm, curiosity, and drive were reason enough to make him the linchpin of my company. His job was to keep track of the planning of our advertising agency and ensure that suppliers would deliver on time and at the right price.

With continuously more than 8000 (sub)projects and 120 employees, this was not easy. His challenge was that he had never worked in the advertising industry, knew nothing about printing, and was completely unfamiliar with marketing, communication, and design. Until that time, he had been a boat lessor and part of a small courier company.

Under the protest of the fellow board members, however, he remained protected by me within his position. It didn't take two years before he was an indispensable linchpin within the company. Not only as a human being but also through his achievements.

Another example is Roza, which happened at the beginning of 2000. She talks faster than she can keep up with her thoughts, and she has an energy that makes it seem that you are always surrounded by three or more people, even when you are together with her in 1 room.

We didn't really need Roza, but an office manager was convenient. Someone who arranges things and takes care of some administration and lunch. It didn't take weeks before not her performance, but her being her made a difference. She was the listener among colleagues, the translator as a designer or programmer could not express something, and she was the joy maker. Roza made it a pleasure to come to work and made everyone flourish and be themselves. Not because of what she could do, but because of who she is.

When one day, more than 40% of the costs of the Budapest office had to be cut, Roza was at the top of the HR list for an exit. With a developer, you make money, and an office manager who sometimes does some translation work costs money. Seems logical. Fortunately, we made the right choice to keep Roza. That made the necessary reorganization simpler and more humane because of her gift as a human being to explain the cause and necessity to colleagues. Through her presence, she was able to connect the people who remained after the reorganization, involve them in the new direction and make them feel safe. A role that really isn't just for leaders and CEOs. It is a role that genuinely human people naturally fulfill, whether they are a CEO or not.