Is Phnom Penh becoming the city of rat race and trash? 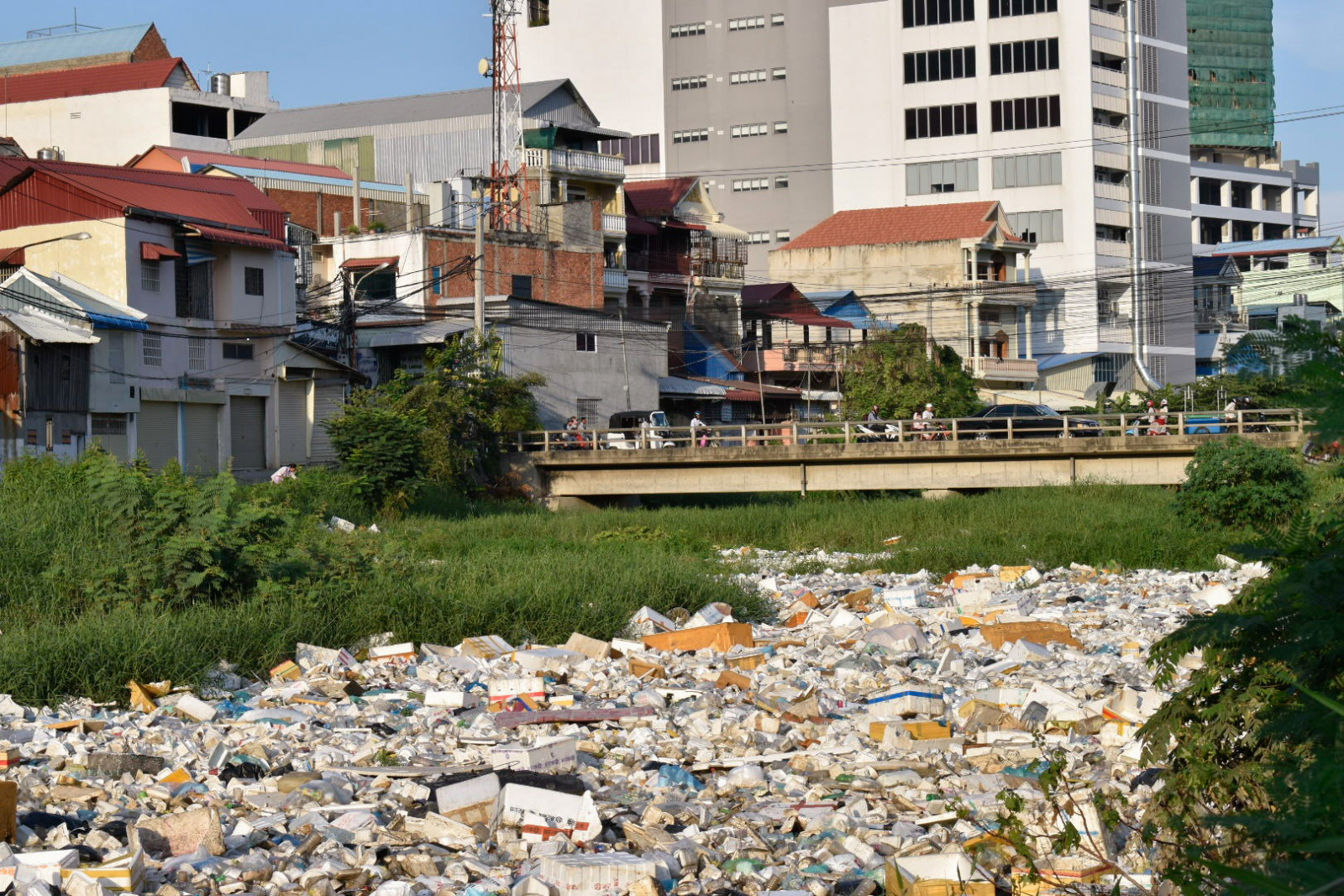 Phnom Penh has been pretty much of a "Boom Town" over the last ten years and there are no signs of things slowing down, yet.

Ever since the billions of dollars of Chinese investments have put the whole expansion for the Cambodian economy basically on to steroids.

Don't get me wrong here because Phnom Penh is still a nice place to live and stay for a while. But there is also a dark side to all of that.

New high luxury condominiums are on the rise all over town, golden ornamented casinos opening doors to even more gambling options than in Macau. Foreign currency money exchange banks with marble high street appeal are available to get your money invested into US dollar assets.

The place is continuously humming with activity 24/7 and the once sleepy town of Phnom Penh is now converted into a permanent construction site. Accommodating mainland Chinese new owners in modern living high towers and spacious penthouses.

Thousands of these Chinese, who manage in Cambodia, to oversee the investments from China.

The Khmers are happy to jump to the possibilities to cash in from the building boom and real estate sales and newly offered services needed. 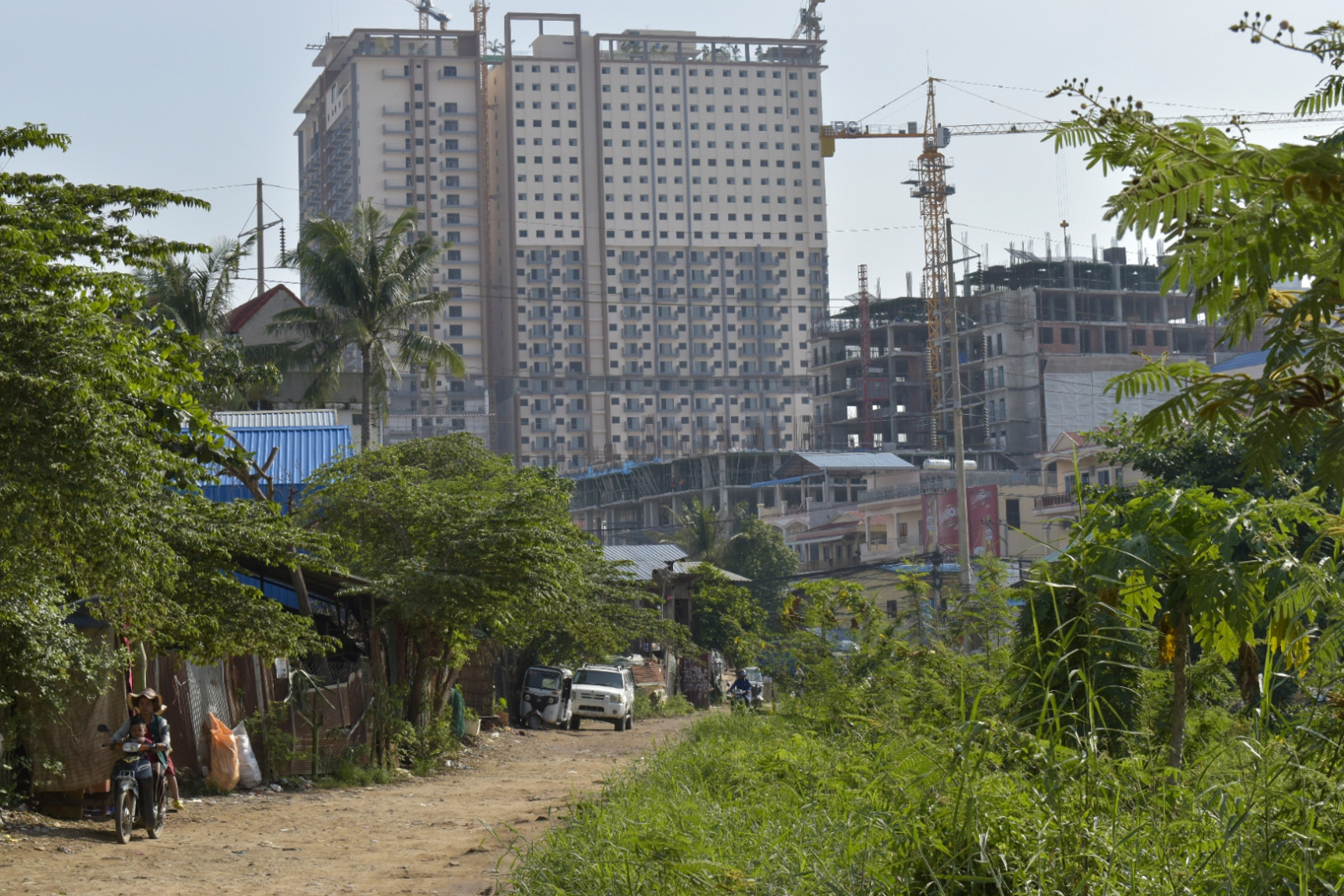 Surely the newfound prosperity comes at a price for the environment and makes the division between the haves, and not have very visual and very disturbing at times. 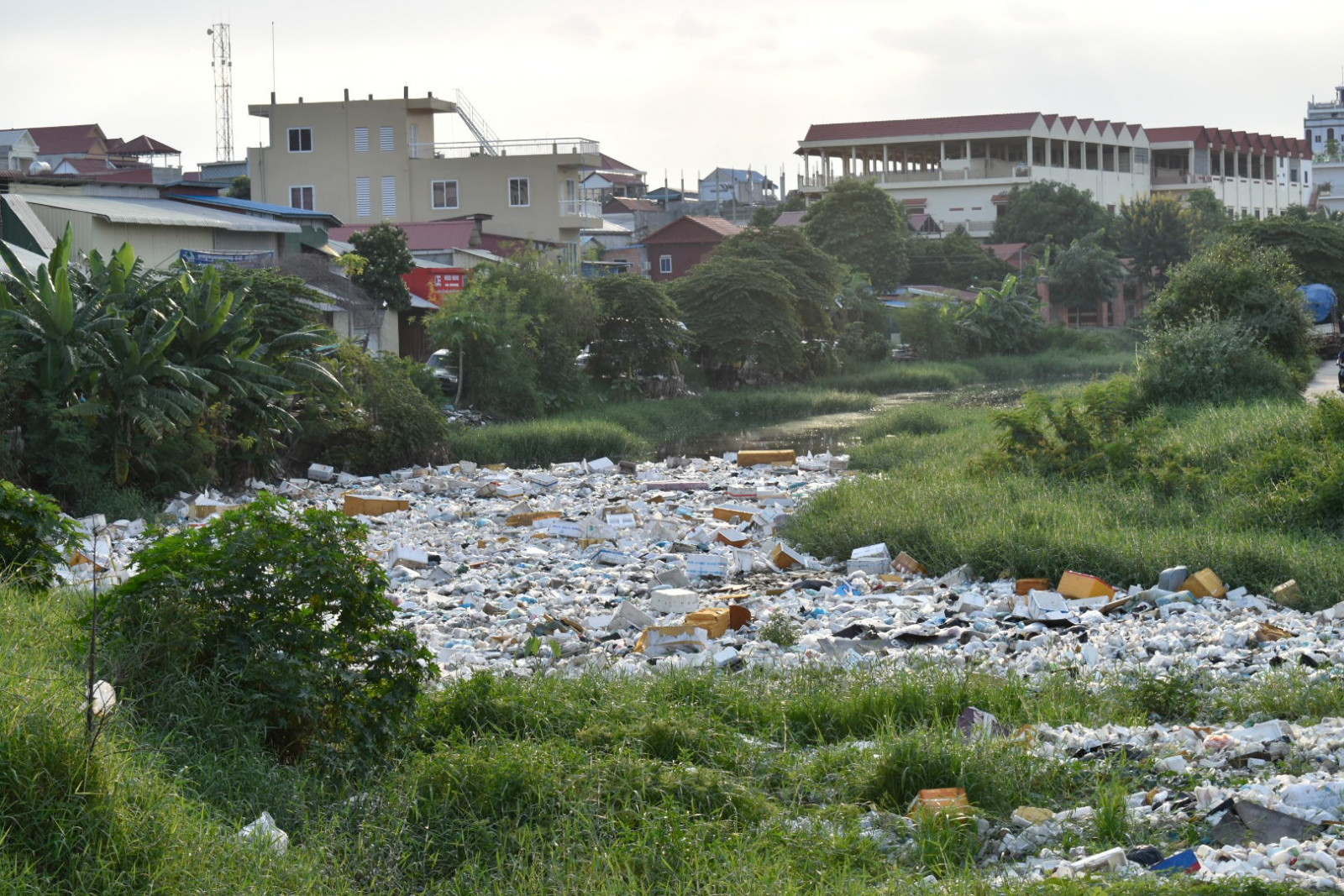 Phnom Penh inhabits around two million-plus inhabitants and counting. If anyone is even actually counting and this is also unclear but let us assume we have around 2 million people here in Phnom Penh City now in 2019-2020.

Especially between the natural city urban borders, like roads, rivers, and creeks or railroad tracks, or often just between the neverending progress of disappearing natural landscape and the unstoppable urban sprawl you can see, and smell the impact of the trash that comes with this activity of building and consuming.

Everything is packed in plastic. Even plastic bottles are packaged into plastic. 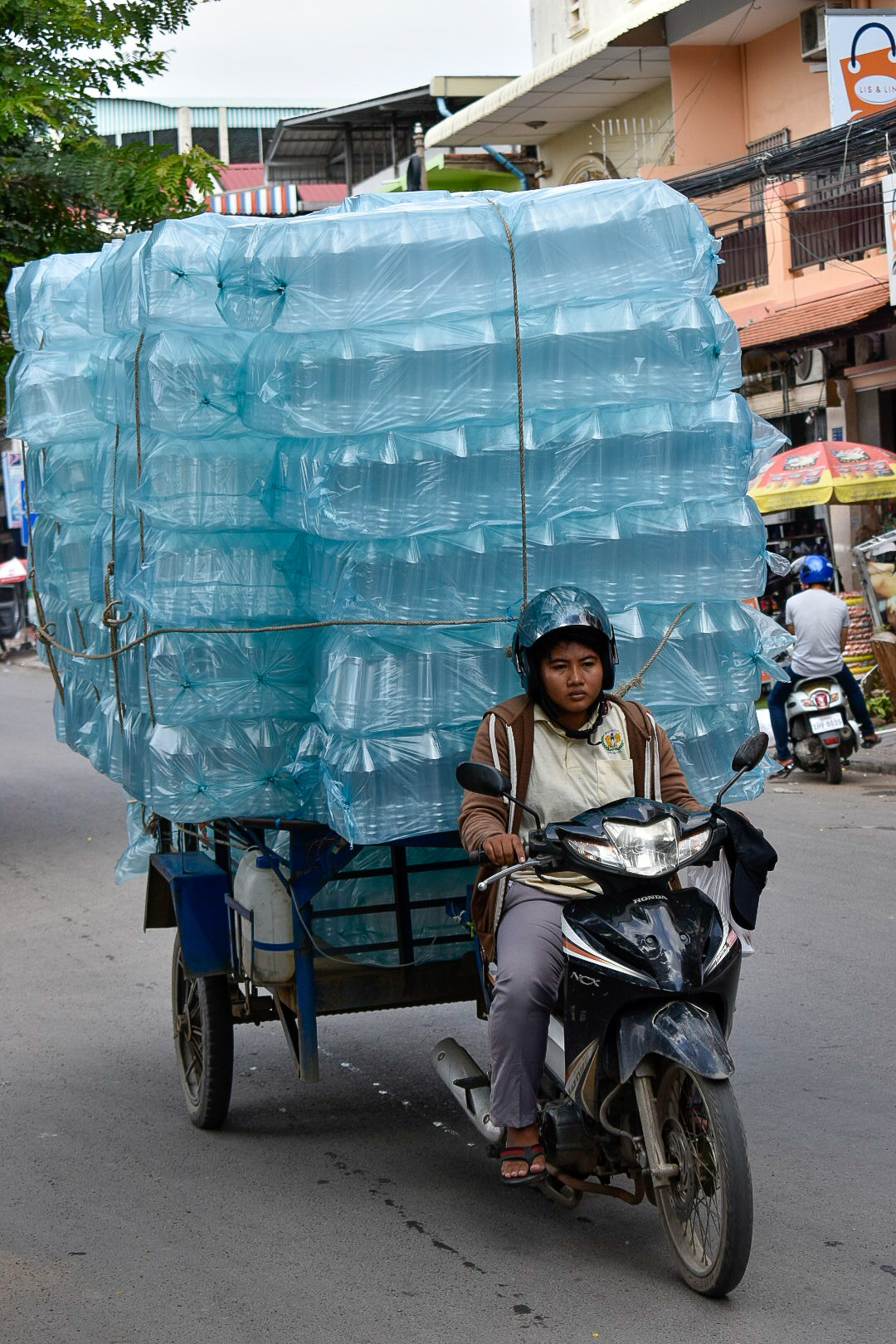 That's why I took these images of Urban Landscapes and behind the high walls of those impressive new construction sites of today in Cambodia. Just on the outskirts around those borders and streams and small rivers and in-between places of nothingness. I do find these places very interesting and also alarming but photographical beautiful in its contradictional ugliness that depicts the human nature for expansion, destruction, and survival.

It's those trash-filled locations where poor people and old local communities live and where no one bothers to go.

There you find a vacuum in the city and at the same time, a reality check into our days of privileged advertised consumerism and the make-believe dream of Urban Oasis and Luxury Life Style living only promised to the few. 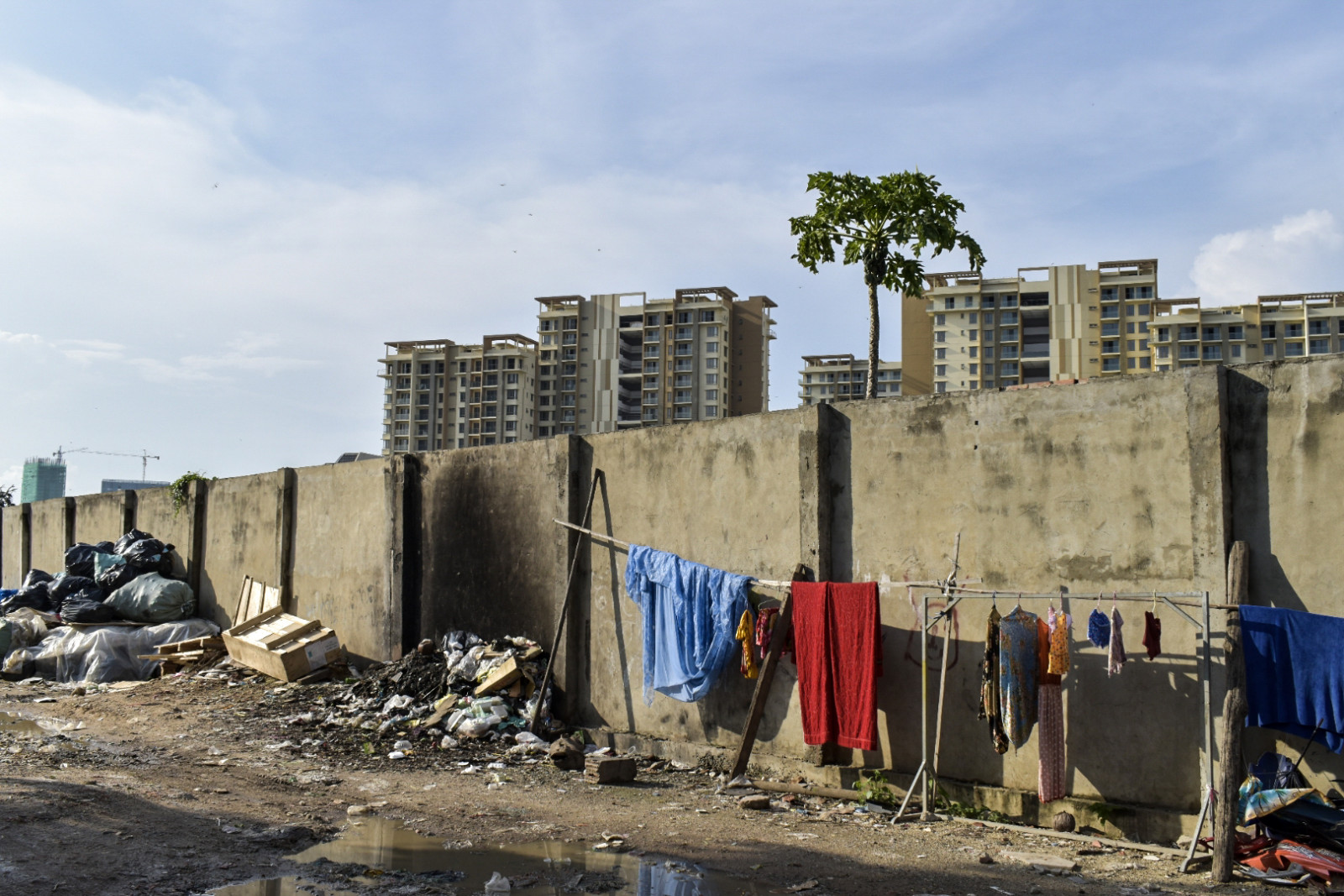 It's a harsh place there behind those walls and it stinks literary of burned plastic and the sour stench of garbage in decay, a new daily dose of 3000 kilos trash. In the tropical heat of 34C. 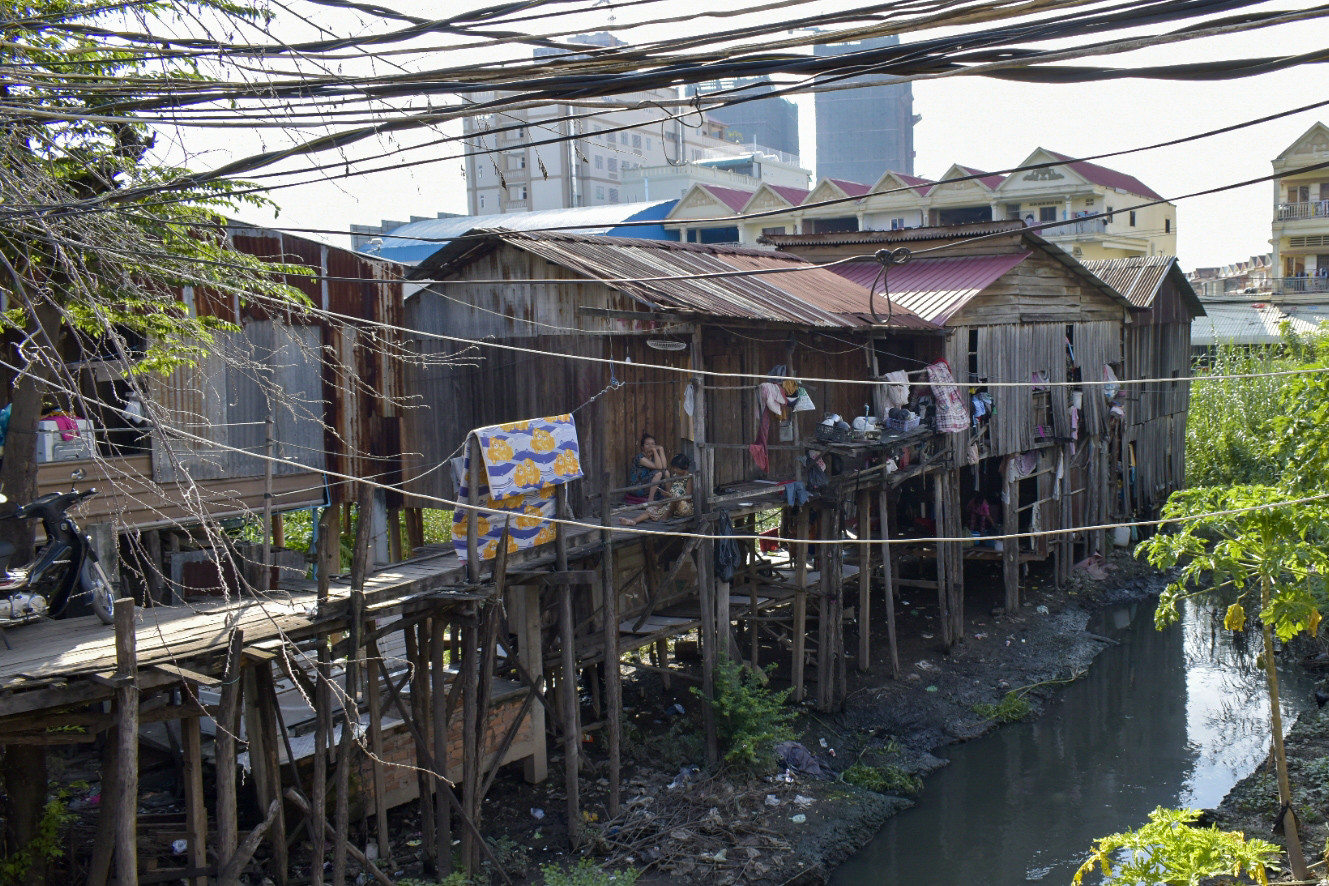 Out of sight is out of mind

New massive highrise constructions are creating a hard distinction between places, a raggedy void of urban decay and human neglect around them. Everybody is to busy to notice or understand that nothing will be done about it for now. The investors from far away don't know and don't care, the locals have no voice in this and bowed their heads and just accept it.

It's here where none of the commercial garbage collection is being done, since no one is going to pay for it, and in a society where no one seems to care, at least not yet.

Unfortunately, I also see often very proud middle-class Cambodians with their kids, throwing empty plastic bottles into the rivers just, as a matter of fact, no thought about it, and they probably don't realize the impact of that small gesture of destruction.

I know that this all sounds like a western cynical old fart, but then again it means that this garbage issue has still a long way to go and needs a national awareness campaign to start with.

With daily garbage amounts of more than 3000 tonnes being collected by only one commercial garbage company and hundreds of freelance garbage pickers who roam the streets and get the first hand of anything still worth anything out of the garbage heap. 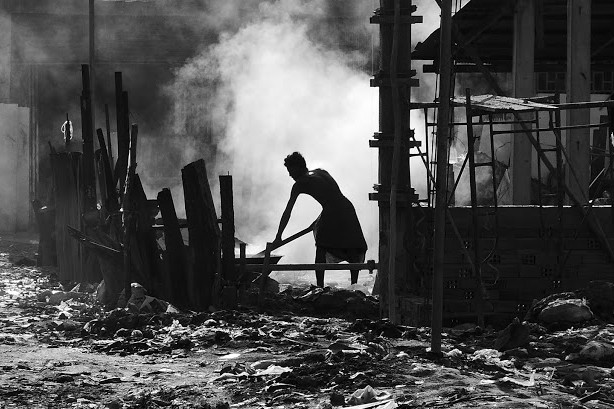 Garbage scavengers work a full day for a few dollars. 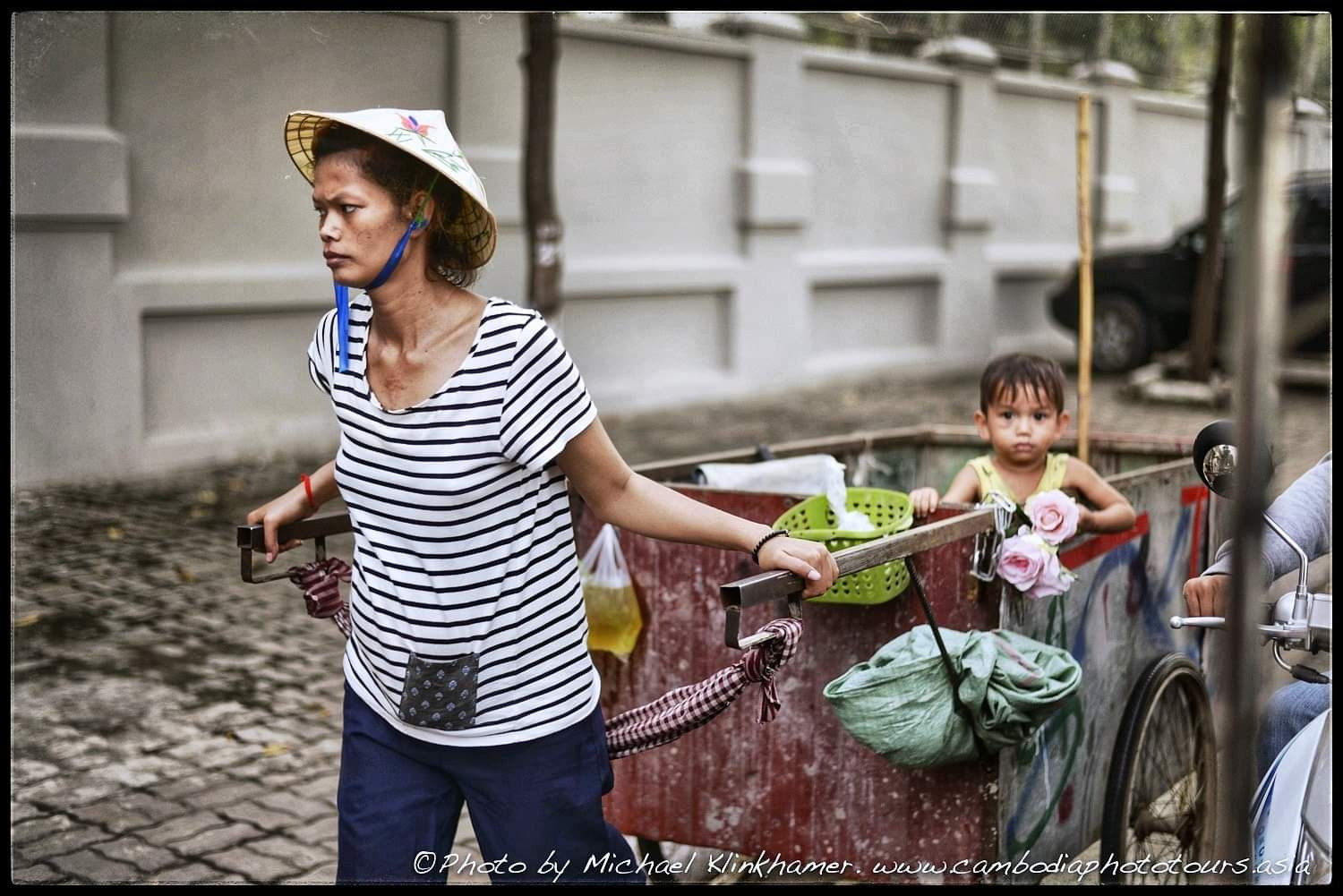 These scavengers are mostly interested in for example; tin cans, cardboard, and hard plastic bottles and other leftovers, like electronics and metals that they will filter out from the trash and throw it in their hand-pulled carts and sell their catch on the outskirts of town to the wholesale recycle garbage companies. It must be said that without the street scavengers Phnom Phen would be an even more filthy place. Garbage scavengers work a full day and often during the nights for a few dollars a day and I see them often tow their small kids with them on the job as there is no other option for them. 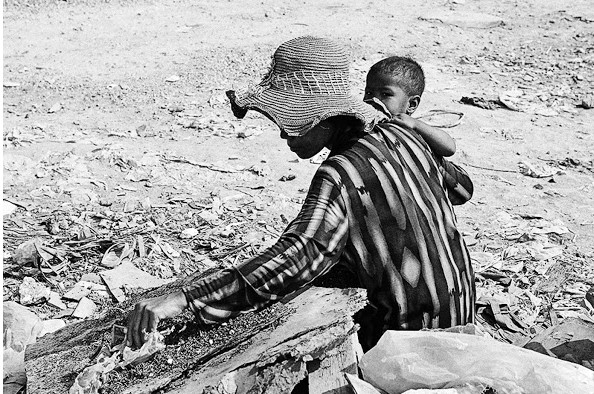 Phnom Penh developed rapidly over the last ten years with economic growth of around 7.5% annually, it is a magnet for people from elsewhere to come here and to find jobs and opportunities that are not available in the mostly poor rural areas. The never-ending building boom is for many the best way to get a job and find housing and make ends meet and take it from there.

This massive amount of consumer and building garbage that mostly is seen swirling around and floating in rivers and creeks or wetlands are the one-time usage styrofoam plastics that eventually are being thrown away and end up in those locations like waterways and in between building sites. And that is often also the location where the poor people live and the construction workers, and the locals who see their old wooden housing being dwarfed by new impressive concrete condos and skyscrapers.

During the rainy season between June and November, the rivers and waterways are filled up but also clocked up at certain places because of the plastics and the garbage being washed into the small waterways of which are many in Phnom Penh, to eventually end up in the large rivers like the Mekong and the Tonle Sap or Bassac Rivers. 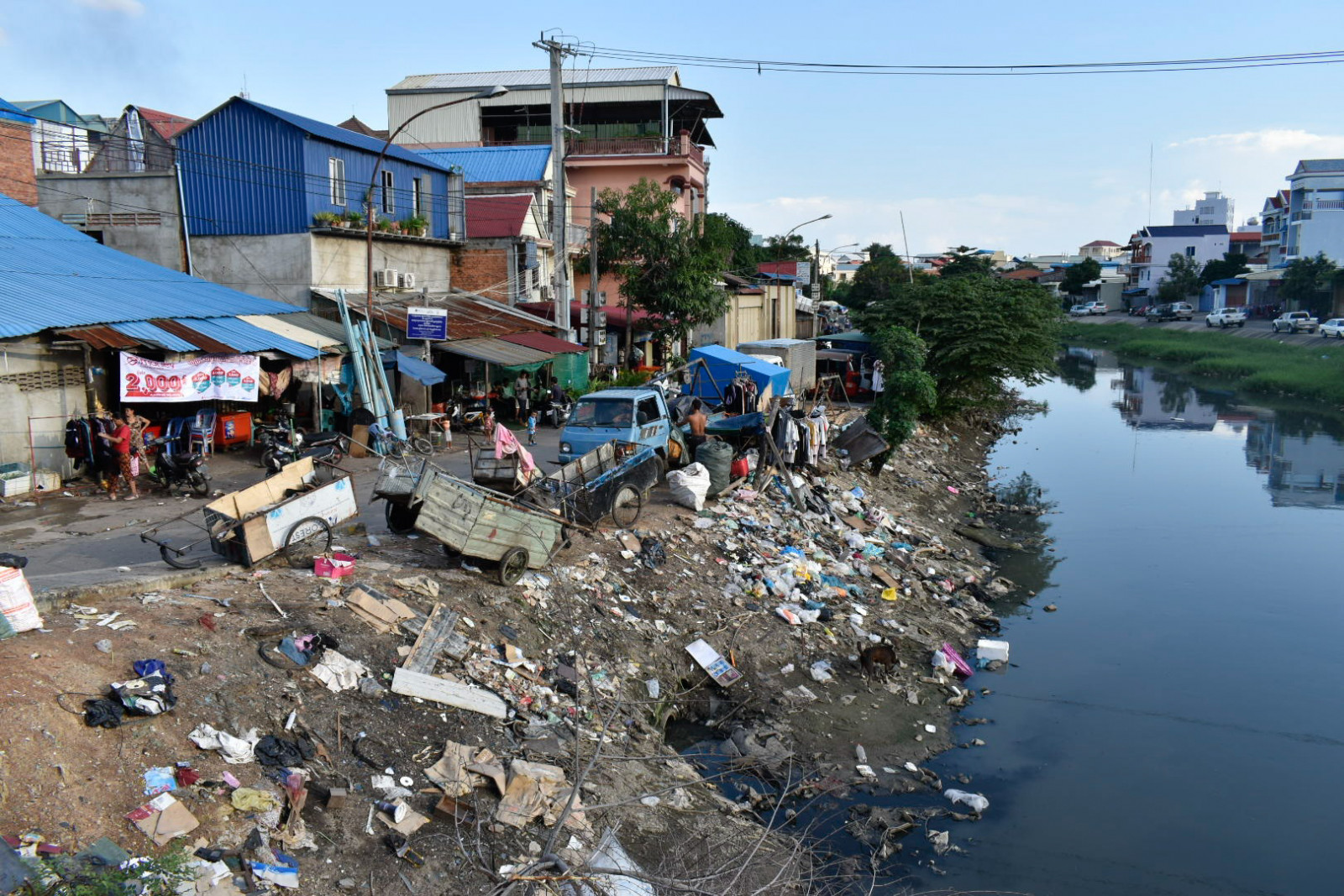 After the rains the rivers and creeks will dry up, the garbage will not move for at least nine months. The bacteria and hazardous effects for the groundwater and people's lives are massive. But when I go to these places the people here in Cambodia smile and don't get upset. They have a shield and they are always thinking ahead, of family matters and to provide food on the table and believe its in the name of progress. They will burn the trash as good as they can and shove the remains into the nearest ditch or creek or lake.

Willingness to leave nothing behind.

The environment and all peoples well being hangs in the balance right now and there are no easy answers. The cornerstone for a garbage solution is on our behavior and willingness to leave nothing behind, but that's easy to say and as each of us knows not easy to do. Education and awareness are the tools to start with. In the meantime, international awareness and regulations are being set up with multilateral partners to work together in order to improve the solid waste management in Cambodia and the rest of SEA.

The Municipality of Phnom Penh has a big job at its hands and should put things into motion as soon as possible and prevent Phnom Penh from becoming the "City of Garbage." 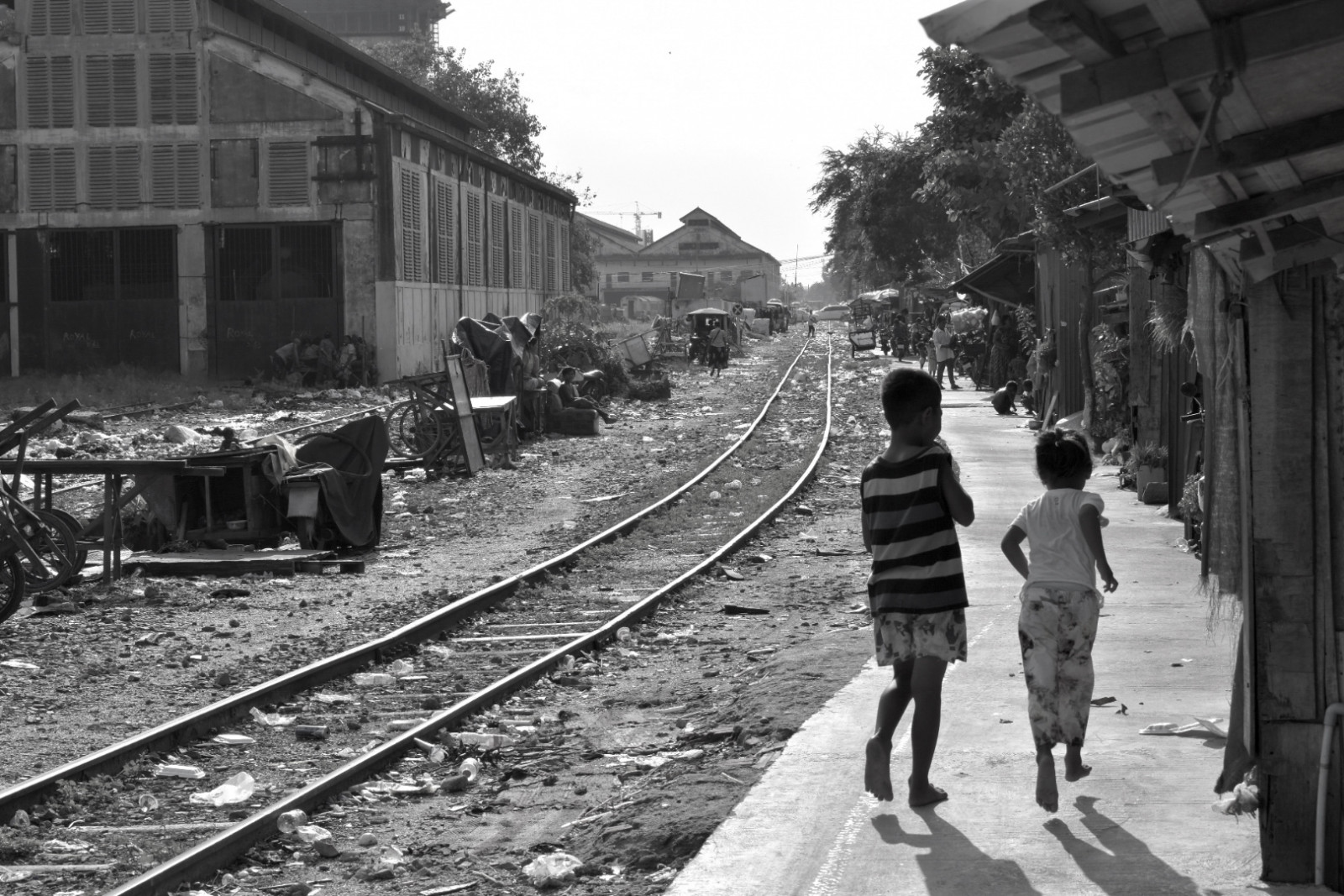 Michael Klinkhamer is a Dutch photographer and journalist working mostly in Asia for the last 10 years. Michael lives permanently in Cambodia and is available for writing/video assignments and photography adventures in Cambodia for the rest of 2019 and into 2020, Thailand, Laos and Vietnam.