What’s going on with street art in Amsterdam these days?

Amsterdam is known internationally mostly for its world-class classic artists. During your stay, you can see some of the most world-renowned painters from the Golden Ages like Rembrandt van Rijn, Johannes Vermeer, Hieronymus Bosch, or Frans Hals and many more.

A stone throws away from the Rijksmuseum you have the Stedelijk Museum with many more Dutch modern art paintings. And of course the most famous of them all Vincent van Gogh at the Vincent van Gogh Museum.

But when you like to explore the city and don’t want to spend your time and money inside one of the Amsterdam museums, it's possible to go and find some cool places with exciting street art at the same time. 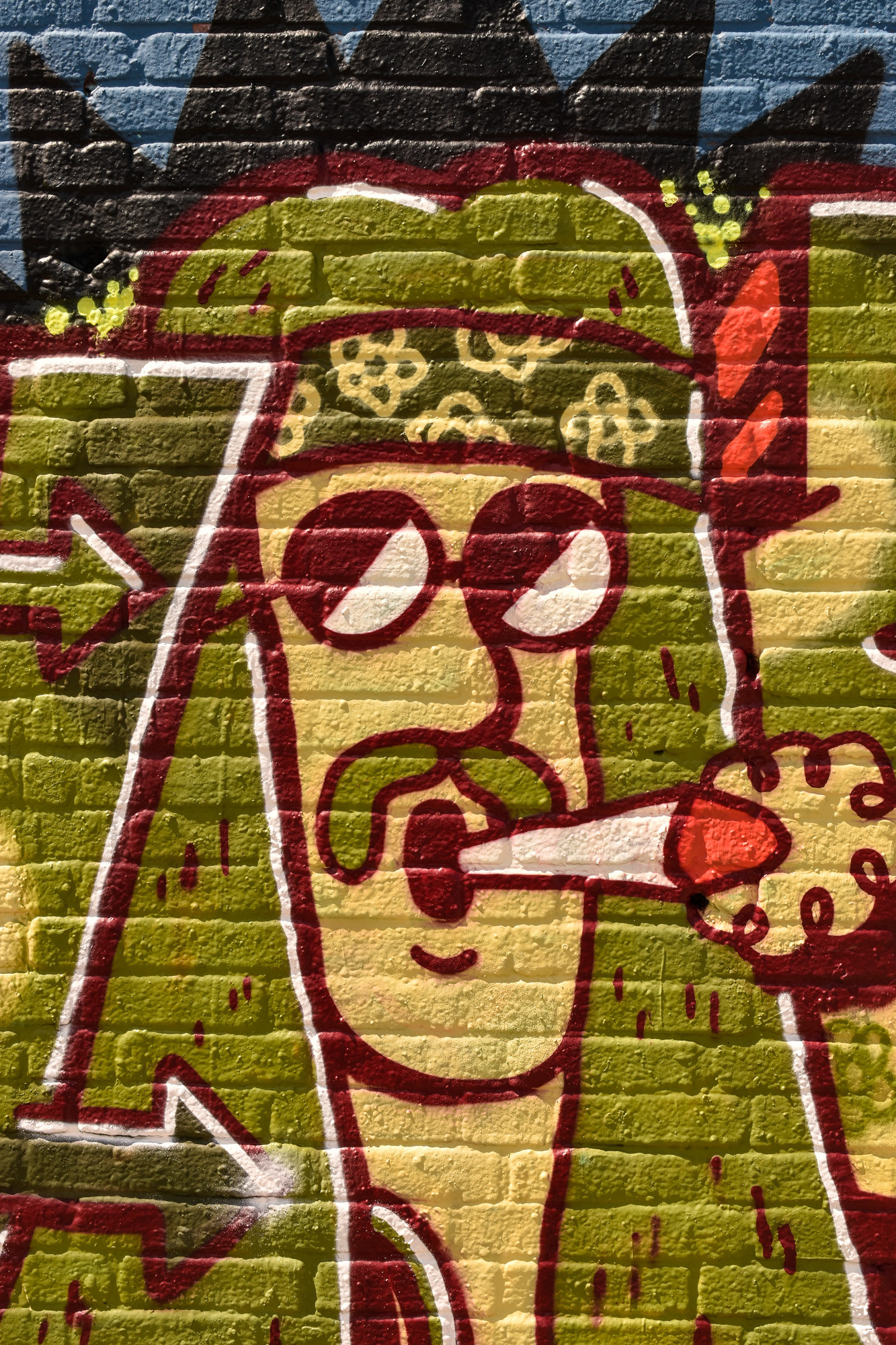 Rent a bike , make a photo tour booking, and we take you around to the best location while creating perhaps your arts in the process. You can bring your camera and even your own set of spray cans and leave your sign in Amsterdam.

Art is always evolving, and artists without access to museums or exhibitions express themselves always and everywhere and do so since the dawn of time. “Kilroy Was Here” is probably one of the oldest and well-known slogans of Independent Street art. 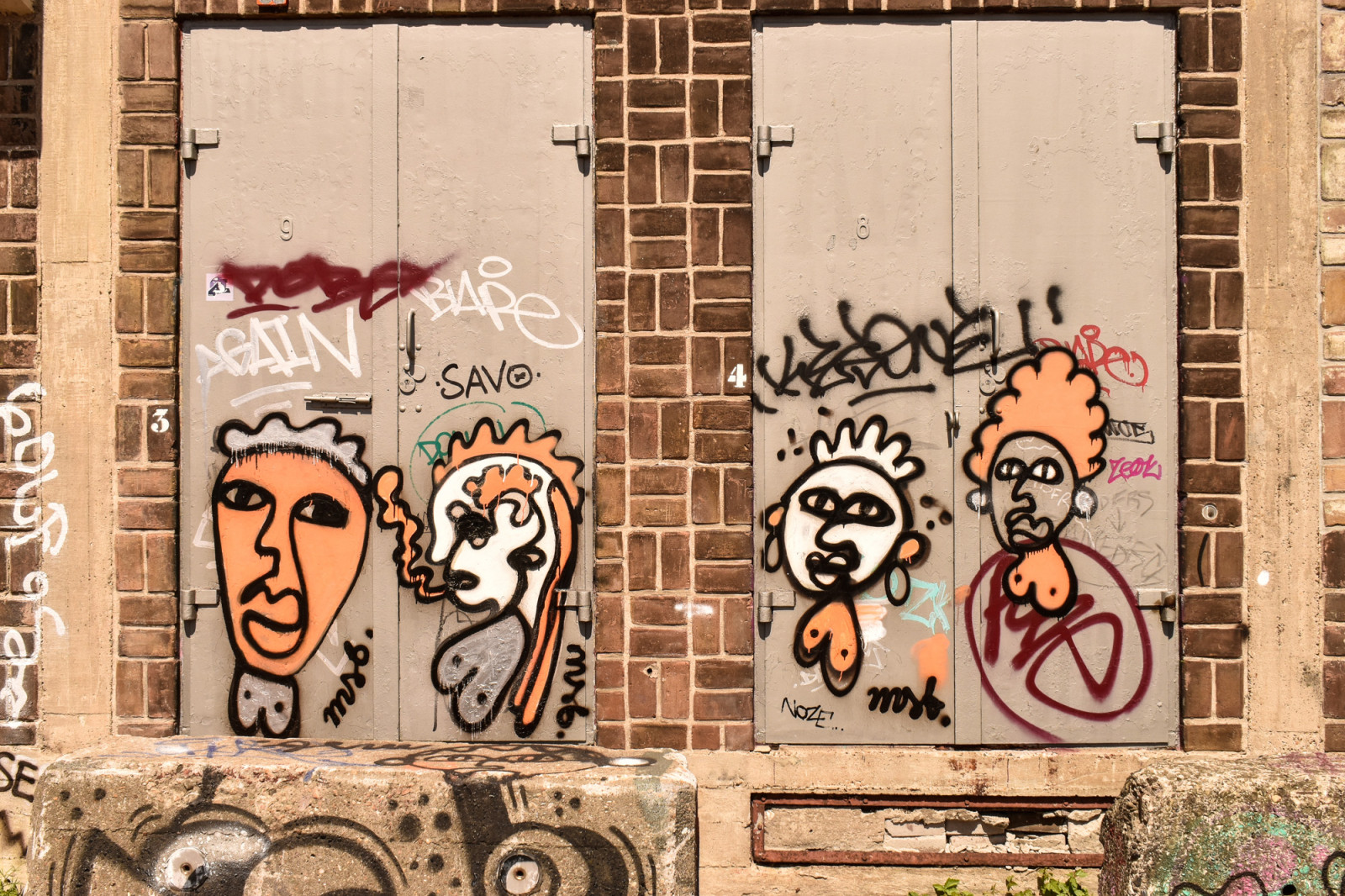 New York in the 70s and early 80s comes to mind with subway trains covered in paint and rough signatures and people hating it for its aggressiveness and underground vibes of destruction and lawlessness and “beef” or battles between rival gangs fighting it out with individual street art guerilla graffiti wars. 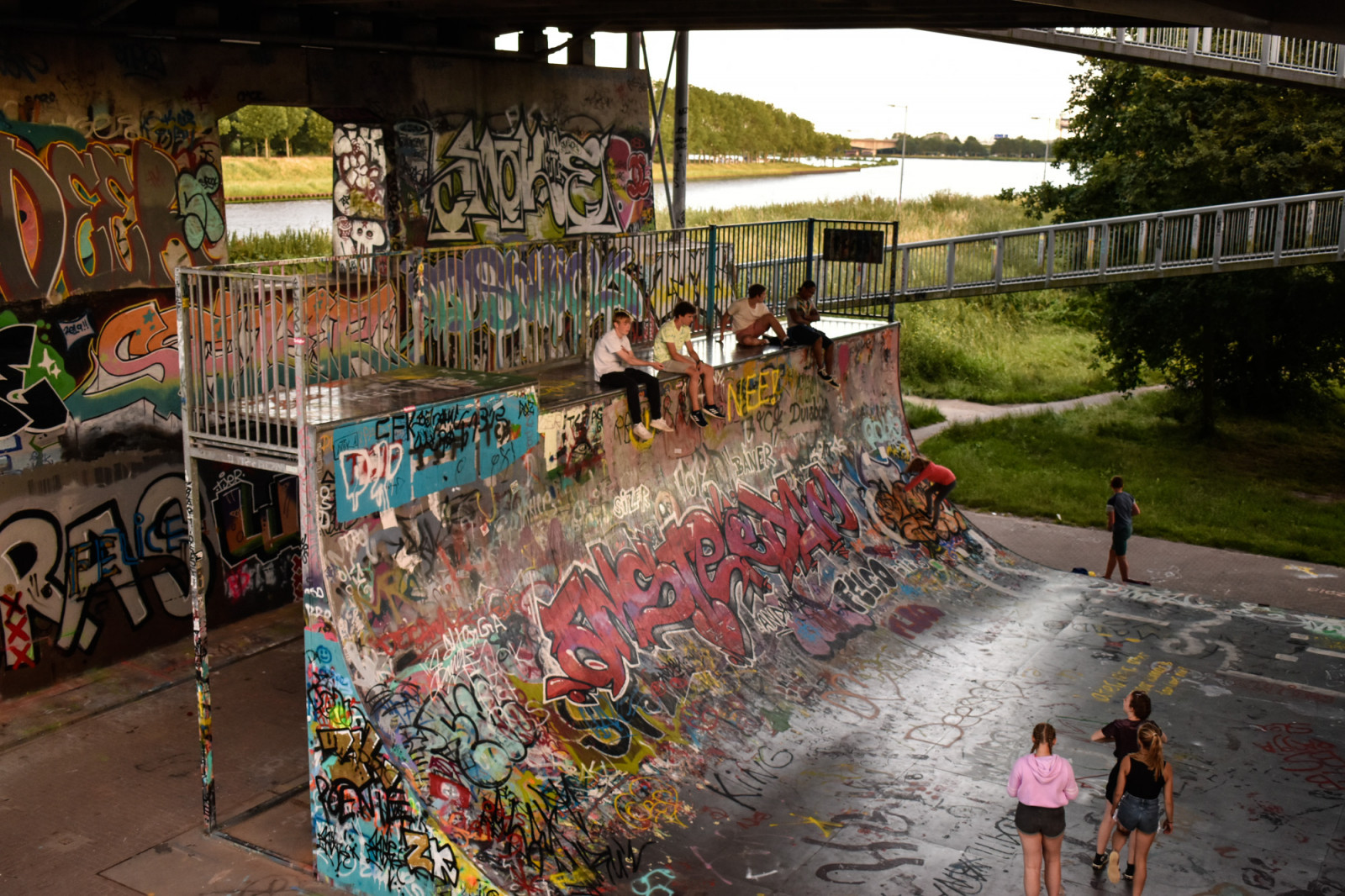 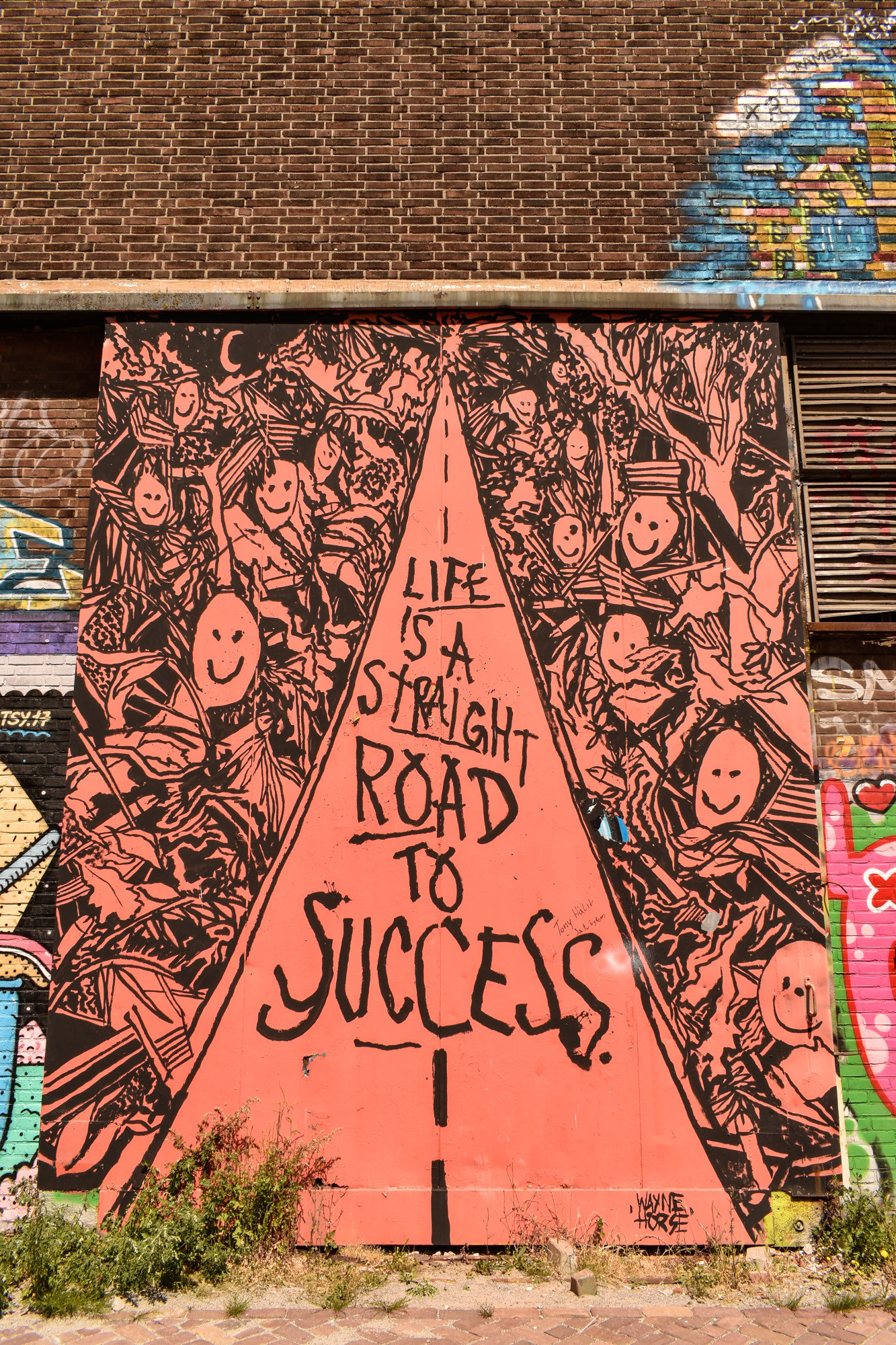 Sprung from underground counter youth culture and activism in the suburbs of almost all major all cities in the world graffiti has become also profoundly linked to punk music, and later hip-hop and rap music. Then MTV came on the tube with many amazing video clips incorporating graffiti styled sets. 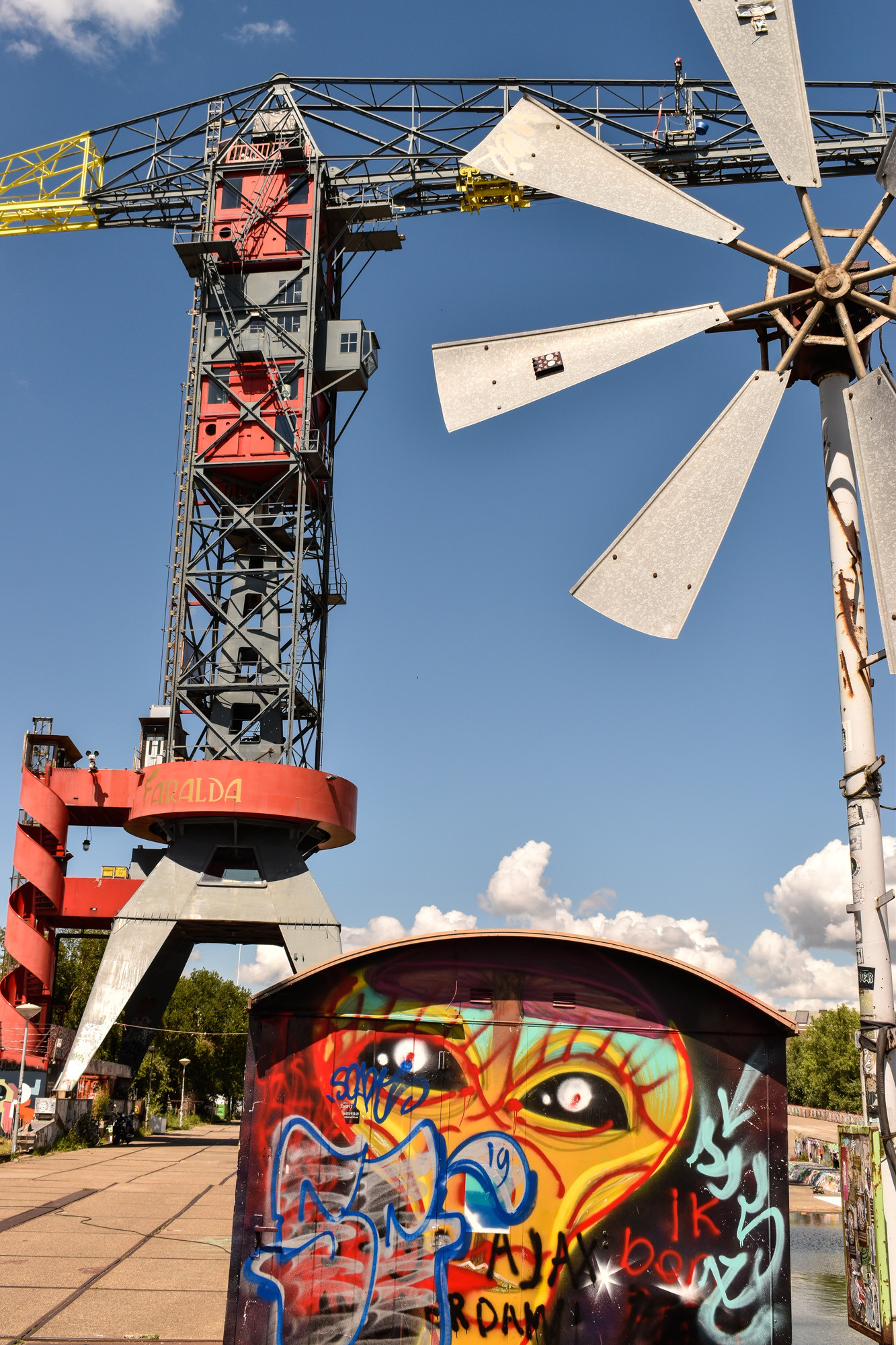 Graffiti was always illegal and gave artists, besides the self-expression and rebellion, a rush for sheer danger because of some dangerous places where they put up the signs, in risk for the police would catch them. 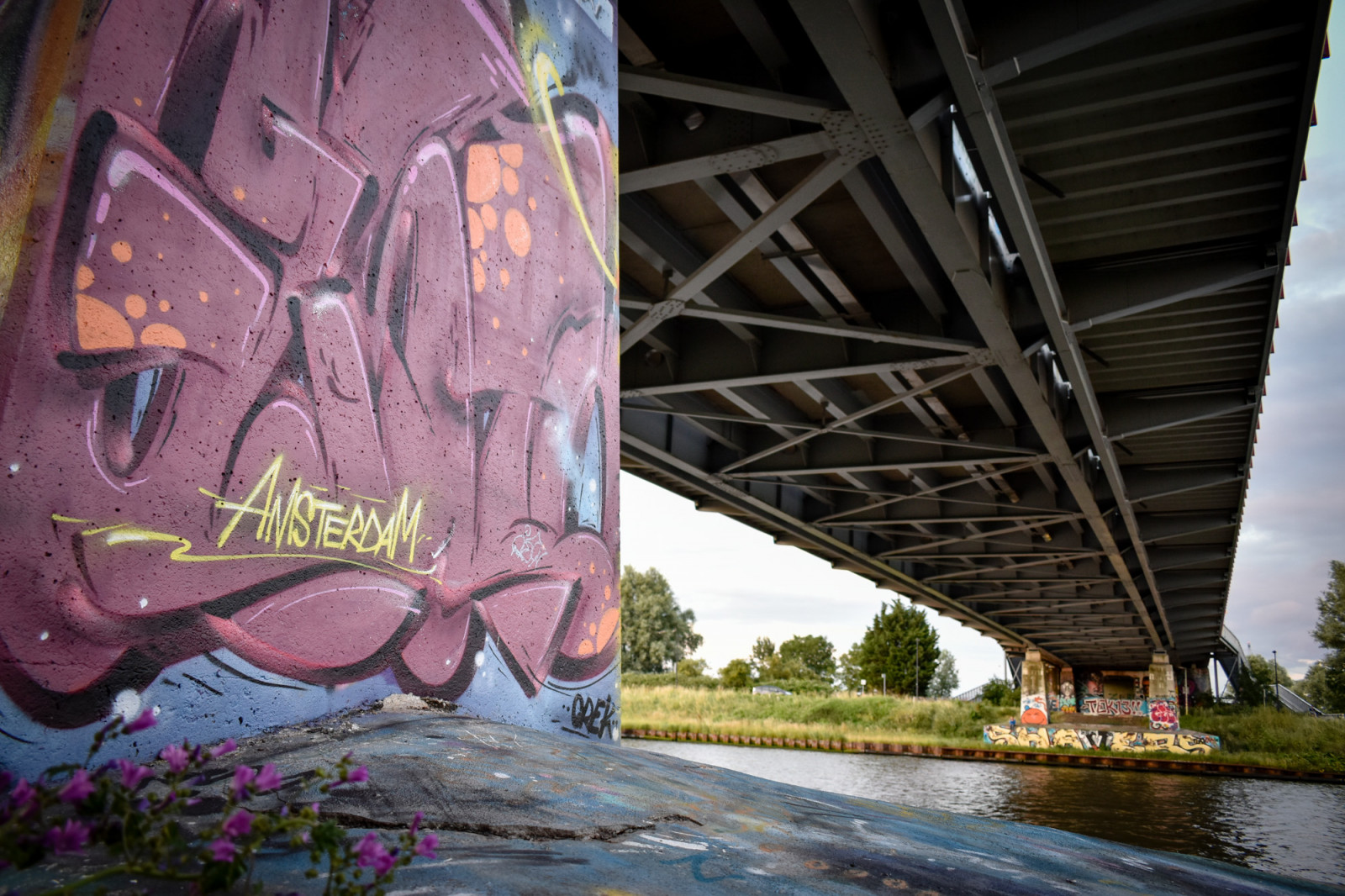 Graffiti or as it is called now street art or urban art is also a way to take on a different identity and be a superhero and to live a fantasy of knowing its you and your buddy’s against the establishment in a battle to become famous in your own right in the street. 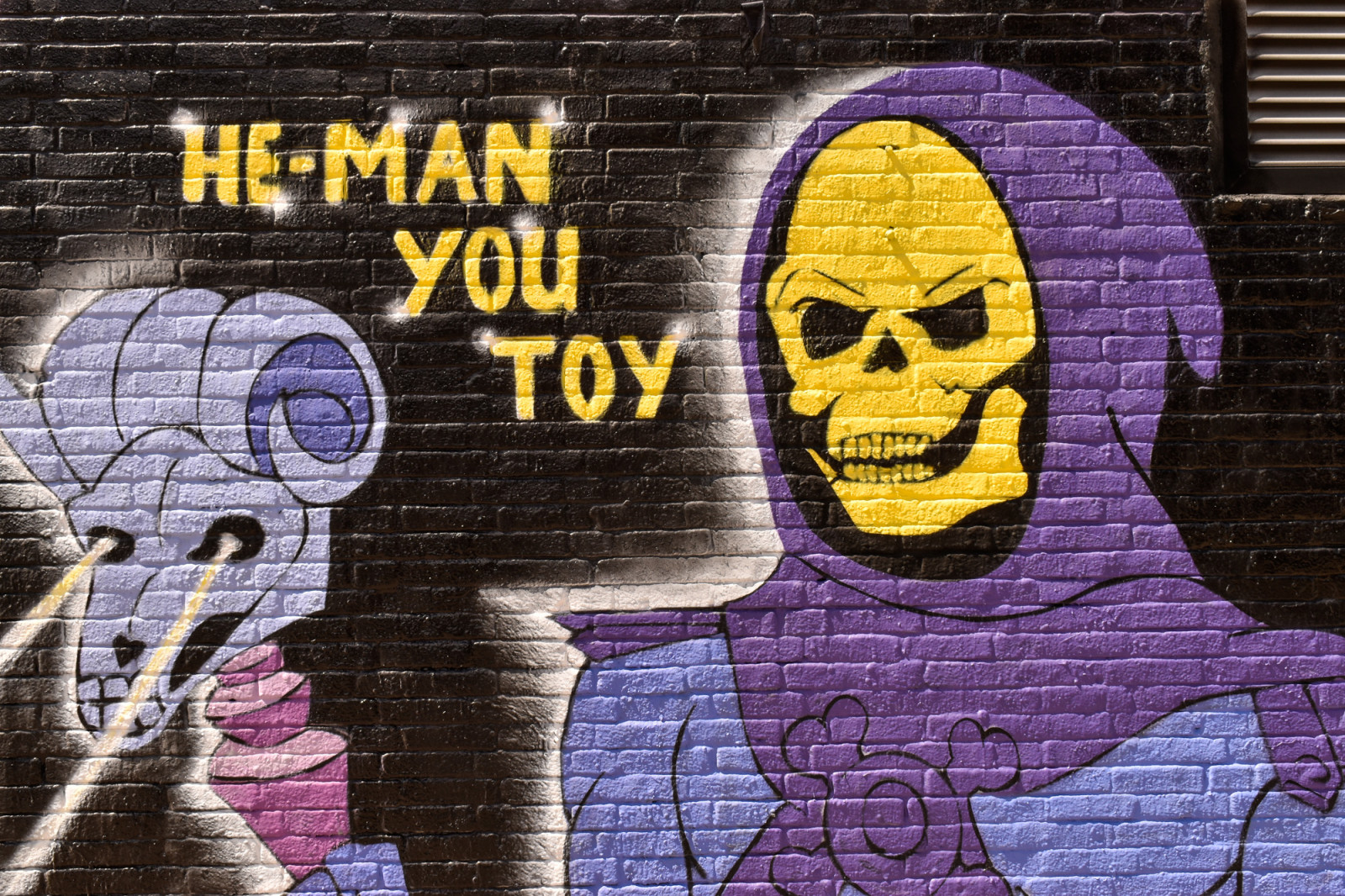 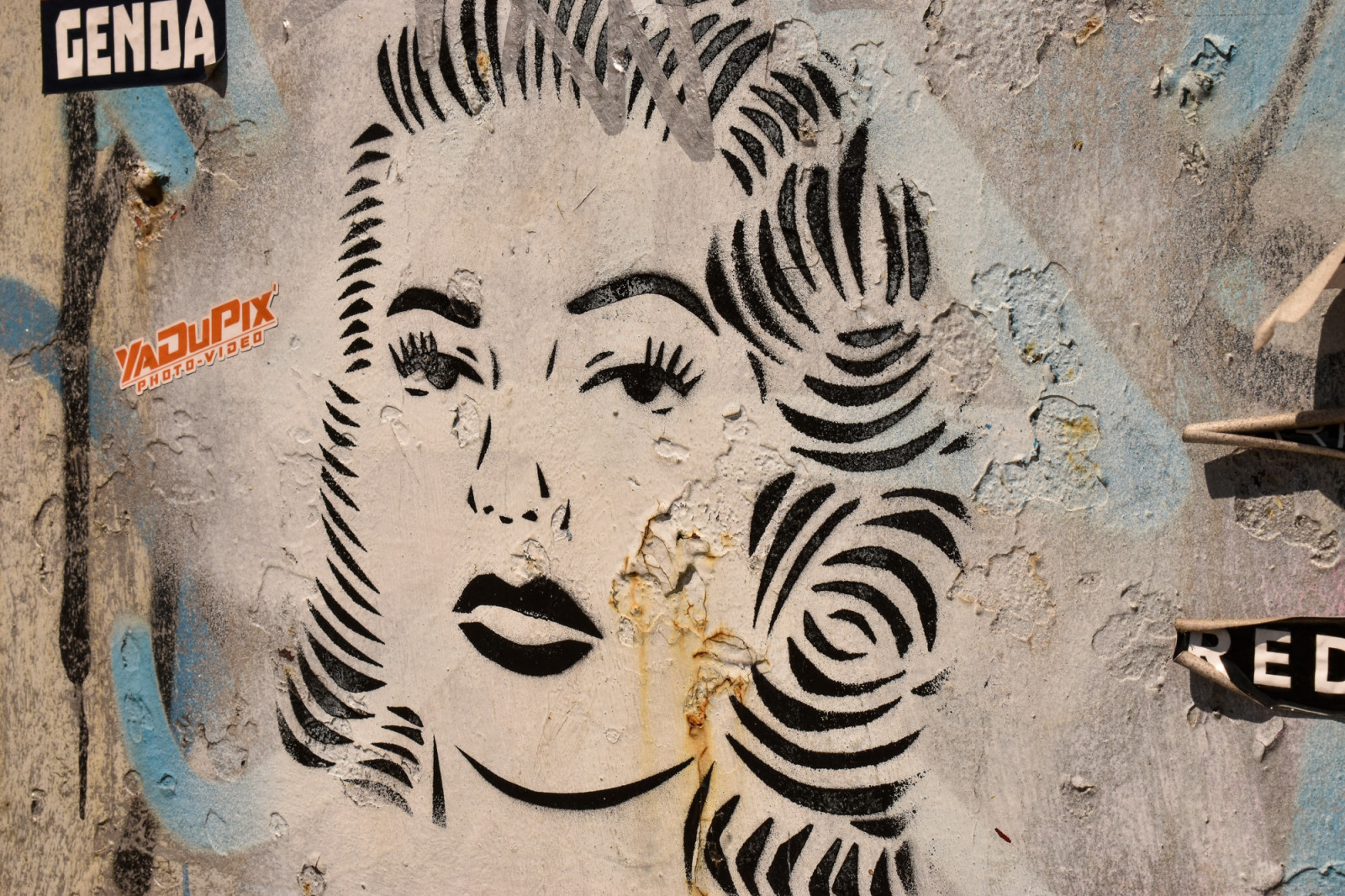 Street art is the term for the more refined and often just beautiful urban arts that gives the location a positive vibe. “Graffiti” is often seen as destructive and illegal and not beautiful. 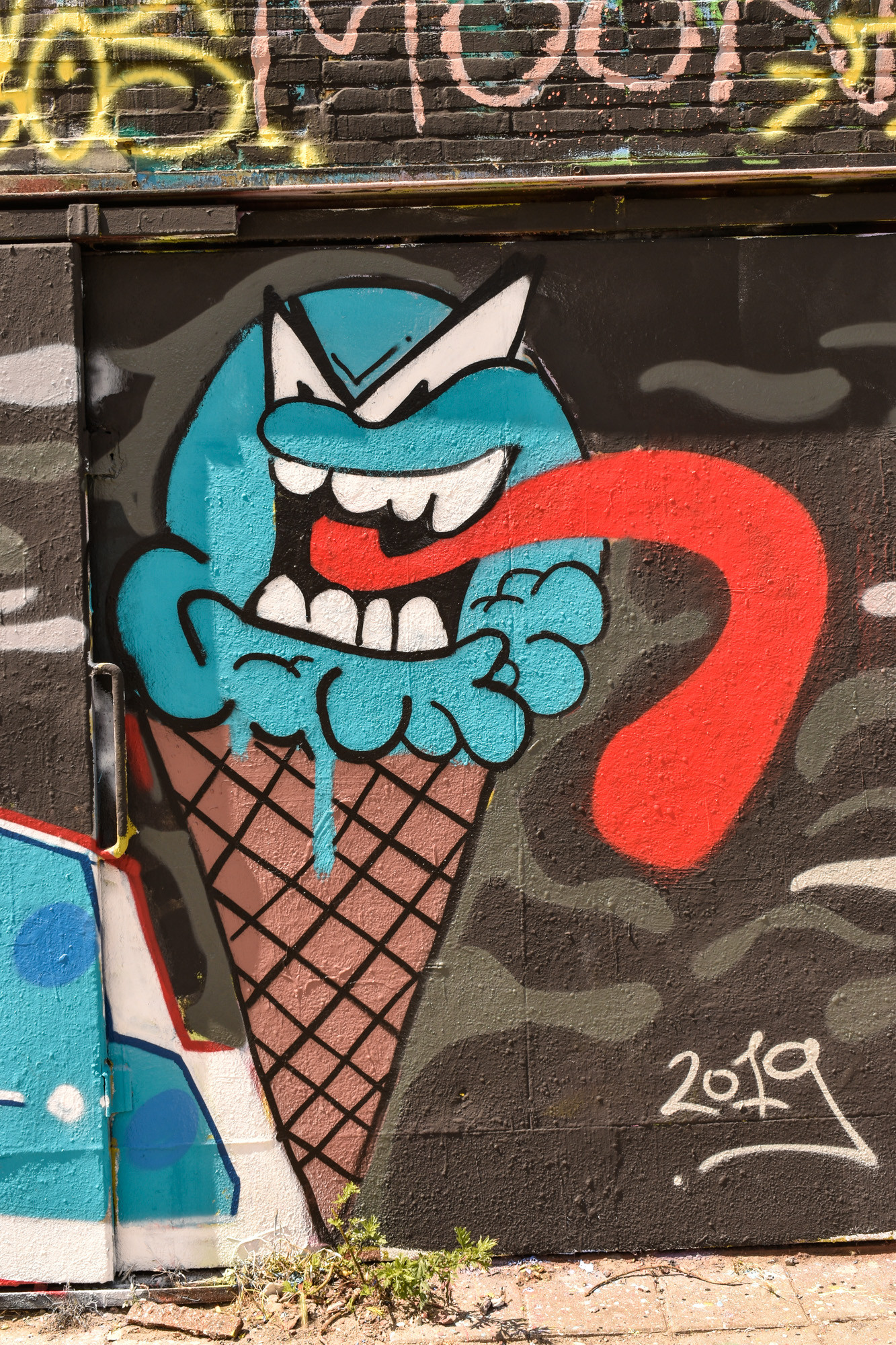 Over the last years, street art and many artists have become entirely accepted and are often hired by city councils or corporations to add some urban flavor to a building or to cheer up a local event. Many street artists have set up successful commercial business models, and hire talented artists for major brands to promote products. Or they get hired to pimp up a dull neighborhood or office building. 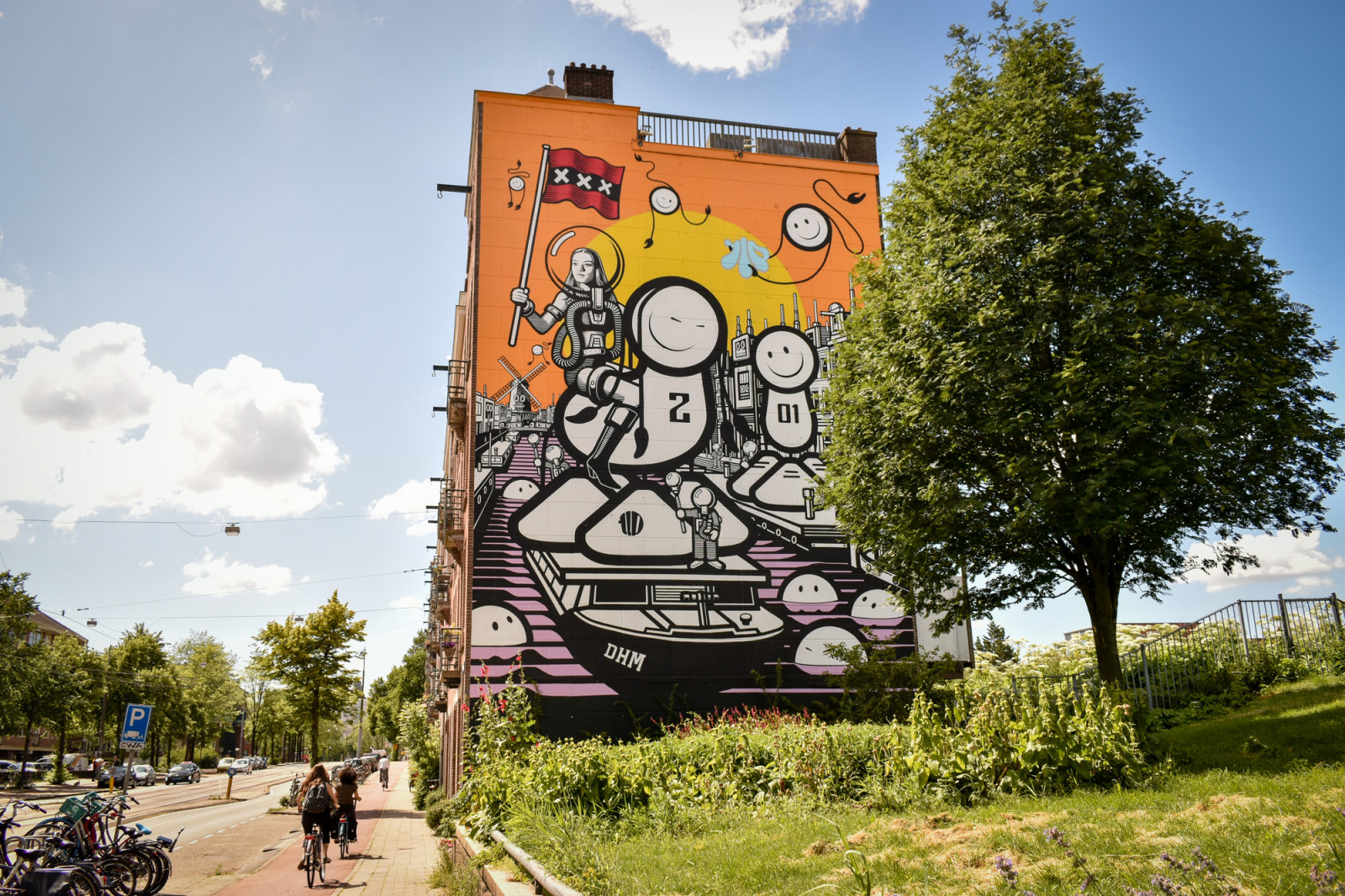 People like, for example, Banksy is today a worldwide known icon of independent street art. He surprises the wall of many cities with his often political powerful and subtle messages of activism. 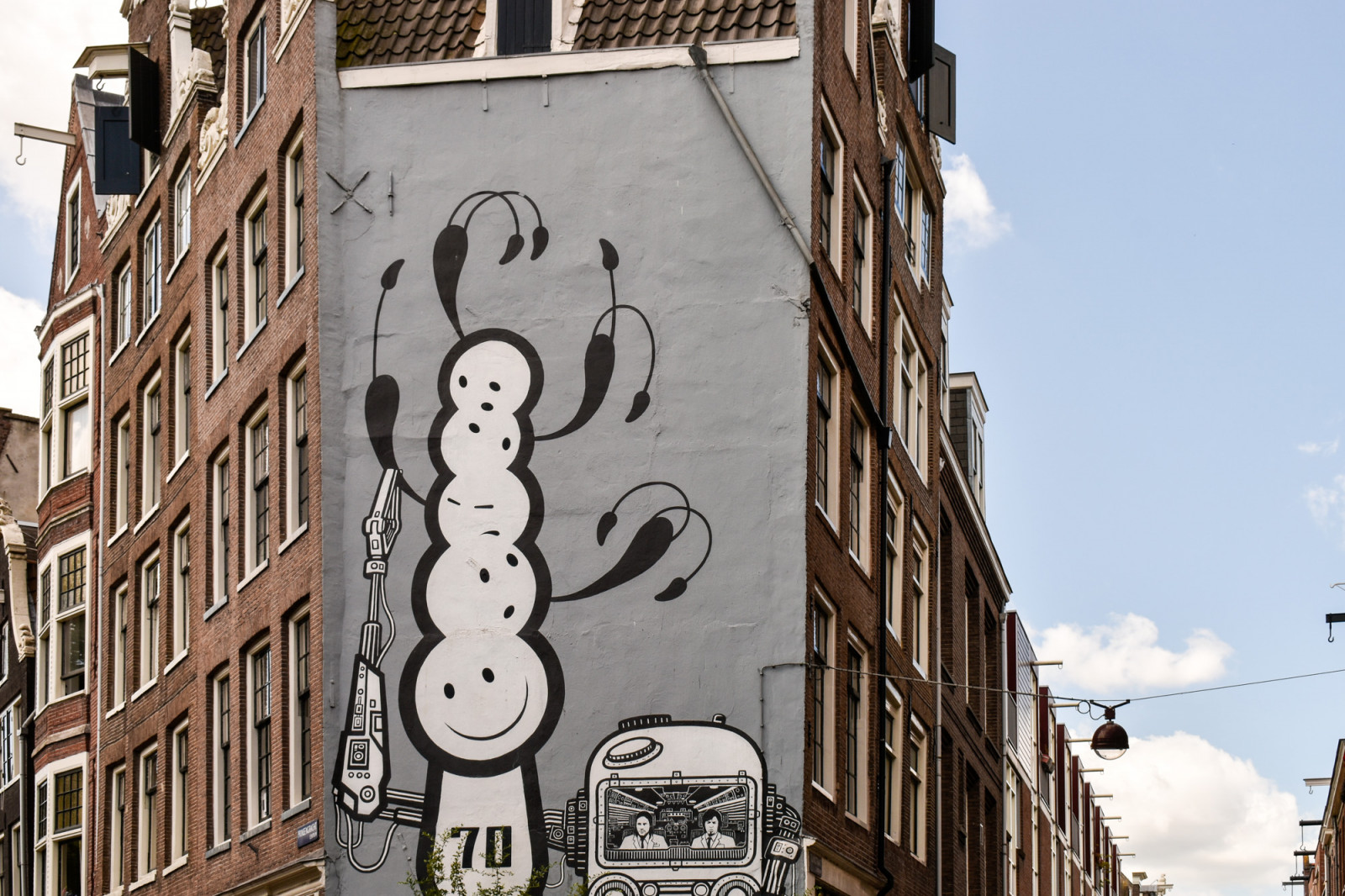 Where can you see the best street art in Amsterdam?

Amsterdam is a great place for seeing some strong and very talented street artworks while cruising the city with your camera. The street art scene here is very relaxed. The old days of aggressive street gang New York-style confrontations with illegal graffiti signs over public property, are not ways we do things in Amsterdam in 2019. 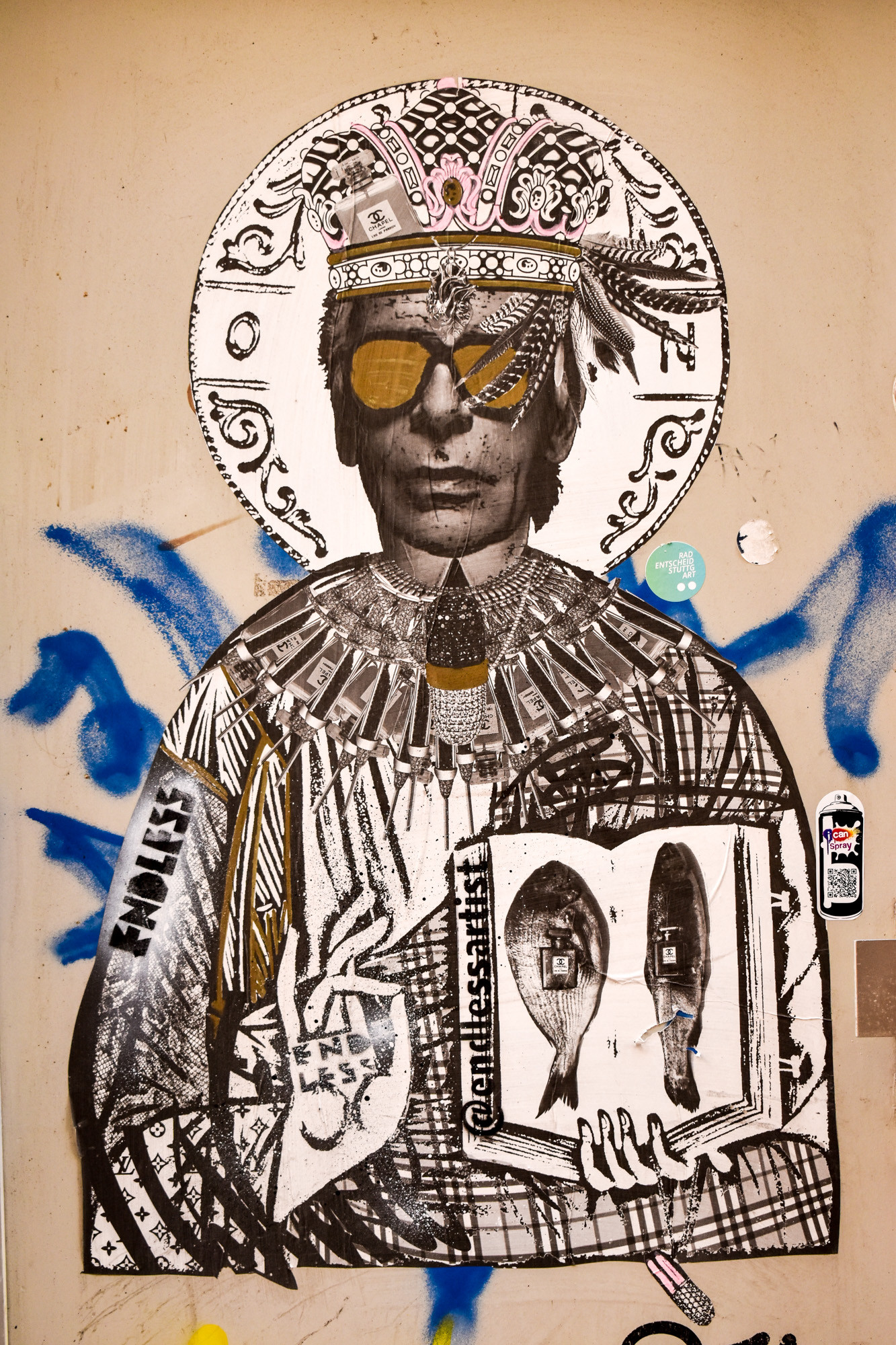 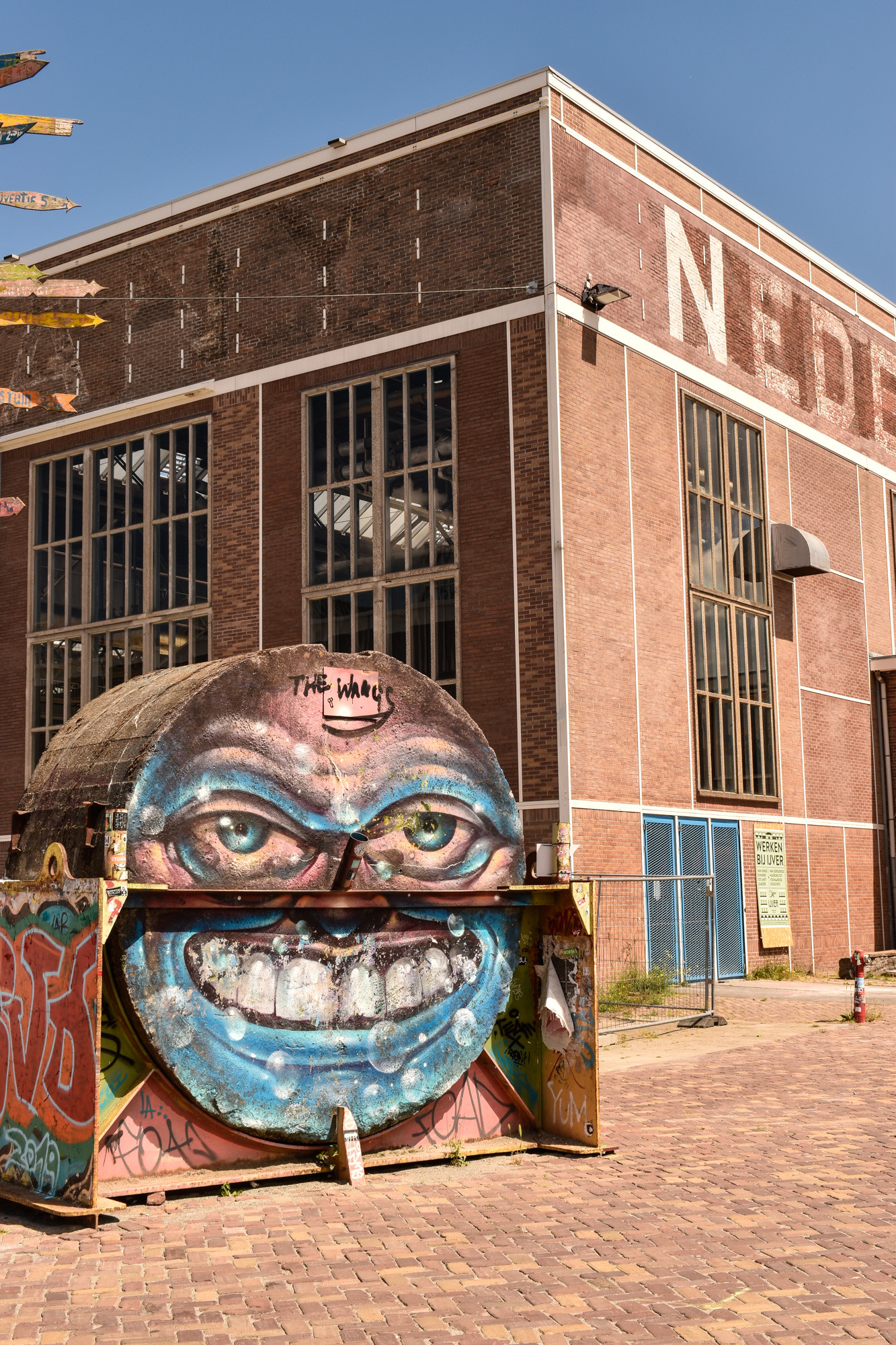 The challenge for us photographers is to try to give the urban street art some special context within our pictures. We look for a connection with the location and find an interesting angle or moment while shooting cool urban art. 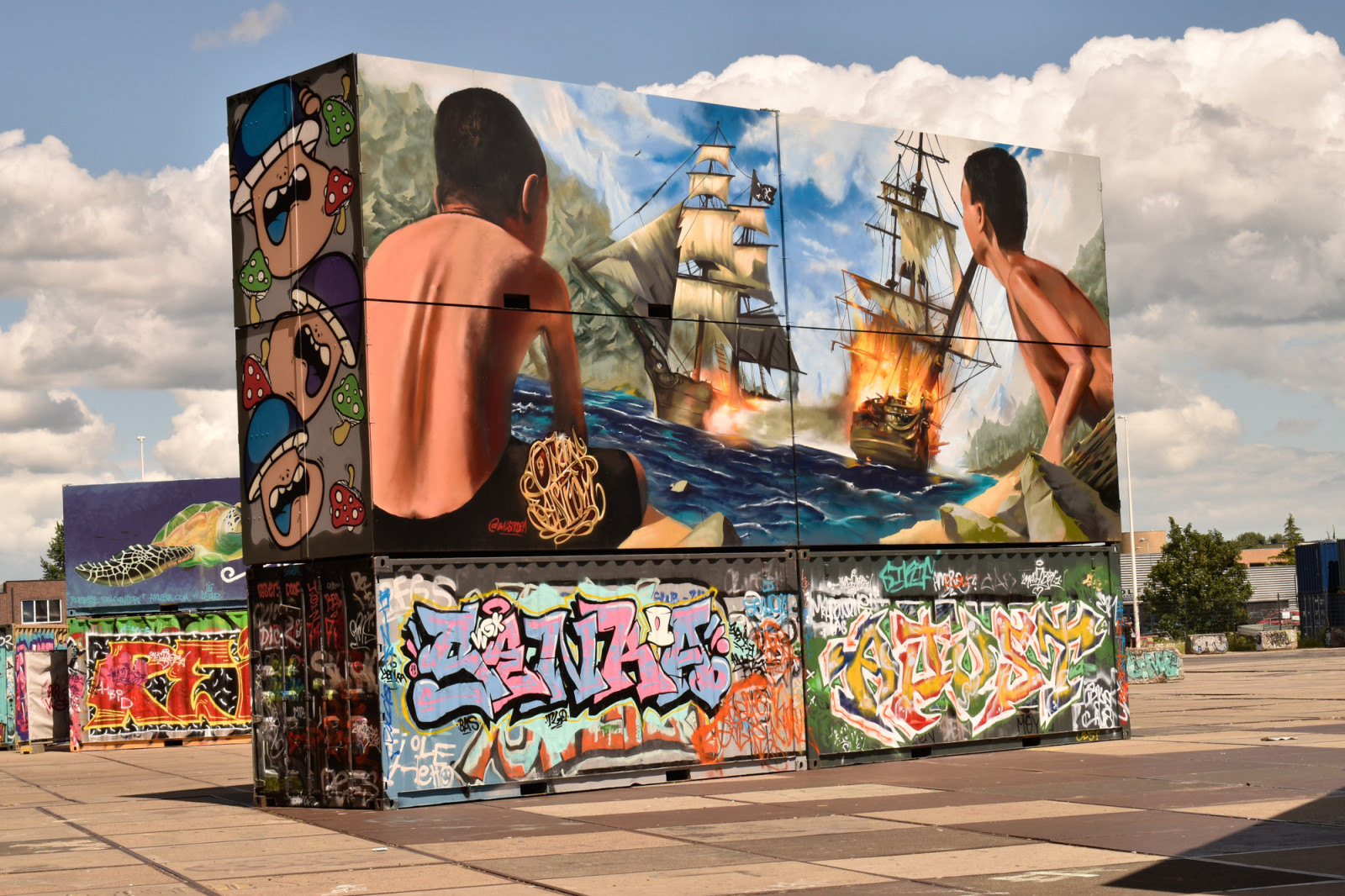 Sometimes you will find street artists working on a new piece or putting up a commissioned piece. We can combine their action painting by making portraits and meet the artists on-site and see what they are about. 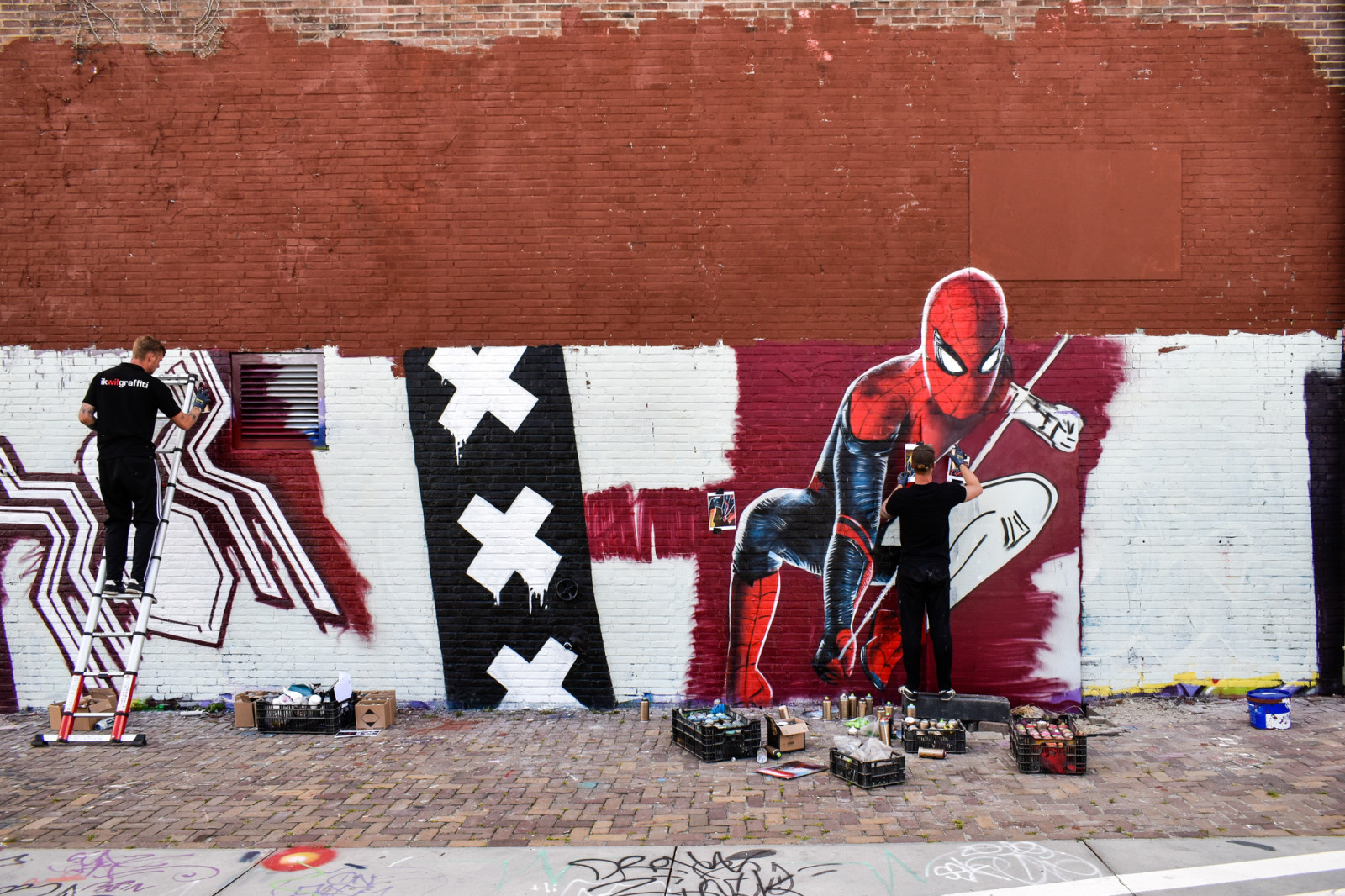 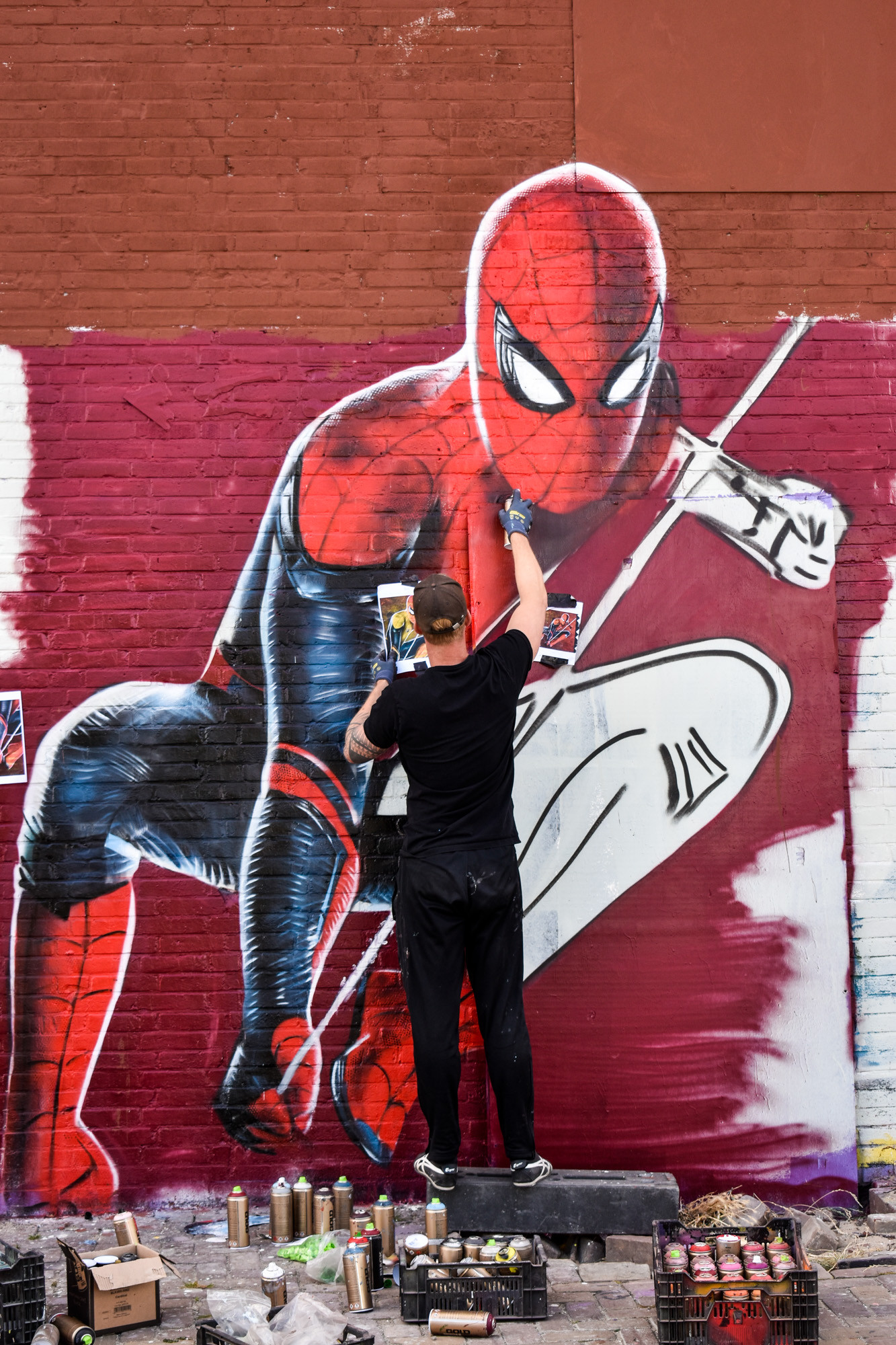 This is a beautiful way to explore more of Amsterdam and look for alternative places and see the city from a different perspective. What I like about Amsterdam is that each neighborhood has its own identity and character and history. 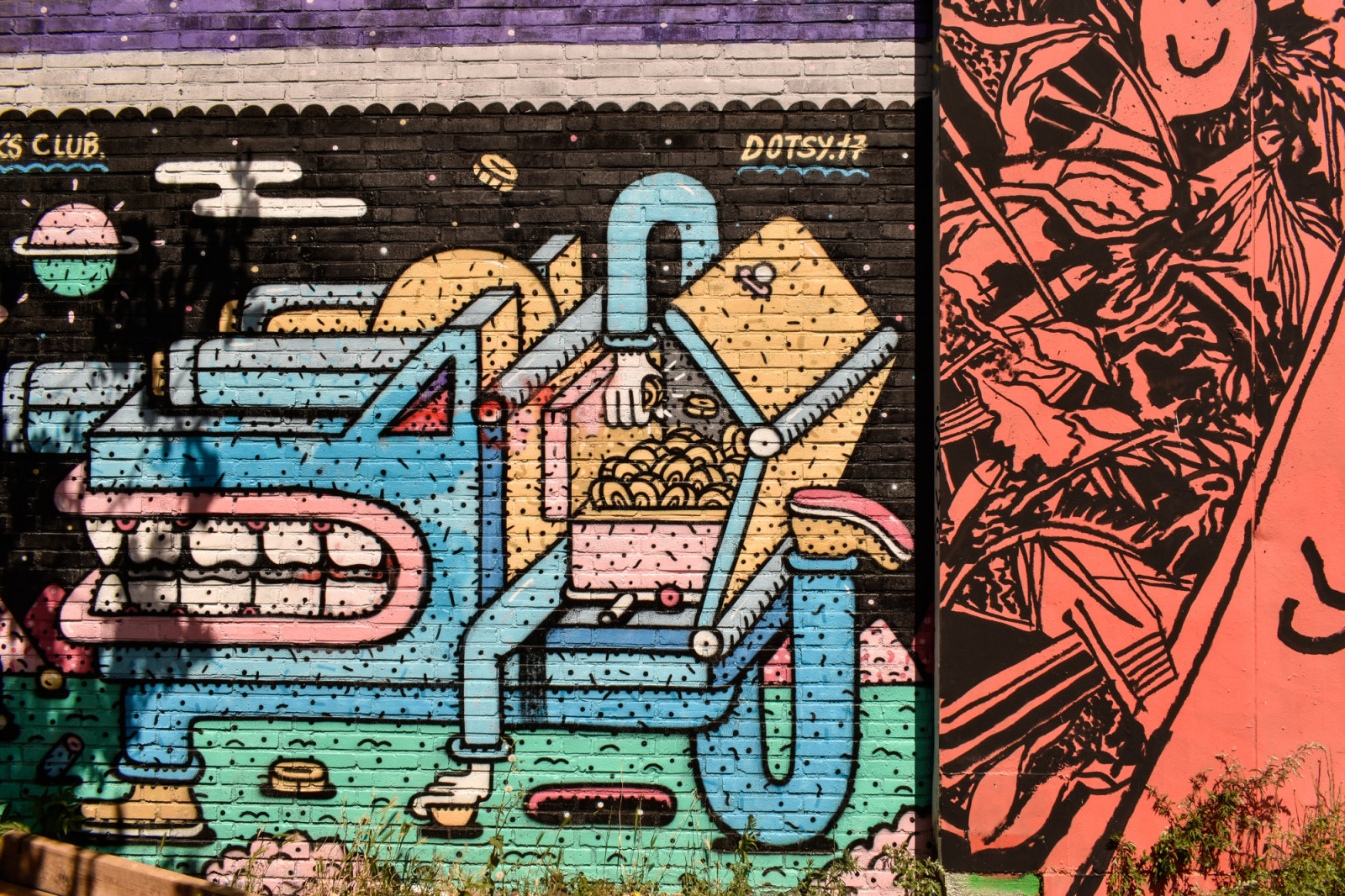 Most of all I like the Amsterdam east side part near the Flevo-park with its natural elements like parks, some wetlands and the vast bridge that has now also the function of a street art gallery. 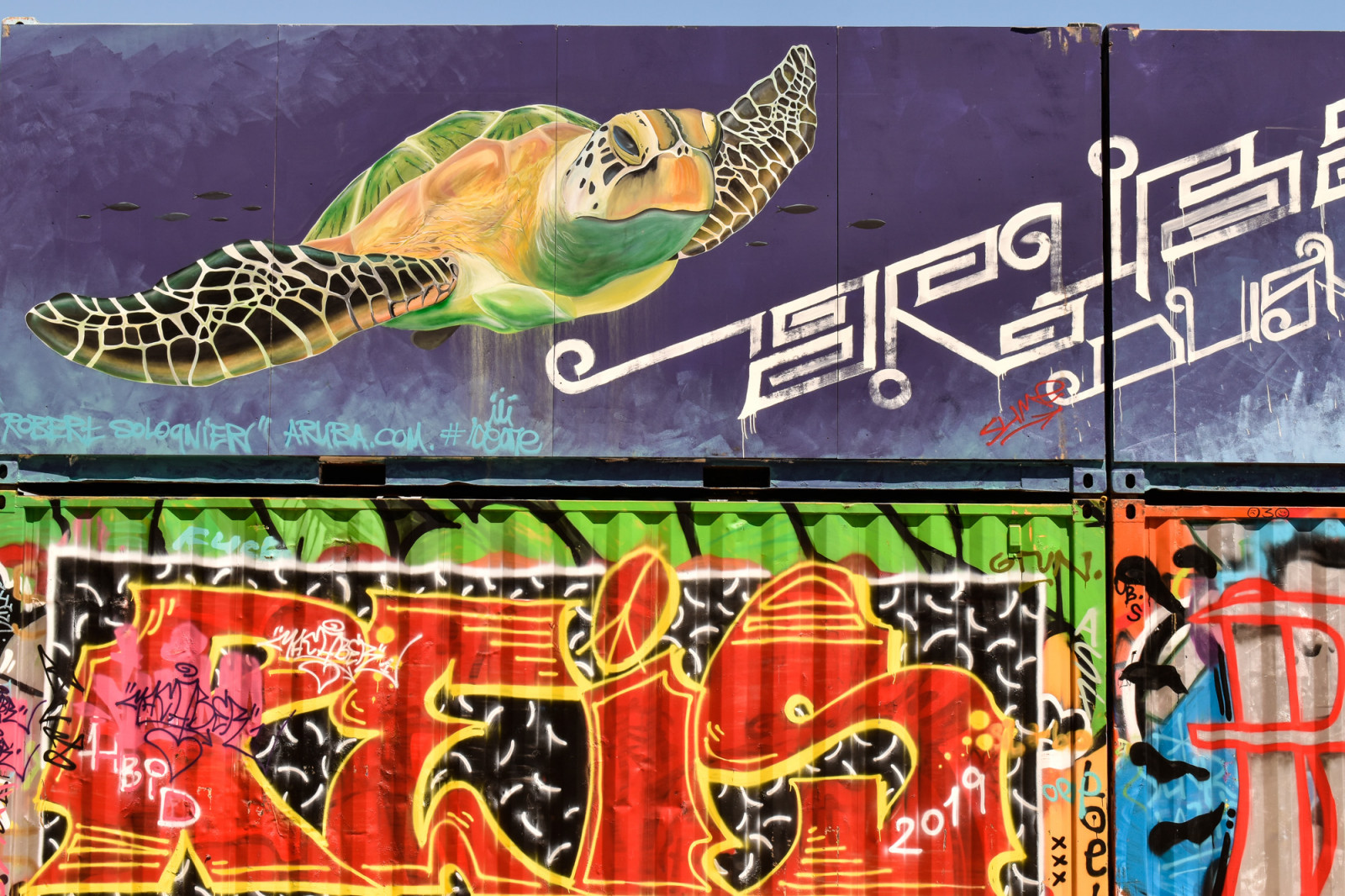 At the edge of town in Amsterdam East (Oost), there is an actual gallery of new painted urban street art under the Amsterdam bridge that links to Amsterdam North. 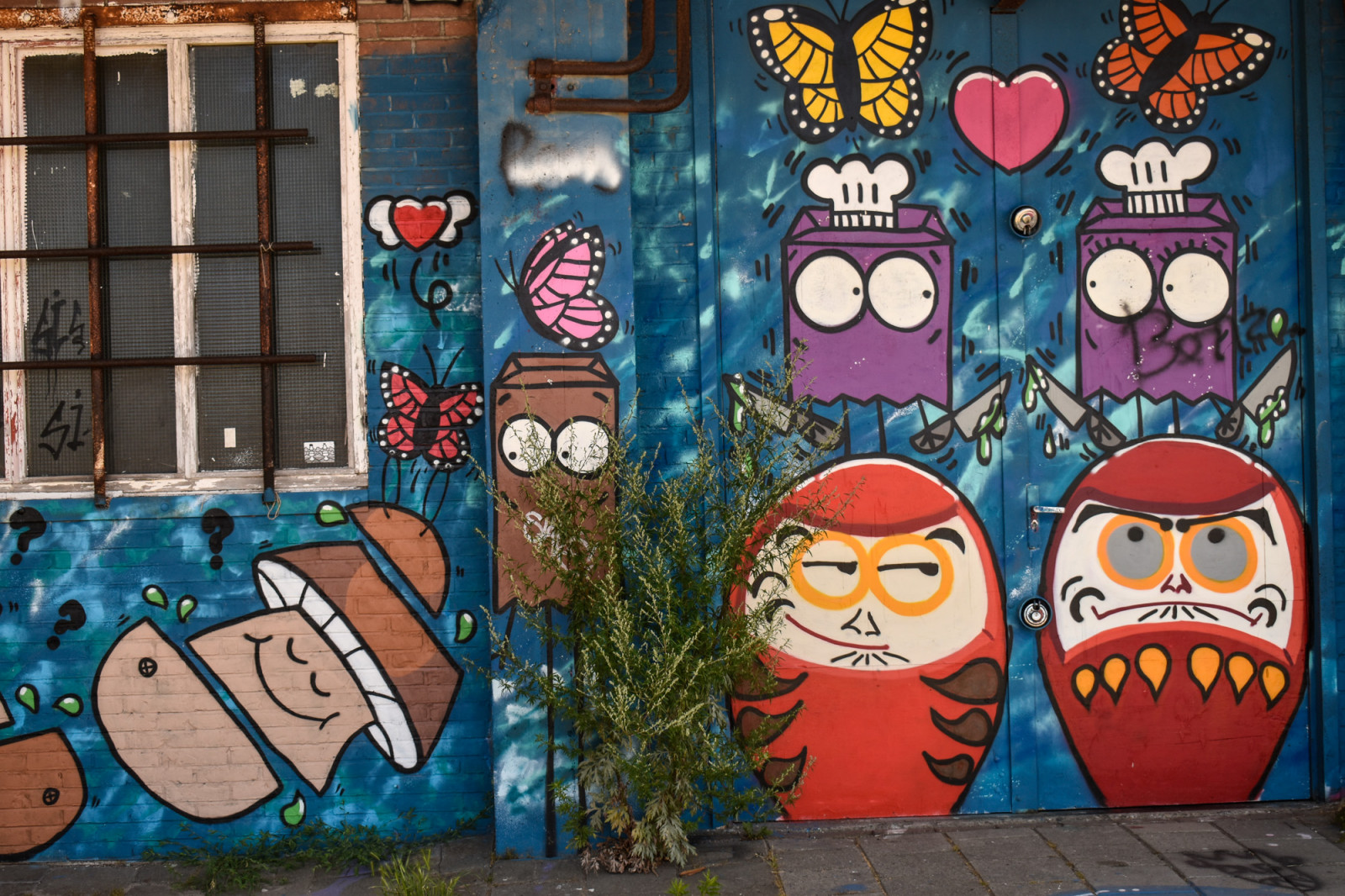 You can see artists working there often on huge murals and conducting workshops to kids and schools to learn to be creative with a spray can. That place on the edge of town has old dikes with historic houses and ancient churches in the small villages with wooden houses near a vast lake and the entry to the Amsterdam harbor. It won’t get more Dutch than that! 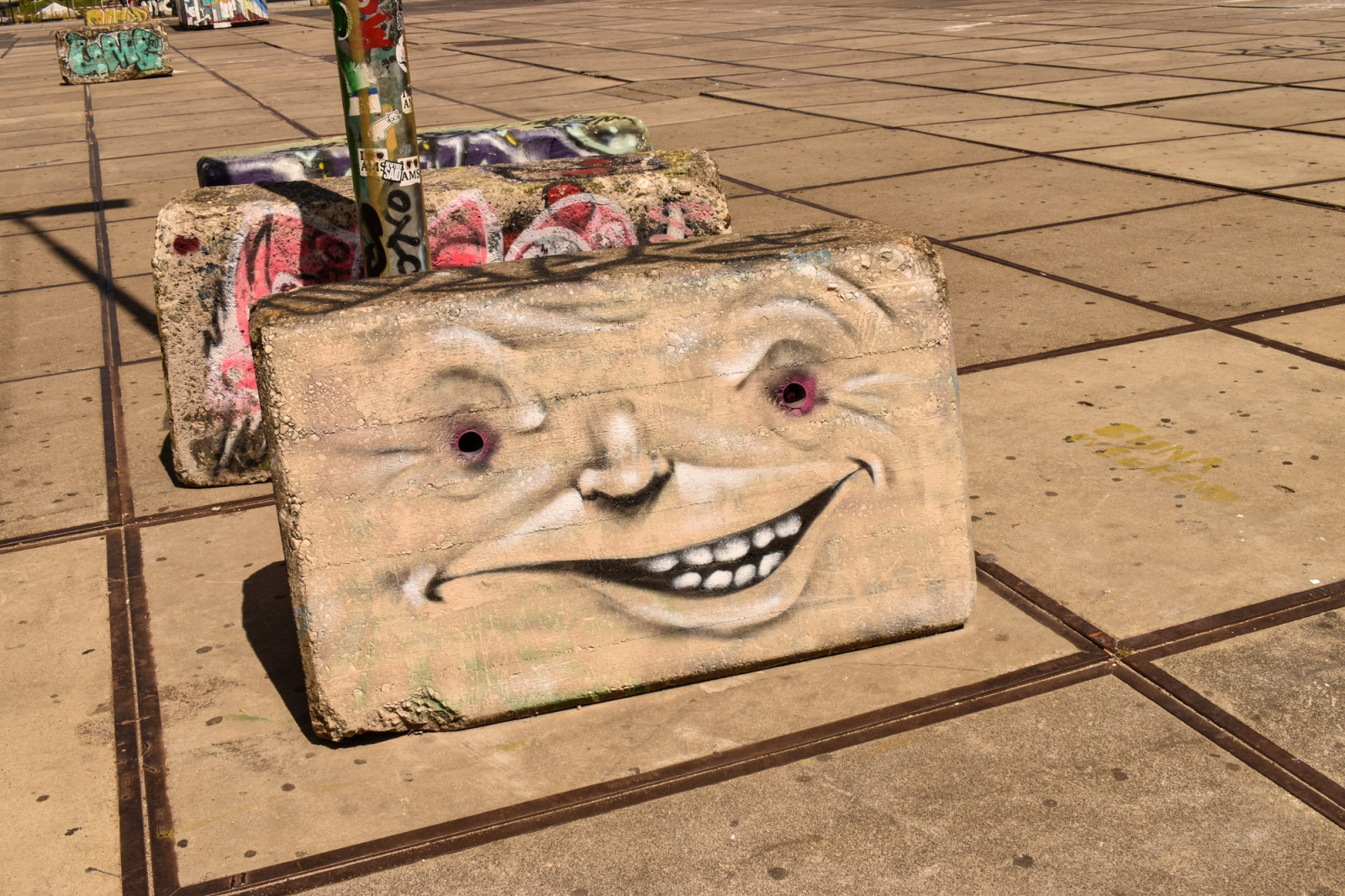 Amsterdam North at the NDSM wharf is also fantastic to see some massive street art, as this area has developed from an industrial shipyard into a squatter’s paradise. There the place is very dynamic. 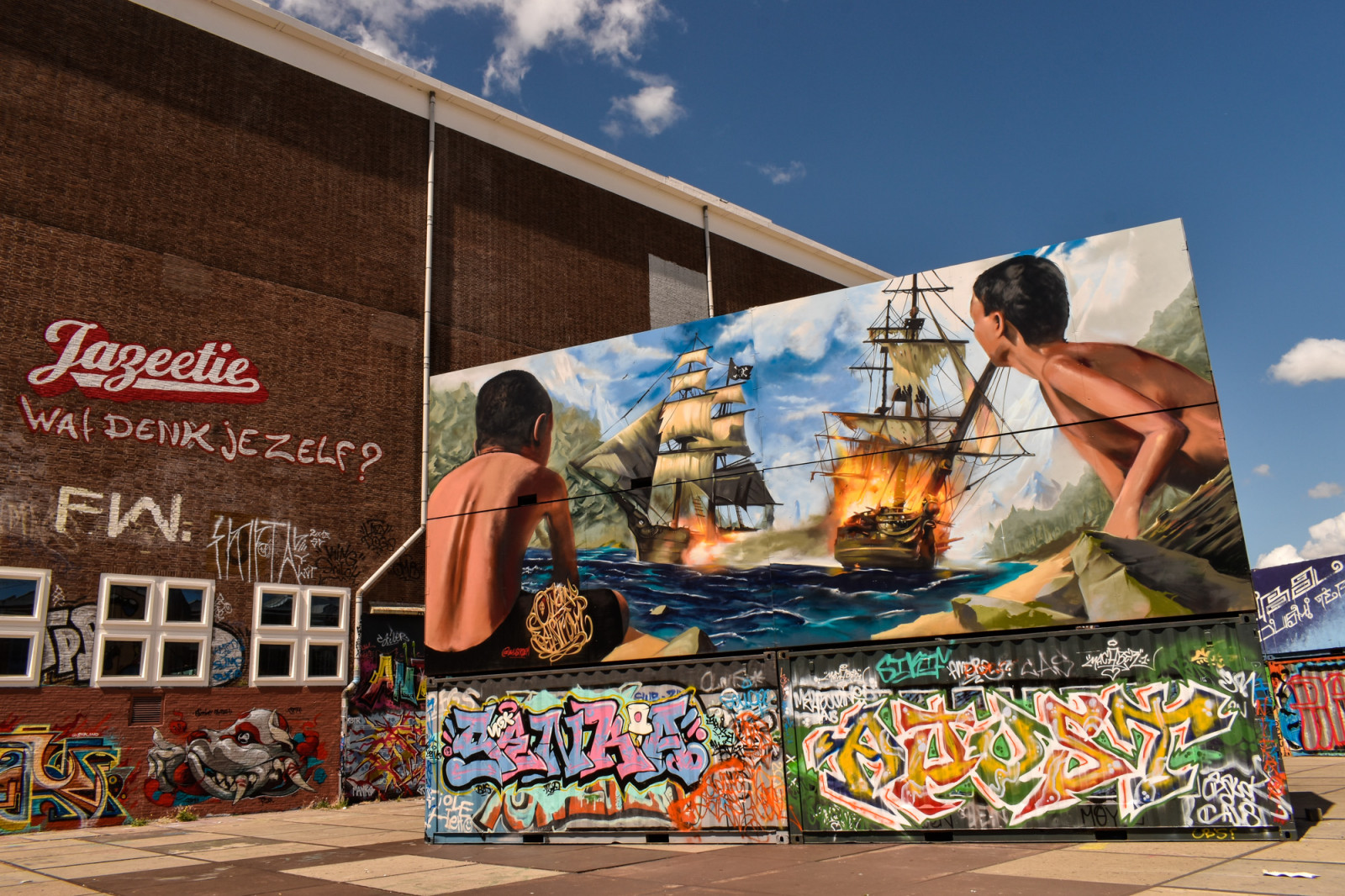 At least that is the feeling in the air now, and you can see Amsterdam city in the near distance over the water-Het IJ- while having a drink at one of the bars and restaurants nearby. Street artists are competing over the most spectacular work, and some are very grand, and some have that old ‘Skool’ feeling of rebellion and danger. 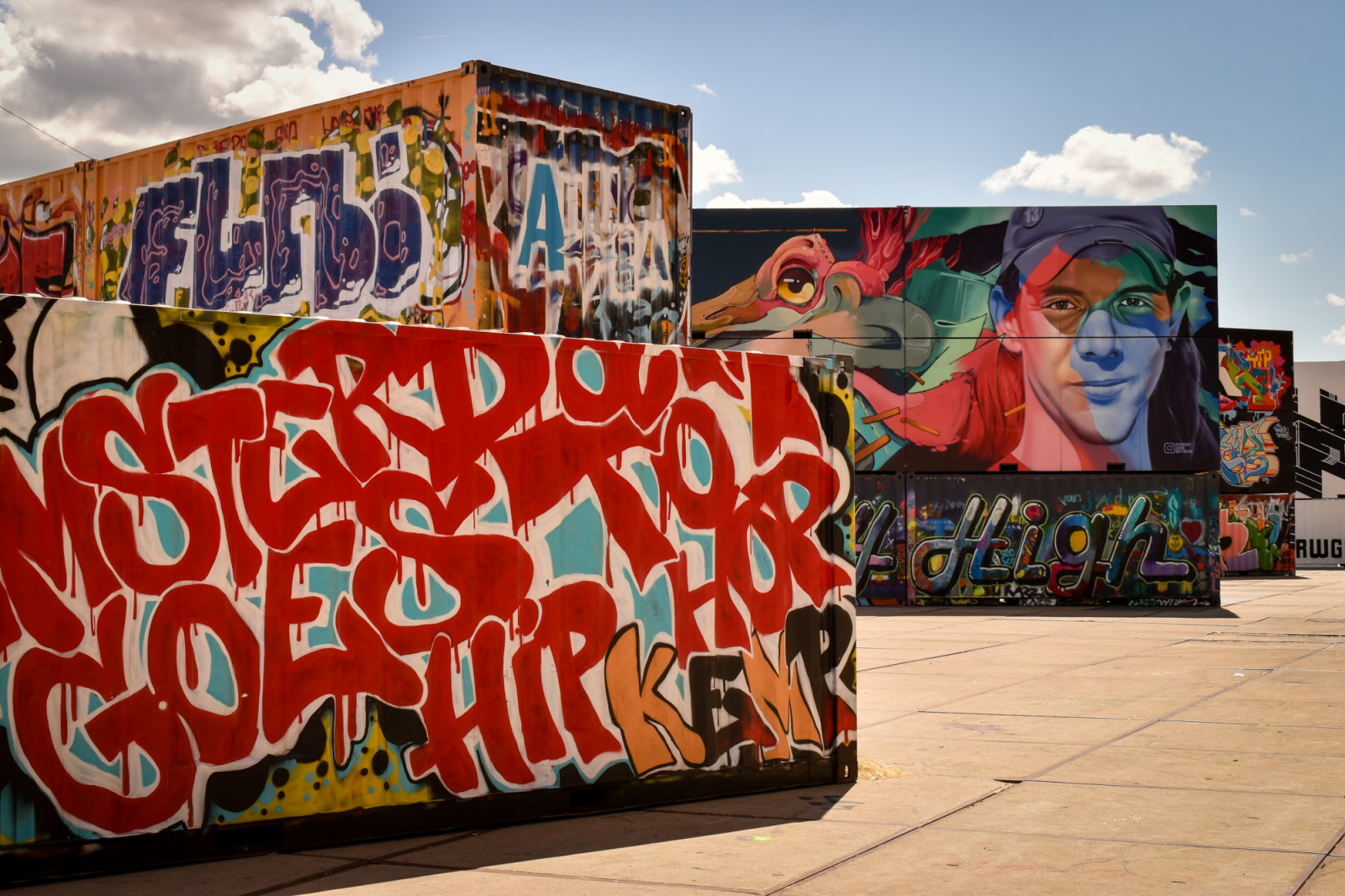 Can you become famous with urban street art?

One of the best graffiti artist and well respected Dutch Urban Artist Hugo Kaagman “The Stencil King” had seen it all happening in Amsterdam. When he started as a punk kid in 1975, he has made his profound mark on the 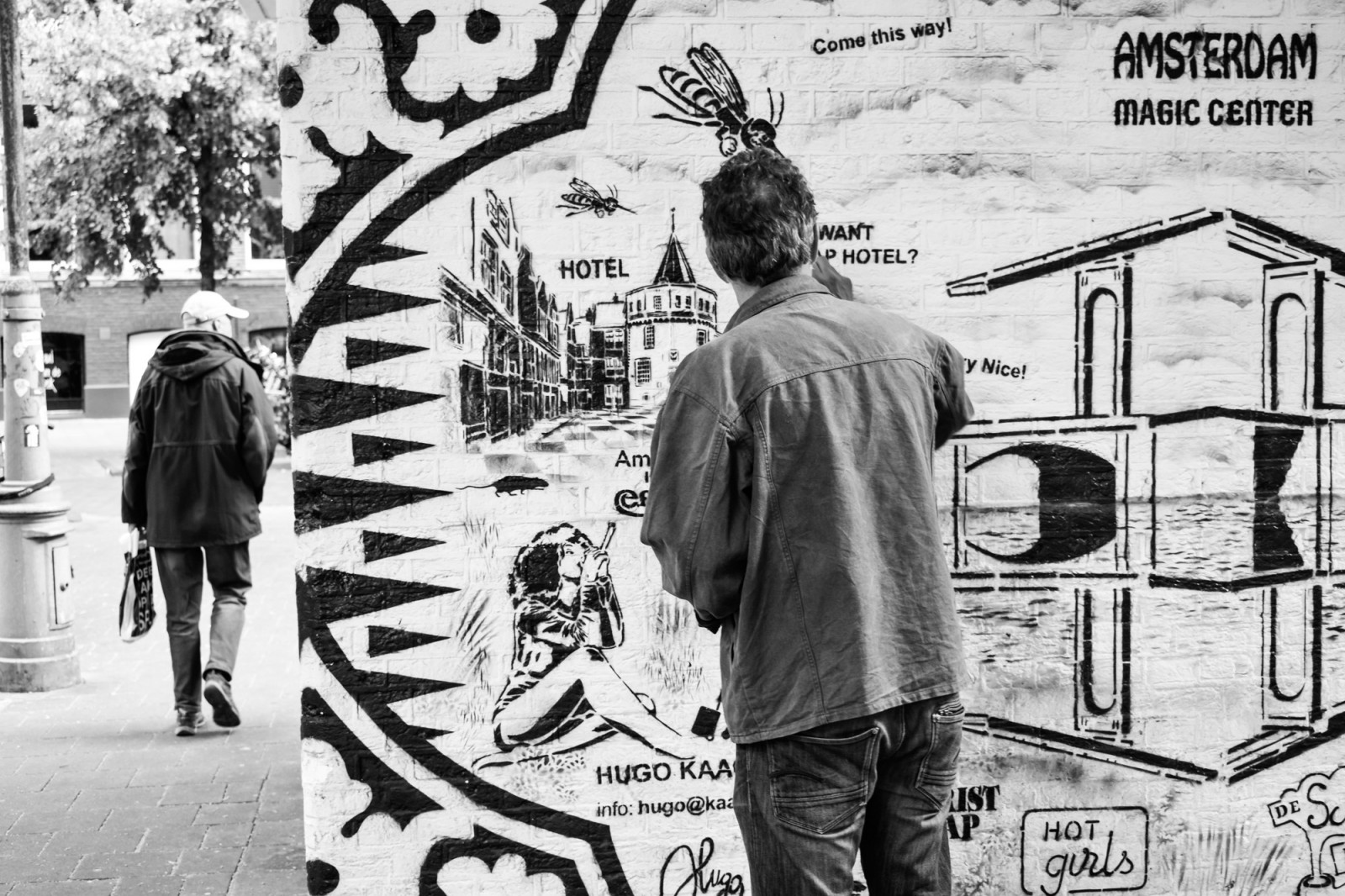 “The excellent art world still doesn’t know how to deal with urban street art; it is a parallel world, between museums and galleries and the streets. Only a few have made the cross over to the gallery and museum art world. 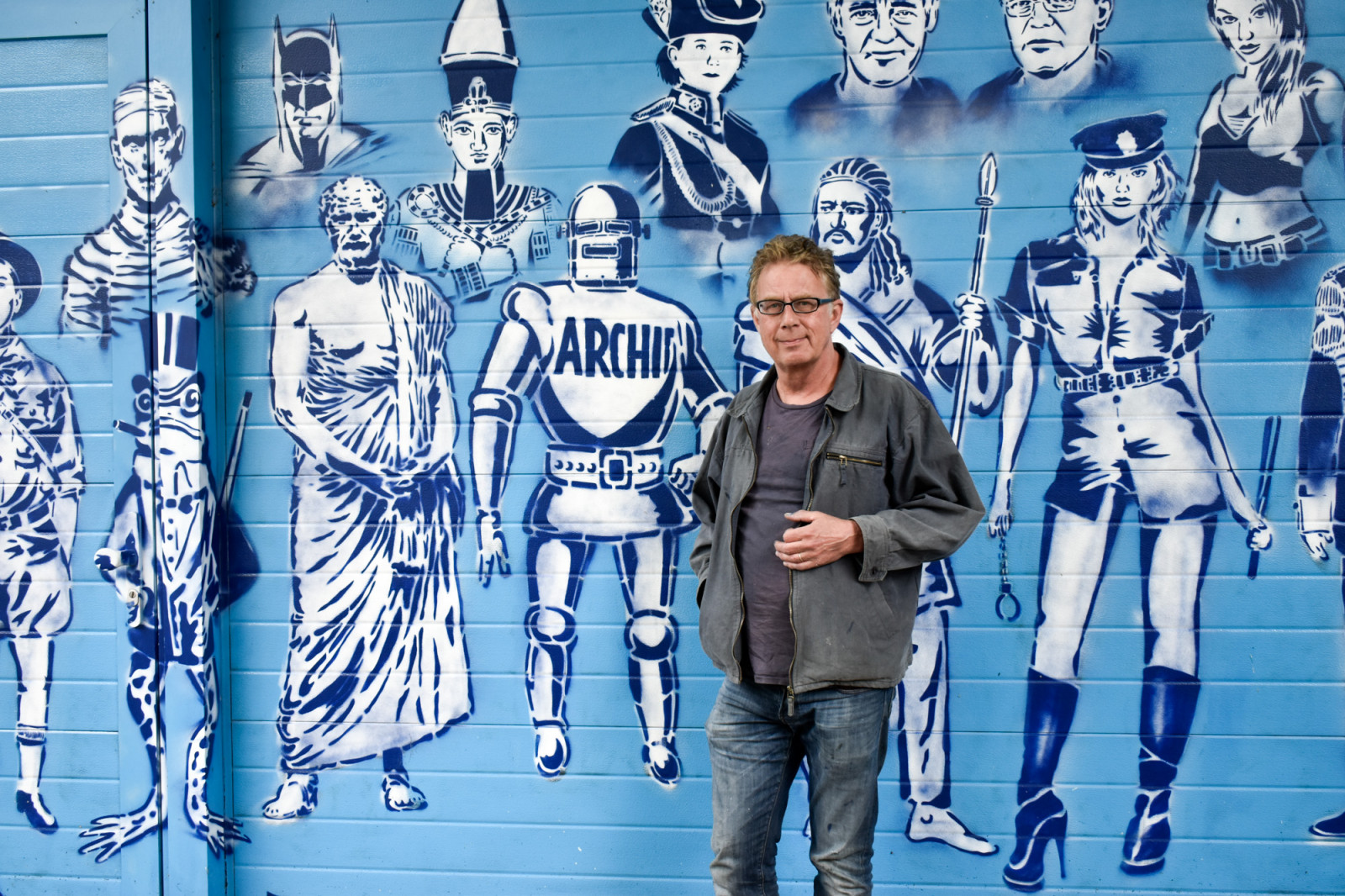 People like Jean Michel Basquiat or Keith Haring or now Banksy are being collected and sold for ten millions of dollars. Most of those early urban street artists are dead now. Some are being rediscovered like Richard Hambleton, “Shadow Man” is now re-discovered by his film about him and became famous after they are dead. 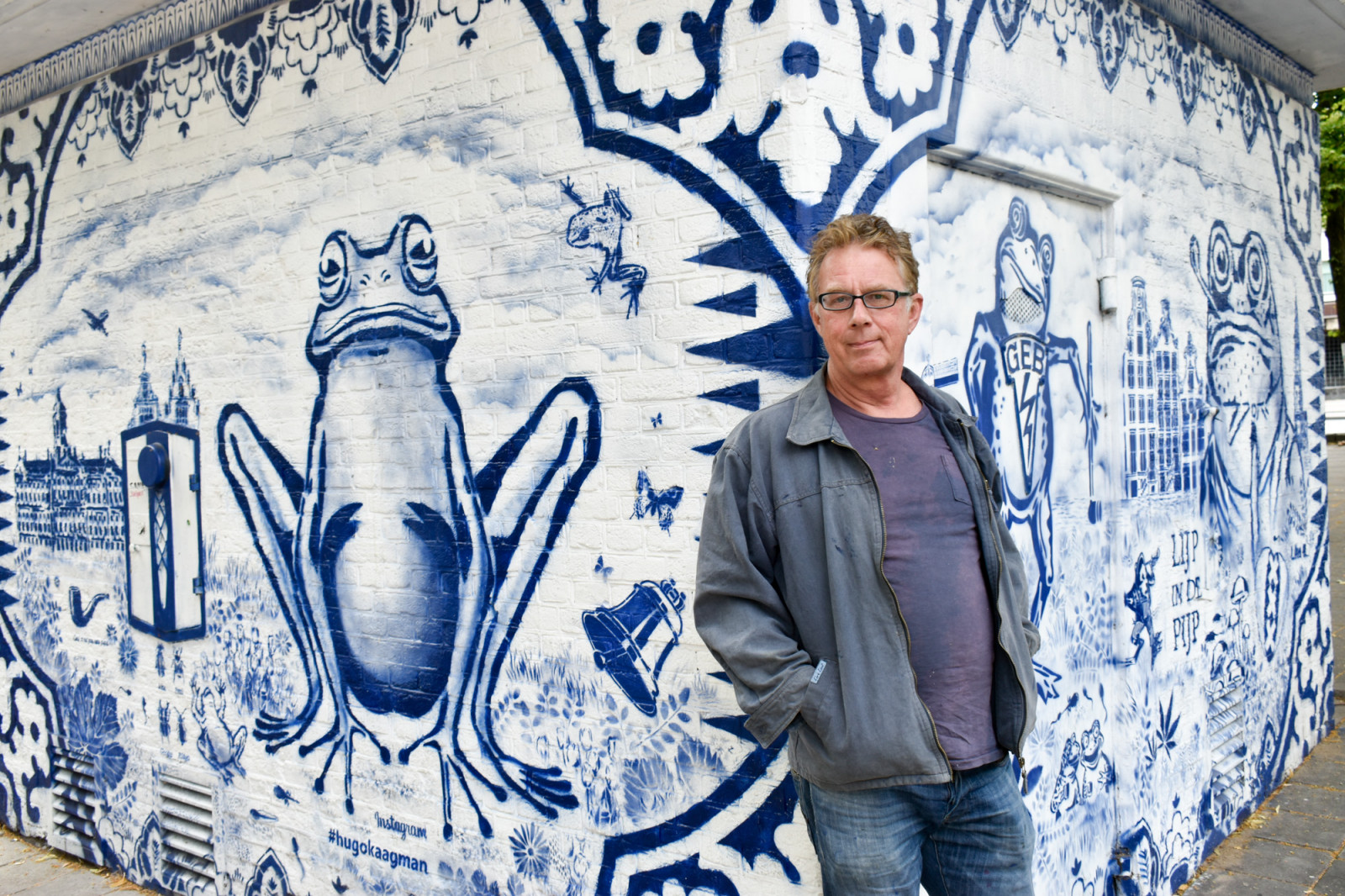 Kaagman adds; “Significant expositions are going on this year in New York and Singapore. Also, Berlin or Shanghai is fully engaged in the street art phenomenon. So yes, it's all still happening and getting more popular in places like Shanghai where the kids don’t like to go to museums. 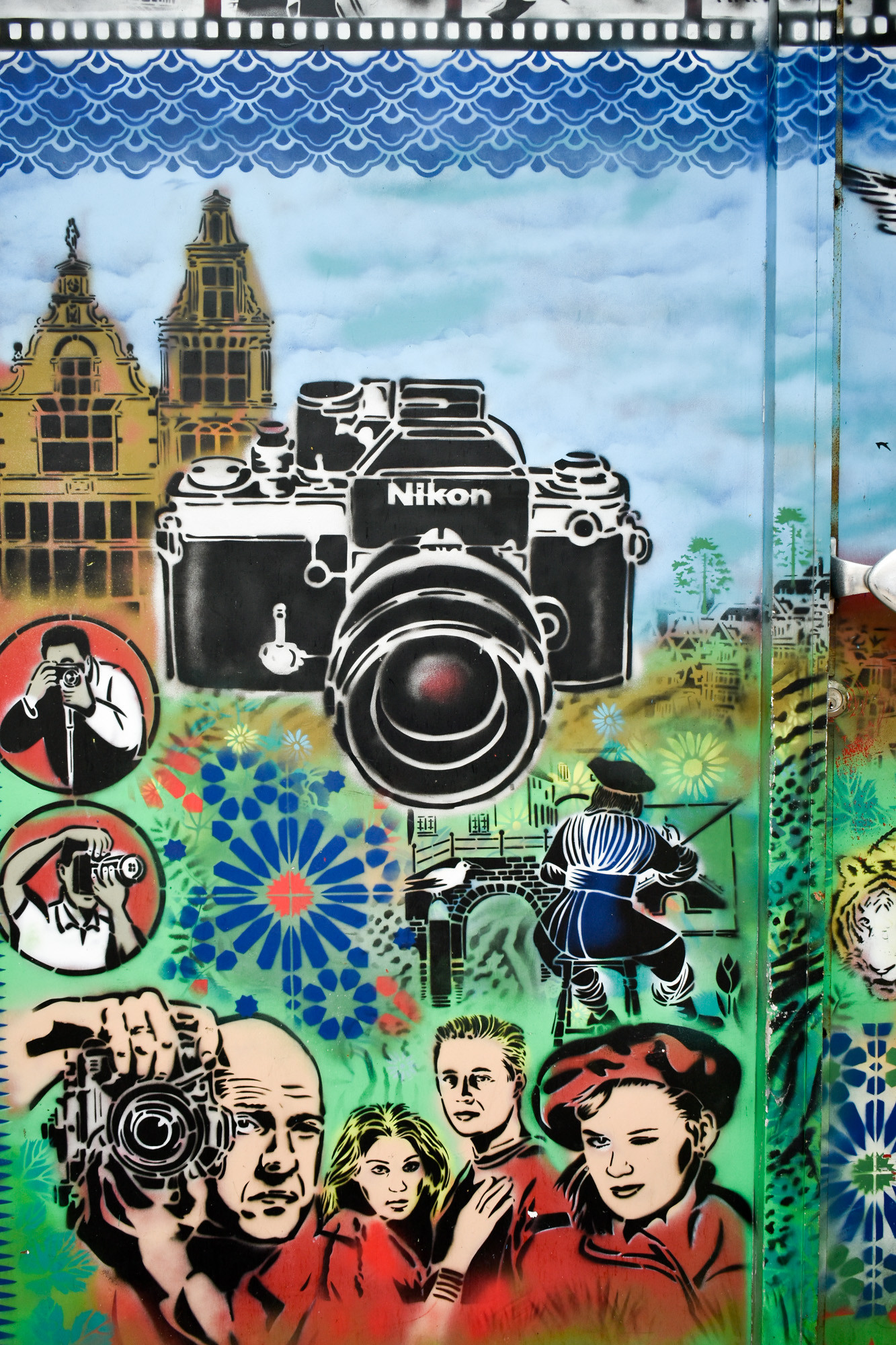 We were once on the forefront and the first in Amsterdam in the late 70s with Dr. Rat, Peter Klashorst. Everybody was into it then and myself at the Zebra House, a psychedelic punk gallery, sound studio, and punk newspaper collective squatter house. 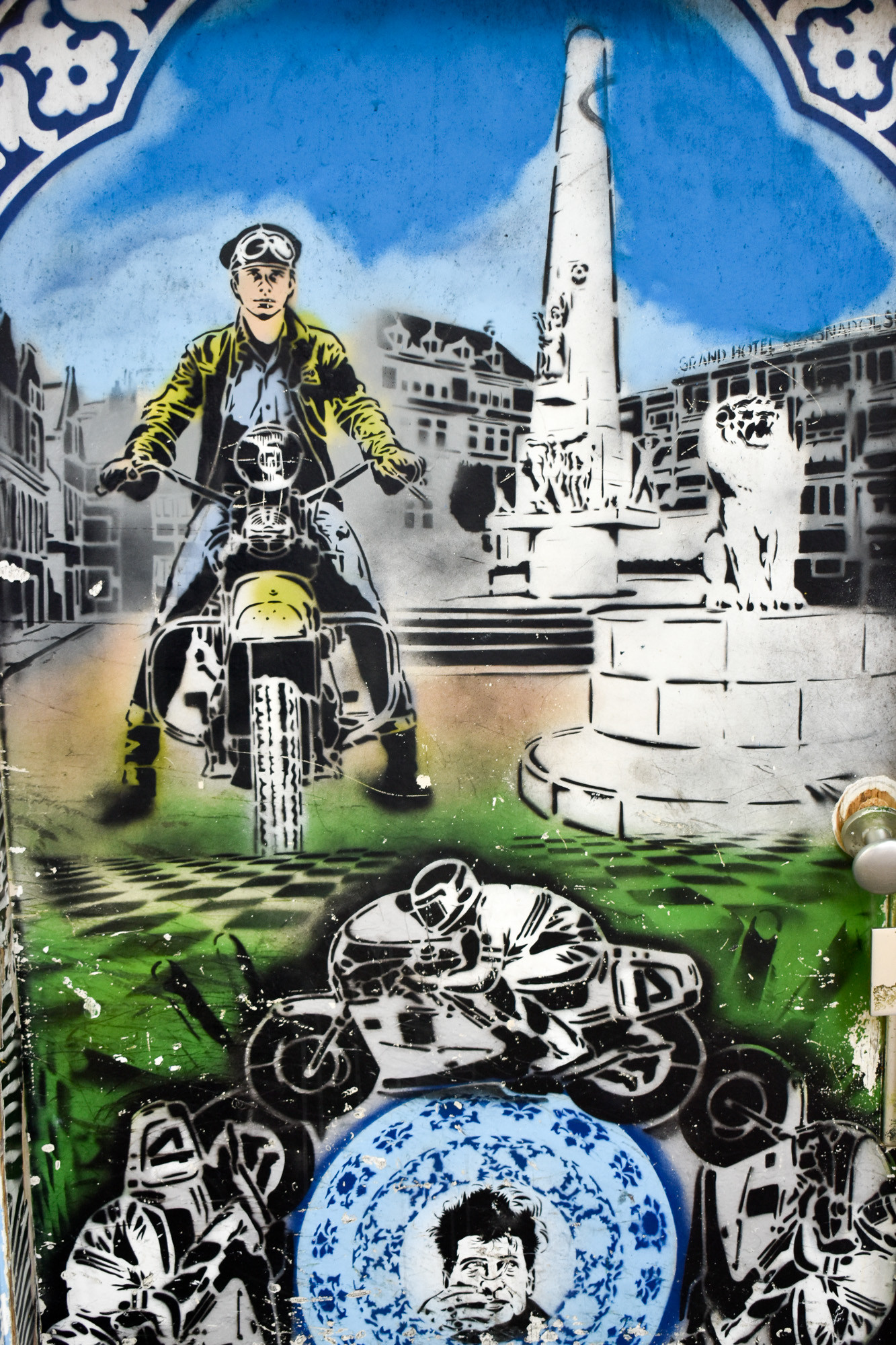 In the 80s Amsterdam was the capital of punk rock graffiti of the world or as it is now called Urban art. I just kept going with this, and it keeps me young until today, Kaagman is now 64. 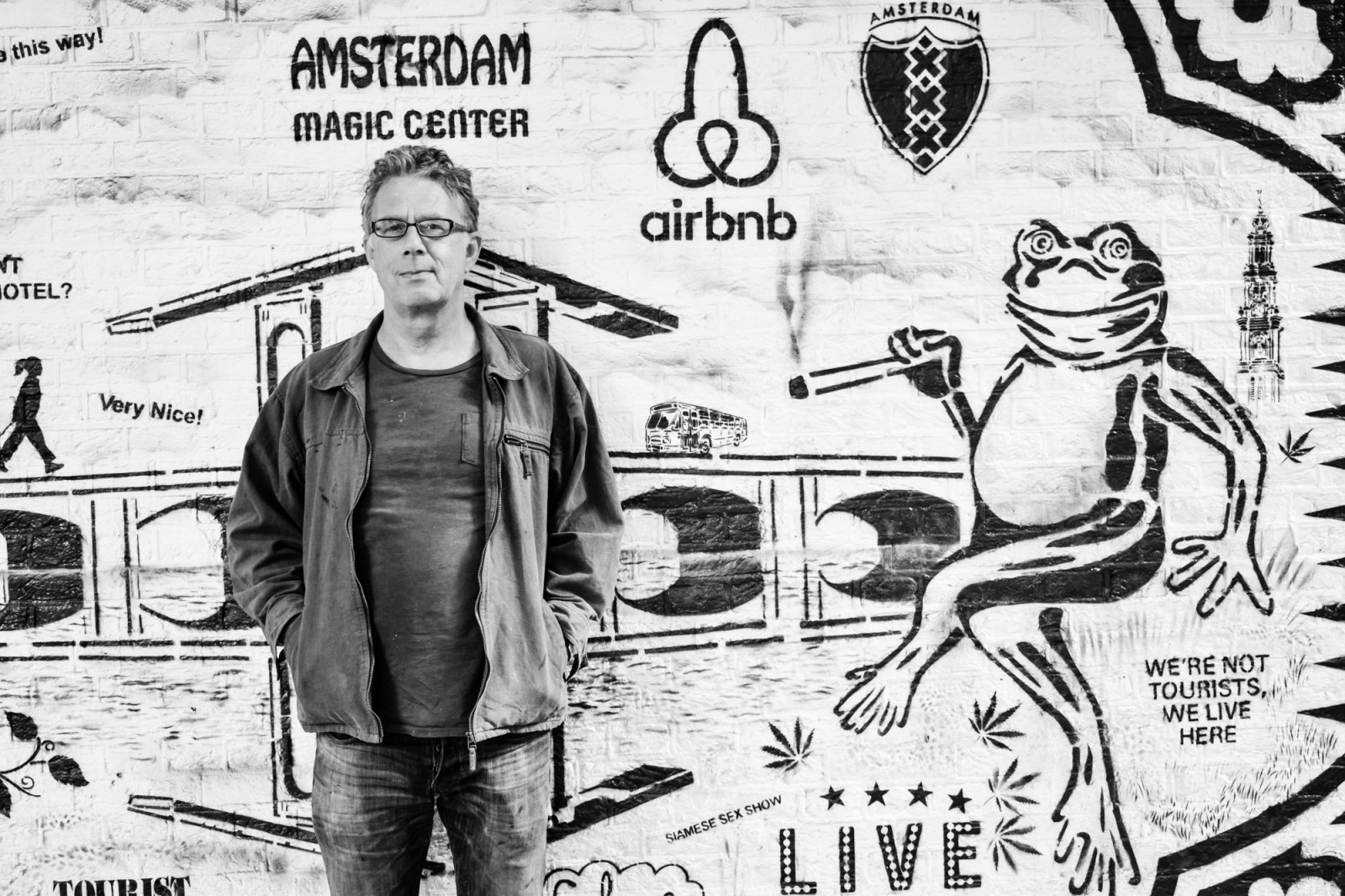 For the most visual artist, it all starts in the street, you get involved, and your work is right there to make a mark. When you paint at home, no one will see it, so it best to get exposure outside and get recognition or not.

Hugo Kaagman has made international fame with his Delft blue inspired motives and actual ceramics that in a way, combine the traditional Dutch pottery motives from the 16th century into the world of punk rock and anarchy. It still pleases Hugo to incorporate different layers and little hidden hints and jokes or messages within his work.

With so many decades of painting street murals and all kinds of urban settings like tunnels or bridges, even 18 Airplanes commissioned for British Airways were covered by his distinct soft blue patterns of lines and shapes and seen around the world at significant airports.

“I find it fun to contribute a part of my Dutch culture and create something new with it that is not only art but also commercial and still a real part of what I really like to show.”

A lot of artists use different styles like “tags” in fact, leaving your signature everywhere. Most start that way and then move on to try a different style or message.

Amsterdam Photo tours offer an exciting and fun Urban Street art and Urban landscape photo tour in and around Amsterdam. You can contact us here…